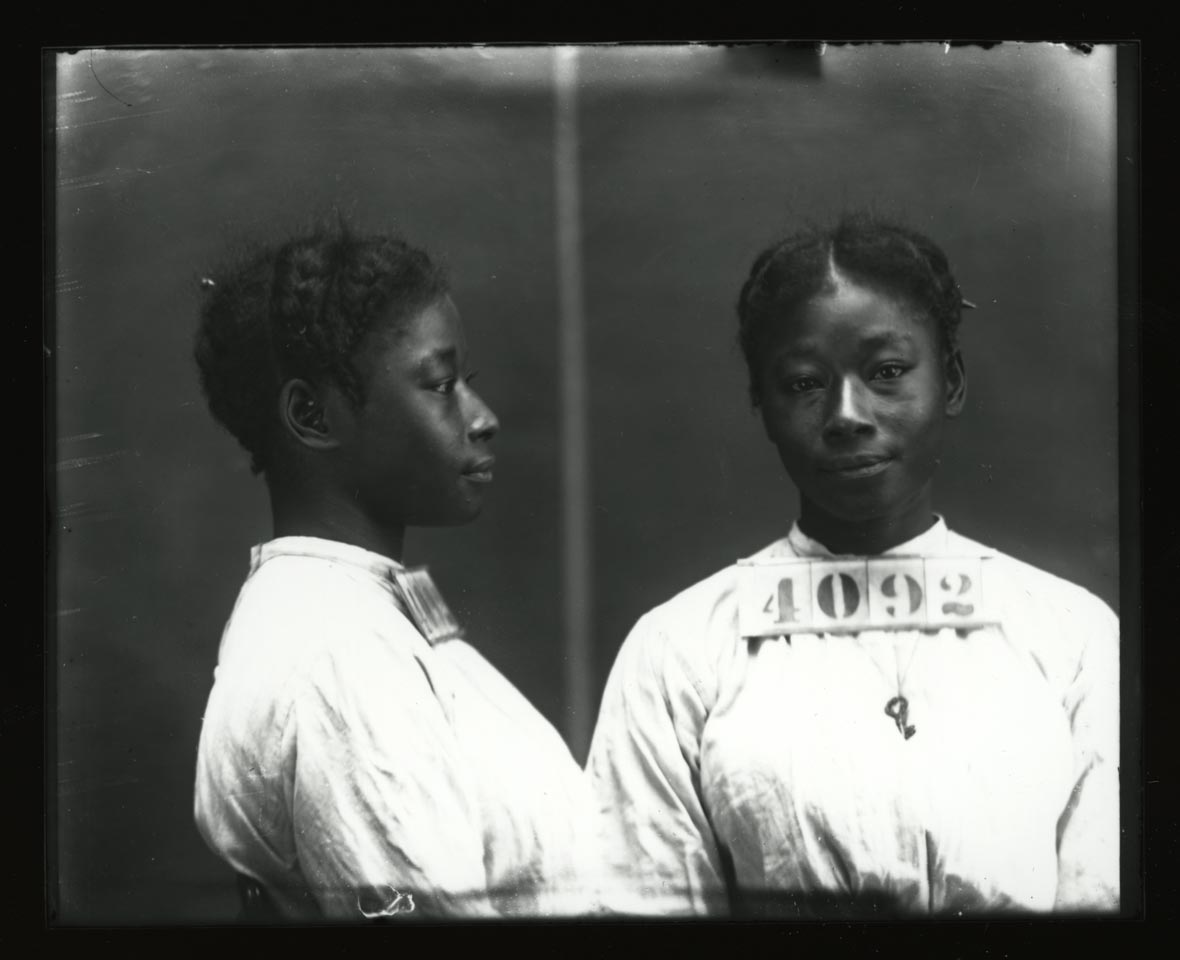 Born to Run: The Odyssey of Lizzie Dodson

Sixteen-year-old Lizzie Dodson was convicted of burglary in Fairfax County in 1897 and sentenced to five years in the Virginia Penitentiary in Richmond. After serving half her prison term, Governor James Tyler granted Dodson a conditional pardon on 24 March 1900 and she was discharged two days later.

The conditional pardon would not be the last time a sitting governor would intervene for Dodson, later described by the Richmond News Leader as a “dangerous character.” Her remarkable story of crime, clemency, and violence is one of many contained in the Virginia Penitentiary Records Collection, 1796-1991 (bulk 1906-1970), at the Library of Virginia. 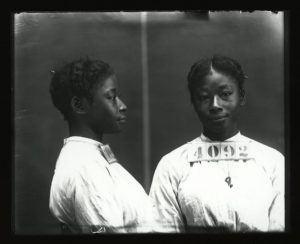 Photograph of Lizzie Dodson, No. 4092, probably taken soon after her 3 July 1900 return to Penitentiary.

In order to receive a conditional pardon under the 1897 law, a prisoner had to serve one-half of his or her term, have a good prison record, and obtain post-prison employment. F.B. Robertson gave Dodson a job at his grocery store in Richmond, but her freedom was short lived. On 5 June 1900 Dodson was found guilty of grand larceny and sentenced to three years in the Penitentiary (she also had to serve the remaining time from her first conviction and five additional years for her second conviction). Dodson was the first prisoner ever to violate a conditional pardon and returned to the Penitentiary.

Dodson’s stay at the Penitentiary was brief. At 5:30 a.m. on Christmas Eve 1900, Dodson, clad only in her underwear, used a bench to climb over the west wall of the prison and escaped. The Richmond Dispatch reported on 25 December 1900 that Dodson “said that after getting out of the prison she meant to don men’s clothes and jump in a freight. There can be no doubt that Lizzie needs more clothes than she has on.” Dodson remained on the run until April 1901 when she was recaptured in Fairfax County by Deputy Constable Charles Pierpont. She did not go quietly. The Alexandria Gazette reported that Dodson “proved to be a veritable amazon” and fought Pierpont “like a tiger.” During the struggle, Dodson pulled a pistol hidden under her shawl and shot Pierpont in the groin. Dodson was convicted of malicious shooting in Fairfax County and given a five-year sentence. Since this was her third conviction, Dodson was sentenced to life in prison. When Dodson returned to the Penitentiary in November 1901, she was not alone. During her brief period of “freedom,” Dodson became pregnant. She gave birth on 2 September 1901 in Fairfax County to a son, Junius Raymond Dodson. Under Virginia law an infant could accompany and stay with an inmate until he or she turned four years old. At that time, the child would be returned to the locality from which the mother came for disposition by the courts. 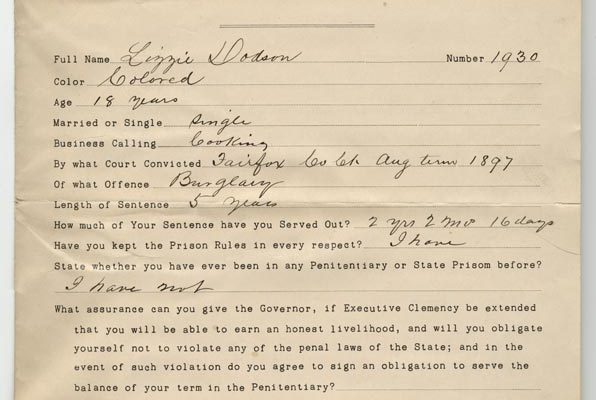 Application for a Conditional Pardon (pg. 1) 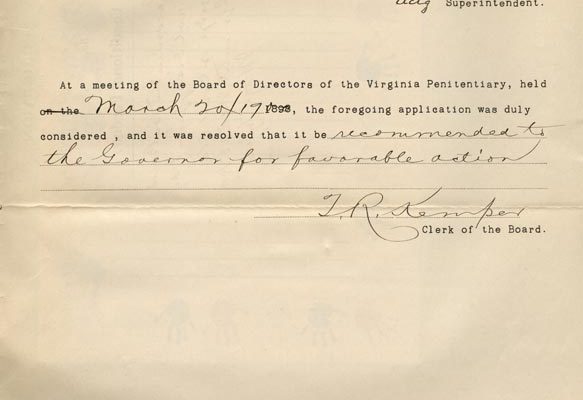 Application for a Conditional Pardon (pg. 2) 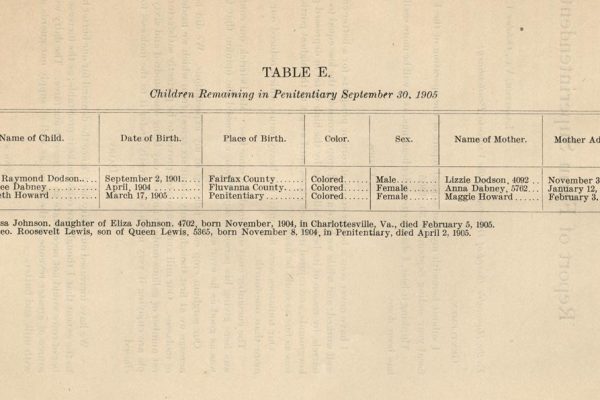 Annual report of the board of directors 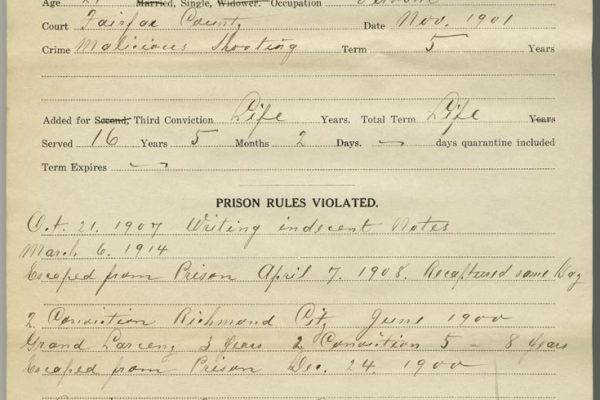 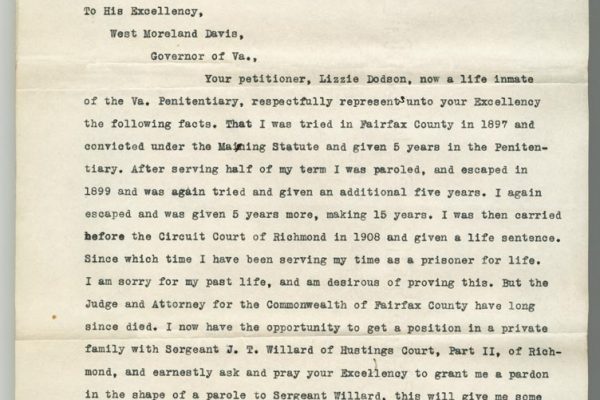 Now serving a life sentence, Dodson had nothing to lose and attempted to escape again. On 7 April 1908 she used a hook to dig through her wall into an adjoining cell. The cell door had been left open while it was being whitewashed. Dodson stole the keys from a sleeping guard and escaped from the building. She broke her ankle while climbing over the west wall and was recaptured. After her failed escape attempt, Dodson seemed resigned to her fate. On 24 April 1918 she petitioned Governor Westmoreland Davis for a conditional pardon asking him “to grant me a pardon in the shape of a parole to Sergeant [J.T.] Willard, this will give me some freedom and enable me to live a better and more useful life.” Willard, Sergeant of the Richmond Hustings Court, Part II, offered to employ Dodson in his home. However, Dodson’s letter omitted any reference to her 1901 malicious shooting conviction. “My only act of crime,” she wrote, “save escaping, was for the original 5 years, and I promise if paroled to Sergeant Willard to obey the conditions there-of and to do my best to be a better woman.” Davis granted Dodson a conditional pardon on 25 May 1918. I have been unable to find out what happened to Dodson after her pardon.