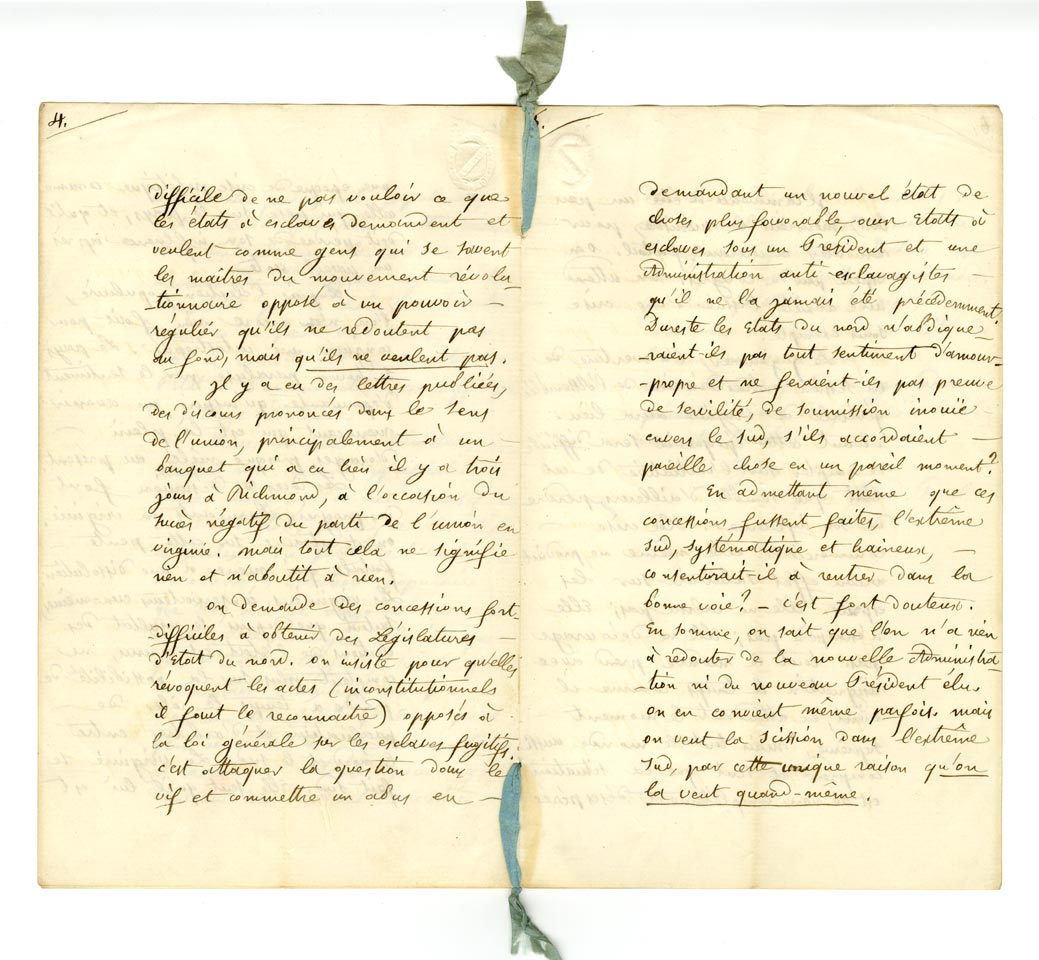 The secession crisis: A Frenchman’s view of the "whirlwind"

“The indecision and the absence of energy in the convention of Virginia which does not dare proclaim itself either for or against secession have ended by making the situation intolerable for everyone,” wrote Alfred Paul, the French consul in Richmond, in March 1861.  “This lack of spontaneity after the inauguration of the new administration destroys the sympathies of the two sections, North and South, toward Virginia.”  Paul closed his report of 9 March thusly:  “all that the convention has done up to the present can be summed up in three words or in a single word: nothing, nothing, nothing.”

This year marks the 150th anniversary of the secession crisis and the commencement of the Civil War.  Among The Library of Virginia’s many collections concerning secession and the war is the Alfred Paul Reports, 8 December 1860-9 March 1861 (Accession 22992).  Paul proved to be a keen observer of events in Virginia during the Winter of 1860-1861, providing the French government with valuable analysis of the state’s actions during the secession crisis.  [Note: The original reports are written in French; English translations are provided by the Library.] 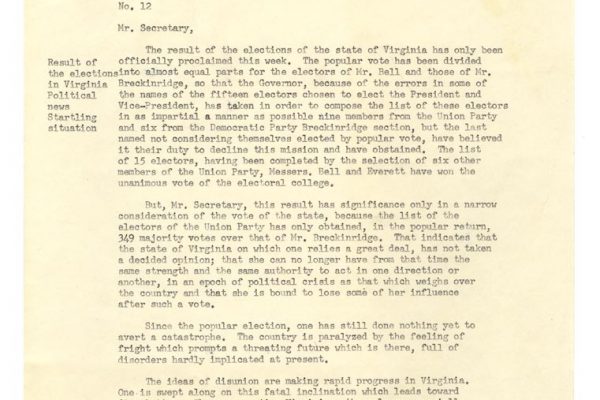 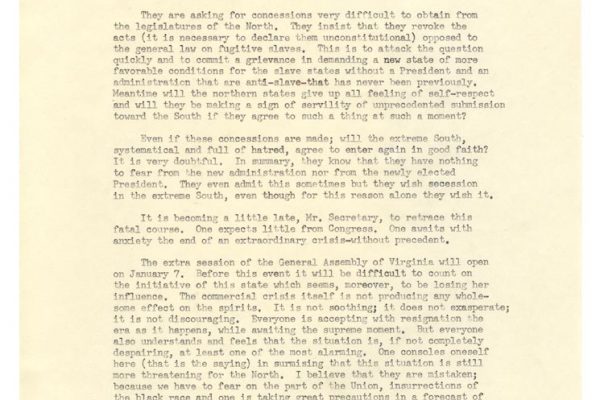 Southerners, Paul stated, “want secession.”  South Carolina seized on the election of Abraham Lincoln to leave the Union, even though Lincoln had been “called to the presidency of the United States…in a general election, regular, legal, constitutional, in which the South has taken part, whose results are incontestably valid, acceptable, and unassailable.”  He pointed to slavery as the cause of the breakup.  “[S]upporters of slavery, over excited…by the steady success of the Republican Party in the last elections,” were determined to shatter “all which makes up (in the eyes of Americans) the perfection of a model government…because the new and next administration considers not to destroy slavery there where it exists, but to prevent its extension.”  In Paul’s opinion, Southern states believed they would create a slaveholding utopia, but they did “not see that the question of slavery will always be what it is.  [They surmise] that all will be well then, that the slaves will be submissive and satisfied, that the abolitionists will stop, that the Republican Party will have no other reason for existing and will disappear to reappear no longer.” 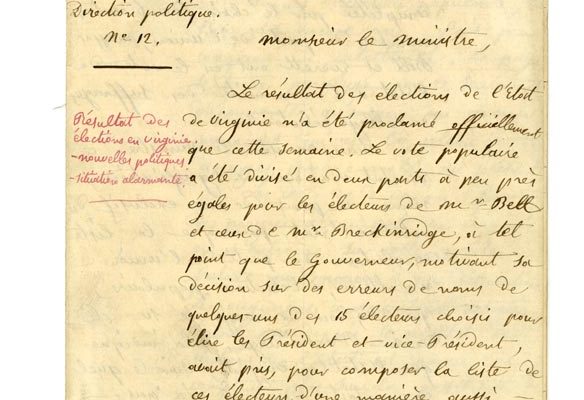 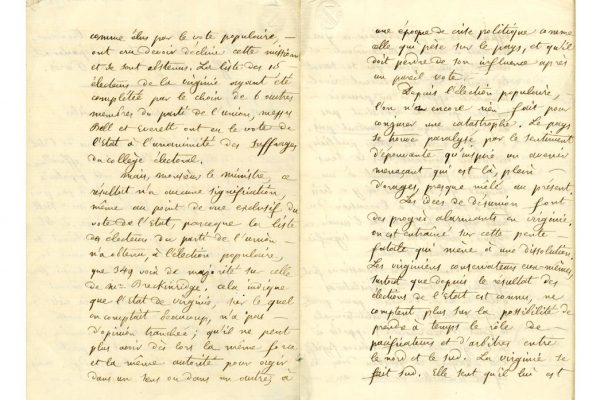 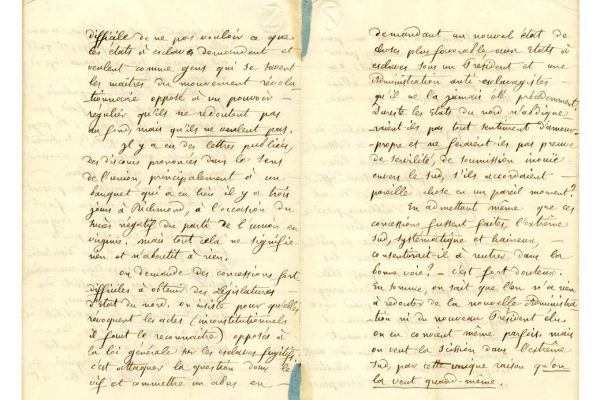 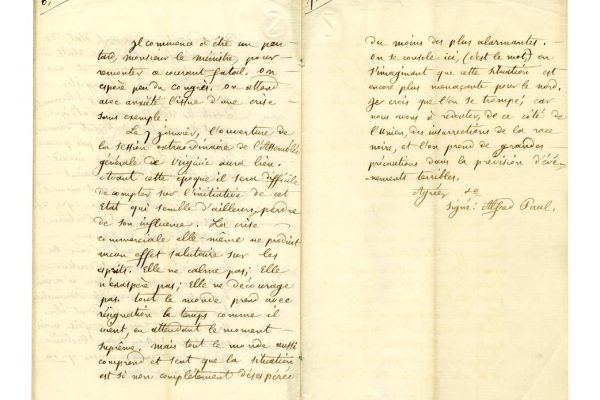 Secession, Paul predicted, would result in civil war.  “And the end of this civil war certainly can not be foreseen by anyone when the first cannon blow will be understood as the signal of a catastrophe intended by this stronge [sic] people, ready to commit suicide amidst a prosperity without precedent, but a uniquely material prosperity, which has not been accompanied in its very rapid advance by moral progress[.]”  And Virginia, which could have perhaps prevented this outcome had she acted “with energy and prudence,” was led into “the whirlwind of events [that] seems to be obliged to hurry along this state in the whirlpool like all other slave states.”

Paul remained in Richmond for the rest of the war, serving as the French government’s representative to the Confederacy.  Originally believing that the South could win, by 1863 he was informing Paris that the South could not achieve success by military means.  While the Library’s collection of Paul’s reports ends in 1861, he continued to make detailed accounts even as Richmond fell.  His observations of the evacuation of Richmond by the Confederacy, and its subsequent occupation by the Union Army, are examined in an April 1965 journal article. (See Warren F. Spencer, “A French View of the Fall of Richmond: Alfred Paul’s Report to Drouyn De Lhuys, April 11, 1865,” Virginia Magazine of History and Biography vol. 73, no. 2 ).

For more on the Library of Virginia’s collections of Civil War material, see: