Fraternal orders.  Military regiments.  Agricultural societies.  Women’s organizations.  Religious associations.  Political parties.  Schools.  The Library of Virginia houses more than 650 collections of organization records from a variety of groups.  Ranging in size from one leaf of paper to over 70 cubic feet of material, these collections contain accounts, agendas, architectural drawings, correspondence, financial records, minutes, photographs, programs, reports, schedules, and other papers that detail the goals and histories of these groups.  Organization records include other types of media, including audio recordings in reel-to-reel tapes, cassette tapes, and CDs; video recordings in cassettes and DVDs; and even archived websites.  Now, information about all of these collections is gathered in the Organization Records Guide, an on-line resource located on the Library of Virginia’s website.

The guide is organized alphabetically by organization name and includes a letter index at its top to facilitate searching.  Each entry contains the name of the organization, the title of the collection (whether records, account book, etc.), date range and size, accession number, a description of the material, and whether the materials are originals or copies.  Entries link to catalog records and, where applicable, to on-line finding aids and databases created for the collections, or to archived websites.  The Organization Records Guide will be updated on a regular basis as new collections are added to the Library and catalogued.  Jason Roma and Doc Frank of the Library’s IT department provided the necessary technical work to make the guide a viable and valuable on-line resource.

One of the smaller-sized but interesting organization records collections is the Petersburg Classical Institute records, 1838-1847 (Accession 23479).  The Petersburg Classical Institute was incorporated by the Virginia legislature on 4 April 1838 to serve as a “classical school in which the higher branches of a liberal education will be taught.”  The collection is not very large, consisting in part of tuition receipts and letters of recommendation for William F. Spotswood (1828-1895), as well as a letter to Spotswood from Reverend Ephraim D. Sanders (d. 1872), head of the Institute, concerning the literary society and the school. 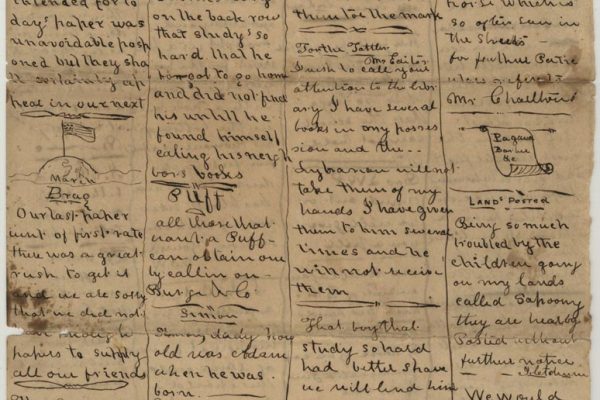 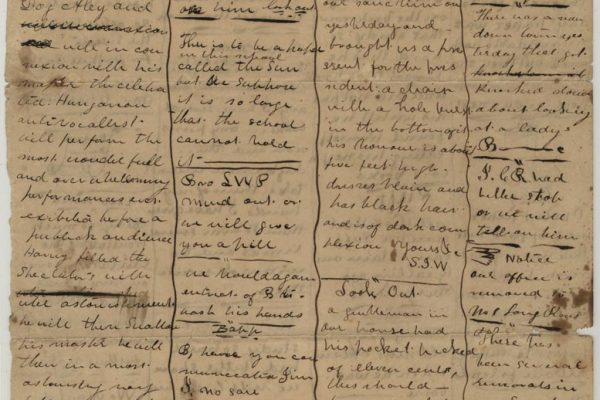 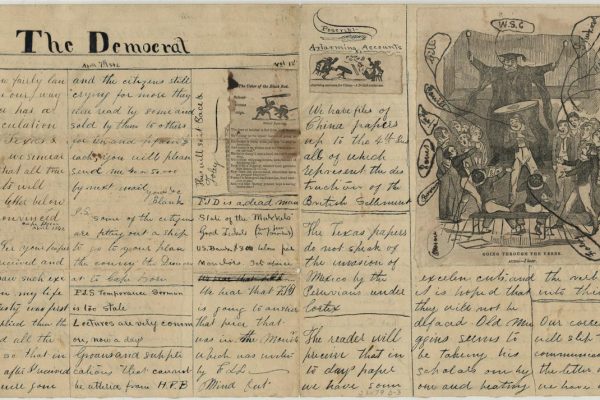 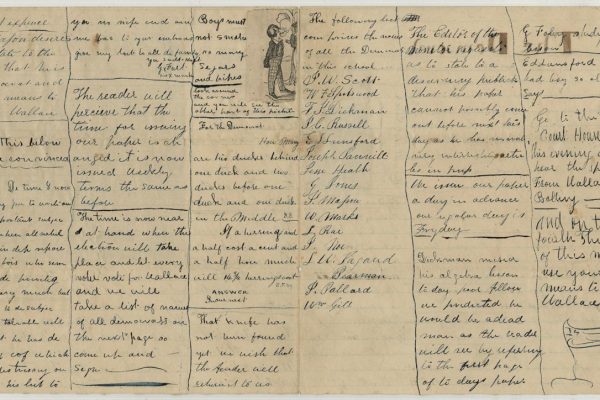 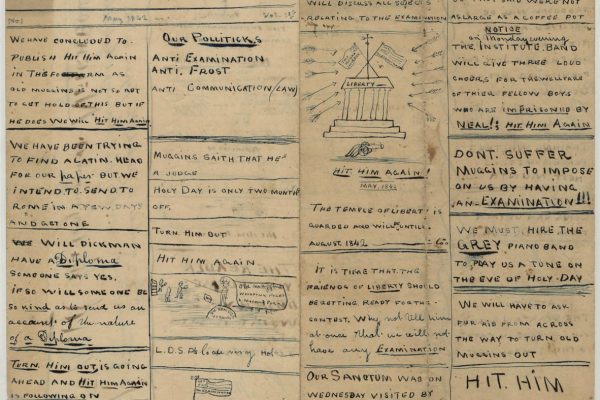 Hit Him Again side 1 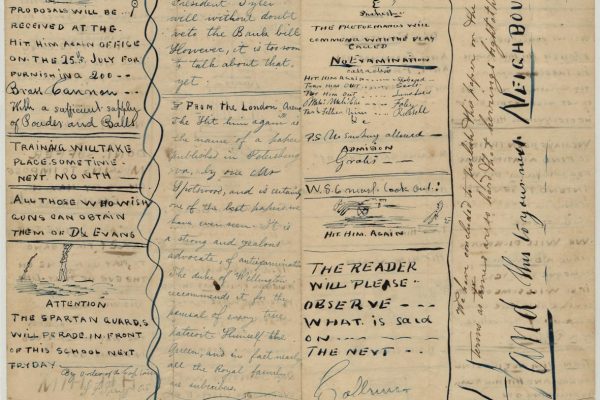 Hit Him Again side 2 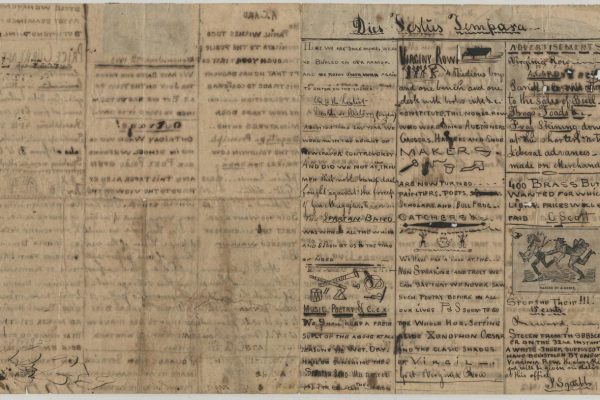 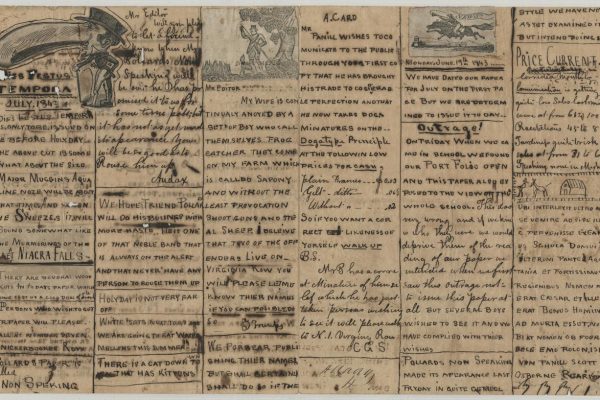 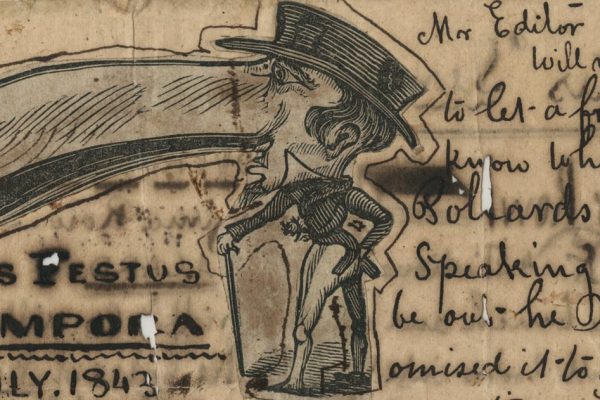 Of particular interest are seven hand-drawn student newspapers (with four different titles), containing editorials, ads, letters to the editor, poetry, notices, and cartoons.  All are concerned with school issues.  “Hit Him Again” (May-June 1842) is the most outspoken, opposing examinations and a hated school official referred to as “Old Muggins.”  The only extant issue of “The Tattler,” March 1842, conveys more social news and is less outspoken on what seem to have been the weightier questions of the day at the Petersburg Classical Institute.  The three April 1842 issues of “The Democrat” were more political in nature, taking stances on state and national politics (pro-Democrat, anti-Whig) and relaying news about fighting in the Republic of Texas “between Texians and Mexicans[.]”  “Dies Festus Tempora” appeared in July 1843, a year later than the previous newspapers, but carried many of the same themes, assailing “Muggins” and relating relevant school news and gossip.  William Spotswood is noted as editor in the May 1842 “Hit Him Again” and was joined on the editorial board by J. Pannill in the June issue.  Both Spotswood and Pannill are included in a list of sixteen Democrats in the 7 April issue of the same-named paper.

Spotswood, Pannill, and their fellow editors must have put much time and effort into their newspapers.  One wonders if the editors focused as much on their studies!

This unique collection helps illustrate how varied the types of organization records collections at the Library of Virginia can be.  You can explore further by accessing the Organization Records Guide at the following link: http://www.lva.virginia.gov/public/guides/organization_records.htm.