Joseph Robinson, alias “Cocky Joe”, was convicted on 9 April 1951 in the Portsmouth City Hustings Court for the 1943 murder of Marc A. Terrell and sentenced to die in the electric chair at the Virginia State Penitentiary on 11 May 1951. Court appeals delayed Robinson’s execution several times until the court set a new date – 4 May 1954. However, Robinson had no intention of letting the state kill him. At 5:30 a.m, ninety minutes before his scheduled execution, Robinson hung himself with a bed sheet in his cell. He was the first death row inmate to commit suicide in Virginia. 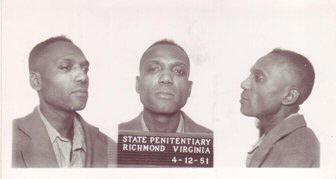 The circumstances surrounding Robinson’s suicide are documented in an investigative report dated 5 May 1954 written by W. F. Smyth, Jr., Penitentiary Superintendent, to R. M. Youell, Director, Division of Corrections, Department of Welfare. The report can be found in the Virginia Penitentiary Execution Files (Accession 38103), which also contain court records, Robinson’s mug shot, criminal record, death certificate, and suicide notes, as well as the razor blade he used to cut his wrist in his first suicide attempt.

Joseph Robinson’s saga began nine years earlier. In the spring of 1943, Robinson and his girlfriend Margaret Fowler Barnes went on a crime spree in Portsmouth, committing several robberies and assaults culminating in the armed robbery of the Capital Theater. On 11 May 1943 at 10:00 p.m., theater manager Marc A. Terrell was shot and robbed of more than $700. The robbery occurred in the crowded main auditorium of the Capital Theater where over 1,000 people were viewing the movie Casablanca. Terrell was walking down the aisle with the box office receipts when Robinson and Barnes approached Terrell. Robinson shot Terrell in the stomach, grabbed the box of money, fired several shots in the air to terrorize the audience, and escaped. Terrell died five days later and the pair of bandits fled to New York State. The couple continued their crime spree in New York, where they were convicted of several robberies; Robinson was sentenced to a 15-45 year sentence and Fowler to a 10-30 year sentence. 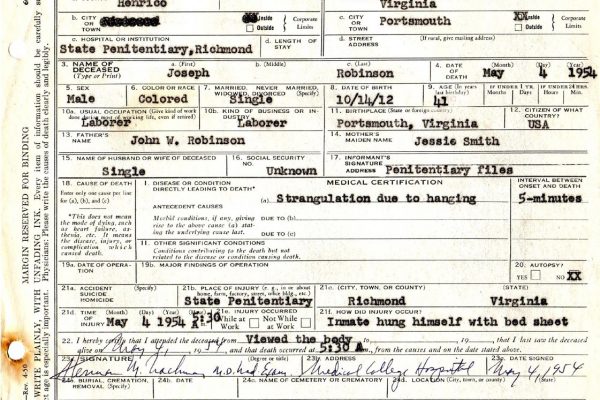 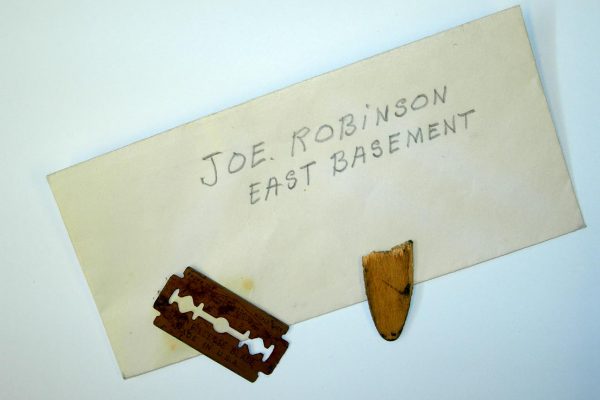 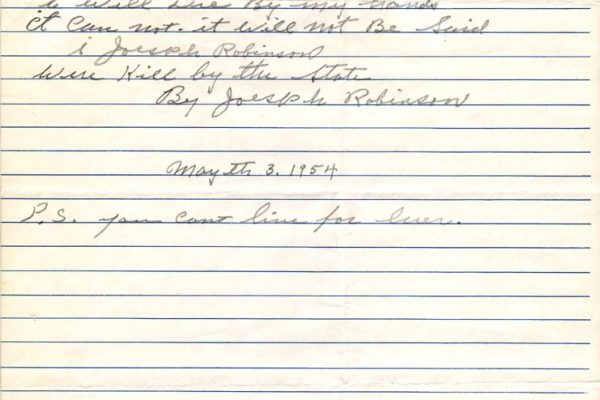 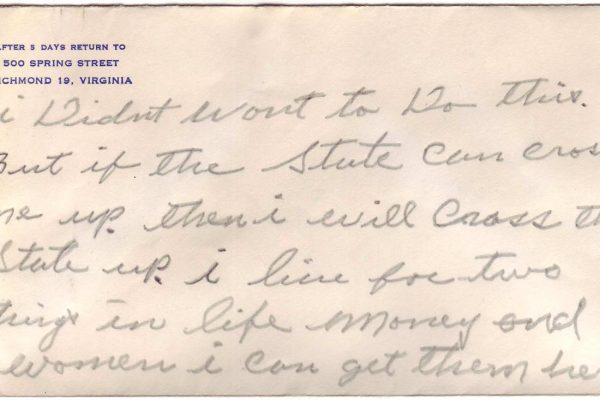 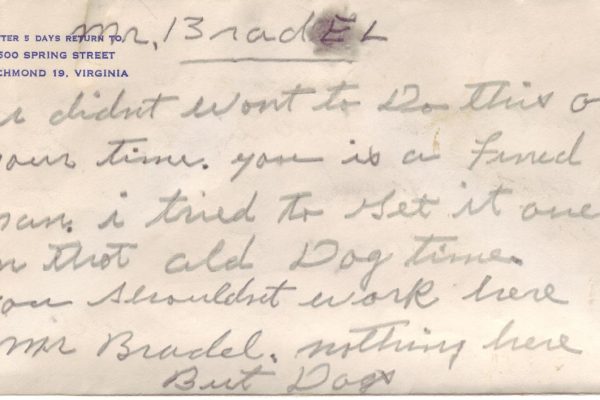 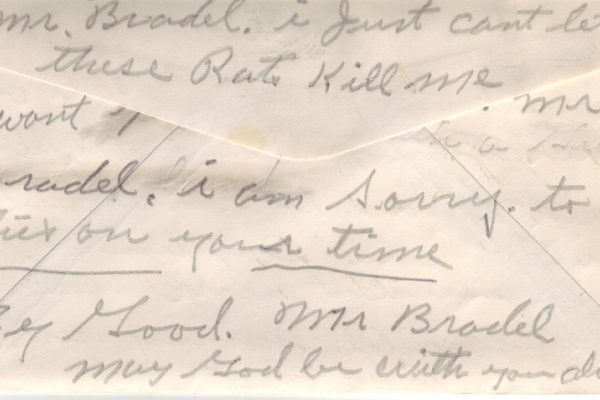 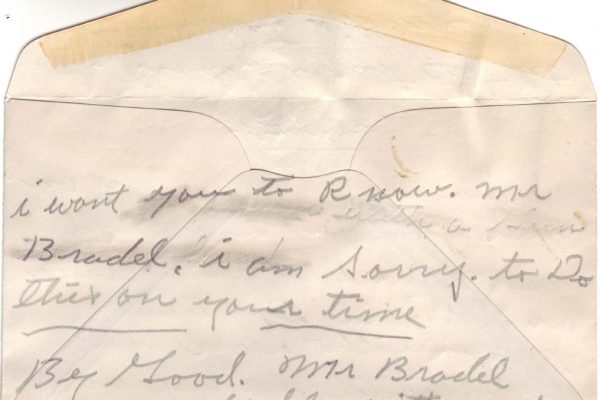 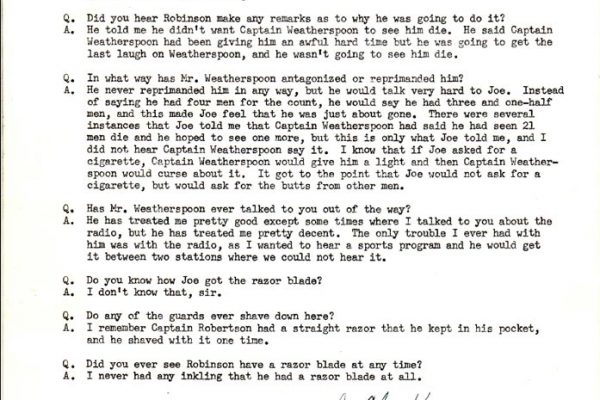 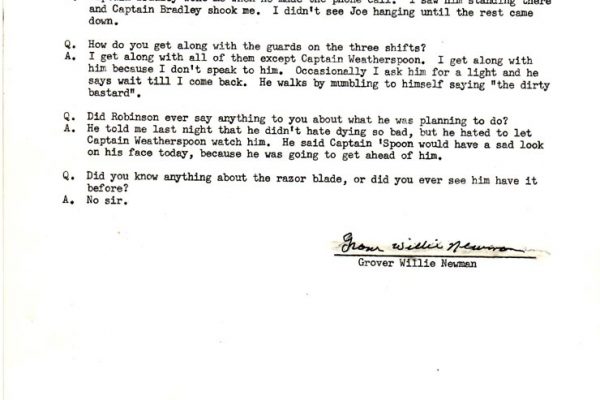 Following an investigation by the Portsmouth police, Robinson and Fowler were extradited from New York to Virginia to stand trial for murder, armed robbery, and felonious assault. Barnes was convicted on all counts on 28 February 1951 and sentenced to three life terms in the Virginia Penitentiary. Robinson was also convicted and on 9 April 1951, Portsmouth Court of Hustings Judge F. E. Kellam sentenced Robinson to death for first degree murder, 30 years to life for robbery, and ten years for malicious assault. Kellam added that Robinson had “a heart of steel” and set the execution for 11 May 1951. However, Robinson’s appeals delayed the execution for several years until the court finally set a new date and time of 4 May 1954 at 7 a.m.

On the morning of his scheduled execution, Robinson did not sleep. In his cell on death row in the East Basement of the Virginia Penitentiary, he paced but said very little to the guards. At 5:12 a.m., Robinson asked L. K. Gangwer, Officer-in-Charge, “how much time do I have?” When told he had approximately two hours, Robinson told John Bradley, the guard on duty, that he was going to sleep.

Bradley looked into Robinson’s cell at 5:30 a.m. and saw him hanging from a sheet tied to a plumbing pipe. He immediately called for assistance and Gangwer and H. T. Harrison, Jr., Medical Externe, arrived within minutes. To thwart any rescue effort, Robinson had stuck a piece of a broken wooden spoon in the lock. When prison staff finally got the door open and cut down Robinson, he was dead. Robinson had also cut his left wrist with a Gillette double edge razor blade that he had smuggled into the death house in his shoes. Dr. Herman Nachman, a State medical examiner, said that the razor was not the cause of death. Nachman ruled death was due to strangulation.

In the second note Robinson wrote “i Didn’t want to Do this But if the State can cross me up, then i will Cross the State up. i live for two things in life money and women i can get them here.” [sic] In the third note, Robinson apologized to John Bradley, the guard on duty, for committing suicide on his watch:

Penitentiary Superintendent W. F. Smyth’s investigation provided a possible reason for Robinson’s suicide. Penitentiary officials interviewed another death row inmate, John Clay Kensinger, about his conversations with Robinson. Kensinger said Robinson planned to kill himself because he did not want Captain Weatherspoon, the guard on duty from 4:00 p.m. to 11:30 p.m., to see him die. He added that “Captain Weatherspoon had given him a hard time but he was going to get the last laugh on Weatherspoon, and he wasn’t going to see him die.” Kensinger also said that “Joe told me that Captain Weatherspoon had said he had seen 21 men die and he hoped to see one more.” Grover Willie Newman, a second death row inmate, confirmed Kensinger’s accounts. He also recounted that Robinson said, “Captain ‘Spoon would have a sad look on his face today, because he was going to get ahead of him.”