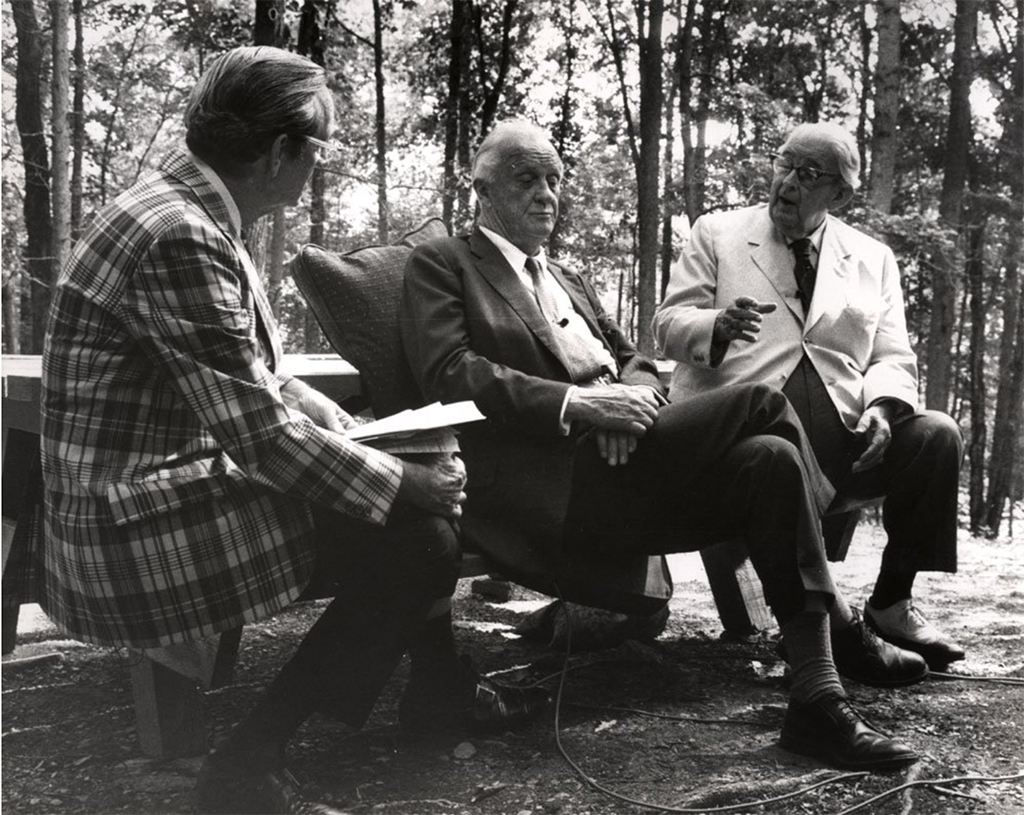 One of the benefits of studying more recent history is the opportunity to see and hear historical figures on film, providing information about speech, mannerisms, and personality that can be difficult to capture in words.   For students of 20th-century Virginia history, a series of public television programs taped in the mid-1970s to late 1980s gives just this sort of glimpse at key state leaders.

Hosted by Richmond Times-Dispatch (RT-D) political reporter James Latimer (1913–2000), and jointly produced by Central Virginia Educational Television and the RT-D, the Living History Makers series featured lengthy interviews of influential Virginia politicians. While the details of each man’s career have been hashed out in print many times, these extensive on-camera interviews breathe life into the story of Virginia’s leadership during times of exceptional stress, including World War II and the battle over school desegregation. 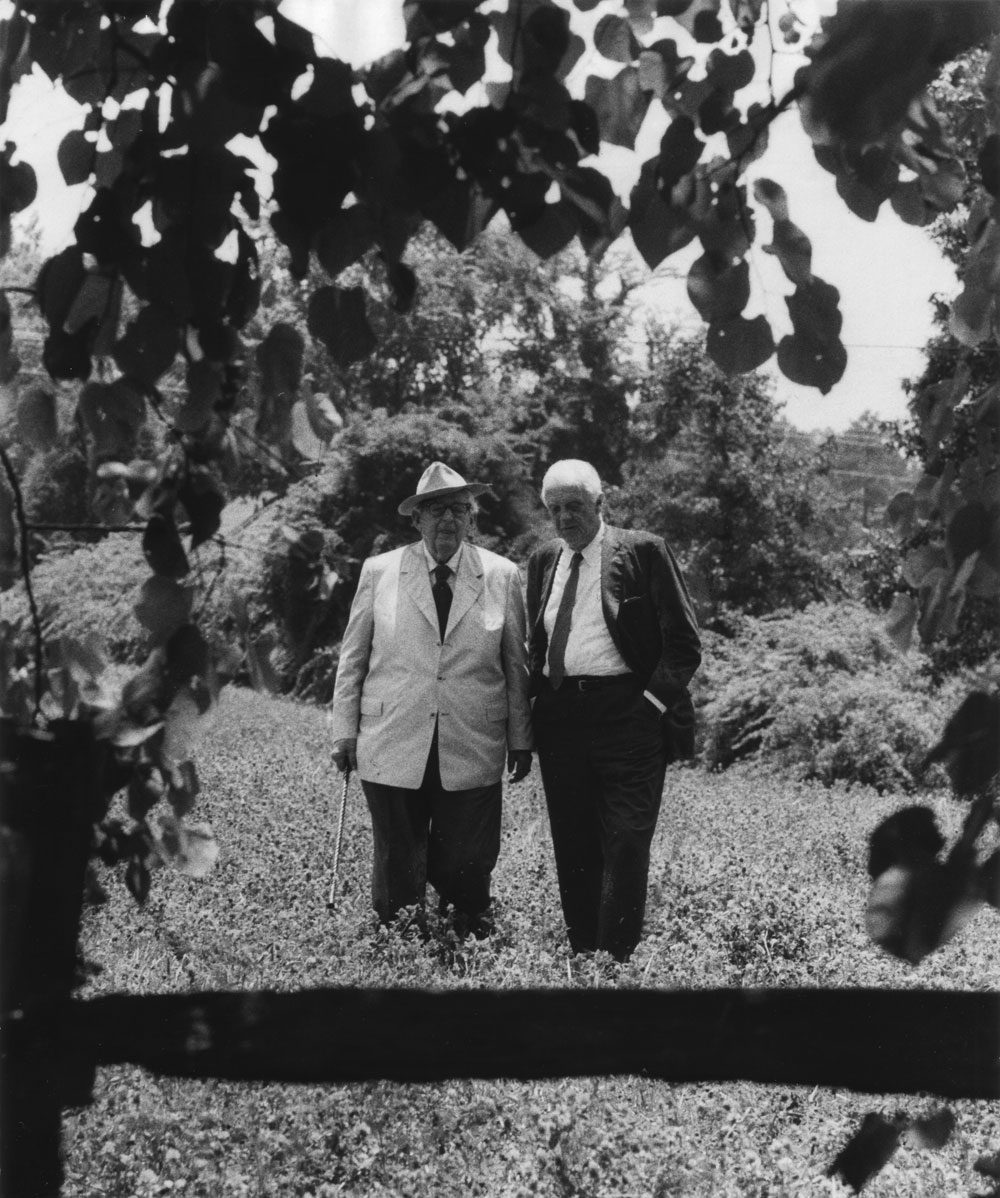 In 1975, Colgate W. Darden (1897–1981, governor 1942–1946) and William M. Tuck (1896–1983, governor 1946–1950) sat down with Latimer for the first Living History Makers program. As public personas, the two men were strikingly different. While the dignified Darden was once hailed by a political opponent as “the noblest Roman of them all,” Tuck was a brash good-timer described by the Richmond News Leader as having “the comfortable appearance of a man who has just dined on a dozen pork chops.” Yet the two men shared a close friendship, forged while Tuck served as Darden’s lieutenant governor. Their ease with and appreciation of one another is evident as the two trade stories while lounging on the grounds of Buckshoal Cabin, Tuck’s Halifax County retreat.

Over the course of eight thirty-minute episodes, Latimer questions each man about his childhood and education, entry into politics, term as governor, and post-gubernatorial career. Given that both were major figures in the powerful “Byrd organization,” the story of that group’s rise and fall figures into much of the discussion. Some of the topics covered include the political style and influence of Harry F. Byrd (1887–1966), the organization’s growing alienation from the national Democratic party, and the temporary revival the organization experienced as a result of the Brown v. Board of Education backlash.

In discussing his term as governor, Darden humbly suggests that he had a relatively easy job—never mind the fact that the United States was in the thick of its involvement in World War II at the time. While the possibility of an enemy invasion via Hampton Roads and other war-related concerns haunted him constantly, public support bolstered Darden. As he saw it, the international emergency drew the state’s citizens and lawmakers together, creating a general “unity of thought and purpose” that minimized petty bickering. When Latimer reminds him of the battle he faced in trying to bar children from religious meetings involving snake handling, Darden is less philosophical.  He laughingly names that particular dispute “the worst thing I ever got into in my life.” 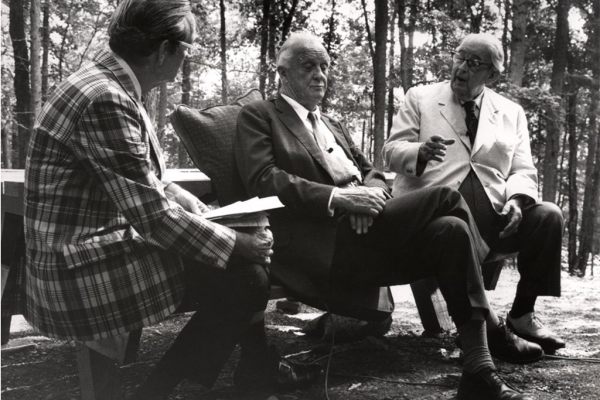 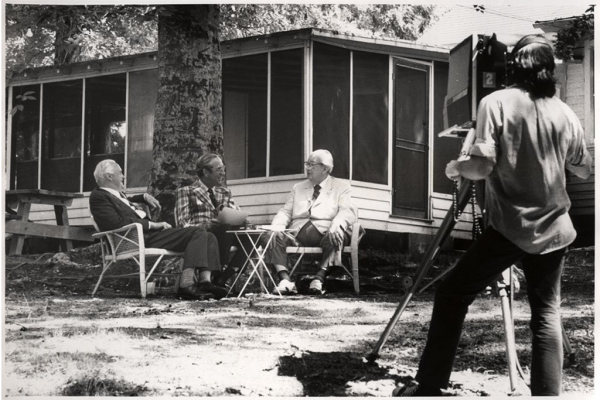 Tuck was not graced with a similarly consensus-driven term, but such a man could never be cowed by a little opposition. One of Tuck’s most controversial moves was his handling of the threatened Virginia Electric and Power Company (VEPCO) strike in his early days in office. Unwilling to accept this possibility, Tuck was poised to utilize a dusty statute authorizing the governor to call up an “unorganized militia.” The would-be strikers would thereby become draftees, forced to keep the power company running. He discusses this, his much-maligned “anti-Truman bill,” and various other flaps with the same disarming humor and conviction that likely flustered and frustrated many an opponent over the years.

In addition to the issues that hung over their own years as governor, Darden and Tuck discuss a range of other topics, from Prohibition to the changing nature of political campaigns to the Voting Rights Act of 1965. The men also talk about Darden’s service as president of the University of Virginia and Tuck’s time in the U.S. House of Representatives. Their comments on various aspects of the Civil Rights Movement are intriguing, but the next of the “living history makers” to be interviewed was personally responsible for one of the most difficult decisions of that era. 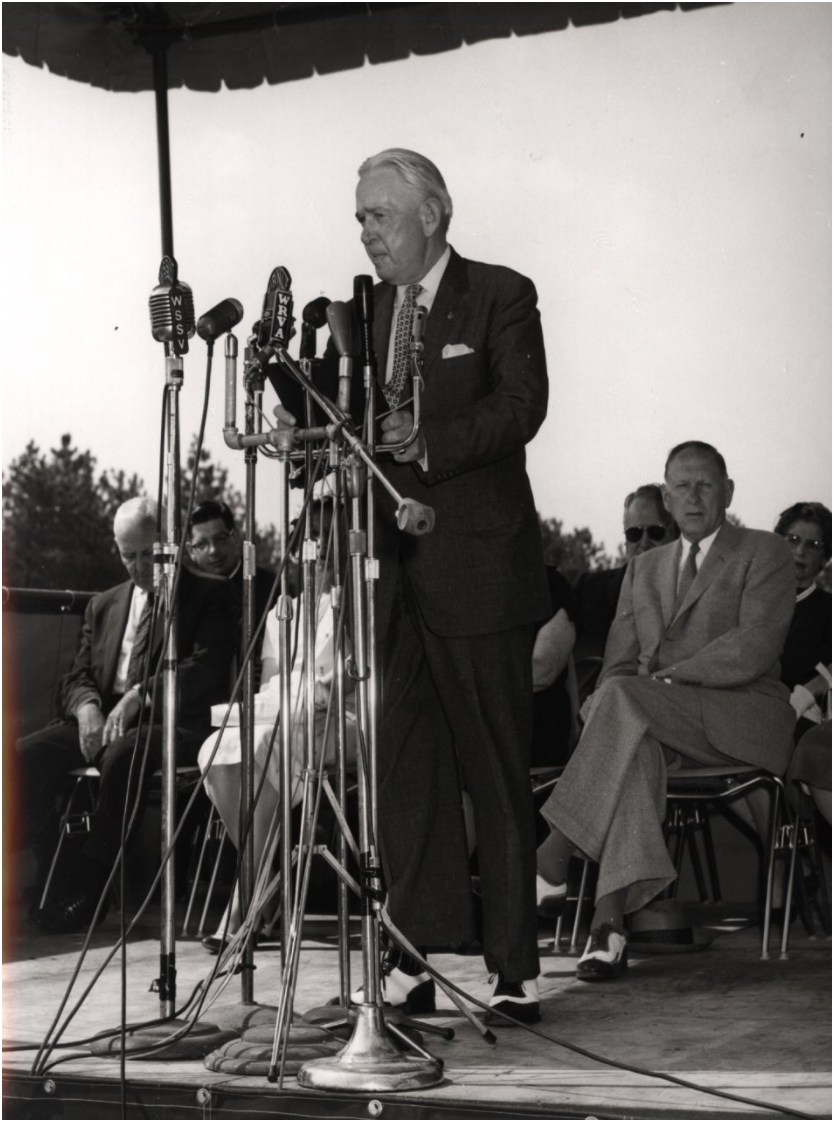 J. Lindsay Almond (1898–1986, governor 1958–1962) experienced firsthand the loneliness that can descend on a leader in times of crisis. Though his own attitude toward school integration was far from supportive, Almond’s understanding of legal realities led him to suspect early on that “massive resistance” could not stand. The Virginia Supreme Court of Appeals and the U.S. District Court confirmed his suspicions in January 1959 when both struck down the school closings.

The Byrd organization leadership believed that Almond should and would go to jail fighting the rulings rather than submit. The governor quickly issued a fiery speech vowing defiance, but reversed himself and admitted defeat in an appearance before the General Assembly the next week. The move was a bold one that would ultimately alienate him from the Byrd leadership. This political isolation had something of a crippling effect on the rest of Almond’s term, particularly in his 1960 push for a sales tax to support education. While the nine-part Almond interview touches on a number of other issues (including the retention of party privileges for Democrats who strayed from the straight ticket), this watershed event was clearly the defining moment of his term.

The Living History Makers programs capture each of these men many years removed from their time in the Executive Mansion, but still mentally agile and eager to share thoughts on the incidents shaping their respective legacies. Viewers can see the easy camaraderie between Darden and Tuck, and sense Almond’s lingering defensiveness regarding his decision to pull Virginia public education back from the brink of dissolution.

Darden, Tuck, and Almond were not the only Virginia political luminaries featured in the Living History Makers series. Governors Albertis Harrison and Mills Godwin were featured in the third installment (Accession 42814).  Latimer later continued the program under the name A Different Dominion, with one series of interviews featuring Governors Linwood Holton and John Dalton (Accession 42996), and another with Independents Henry Howell and Harry Byrd, Jr. (Accession 42997).  The Library has copies of all of these programs.  The Darden-Tuck interviews are filed as Accession 42284, and the Almond series as Accession 42283. 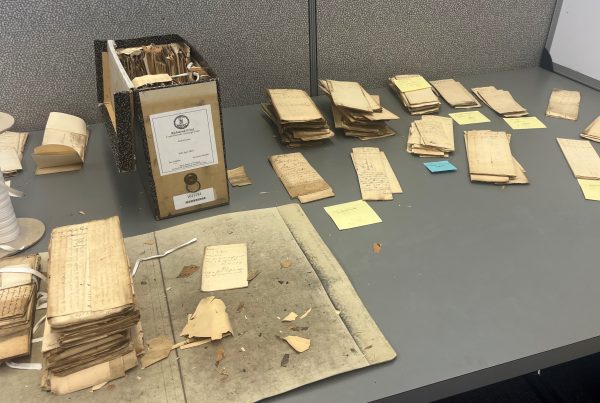