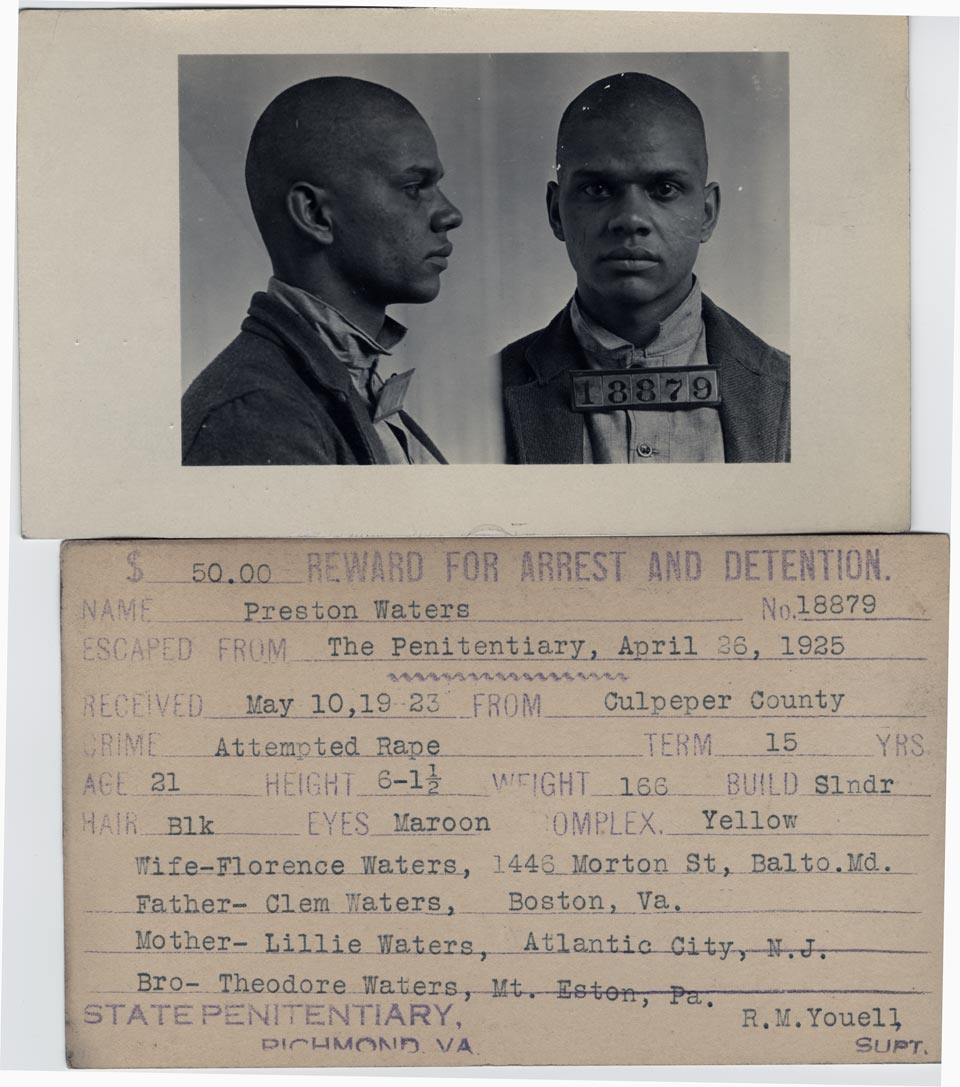 This is the latest entry in a series of posts highlighting inmate photographs in the records of the Virginia Penitentiary.  This week’s entry will spotlight the photographs of escaped inmates.  When an inmate escaped from the Penitentiary, State Farm, or a convict road camp, the superintendent issued to law enforcement 3″x5″ index cards.  The front side contained the prisoner mug shot, while the back of the card provided basic information (name, inmate number, date and location of escape, crime, sentence), physical description, and the name and address of immediate family. 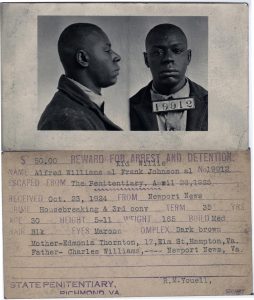 On 26 April 1925, Preston Waters, No. 18879, and Alfred Williams, No. 19912, two convicts at the Virginia Penitentiary in Richmond, sawed their way out of their cell with a hacksaw.  Avoiding the guards, the prisoners made their way to the ground floor, climbed on top of a row of new cells, and cut their way through the metal ceiling in order to gain access to the roof at the southwest corner of the building.  They lowered themselves down by rope to a window and then dropped the fifteen feet to the ground and escaped into the night. 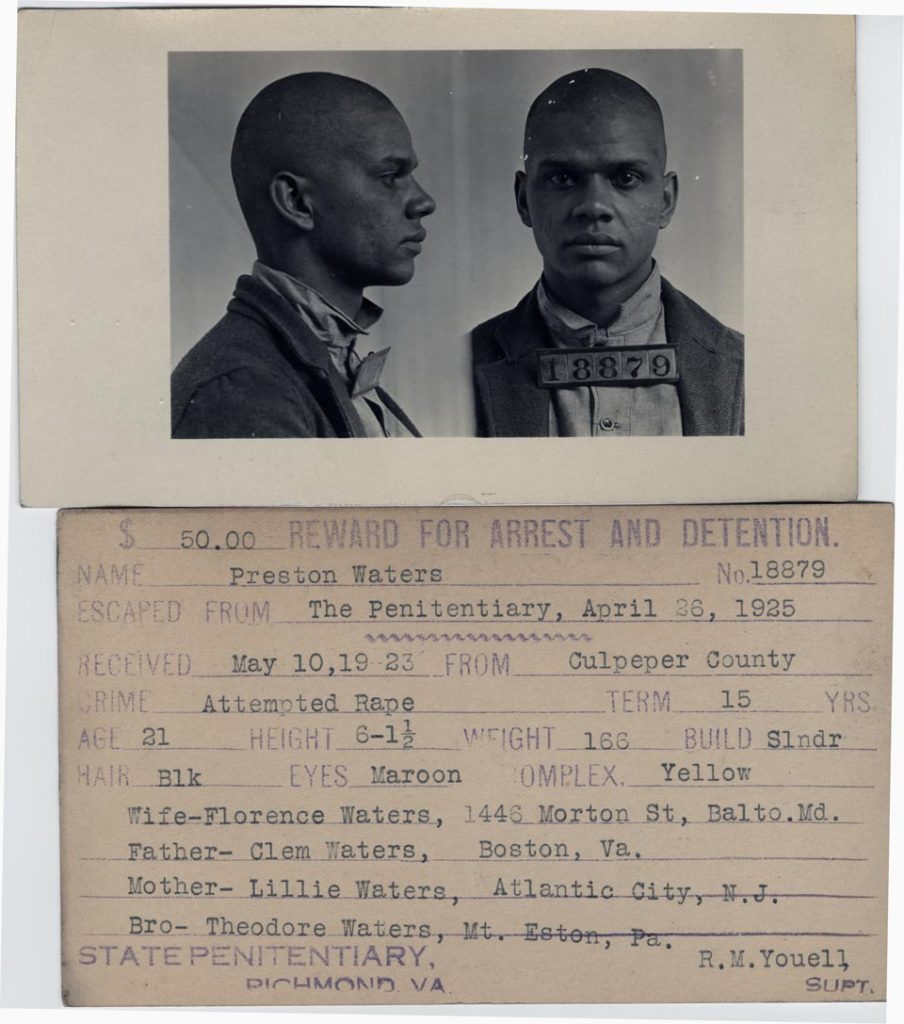 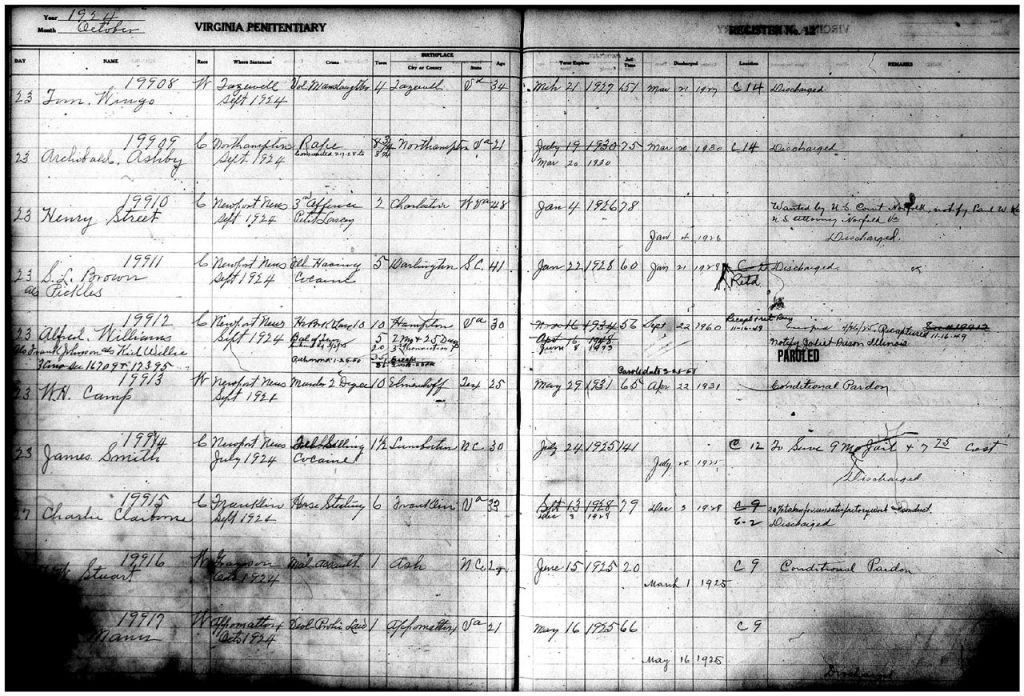 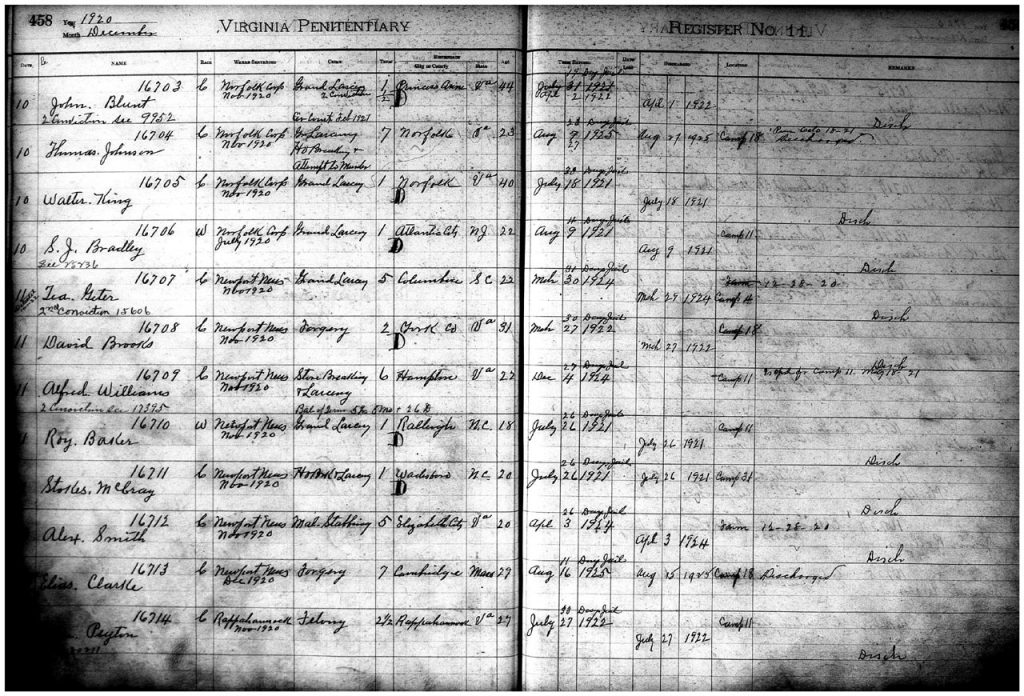 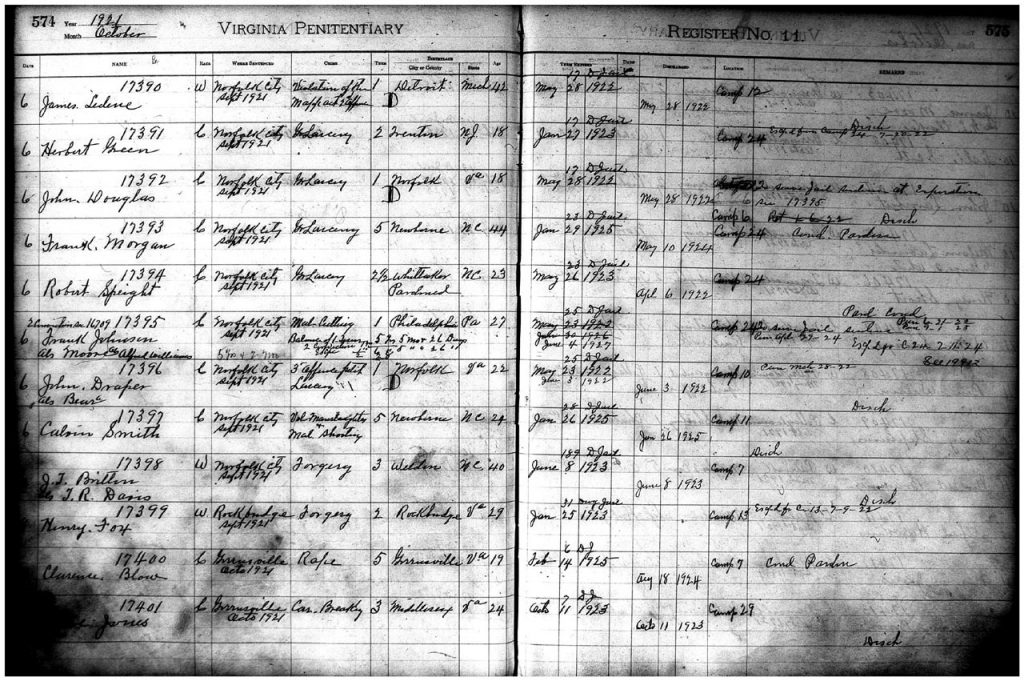 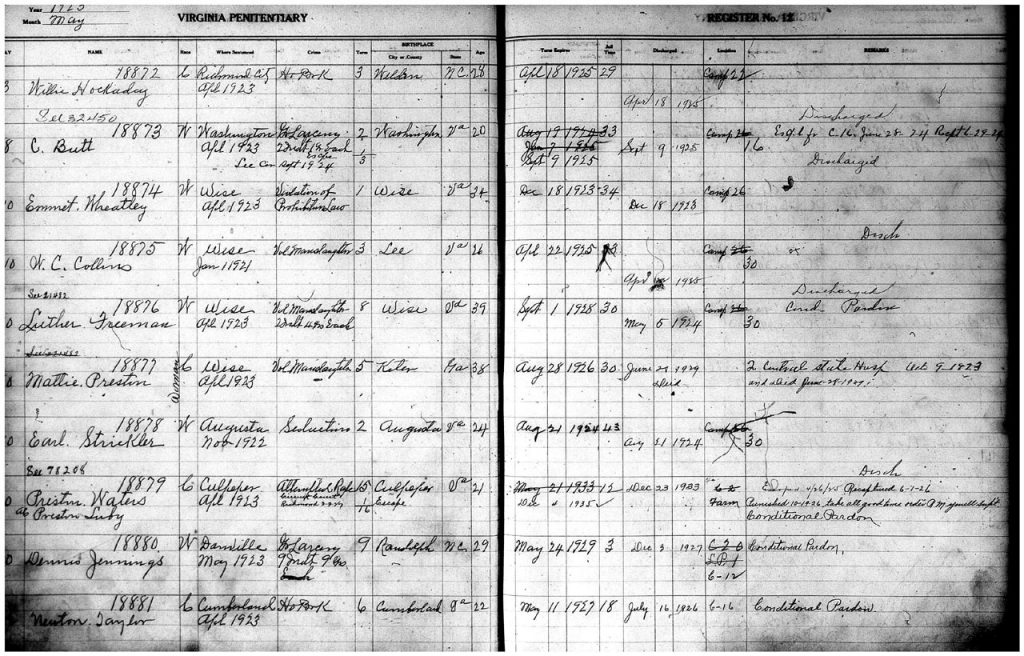 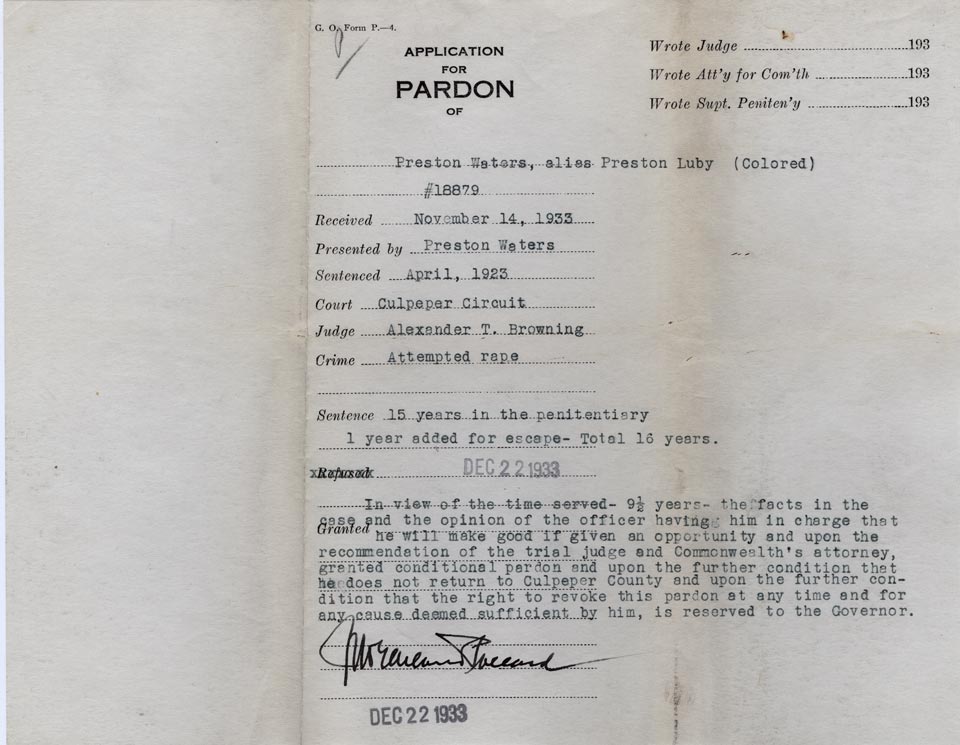 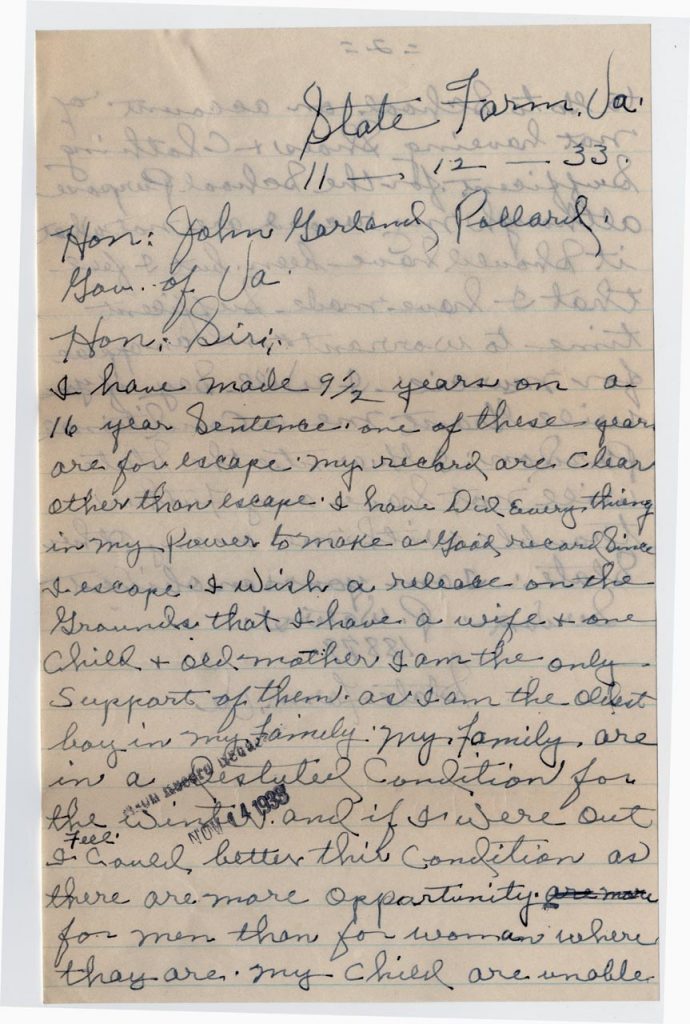 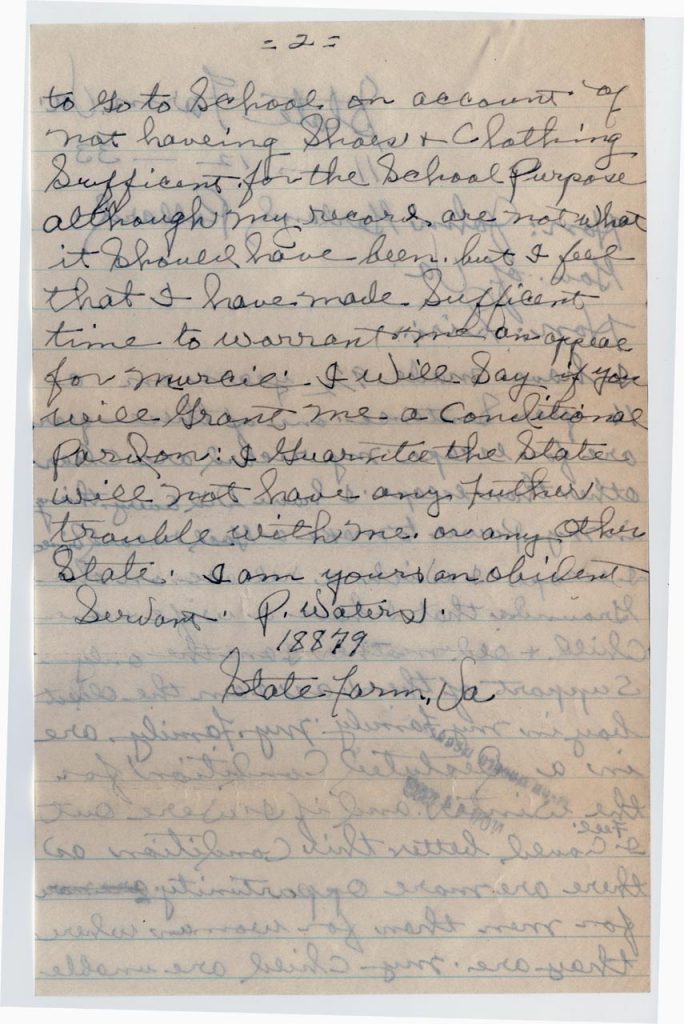 In April 1923, 21-year-old Preston Waters of Culpeper County was sentenced to 15 years in the Virginia Penitentiary for attempted rape.  Alfred Williams had a lengthy criminal record.  In December 1920, Williams was convicted in Newport News of store breaking and larceny and sentenced to six years in the Penitentiary.  Assigned to Camp 11 of the State Convict Road Force, he escaped on 18 May 1921.  He returned to the Penitentiary in October 1921, not as a captured escapee, but as Frank Johnson, a convict from Norfolk sentenced to one year for malicious wounding.  Penitentiary officials quickly realized that Williams and Johnson were the same person and changed his sentence to eight years (one for malicious wounding, five years remaining on his original conviction, and one year for escaping).  Williams was assigned to Camp 24 of the State Convict Road Force when he escaped again on 11 July 1924.  His freedom was short lived, ending in September 1924 when he was convicted of housebreaking in Newport News.  His new sentence, including his new conviction, third conviction and escape, was 35 years.

Preston Waters was recaptured on 1 June 1926.  He received a conditional pardon from Governor John Garland Pollard on 22 December 1933.  Alfred Williams remained a free man for 24 years until his capture on 16 November 1949.  He was paroled on 22 September 1960.