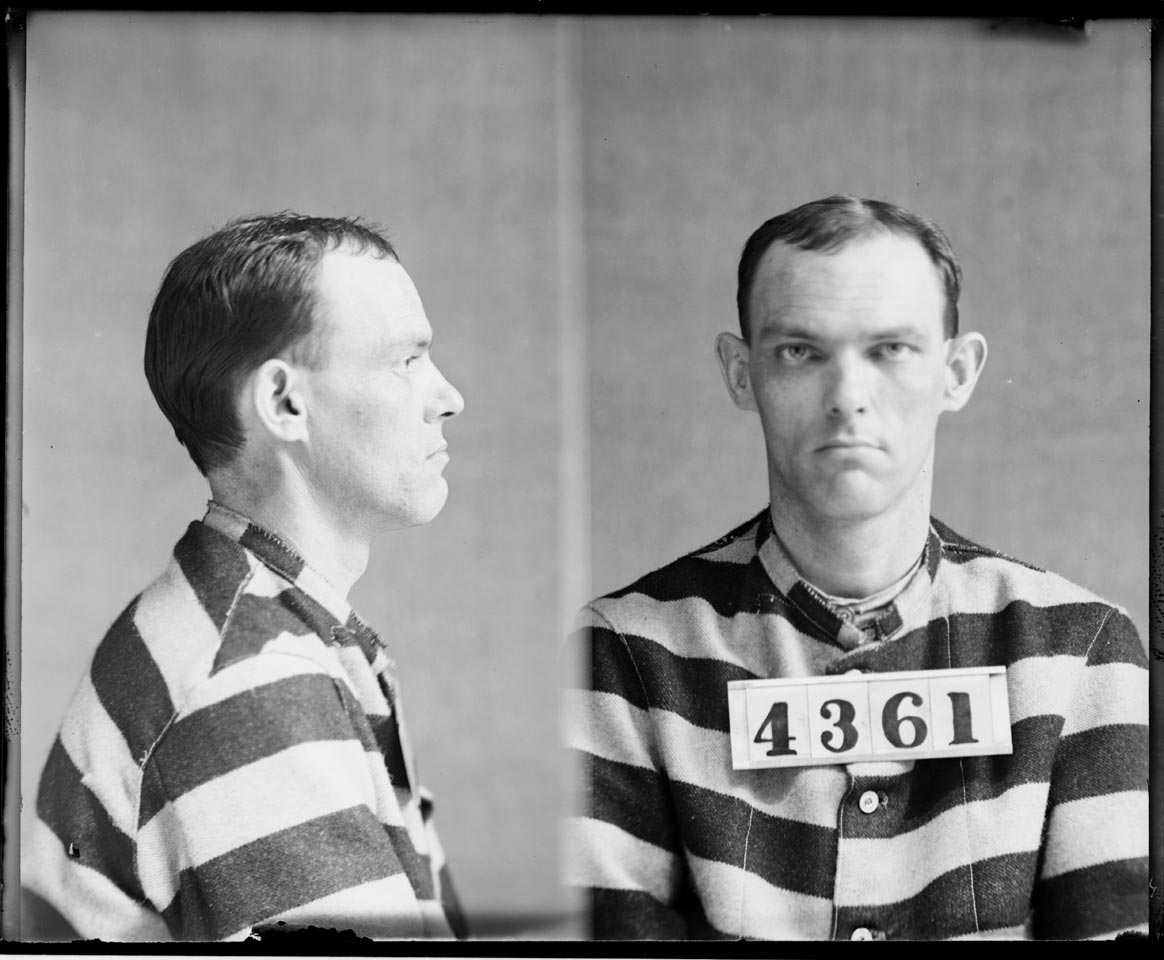 This is the latest entry in a series of posts highlighting inmate photographs in the records of the Virginia Penitentiary.  Walter Turpin, the subject of this week’s post, had a long criminal history of housebreaking and counterfeiting.  His prison record was spotty at best. He escaped once and masterminded a daring escape plan with two other prisoners that failed,  yet, he was pardoned – twice.

Walter Turpin had a difficult childhood.  He was born in December 1877 in Bedford County.  Orphaned at a young age, Turpin made a living as a newsboy on the streets of Lynchburg.  In 1890 he was arrested for stealing cigarettes and sent to a reformatory for seven years.  Turpin quickly graduated from the reformatory to the penitentiary when  he was sentenced in January 1900 by the Richmond City Hustings Court to two years in the Virginia Penitentiary for breaking into the storehouse of the Southern Railway.  Turpin was discharged on 21 October 1901; however, his freedom was short-lived.  Turpin was sent back to the Penitentiary in June 1902 for five years for breaking into a hardware store in Lynchburg.  Since this was Turpin’s second conviction, five additional years were added to his sentence.

On 25 October 1902, Turpin escaped from the Penitentiary in broad daylight.  He exchanged his prison stripes for civilian clothes stolen from a guard, procured a step ladder from the shop building, climbed to the wall, and jumped to the ground and to freedom.  Two days later, he wrote a letter (subsequently published in the Times Dispatch) to J.I Carper, a guard in the shoe shop, promising “to pay you for your pants as soon as I get on my feet.”  He claimed he was innocent and “when I get to New York…I am going to sail straight to England.  I am going to try over there and see how will get along.”  Turpin never left the country.  He was captured in Georgetown, Delaware, in February 1903.

Turpin masterminded an unsuccessful escape attempt on 3 July 1904.  Turpin gathered tools, including a saw, a rope made of old blankets, an imitation pistol, and a convict suit dyed black with shoe polish stolen from the shoe shop.  Turpin and his cellmate, W.G. Donahue, began to cut the bars on the cell windows.  Joseph McGivens (alias Seybold), who occupied the cell next to them, cut a hole in the wall and joined them. The guards were tipped off to the escape attempt and the prisoners never left their cell.  Turpin received one additional year for attempting to escape and two years for cutting out of his cell. 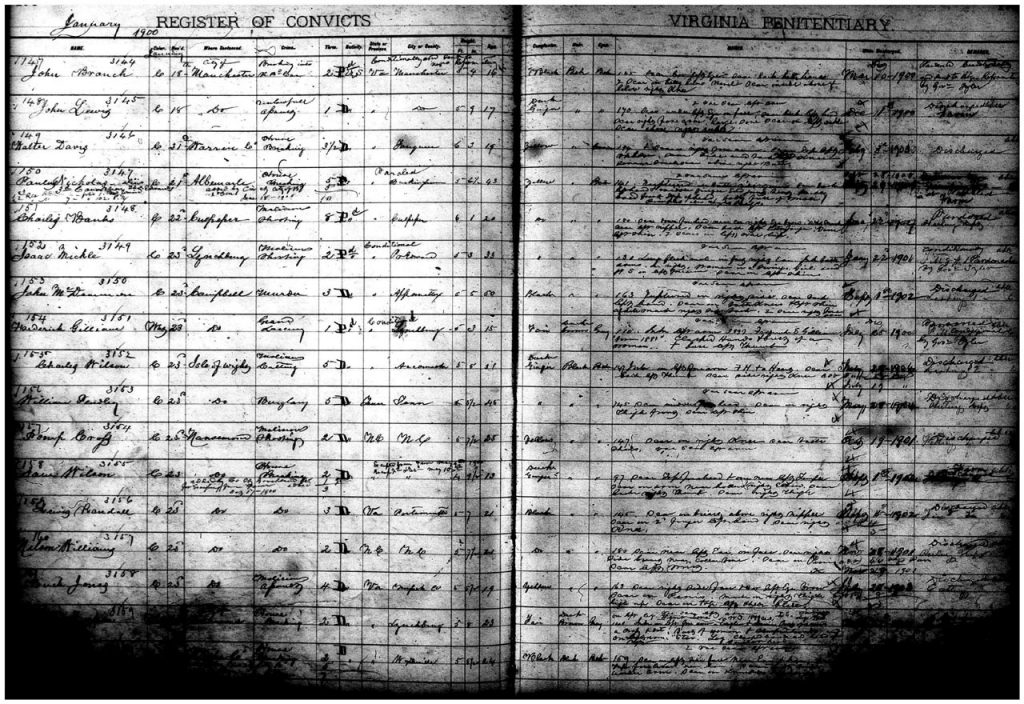 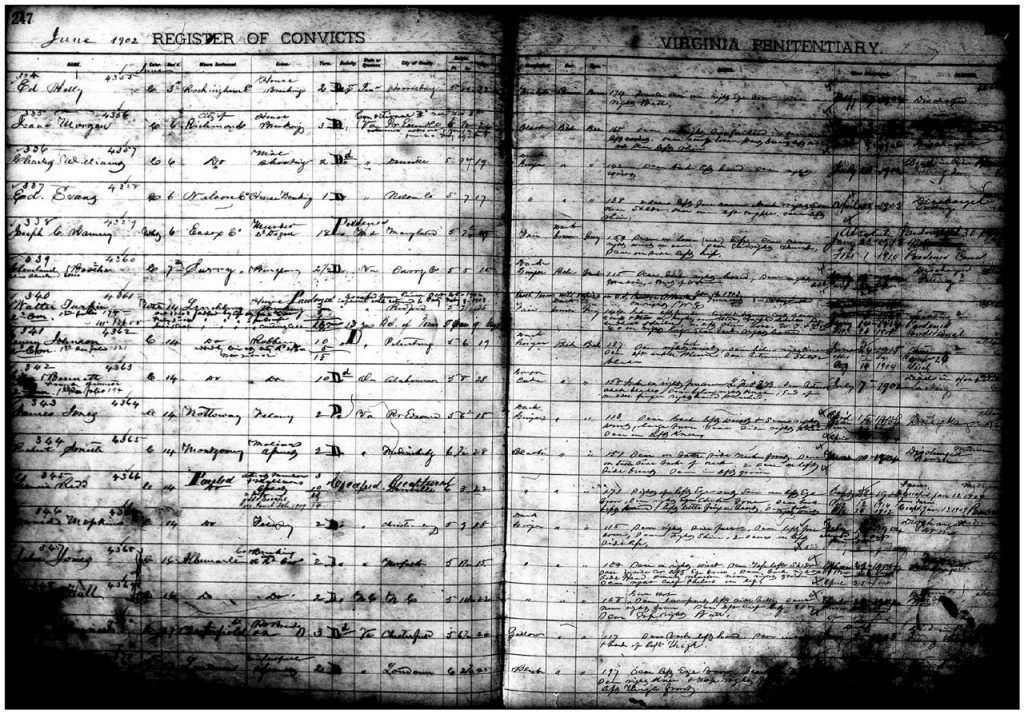 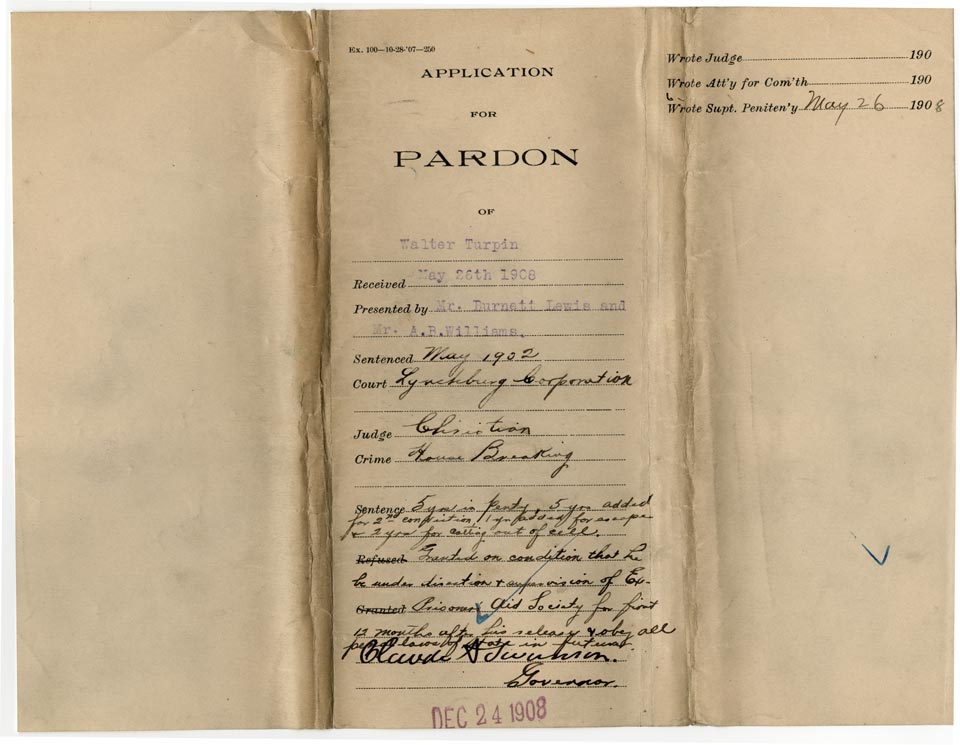 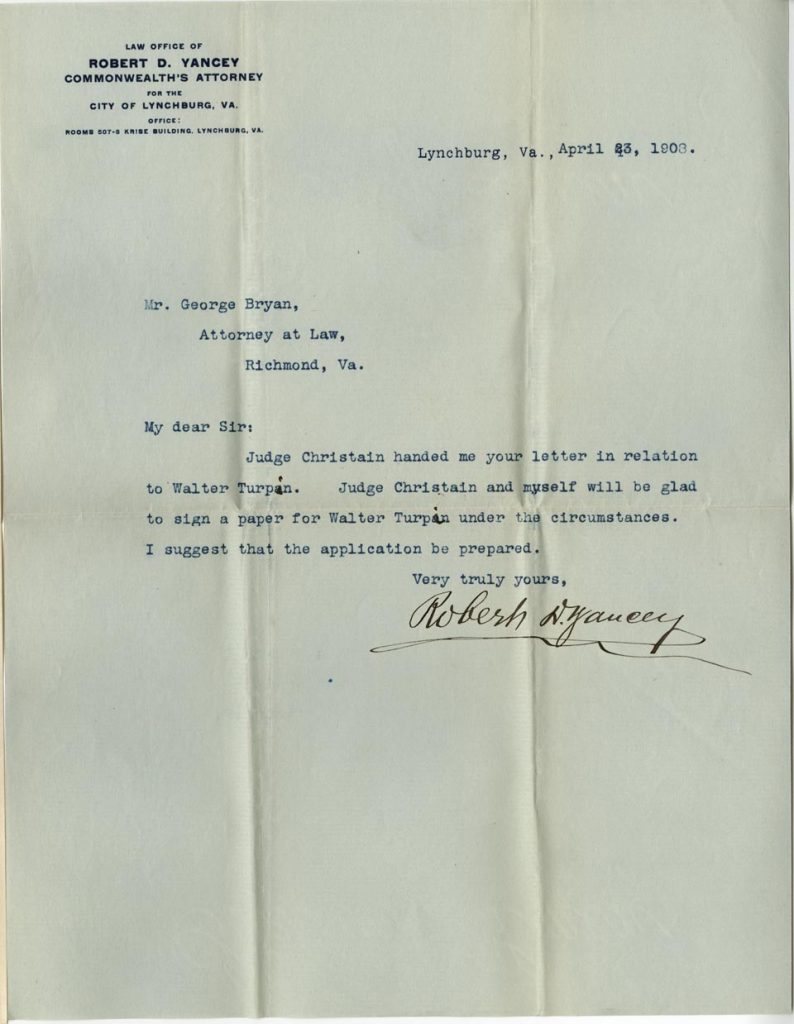 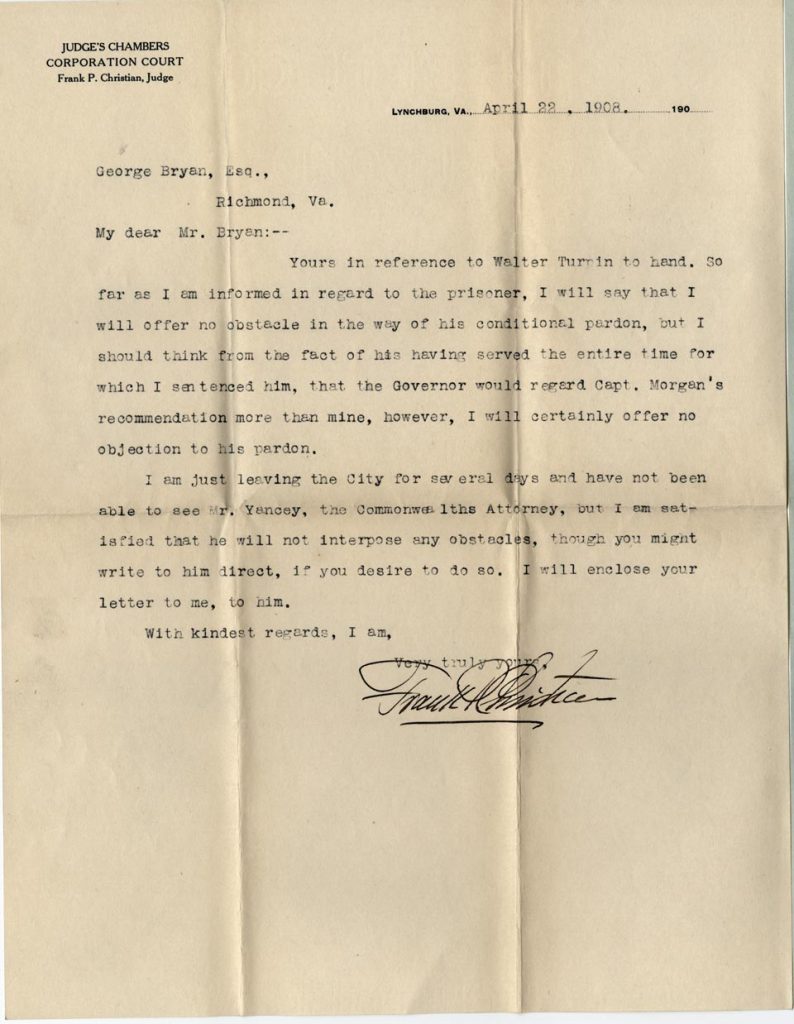 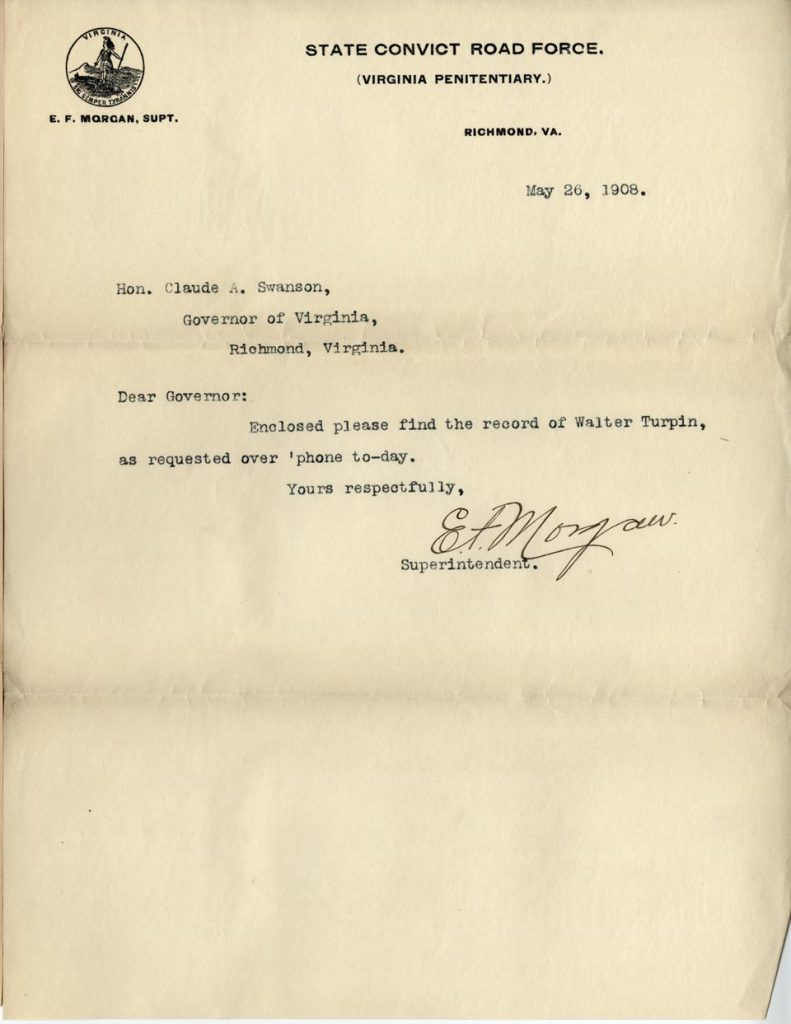 After his failed escape attempt, Turpin turned to another project.  He ran a counterfeiting ring from inside the Penitentiary.  The ring made nickels, dimes and quarters from discarded metal from the shoe shop.  The counterfeit coins were perfect as to size and thickness but felt greasy and lacked in weight.  A convict who had received one of the fake coins reported it to the guards and the ring was discovered in February 1905.

In May 1908, Burnett Lewis, president of the Ex-Prisoners’ Aid Society of Virginia, requested a pardon for Turpin.  Lewis visited Turpin once a week for several years and was “firmly convinced, from his conduct, demeanor and conversation that his reformation is genuine, that his purpose is to be a true man, that his mind is fixed on that profession was deeply sincere and not actuated by any effort to secure clemency.”  Lewis added that Turpin had “reflected seriously upon his past life,” “come to his senses,” and “modestly, quietly and unostentatiously [sic] united himself with the church.”  He concluded that “if I did not believe this I would not write it…and feel that if he is liberated your clemency will make a man who will feel that he owes something to the world and will strive faithfully to pay it with interest.”  Governor Claude Swanson pardoned Turpin on 24 December 1908. 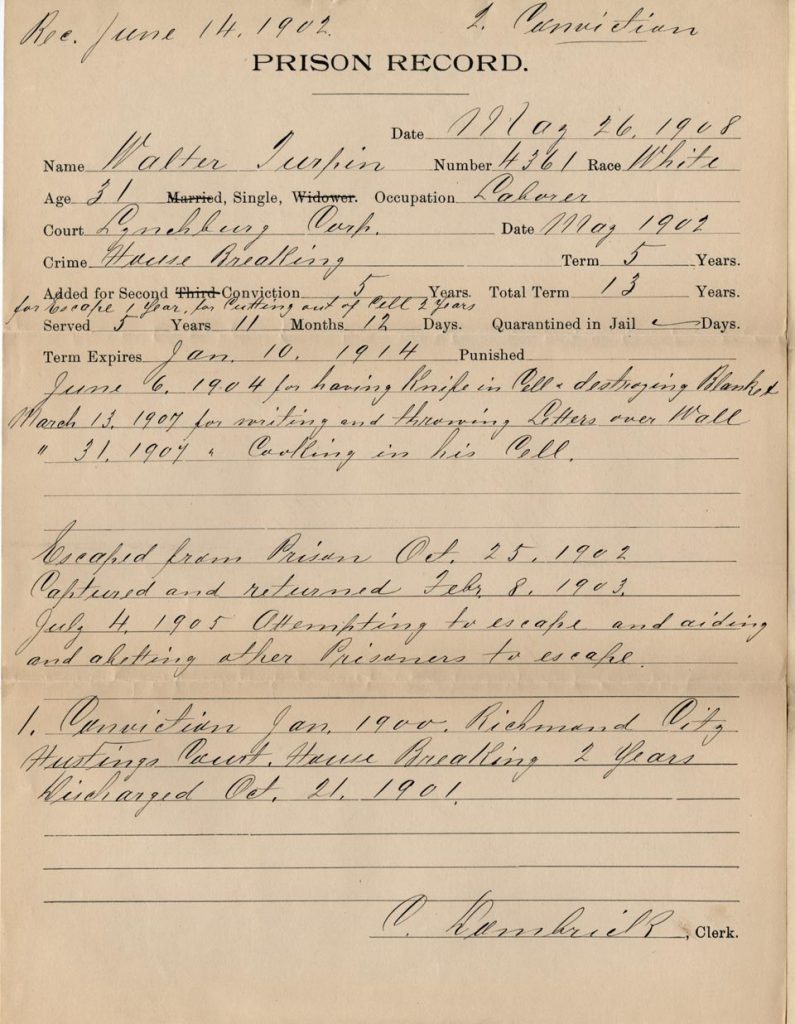 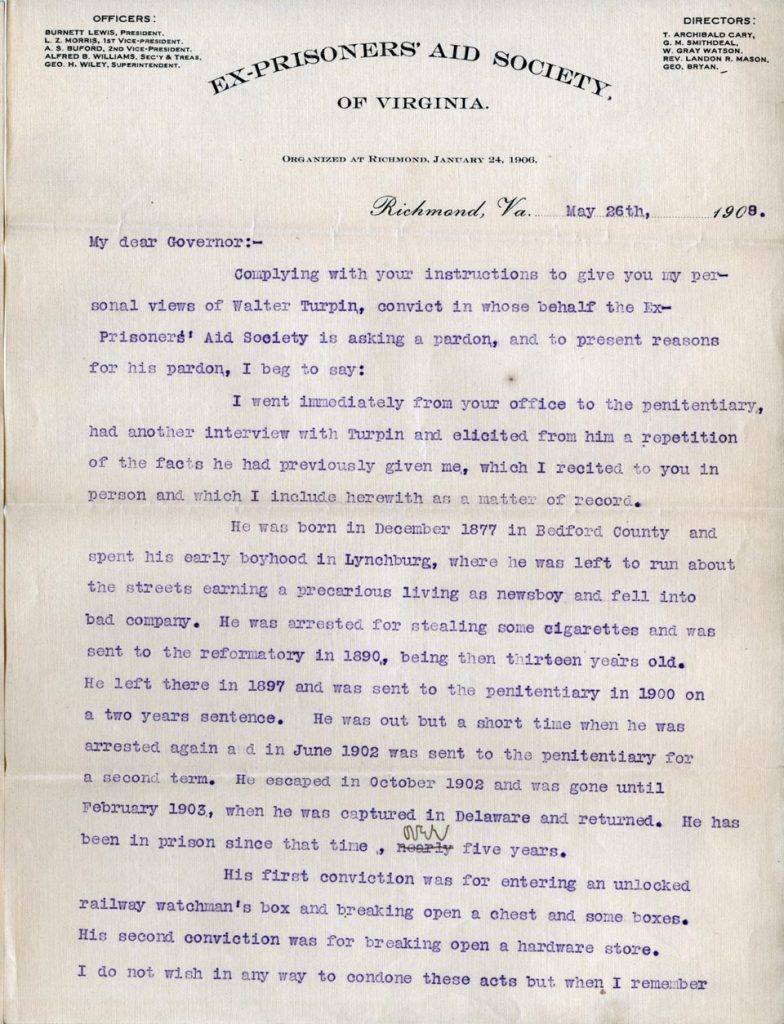 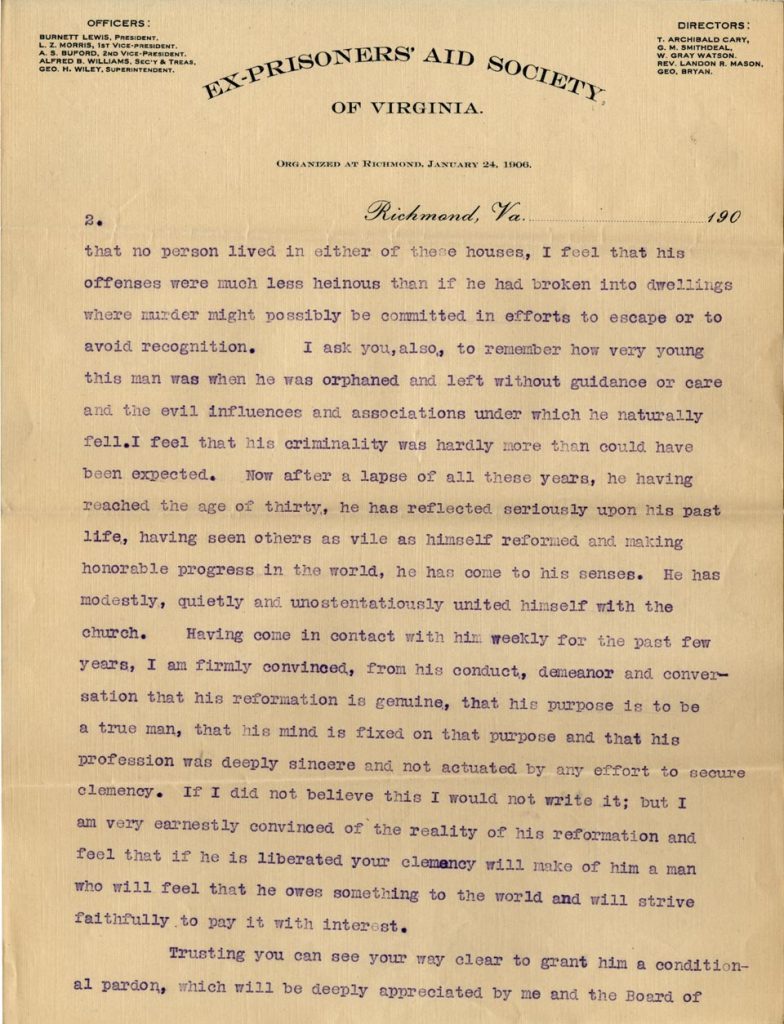 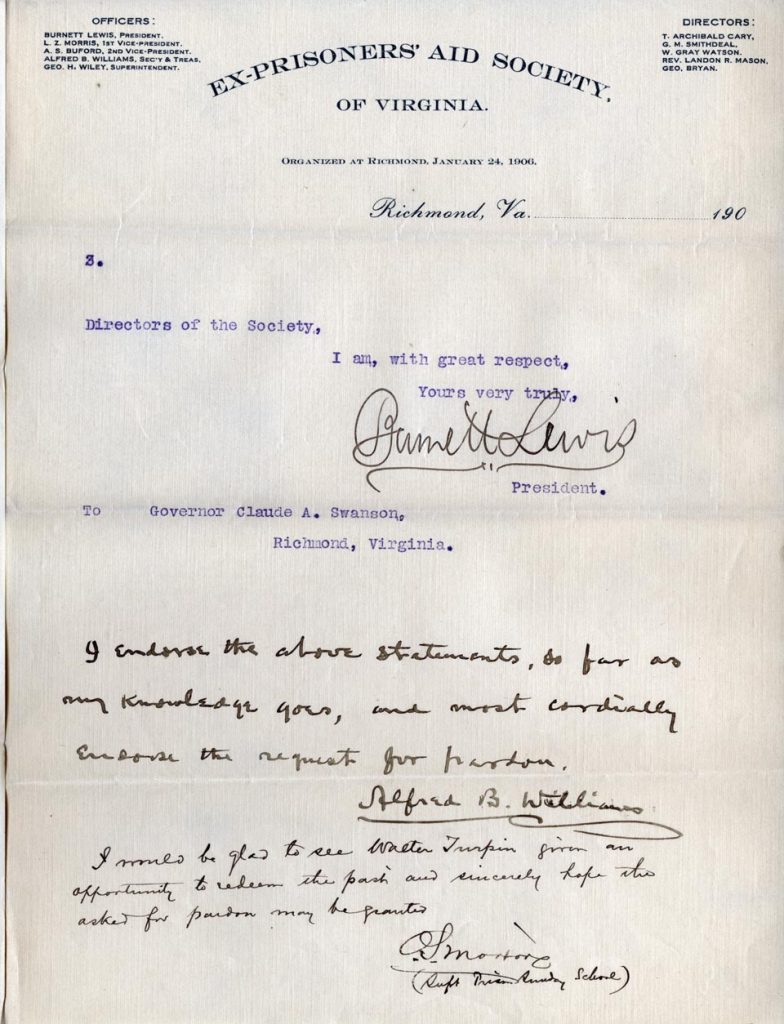 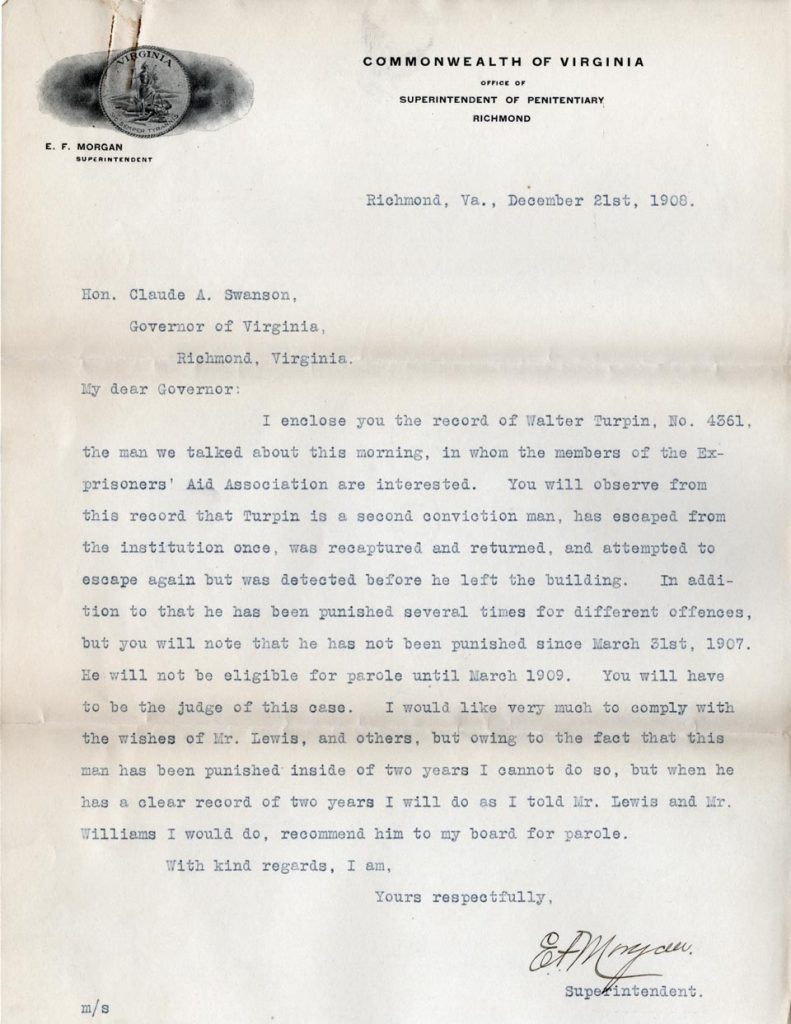 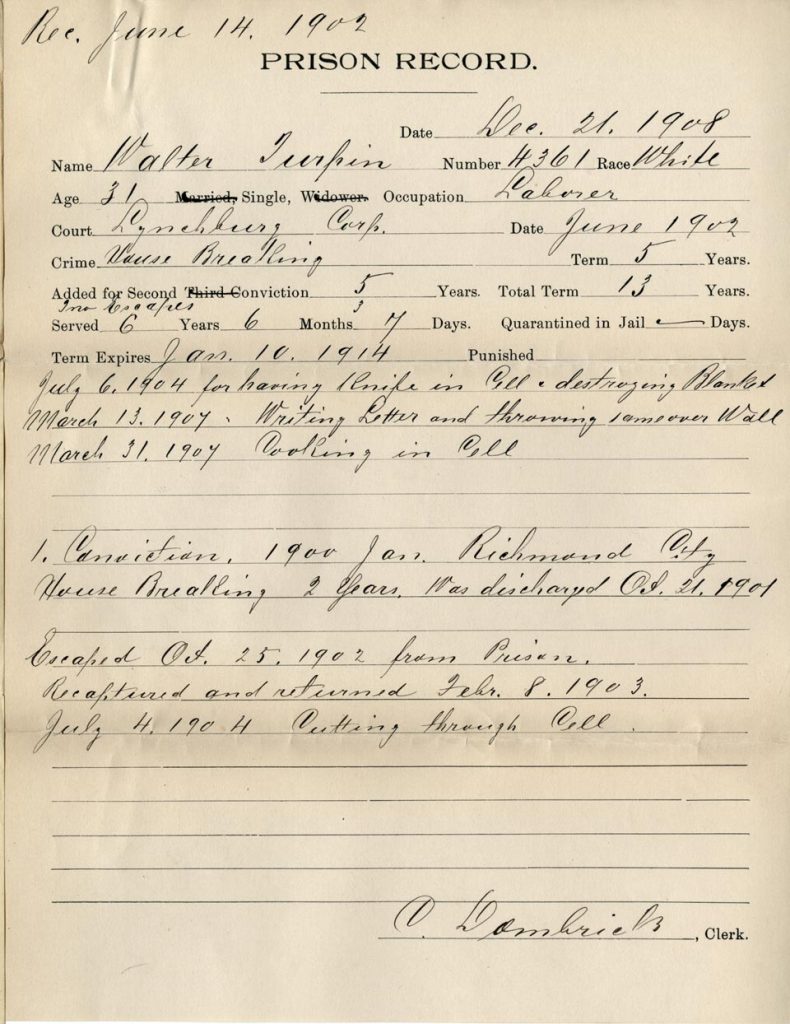 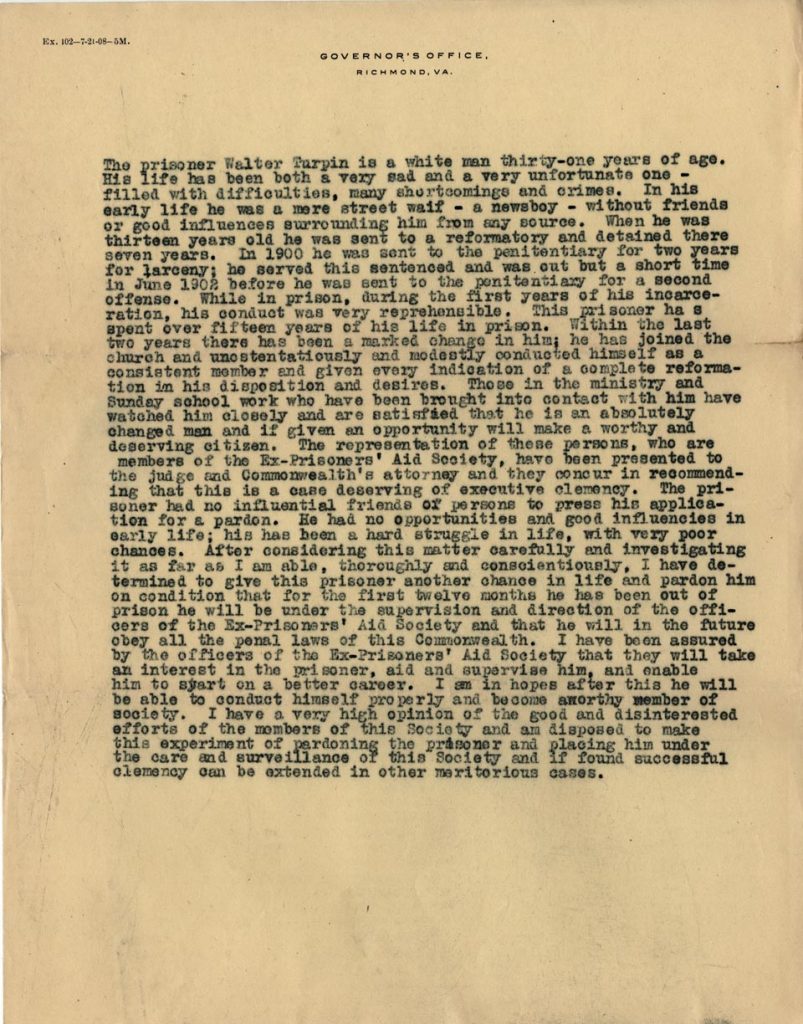 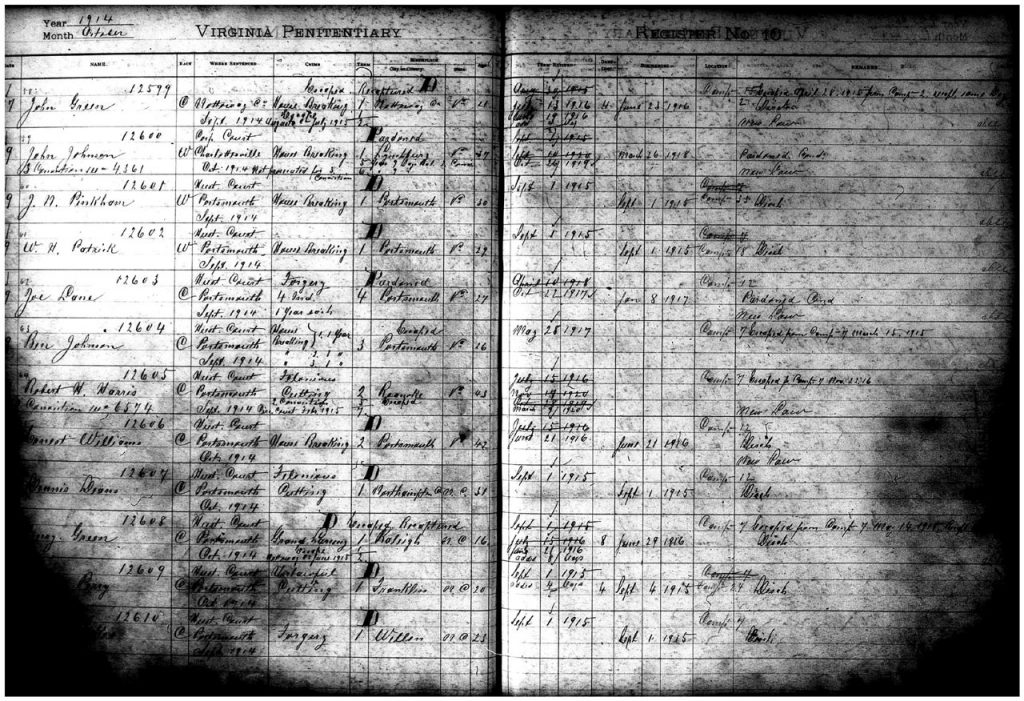 Burnett Lewis could not have been more wrong in his assessment of Turpin.  He was arrested again in January 1909 for counterfeiting coins.  Turpin was convicted in United States District Court in Richmond and sentenced to five years at the Federal Penitentiary in Atlanta.  Released in February 1913, Turpin returned to Virginia and his old ways.  In October 1914, Turpin, using the alias John Johnson, was convicted in Charlottesville of housebreaking.  At some point after his incarceration, Penitentiary officials learned that Turpin and Johnson were the same person.  Johnson’s entry in the prison register includes a cross reference to entry 4361.  Governor Westmoreland Davis pardoned “Johnson” on 27 March 1918.

In two weeks:  Will Liddle