Many of the staff and researchers at the Library of Virginia remember our colleague and friend Robert Young Clay for his vast knowledge of the records in our collections.  Bob, who died last year, left his papers to the Library, and I recently completed processing them.  I knew Bob for about eight years before his retirement in 2001.  I recall how he assisted me with answers to some of my most puzzling questions, and seeing him helping patrons with their genealogical research.

I also remember his biting humor, lack of patience at times, the slamming of the phone receiver, and banging of a book against the reference desk.

But for those who never saw it, there was another side to Bob, and that comes across in some of the items contained in his papers. While much of the collection is made up of his research on the Clay family and its allied lines, there are also materials which demonstrate the personal side of Bob, a “kinder and gentler” side that not all staff or patrons may have seen.

Back in 1984, a certain reference archivist did not endear himself to officials in Fairfax County.  Business owners in Mercer County, West Virginia, were growing increasingly frustrated with state officials in Charleston.  There was even talk of the county rejoining the Commonwealth of Virginia.  “The way I heard it, we’d take Mercer County back if we could give away Fairfax,” Bob remarked from Richmond.

The chairman of the Fairfax County Board of Supervisors responded tersely in a letter to Bob on 2 August 1984, noting the county’s contribution to Virginia’s tax base, and its boom in high-tech industries, noting that ”Fairfax should be perceived as ‘the goose that laid the golden egg.’”

In response, Bob sent a letter of apology: “I was taught that one should never be insulting unintentionally.  That comments made in jest might have been taken seriously and have given offence, I find truly distressing.” 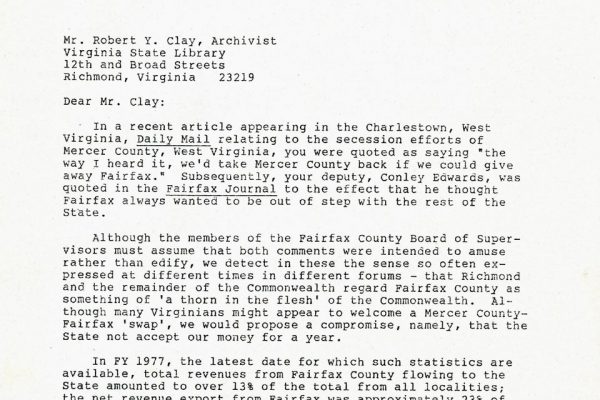 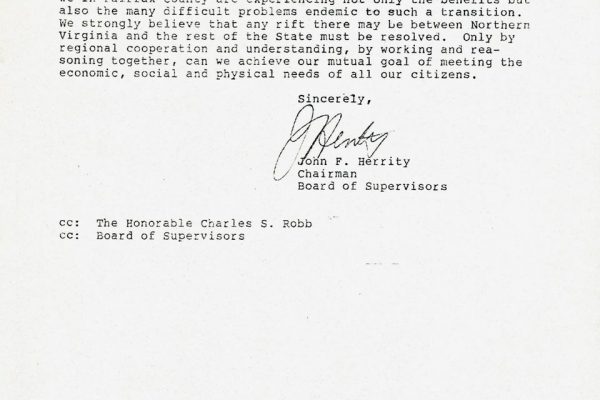 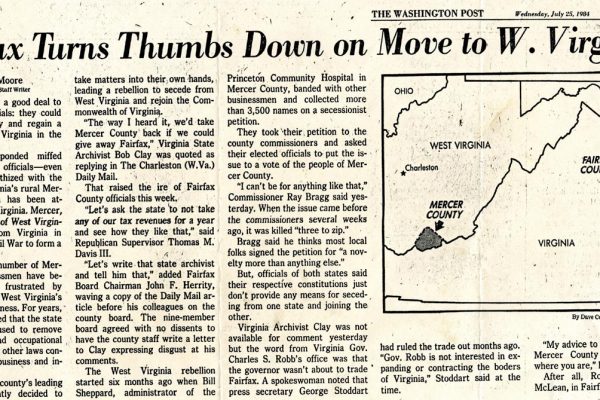 Bob may have offended others, too, when he made comments about the research methodology of library users in a 1998 article in the Richmond Times-Dispatch entitled “Quest into the Past.”

“The most startling discovery people make – and almost all of them make it – is how dumb they are and how little they know about something they thought they knew so much about. There’s this temptation to start with Charlemagne and work down, but it doesn’t work that way.”

But years later, in a speech he delivered to a genealogical conference shortly before his retirement, he remarked, “The archivist also learns from the researcher.  Many of my best teachers and trainers have been patrons who shared so generously of their research knowledge. If you have any doubts as to the generosity of the patrons of the Virginia archives, just notice when you are there who our special helpers during this conference are – they are knowledgeable patron-volunteers.”  The patrons at the Library of Virginia “have enriched my life over the last quarter century in the archives, he remarked, “I owe all of them a great personal debt of gratitude – those who are now gone and the many more who are still avidly searching – and sharing.”

Indeed, Bob did not always possess the great wealth of knowledge on Virginia’s records for which he came to be known.  In another speech, he humbly thanked one individual who made an impression on him on his first day of work at the Library.

“I arrived in the archives in October 1970 knowing little of Virginia and less of genealogy.  On my first day I was shown around the institution by Mr. John Dudley, who was then assistant state archivist.  Mr. Dudley began that day to teach and until his retirement he never ceased to share his vast knowledge of Virginia’s records.  Mr. Dudley has my everlasting appreciation for his efforts in my behalf.  And I do hope those efforts were not entirely in vain.  He remains my mental image of what the word ‘gentleman’ means.”

Like John Dudley, Bob Clay never stopped sharing his knowledge of Virginia history and resources.  Some of us remember the ways, patiently and sometime impatiently, in which he passed on that knowledge.  Now, thanks to the bequest of his personal papers to the Library of Virginia containing his research, writings, speeches, and other materials, future patrons can continue to learn about Virginia’s records.