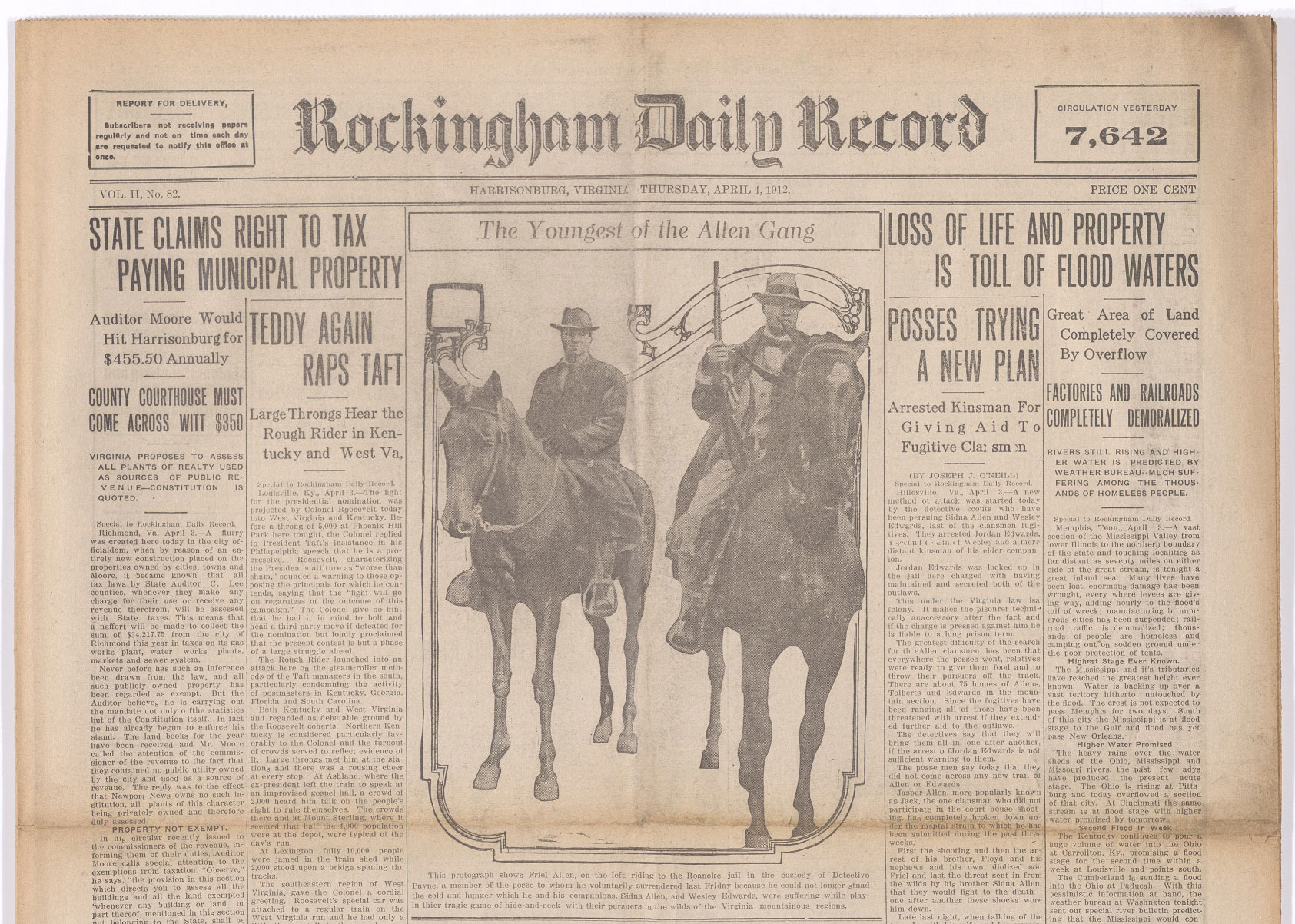 This month marks the 100th anniversary of events surrounding the Allen family and the infamous “Hillsville Massacre.” The sensational coverage and gripping photos of the characters and events surrounding the courtroom shooting captured America’s imagination in 1912 and until the sinking of the Titanic a month later, the “Hillsville Massacre” took up a good deal of front page copy in newspapers across the country.  In the coming days, to mark the anniversary, the Virginia Newspaper Project will feature entries on the events and people involved accompanied by front pages, articles and photos from newspapers in the collection of the Library of Virginia and from the digital newspaper resource, Chronicling America.

To find out more about the “Hillsville Massacre,” please visit our other blog posts, from the  Archives Division at the Library of Virginia.

The front pages shown below represent only a small sample of the newspapers that covered the story across the nation, many of them reporting on the massacre the same day it happened. These pages can be found at Chronicling America. 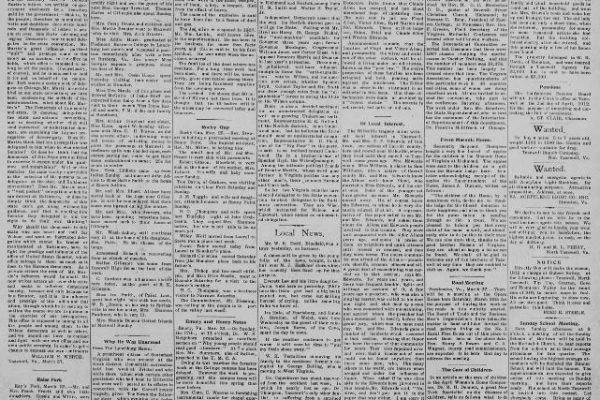 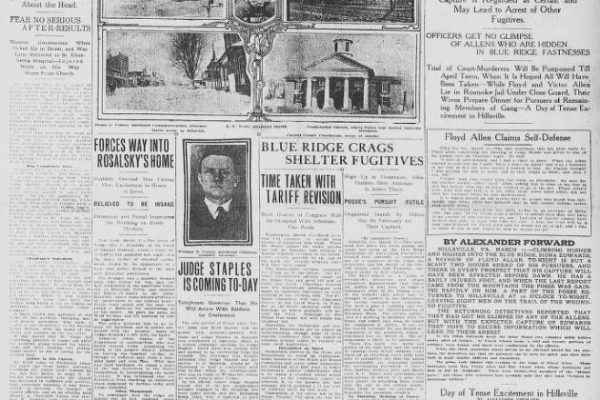 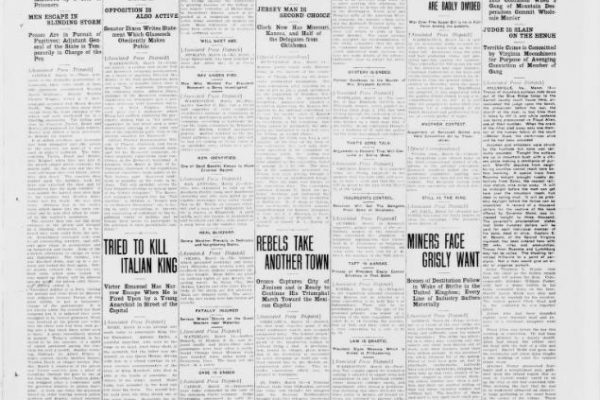 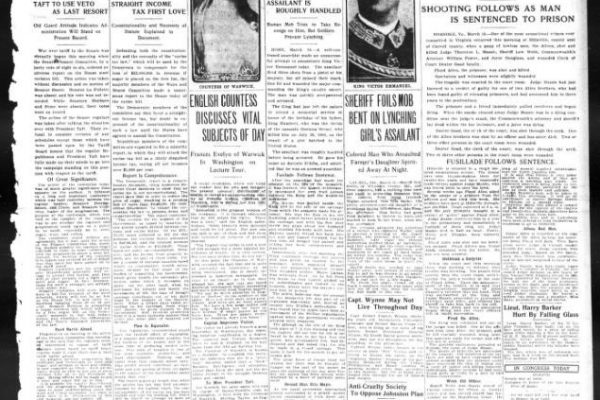 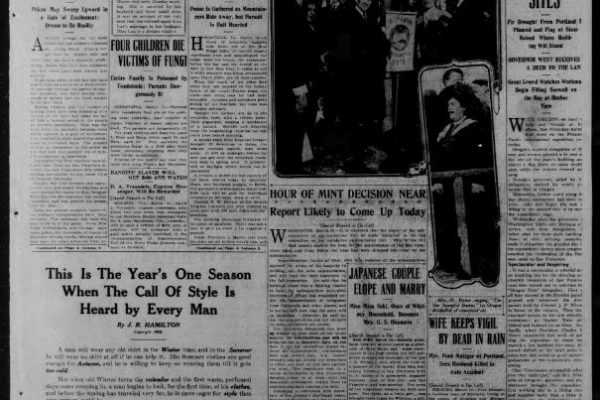 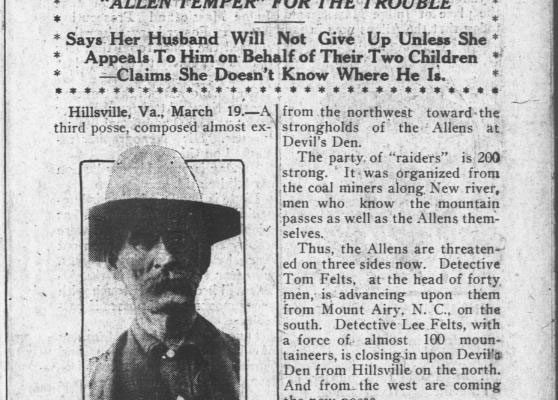 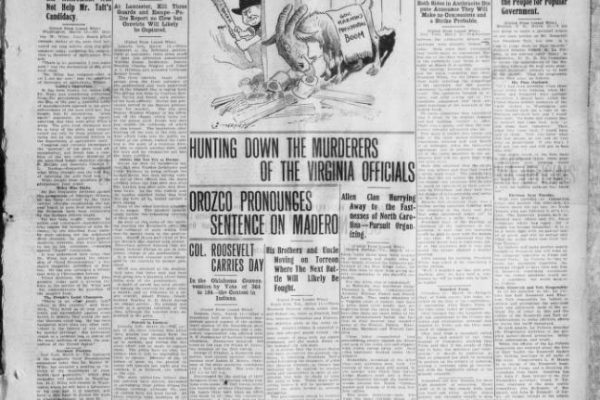 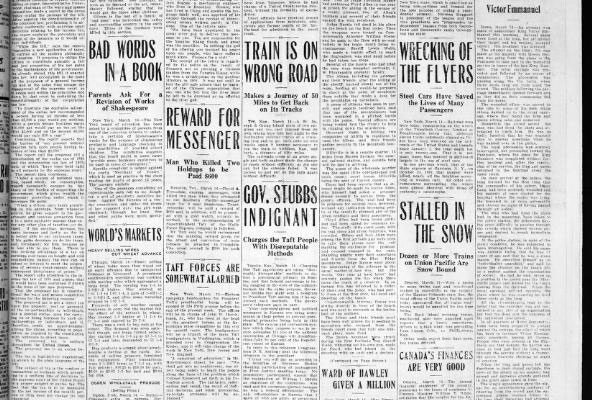 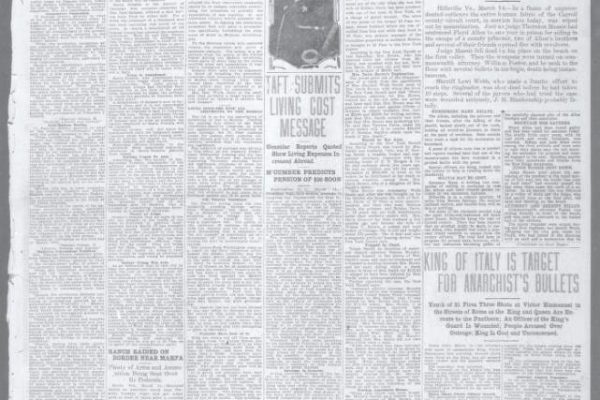 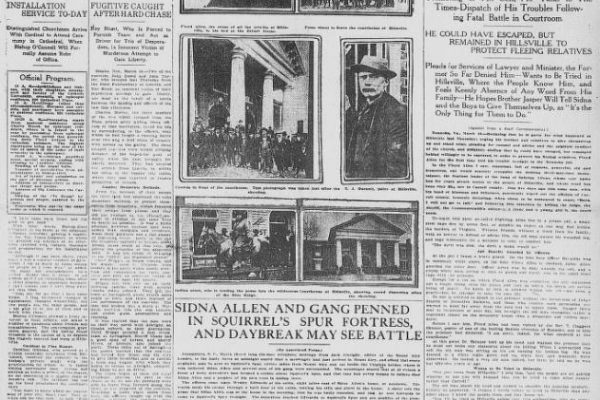 In 1912, Carroll County, Virginia was a sparsely populated Appalachian farming region with few modern conveniences. Located in the southwestern part of the state and bordering North Carolina, it had no paved roads and only a single phone line connecting Hillsville, its county seat, to nearby Galax, Virginia. Its remote location and lack of modern convenience made it a world unto itself.  On March 14, 1912, however, tragedy propelled this small farming community into the national spotlight when Carroll County native Floyd Allen, a prominent businessman and large land owner, became the central character in a controversial courtroom shooting that left five dead and seven wounded.

Events leading up to the courtroom shooting had taken place more than a year earlier in December 1910 when Floyd Allen’s nephews, Sidna and Wesley Edwards, were involved in a brawl outside of a religious service conducted by their uncle, Garland Allen. Charged with disturbing a religious gathering, Floyd advised his nephews to go to nearby Mt. Airy, North Carolina until he could arrange bail and defense attorneys for the young men. Floyd had a history of evading the law for his own crimes using his money and influence and he was willing to do the same for his family.

In April 1911, as Floyd was riding back to his home from Hillsville, he encountered two deputy sheriffs who had apprehended his nephews in Mount Airy without extradition papers. “I knew that the officers had brought them from North Carolina without any legal authority,” he claimed, “As I approached, [one of the deputies] drew his gun on me and kept it pointed at me for some time.(Travesty of Justice p. 20)” The officers, driving a buggy, had Sidna and Wesley Edwards secured with handcuffs and ropes and the site of his nephews in restraints enraged Floyd. He demanded that they be freed and allowed to enter the court “like gentlemen.” 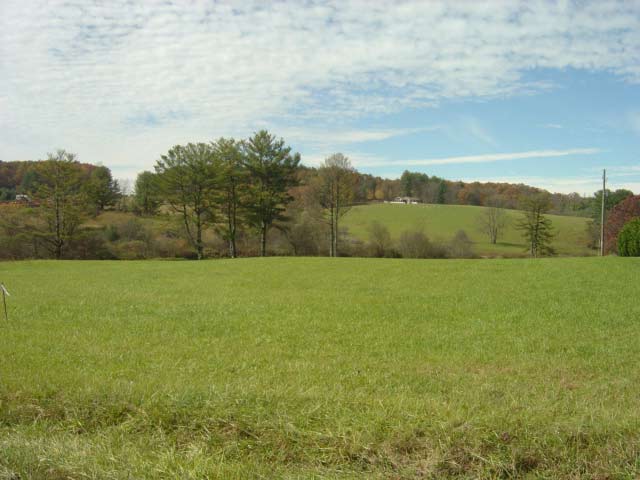 “I had been an officer in that county for years,” Floyd explained, “Seldom was it necessary to handcuff prisoners. I felt that the Edwards brothers were being persecuted.(Travesty of Justice p. 21)” The sheriffs refused to remove the restraints, so Floyd wrestled the gun from Deputy Samuel and then beat Samuel with his own gun. Floyd did deliver his nephews to court and the young men served brief sentences in the county jail. Floyd Allen’s troubles, however, had just begun. For his role with the deputies, he was indicted for attacking the men and brought to trial nearly a year later in March of 1912. 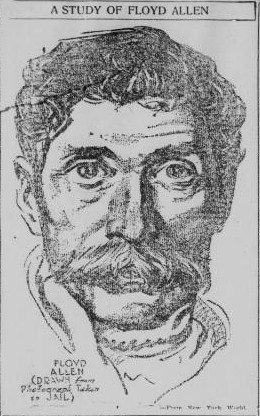 It was no secret that the Allen family had a history of breaking the law. Floyd and his brother Jack were known moonshiners and his brother Sidna had been charged with counterfeiting in North Carolina. In 1904 Floyd was convicted of assaulting his neighbor, Noah Combs, over a land dispute resulting in a shootout in which both were badly wounded. Floyd’s punishment for the crime was an hour in jail and a $100 fine, but he appealed the sentence and was ultimately pardoned by Governor Andrew J. Montague. In another violent encounter, Floyd shot his own brother, wounding him in the head. It was also rumored that Floyd had killed a man for hunting on his property.  In spite of these violent crimes, Floyd Allen never served any jail time.

Political tensions created even more strain between Floyd, a staunch Democrat, and the local law bureaucracy, almost exclusively controlled by Republicans. Floyd claimed that Deputy Clerk Dexter Goad, a Republican, had promised to arrange a jury which would acquit him if Floyd would agree to pledge his political support in Goad’s favor. Floyd predictably refused. Floyd’s hot temper, his previous successes in outmaneuvering the law and the underlying political tensions of the time created the perfect storm for what would take place on March 14, 1912.

The case against Floyd was heard on March 13, 1912. The presiding judge at the trial was Thornton L. Massie, a friend of the Allen family and fellow Democrat. Floyd’s defense attorneys were Walter Scott Tipton and David Winton Bolen, retired Carroll County judges. The state’s Commonwealth’s Attorney was William M. Foster, a converted Republican and political enemy of the Allens. On the day of the hearing, the small courtroom was packed with people, many of whom were carrying guns. Floyd Allen, and his attending family, including Sidna Allen, Claude Allen, Wesley Edwards, Sidna Edwards and Friel Allen, were all reportedly carrying weapons. Most of the Republican officials in attendance were armed as well, anticipating trouble from the notorious Allen clan. Perhaps the result of death threats from Floyd, Deputy Samuel did not attend the trial to offer his testimony.

After the hearing, the jury found Floyd guilty and sentenced him to a year in the state penitentiary. Although Floyd’s lawyers requested the verdict be overturned, Judge Massie rejected the appeal, but agreed to hear additional testimony on Floyd’s behalf the next day. 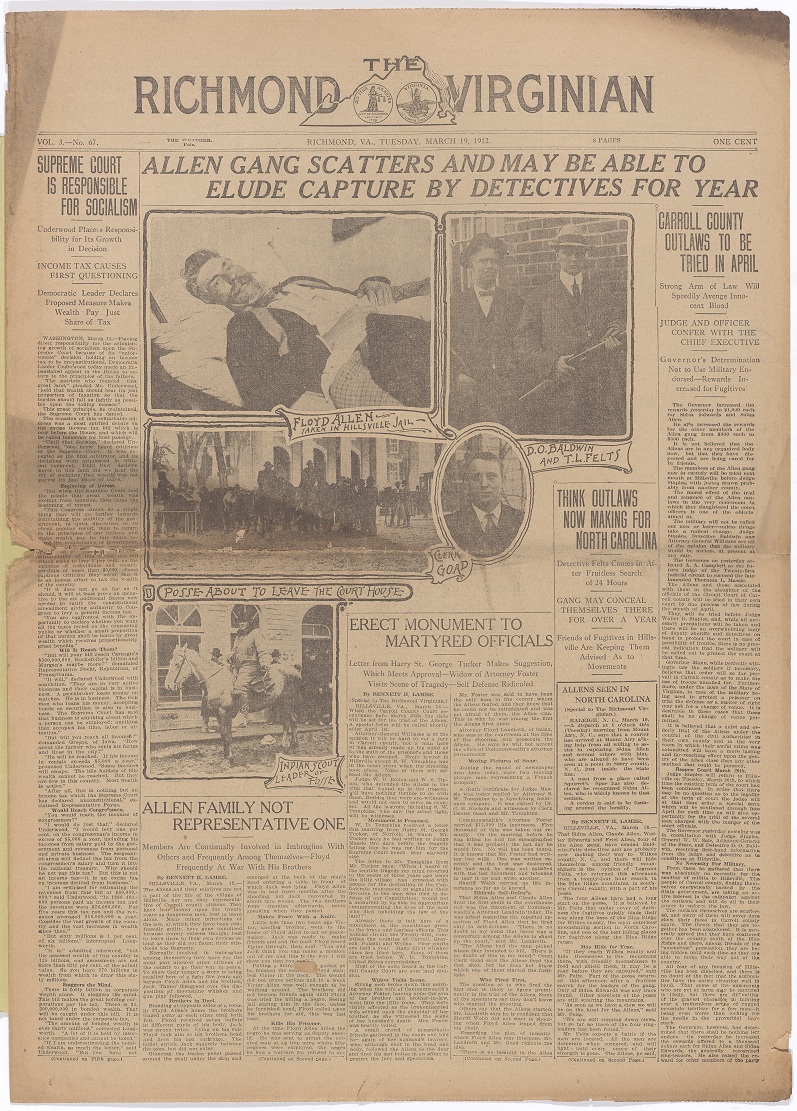 Judge Massie, however, ordered that Floyd be returned to jail until court resumed session the following morning. Apparently Sheriff Webb and Judge Goad expressed pleasure with the judge’s ruling and Floyd, in a fury, cried, “Gentlemen, I ain’t a going!”

No one has ever been sure what happened next. According to Floyd, he went to pull a subpoena out of his jacket which was mistaken for a gun, but other witnesses said they saw him pull a gun from his jacket. The Allen family claimed that court officers fired the first shots on Floyd, but other witnesses said that Claude Allen, Floyd’s son, shot first. In either case, what followed those initial shots was a melee of gunfire from all directions.

According to Floyd Allen, the room was “almost black with smoke, making it difficult to see. But I aimed my pistol as best I could and tried with all my might to put Goad down. . .The acrid odor of burning powder filled the room. It was stifling; one could hardly breath. . .screams, groans and cries continued to mingle with the roar of pistols. (Travesty of Justice p.48)” 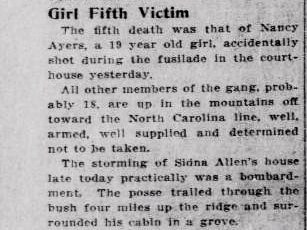 When the shooting finally ceased, Judge Thornton Massie and William Foster, Lewis Franklin Webb, a Carroll County Sheriff, Augustus Fowler, a juror, and Nancy Ayers, a nineteen year old witness against Allen, were either dead or mortally wounded. Floyd Allen was wounded in the leg, Sidna Allen suffered a minor wound and Clerk Goad was shot in the face, but survived. With the exception of Floyd, who was too gravely injured to travel, and his son Victor, who stayed behind to care for his father, the other Allen men fled Hillsville to hide out in the Blue Ridge Mountains.

Governor Mann called on the Baldwin Felts Detective Agency of Roanoke for a full fledged manhunt of the Allens. With militiamen, bloodhounds and posses, the organization set out to capture the fugitives, dead or alive. Because he couldn’t go far, Floyd Allen and his son were apprehended the next day, March 15, at the Hillsville Hotel. The men did not resist, though Floyd unsuccessfully attempted to commit suicide by cutting his own throat. The posse apprehended Claude Allen, Sidna Edwards and Friel Allen about a week later. Sidna Allen and Wesley Edwards proved more difficult to catch, evading the agents for exactly six months until they were captured September 14, 1912 in Des Moines, Iowa. “When they arrived in Roanoke on Sept. 16, 1912,” wrote Ralph Berrier Jr., “Sidna and Wesley were paraded down Campbell Avenue in an open touring car, as if they were prize trophies. (Roanoke Times, March 11, 2012)” 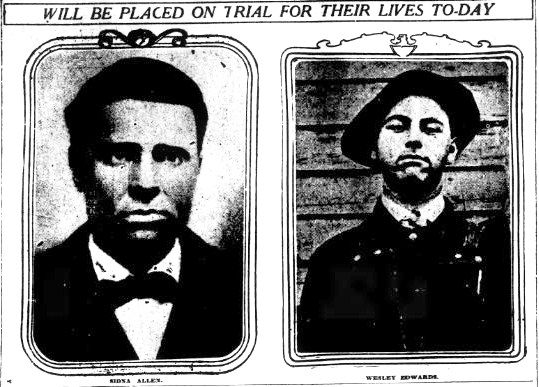 While Sidna and Wesley were still on the run, the state began to prosecute the other Allen men involved in the courtroom battle. The trials took place in Wytheville from April-December 1912. The prosecution did not use ballistics or autopsy reports to prove who was responsible for the shootings, but instead tried to prove that the Allen men had premeditated the attack, which would have made all of them equally liable for the deaths. On May 16 the jury convicted Floyd Allen of first degree murder.

Claude was found guilty for the death of Attorney Forster, and was found guilty of second degree murder for the death of Judge Massie on the grounds that premeditation had not been proven. Claude Allen was also tried for the murder of Foster. The first trial ended with a hung jury, but the second trial ended with a conviction of first degree murder.  For their crimes, Floyd and Claude were sentenced to die in Virginia’s electric chair. The other Allen men received lesser sentences, with Friel Allen and Sidna Edwards given eighteen year prison terms, Wesley Edwards sentenced to twenty seven years and Sidna Allen given thirty-five years.

The date of execution was set for March 28, 1913; however on March 27, 1913 a bizarre turn of events took place that almost prevented it. Governor Mann was traveling to New Jersey and the Allen defense team asked Lieutenant Governor J. Ellyson to act as chief executive and commute the sentence in Mann’s absence. Ellyson conferred with Attorney General Samuel Williams on the constitutionality of such an action and the execution was postponed in order to settle the question. Upon hearing the news of what was going on back home, Governor Mann returned to Virginia on the first train available to stop the high jinks. He arrived early on the morning of March 28th and ordered the execution to be carried out that afternoon. 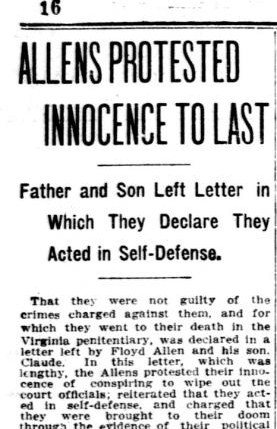 At 1:30 p.m. on March 28, 1913 Floyd Allen was executed. His son, Claude, was executed minutes later. Both men reportedly died bravely. Despite Victor Allen’s objections, their bodies were displayed at Bliley’s Funeral home in Richmond, Virginia where more than twelve thousand people came to view them. Floyd and his son were transported home and buried in a cemetery near the Blue Ridge Mountains on March 30, 1913. Five thousand people attended the funeral service.

Headlines from the Richmond Virginian and the Rockingham Daily Record. Photos are of original newspapers in the collections of the Library of Virginia. 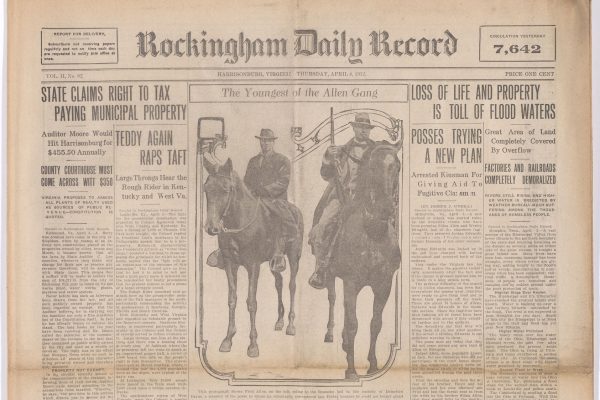 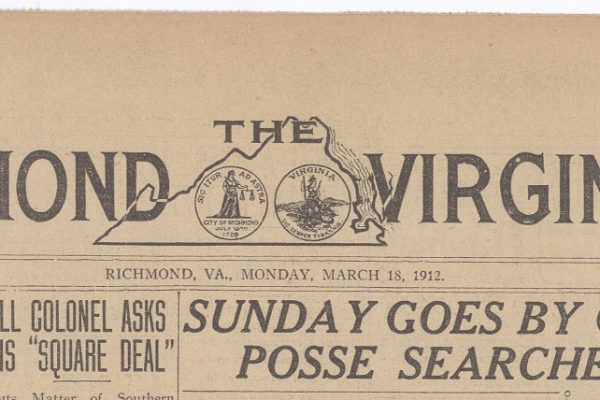