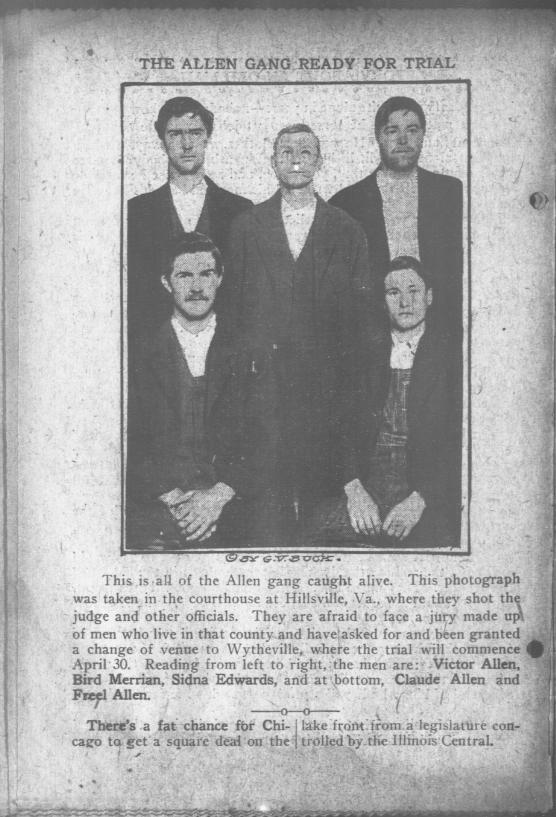 “Hillsville Massacre” in the News

The dramatic courtroom incident, coined variously the “Hillsville Massacre” and the “Courthouse Tragedy,” immediately became a huge news story and newspapers nationwide covered it in colorful, and often inaccurate, detail. For several weeks after the courthouse shooting, front pages in Virginia dailies like the Times Dispatch and the Rockingham Daily Record obsessively covered events surrounding the Allen clan with large photos and in depth articles on their front pages.

A story like the “Hillsville Massacre” was perfect fodder for contemporary newspapers, as the early twentieth century papers were undergoing a dramatic transformation from their staid precursors. As the nineteenth century came to a close, advanced industrialization and better public education created an exponentially growing audience of newspaper readers. 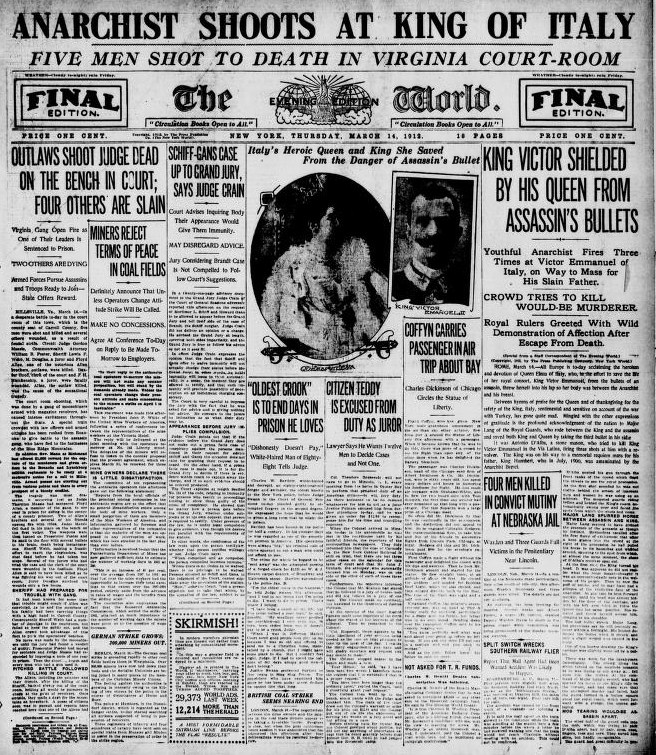 Publishers realized newspapers could be a lucrative medium not only to inform, but also to entertain. At this time two important newspaper men, Joseph Pulitzer and William Randolph Hearst, catered to this ever growing audience through new journalistic techniques still used in newspapers today. The fierce competition between Pulitzer’s World and Hearst‘s New York Journal led to innovations to attract readers such as the heavy use of photographs and illustrations, bold headlines and dramatic coverage of often gruesome and spectacular events. In many cases, facts were altered to make stories more sensational.

The Floyd Allen story was perfectly suited for the newspapers of 1912, both for how it read and for its abundant visual offerings so it is no surprise that the court room shoot out was heavily publicized in newspapers across the nation.  The nature of the crime, the story’s setting, its aftermath and the men involved offered a tantalizing ongoing saga to curious newspaper readers.  Undeniably, it was attention-grabbing that such a grizzly episode could take place in the most unexpected setting–a courthouse in quiet, rural Virginia. If such a violent event could happen there, it could happen anywhere! And the cast of characters involved could not have been more captivating. In some reports the Allen men were portrayed as wild and dangerous moonshiners, lawbreakers unafraid to make local streets run red with blood. Newspaper images of the doomed Allen men created wonderfully haunting photos for an engrossed mass audience.

The Chicago Day Book, a penny tabloid printed for the working class, probably covered the story in closer detail than any other newspaper outside of Virginia. When it first broke the news of the courthouse shooting, it wrote in melodramatic language, “Judge Massie denounced Allen as a man who for years had defied the law, and then passed sentence of three years’ imprisonment,” it went on, “The moment sentence was pronounced, Allen made a quick movement. There was the roar of a heavy caliber revolver, a flash of flame and smoke, and Judge Massie crumpled up and slid from the bench to the floor.(Mar. 14, 1912)”

The Day Book also evoked mountaineer imagery in its dramatic portrayals of the Allen clan, writing, “From the mountains came a message from Victor Allen, older brother of Floyd, and leader of the clan. It said that if Floyd Allen were not released, the Allens would make the streets of Hillsville run red with blood, and prophesied an early death for judge Massie.(Mar. 14, 1912)” 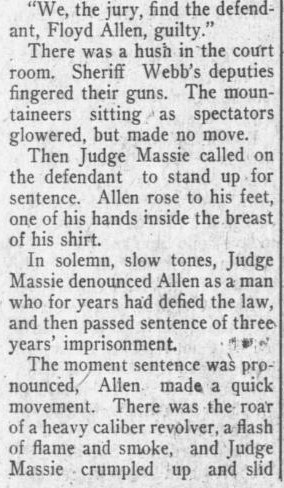 The Utah Evening Standard’s headline of March 14, 1912 read, “Judge, Sheriff and Attorney Shot by Moonshiners in Virginia.” No doubt Floyd Allen was a moonshiner and a scofflaw, but he wasn’t quite the outlaw hillbilly the newspapers portrayed. Owning an estate worth $10,000 to $20,000 accumulated as a well-respected and hard working businessman and landowner, he was considered a local success story.  Floyd Allen was known by many not only for his irascible nature, but also for his wealth and generosity.