Mythology of the Allen Clan

As the date of execution of Floyd and Claude Allen approached, public support for the doomed men grew. Many people believed Floyd and Claude were no guiltier than the other Allens involved in the courthouse shooting and thought execution an unfair punishment.  It was also brought to light that other people in the courtroom, like Dexter Goad, were probably just as responsible for the five deaths as any of the Allen men. Petitions pleading for executive clemency were submitted to the governor with tens of thousands of signatures. 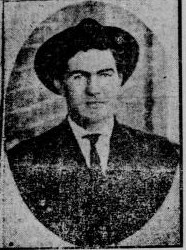 Richard Byrd, Reverend George W. McDaniel and US Senator Claude A. Swanson joined the fight to stop the executions, but Governor Mann, a steadfast supporter of capital punishment, was unsympathetic to the condemned men. 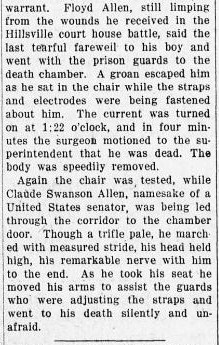 The date of execution was set for March 28, 1913; however on March 27, 1913 a strange turn of events occurred that almost prevented it. While Governor Mann was traveling to New Jersey, the Allen defense team asked Lieutenant Governor J. Ellyson to act as chief executive in Mann’s absence to commute the sentences. Ellyson conferred with Attorney General Samuel Williams and postponed the execution in order to settle the question on the constitutionality of commutation in Mann’s absence.

When Mann heard the news of what was going on back in Virginia, he headed back on the first train and ordered the execution be carried out that afternoon. On March 28, 1913 at around 1:30 p.m. Floyd was executed in Virginia’s electric chair. According to the Rice Belt Journal, Floyd Allen “still limping from the wounds he received in the Hillsville court house battle, said the last tearful farewell to his boy and went with the prison guards to the death chamber. A groan escaped him while the straps and electrodes were being fastened about him.” His son, Claude, was executed minutes later.

“Though a trifle pale,” wrote the Rice Belt Journal, “[Claude] marched with a measured stride, his head held high, his remarkable nerve with him until the end.” Their bodies were displayed at Bliley’s Funeral home in Richmond, Virginia, despite Victor Allen’s objections, where more than twelve thousand people came to view them. They were transported home and buried in a cemetery near the Blue Ridge on March 30, 1913. Five thousand people attended the funeral service. 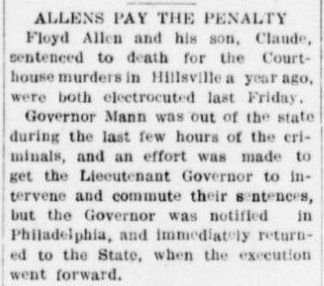 The details of the Allen family’s story, from the dramatic courtroom fight, to their escape and capture, to the trial and punishment, to the final remarkable days before and after their deaths, inspired a mythology to develop around them. Surely, the melodramatic newspaper coverage contributed to the myth as well. Folk songs were written about Sidna and Claude, several books were written about the event and stories of the massacre have been past from one generation to the next. Many people from this region of Virginia can still tell the story of the “Hillsville Massacre” and claim to have some connection to it.