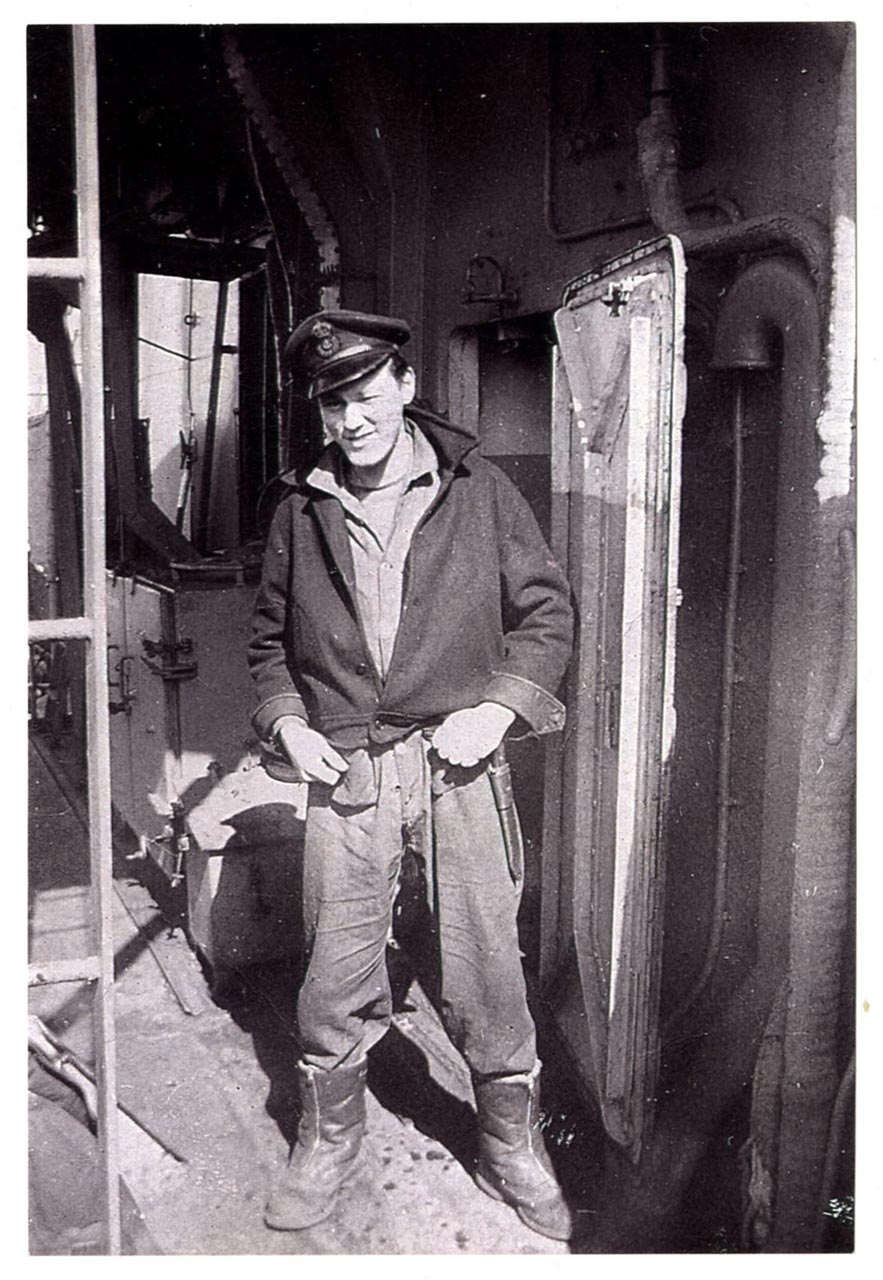 It is rare for anyone to be directly involved in an event that can be labeled, without exaggeration, a turning point in world history.  The recollections of those who have done so take on a special significance for the rest of us as we try to imagine how it must have felt to be part of an extraordinary moment in time.  As archivists, we can only hope that these recollections are recorded and preserved before memories fade and entire generations pass away.

Today, on the 68th anniversary of the Allied invasion of Normandy, one of those voices speaks through the June 1944 diary of Douglas J. Raymond (1921-1994), an acting petty officer in the Royal Canadian Navy.

A native of Rosemont-LaPetite-Patrie, Quebec, Canada, Raymond became a United States citizen and resident of Virginia after the war.  While keeping this diary, he was serving aboard the destroyer HMCS Saskatchewan providing anti-submarine protection for the landing forces.

Raymond’s widow, Mary, donated the diary to the Library of Virginia last July.  In a note she tucked in with the little book, she apologized for her late husband’s spelling, saying that it was more phonetic than technically correct.  No apologies are needed, as the diary is an honest, sensitive, and exciting account of what a 23-year-old man saw, thought, and felt in the midst of intensely stressful circumstances.

Recorded in a thin, pocket-sized notebook, the diary is dated 4-24 June 1944.  Seeking to cover the entire event, including the lead-up to the invasion, Raymond seems to have made the 4 and 5 June entries retrospectively, with the narrative switching to the present tense on 6 June.

The first entry, 4 June 1944, states simply, “In English Channel cleaning out German subs.”  The next day’s entry marks a stop in Plymouth, England, to load up on fuel and “more d/c” [depth charges], before sailing that night “for unknoon destonation for the greatest Invation ever known.  Our nervs were very tense.”

1st the air force laid smoke screens between us and the french coast.  what a sight.  then we blasted the hell out of the German costal guns on the cost of France through the smook screen, shell after shell.  then com the envation barges packed with soldiers.  thousands of barges.  I can’t express our feeling, except we all have tiers in our eyes and our hearts are in the pit of our stomacks.

we are just a stones throw from shore.  shells landing all arround.  blazing planes crashing to the earth and water.  ships dissipearing beneath the surface and they say this is Gods world.  will we ever get to our love ones will we. 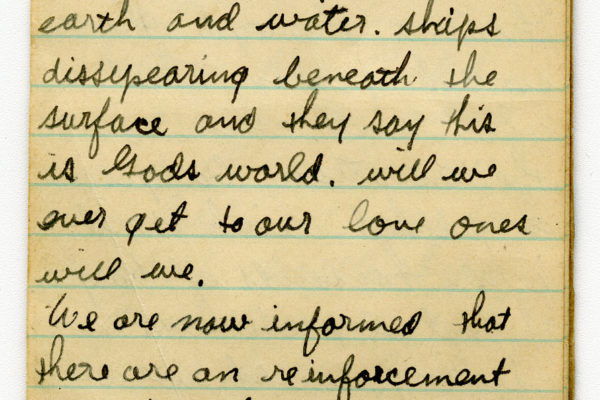 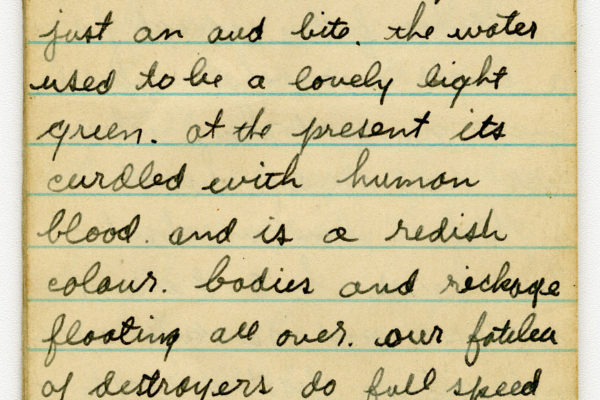 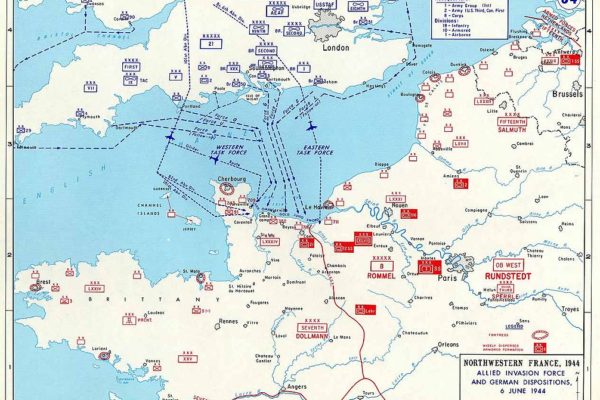 The crew gets word that approximately 200 German reinforcement subs are headed north from the Bay of Biscay, and the Saskatchewan (“now leaving the human hell”) sails to meet them.  As they get on their way, Raymond looks toward the shore and sees the invasion troops “are still poaring in,” while out to sea he observes “enmy subs.  so many I cant count them.”

the battling is fearce.  but we cant let them pass us.  part of our guns are facing the sky blasting at all kinds and tips of gerie [German] planes.  the other guns are blasting subs on the surface…d/c are rooling off our decks like pees on subs beneath the surface trying to sneek under us to get at our troops.  Im fighting like mad for a personal reason and I hop one of these subs is the one that Im looking for.

The “personal reason” Raymond alluded to was the loss of his brother Russell, who was killed on 7 May 1944 when his ship, the HMCS Valleyfield, was torpedoed by a German U-boat in the North Atlantic.  Just one month later, surrounded by death and with his own life in danger, Doug Raymond had a heavy heart.

I never thought the young men lik us could stand sutch a cean.  and be so hard and heartless.  without sleep.  and just an aud bite.  the water used to be a lovely light green.  at the present its curdled with human blood.  and is a redish color.  bodies and reckage floating all over.  our fotilea of destroyers…sig sag.  to try and avoid gerie bombs.  which explode on all sids of us.  splashing that dirty water.

On the night of 6 June, with word that eight German destroyers (in addition to the aforementioned subs) were sailing in their direction, Raymond and his fellow crew members could still “hear the roar of the army guns ashore in France.”  They got in about an hour and a half of sleep before being summoned to action – two of the German destroyers were in sight, guns blazing.  The Saskatchewan and other ships in the flotilla returned fire and sunk them both.

The next day began off the coast of Brest, France, with orders to stop a group of Nazi destroyers, sweepers, and subs from fleeing the Channel.  That night brought four hours of continuous action (“more torpedoes around than water”), during which two torpedoes exploded in the ship’s “cat geer” [Canadian Anti-Acoustic Torpedo gear].  Further engagement with submarines followed in the early morning hours of 8 June, after which Raymond wearily wrote, “lovely moon light.  but we are sore all over and very tired.”

The evening of 8 June found Raymond “not feeling so hot.”

a gerie bomber attacked us and mad a lucky hit dident do much damage.  but the explosion nocked me up against the torpedo tubs and gave my back an awful wollop.  the musick on the radio is lovely wish I were home.  if I get home it will tak a stick of TNT to meove me.

Two hours later, having been alerted to an imminent engagement with five German destroyers and an untold number of subs, Raymond wrote that, “I cant explane how I feel.  exept at a time like this its our familys we all think of.  were doing it all for them I hope they can see it our way.”  The next day as he recounted the evening’s “exciting…wonderful” events, he recalled watching another of his flotilla’s ships sink a German destroyer.

It was a perfect sight to see thos two destroyers monover in the moonlight trying to get in possession to begin to fire.  then the chance came.  our ship opened a brod side it blue her funnell clear off the oper deck.  then the smoke seemed to blind her crew.  because her shots seemed to be to high or to low brod side after brod side then she settled to one side and sunk.  our sirens all sounded in Victory.  it seems a dam shame but that’s war.

Over the course of the next two weeks, the entries become less detailed.  The Saskatchewan remained in the Channel for the most part, with some time on shore in England to load up on ammunition and fuel, and to repair damage to the vessel.  His 23 June entry records their participation in an attack on German coastal guns some 100 miles south of the invasion site: “what a surprise he [the enemy] got when the fog lifted and 4 distroyers were there looking him in the face.”   The next day, in his last entry, the euphoria has worn off.  He writes only, “June 24/44 still battling subs. (Im fed up.).”

After the war, Raymond returned to Canada, where he spent a year in a remote cabin in Arundel, Quebec, needing solitude to process his war experiences and the loss of his brother.  In the late 1950s, he moved to Staunton, Virginia, for a job, and there decided to become an American citizen.  He later moved to Chester, Virginia, where he met Mary Keifer in 1969.  The two fell in love, marrying in 1974.  It was the second marriage for both, and a happy one.  Raymond helped raise Mary’s son, Chris, as if he were his own.  They built a quiet life far from the horrors of war.  He occasionally shared humorous stories from his time in the service, keeping the difficult memories locked inside.

Doug Raymond passed away on 4 June 1994, fifty years to the date of his first entry in the diary.  His memory as a kind husband and father is still deeply cherished by his wife and stepson.  His wartime service and vivid account of three historic weeks can be appreciated by us all.

The Douglas J. Raymond Diary (LVA Accession 50043) is available for research at the Library of Virginia.