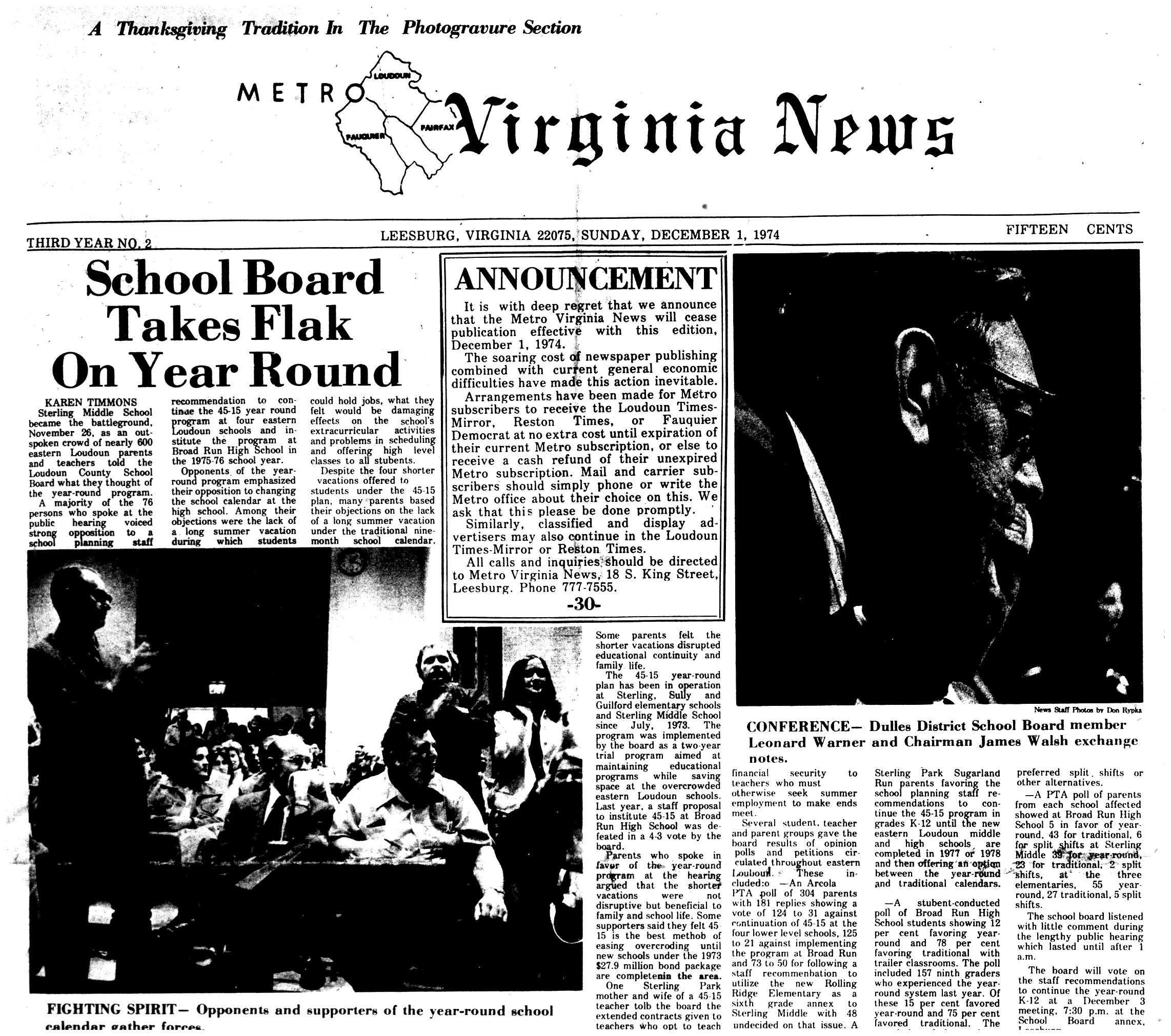 An earlier posting promised some additional remarks about a pair of recent arrivals to the LVA/VNP microfilm collection:  the Metro Virginia News and the Public Pamphlet of Leesburg, Virginia.  Rather than just a masthead, as earlier, let’s take a look at a complete front-page for each of these Northern Virginian papers.  First the weekly Metro Virginia News: 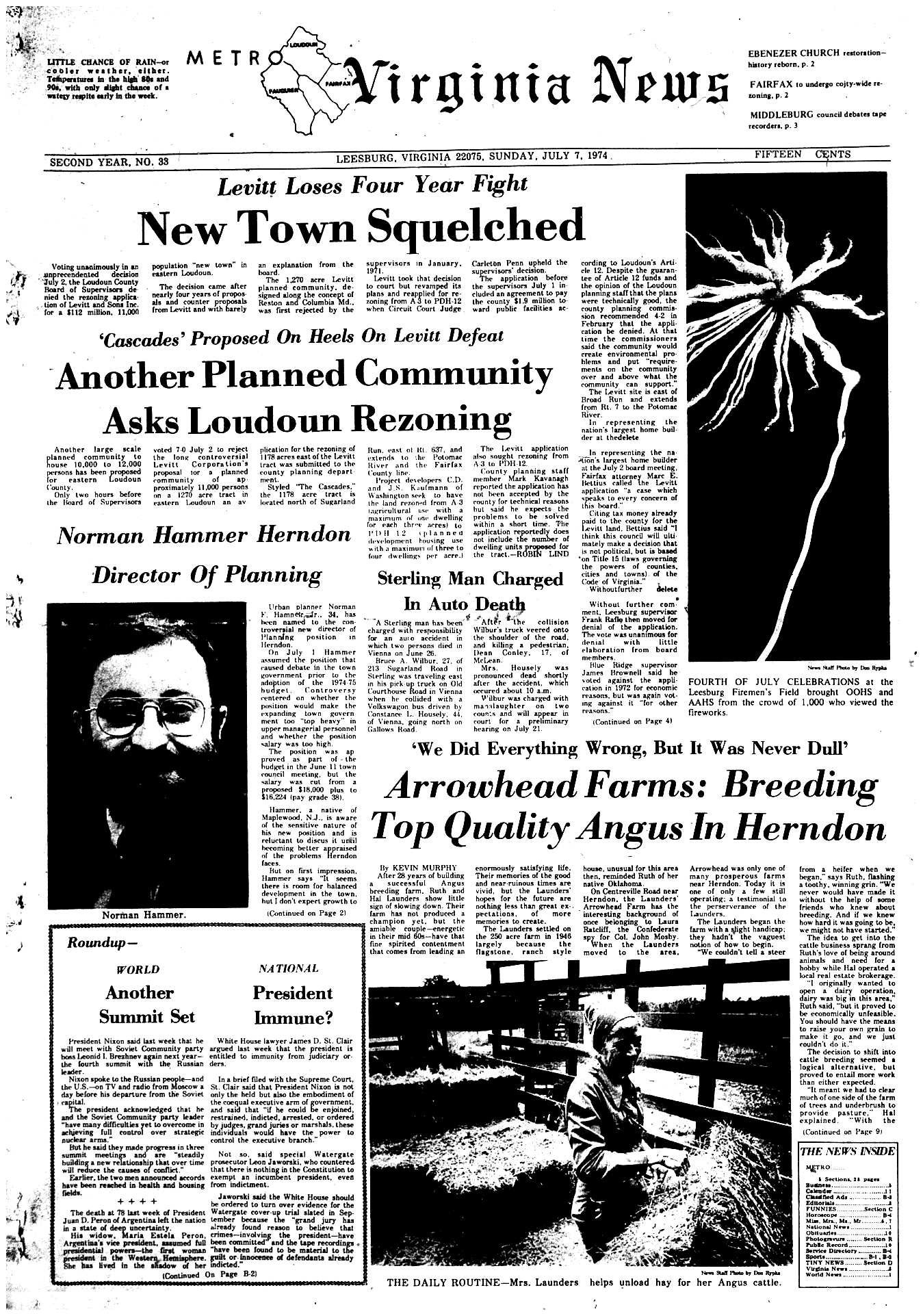 This copy of July, 1974 is an example of the paper at its best. It provides to readers detailed coverage of a local governing decision relating to an issue of increasing concern and debate: managing economic growth. The goal was to provide an alternative to the more established Loudoun Times-Mirror, a paper without competition since the mid 1950’s, and to the advantage of interested readers, they often succeeded. But, as journalist A. J. Leibling reminds,  “The function of the press in society is to inform, but its role in society is to make money.”  The enterprise was ill-timed.  It coincided with a recession.

The Metro Virginia News published for just over two years, November of 1972 until December 1974, reaching a circulation of about 4000, some 8000 shy of the Times-Mirror.  A financial sinkhole, not profit, beckoned.  The newspaper, as well as ownership of the more solidly grounded Fauquier Democrat to the county south, was sold to Arthur Arundel, publisher of, pause, the Times-Mirror.  The Democrat continued while the Metro Virginia News, to no one’s surprise, was shuttered.

But to return to the paper’s origin – an experienced editor, a young and extremely capable staff cannot simply will itself into being.  Who provided the catalyst of money?

Again Leibling, a remark in greater circulation than of previous:  “Freedom of the Press is guaranteed only to those who own one.”  Helmi Carr, unhappy with her representation in the local press (the Times-Mirror, a safe assumption), decided to own one.  She had the means.  A sizable fortune was delivered to herself and her husband in the mid 1960’s with the sale of their company, DECO, a military contractor, to Westinghouse.  And soon following, with the death of that husband in 1967, a fortune for which she would be sole steward.   For the remainder of her lifetime (1910-2006) her gusto and imagination kept the action of this wealth churning in the economic and public life of Leesburg and the region’s counties.  For example:  The Metro’s offices?-they were located within her renovated building and sharing an address with her bank, North American Bank and Trust, later sold to Nations Bank which was probably not far from the Loudoun Museum, which she founded, or the Loudoun County Chamber of Commerce which she once chaired. In sum, a force; and appraising your respective force from an altitude of 4’10”.  For a wider overview of her life click here and/or here.

The newspaper announced its demise above the fold of its final front page:

Given the circumstances, the author might be forgiven for omitting the name of the buyer.  The -30- at the finish, by the way, derives from newsroom slang meaning, “end of story”.  Almost thirty-eight years later, the Virginia Newspaper Project is happy to acknowledge Times Community Newspapers and its current publisher, Peter Arundel, for depositing the Metro Virginia News to the care of the Balch Library in Leesburg, the preservation of the paper in bound volumes, and for permission to loosen their bindings, thus allowing for a superior film image.

If you read the lead story under the Metro headline “New Town Squelched” reproduced at the top of this blog, you’ll discover that the chief squelcher in question was Frank Raflo, enforcing a philosophy of slow or affordable growth while acting in his capacity as the Leesburg representative on the Board of Supervisors.  In this long life (1919-2009) one wonders if anyone else in Leesburg could have acted not only in so many parts but also performed in those roles with anything like the same participatory zeal.  Among them:  local historian, Leesburg mayor and merchant (a dress store), board member (many) and land use planner (an important first draft), radio host, plus, in a favorite setting, the Leesburg Restaurant, as a gregarious contributor to a municipal salon.  Whatever the social context, he was a contentious, spirited debater, yet one who could stake a position without alienating those in opposition.  Nothing I’ve read here, or even here, or heard (a conversation with Mary Fishback of the Balch Library whose biographical notes were also helpful) suggests anyone who doesn’t deserve a park named after him-and, yes, there is such a park-Raflo Park.   Yet still omitted here is the occupation for which he had likely the highest affection and of most interest to this blog, his newspaper experience. It arrived early, just after graduating (Phi Beta Kappa) from the College of William and Mary when he discovered himself the precocious editor of the Loudoun News at the age of 22.  The publication of the Public Pamphlet almost 40 years later underscores that affection as well as an abiding interest in those stories of work and service that naturally accrue in any small town.  But not every small town is so fortunate as to have someone in residence possessing the energy and curiosity in the lives of others of, say the Studs Turkel variety, conveniently present as volunteer chronicler. 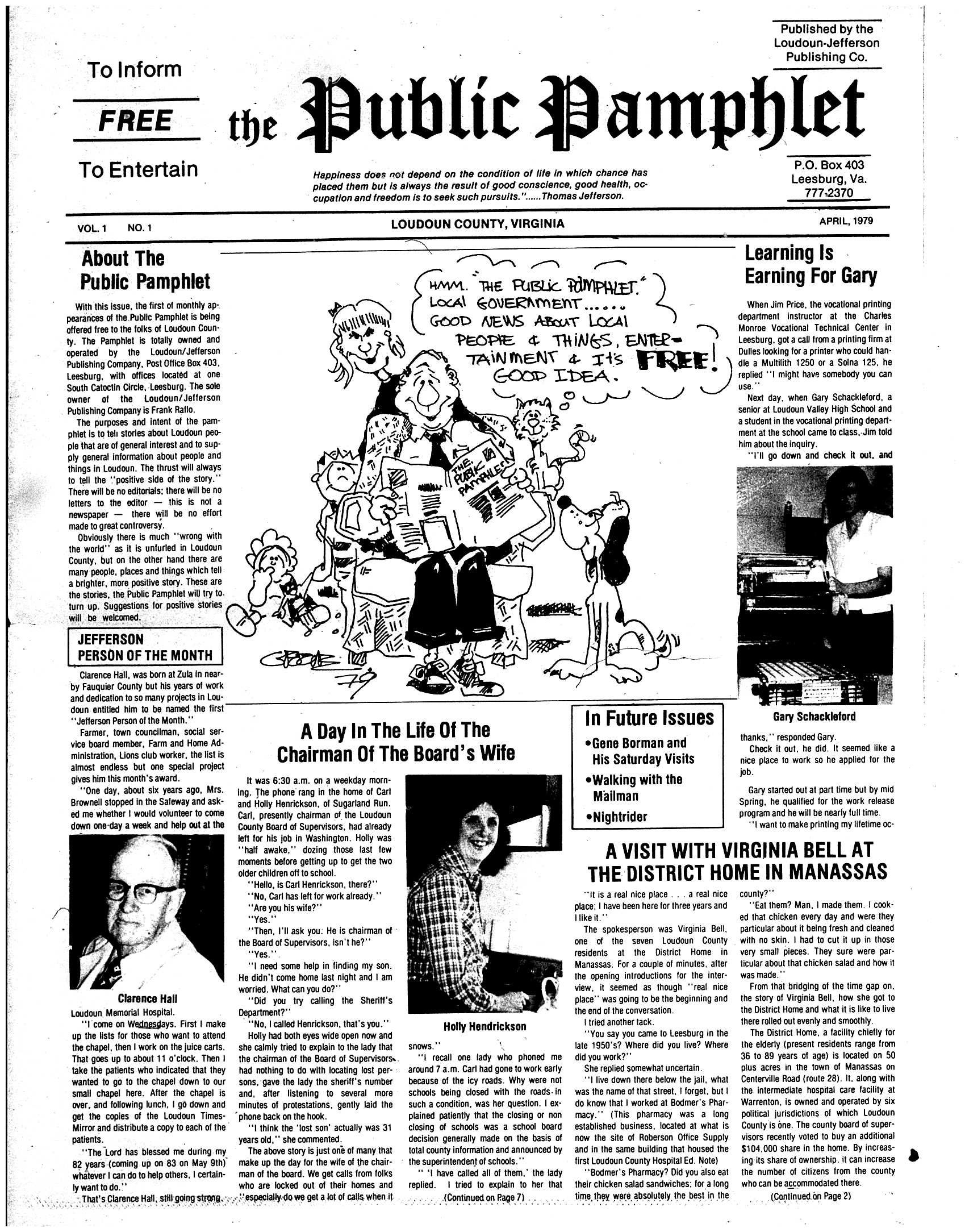 The advertising base, no doubt assisted by years of accumulated business contacts, was strong and the Pamphlet continued on a somewhat sporadic basis until 1992 when finally Raflo’s  ill health curtailed its continuance. The grating cloyingness associated with self proclaimed “good news” publications is happily scarce here.  Social scientists years hence could potentially locate unexpected riches in its pages.  That is, I should say, its microfilmed pages, available for viewing at The Library of Virginia.