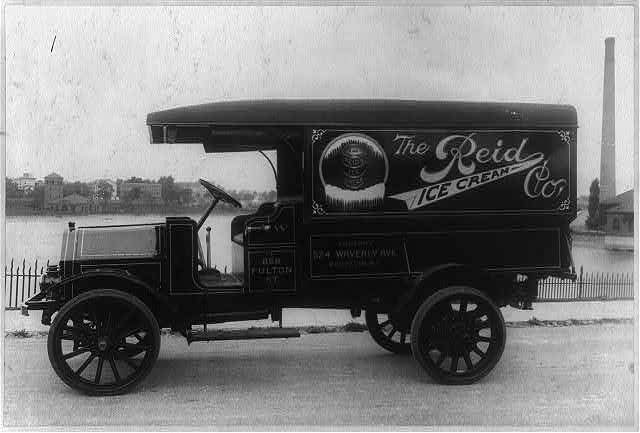 I Scream, You Scream, We All Steal Ice Cream!

On the afternoon of 18 April 1924, an Imperial Ice Cream Company truck got stuck in the mud on the road between Winchester and Front Royal.  The driver left the truck to telephone the company’s Winchester plant for help to get the truck out of the mud.  When the driver returned ten minutes later, he saw that a “gang of convicts, in charge of a guard, had climbed on the truck and stolen from it five quarts of brick ice cream and ten dozen Chocolate Coated Ice Cream bars” worth $6.50.  The guard told the driver that “he couldn’t do anything with the convicts, as they were in for stealing at the time.”  Or so A.W. Warne, Manager of the Virginia Division, claimed in two letters to Major R.M. Youell, Virginia Penitentiary Superintendent.  Outraged, Warne demanded an investigation and financial restitution.  He added that “it seems to me a deplorable state of affairs when a guard in charge of a gang of convicts does not have enough control over the convicts, or himself, to prevent the stealing” of ice cream.  A subsequent investigation by Penitentiary officials tells a completely different story. 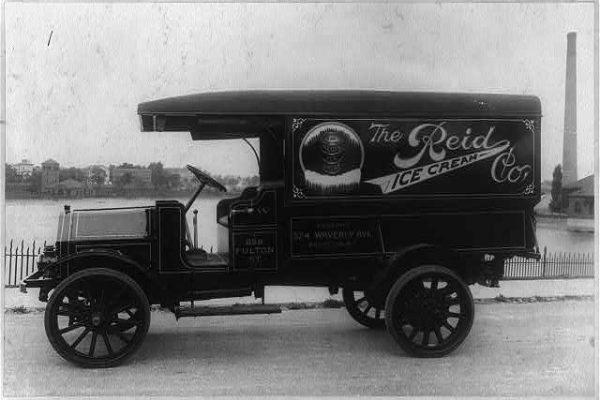 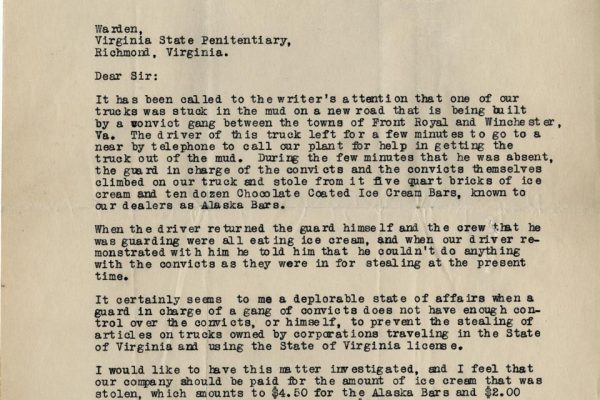 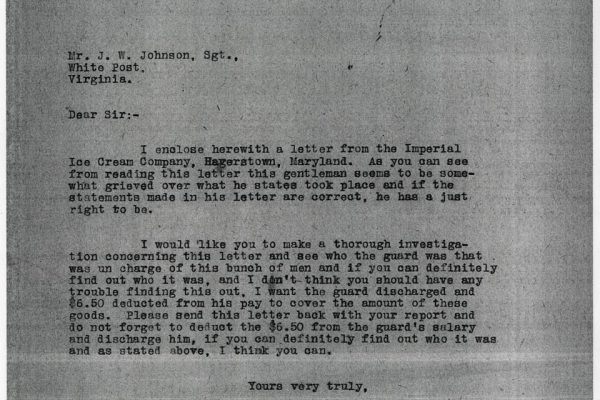 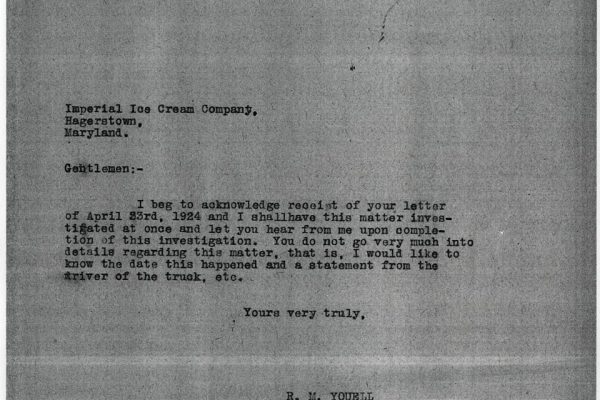 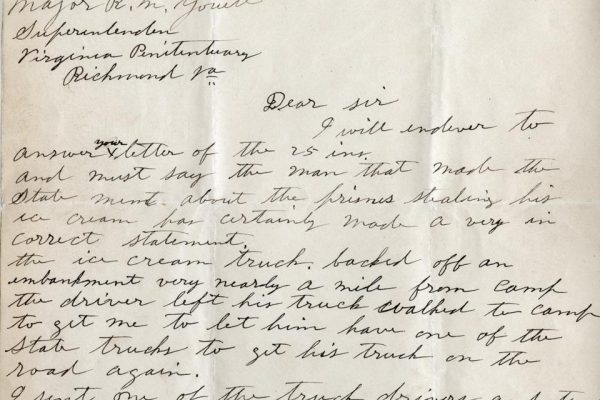 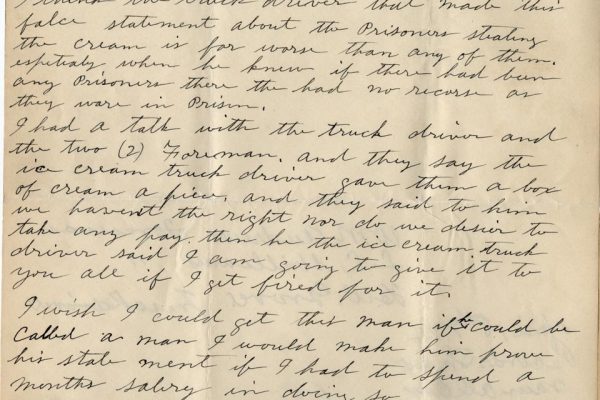 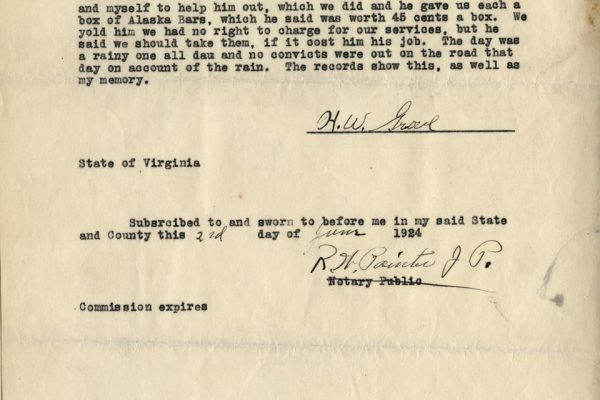 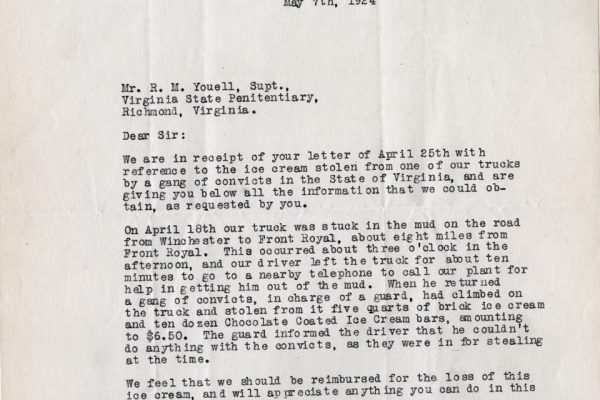 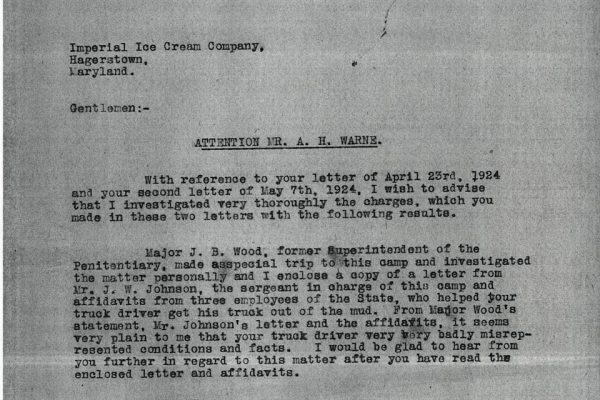 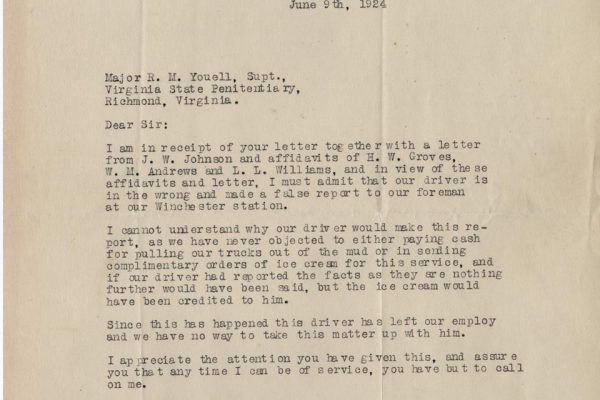 A week after the alleged incident, Superintendent Youell ordered J.W. Johnson, the officer in charge of State Convict Road Force Camp 29, to investigate.  Johnson’s reply on 29 April 1924 reported that the driver “has certainly made a very incorrect statement.”  The ice cream truck, Johnson wrote, “backed off an embankment very nearly a mile from camp” and the driver “left his truck, walked to camp to get me to let him have one of the state trucks” to pull his back on the road.  Johnson sent a truck driver and two foremen to assist.  No prisoners were involved and the ice cream truck driver gave the guards three boxes of ice cream bars.  Johnson could not contain his anger.  “I think the truck driver that made this false statement about the prisoners stealing ice cream,” Johnson wrote, “is far worse than any of them.”  He added that “I wish I could get this man, if he could be called a man, I would make him prove his statement if I had to spend a months [sic]  salary in doing so.” Johnson’s wish went unfulfilled.  By early June 1924, the driver had left the Imperial Ice Cream Company.