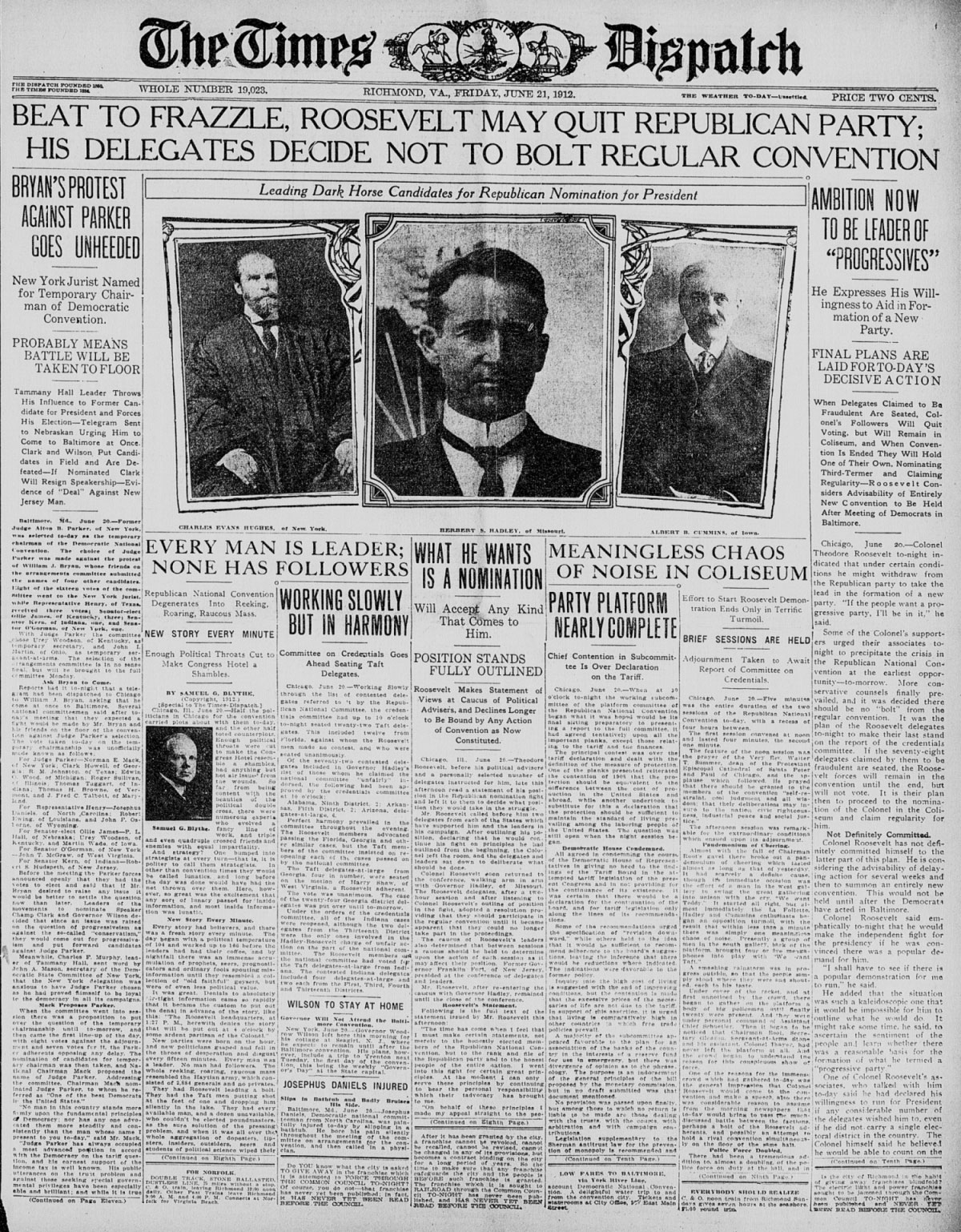 100 Years Ago Today: Chaos at the Republican Convention

The ascension of Mitt Romney, though drawn out, is boring by comparison to the Republican Convention of 1912. The June 21, 1912 issue of the The Times Dispatch devoted nearly the entire front page to the activities of the major parties in preparing for the November election. The headline declares “Beat to Frazzle, Roosevelt May Quit Republican Party.” The previous evening in Chicago, former President Theodore Roosevelt spoke to the convention saying, “If the people want a progressive party, I’ll be in it,” and “I shall have to see if there is a popular demonstration for me to run.” There were challenges to the credentials of delegates for Taft and Roosevelt, each seeking to advance their own candidate’s interests.

Two articles describe the chaos of the day’s events at the Republican Convention. One article describes that the official business at the meeting for the previous day lasting 5 minutes.

The first session convened at noon and last four minutes, the second one minute. The feature of the noon session was the prayer of the Very Rev. Walter T. Summer, dean of the Protestant Episcopal Cathedral of Saints Peter and Paul of Chicago, and the applause which followed. He prayed that there should be granted to the members of the convention “self-restraint, cool judgment, and all wisdom; that their deliberations may insure to the nation civic righteousness, industrial peace and social justice.

The afternoon session was remarkable for the extraordinary conditions which ensued upon its adjournment… Almost with the fall of Chairman Root’s gavel there broke out a pandemonium of cheering… It had scarcely a definite cause, though its immediate occasion was the effort of a man in west gallery to swing the great gathering into unison with the cry, “We want Teddy.” Then the supporters of La Follette, Hadley, Cummins, and Taft began chanting for their respective candidates. The article continues, “A smashing rainstorm was in progress outside, so that the people simply stood where they were and shouted, each to his taste.” Soon the stage was flanked by twenty police officers, not wanting to send delegates out into the storm, “So, for more than an hour the police guard surrounded the platform and the convention officers kept their place on the stage, while the great crowd yelled itself tired.

Meanwhile, in Baltimore the Democratic Party had selected former Judge Alton B. Parker as temporary chairman of the Democratic National Convention as Democrats prepared for their Presidential nominating convention to be held the following week. Parker was selected despite objections from William Jennings Bryan.

A series of three text blocks along the bottom of the page, complain about a franchise that was to be considered by the Richmond City Council that day. One article states, “Is the city of Richmond in the habit of giving away franchises blindfold? The electric light and power franchise sought to be jammed through the Common Council TO-NIGHT has never been published and NEVER YET BEEN READ BEFORE THE COUNCIL.” It’s interesting to see the paper take such an activist position, essentially in defense of open government.