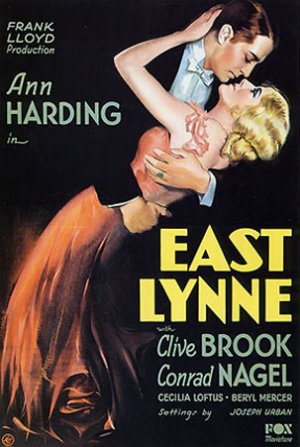 "Dead! And Never Called Me Mother!"

“Jugglery, slight of hand [sic], comic concerts, and songs” brought the congregation of Centenary Methodist Church and members of the Sons of Temperance, Pendleton Division No. 22, to the Lynchburg courts in 1881. In Peleg Seabury, etc. vs. E. A. Emerson, etc., 1881-030, the plaintiffs and defendants argued over the proper use of Halcombe Hall. Congregation members complained that the hall was rented out and “filled up for a public exhibition house, for theatricals, and concerts,” but the Sons of Temperance deny any intention of allowing it to be used for a “demoralizing tendency.”

Movie poster for the 1931 film adaptation of East Lynne

The church purchased Halcombe Hall to promote the “cause of temperance” and objected to its use for such entertainments – especially the play, East Lynne, performed there by the Fay Templeton Star Alliance. The Sons of Temperance countered that East Lynne had “frequently been performed in said hall before the intelligent people of this city who have never pronounced it demoralizing” and that the “performance is of an elevating and refining tendency, and will not injure the morals of any, not even of those whose morals are unhealthy and have a natural demoralizing tendency.”

So what was this play that caused such concern in Lynchburg? Was it so very demoralizing? The play, based on a popular English sensation novel of 1861 written by Ellen Wood, saw many a melodramatic adaptation, starting with its first stage production in Brooklyn in 1863.

The play became so popular that when a stock company needed revenue, East Lynne was the play of choice. The play’s elaborate and often implausible plot centers on infidelity and double identities. Lady Isabel Vane, the eighteen-year-old daughter of the impoverished Earl Mount Severn, marries stodgy, middle-aged lawyer Archibald Carlyle. Lady Isabel quickly becomes bored with her new life and elopes with her aristocratic lover, leaving behind her husband and infant children. After he deserts her and she bears their illegitimate child, Lady Isabel is involved in a railway accident and left for dead. Abandoned and tormented with remorse, she returns to her former home, unrecognizable because of a scarred mouth and blue spectacles, to become governess for her former husband and his new wife. There she is forced to watch as her own son dies and declares the play’s signature line (absent from the novel but often used as a gag by stage comics): “Dead! Dead! And never called me mother!” 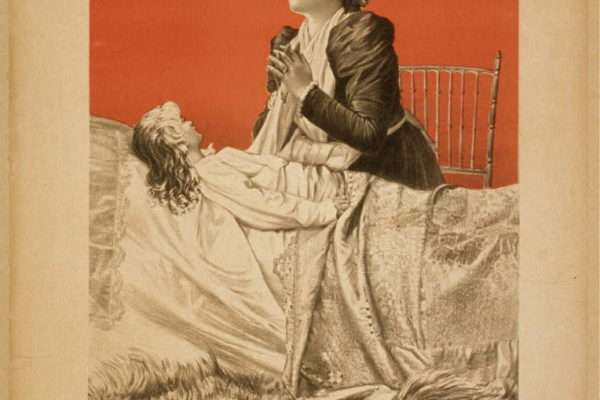 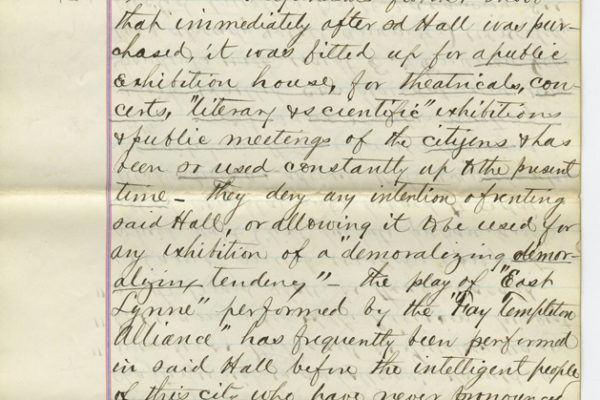 Answer of the Sons of Temperance 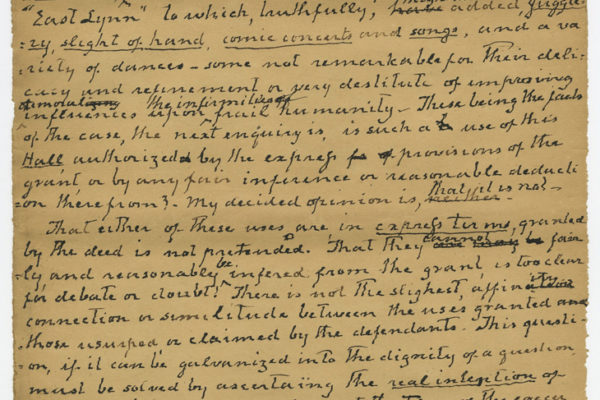 Official opinion of the judge 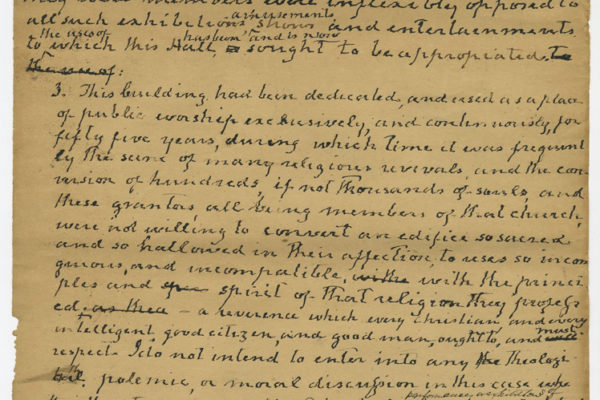 Official opinion of the judge

For some, East Lynne is an examination of Victorian middleclass gender roles and a powerful drama of a woman’s struggles to find her way in society, but for others it’s just an overwrought melodrama with its roots in sensationalist fiction. Either way, East Lynne was immortalized on stage. In 1909, the Pictorial Leader declared that “more millions have witnessed East Lynne than have seen any other play that was ever written.” The tale of the lively heroine seduced away from her husband and children also made its way to the silver screen, with several silent movie adaptations, including one starring Theda Bara in 1916. The most famous film version arrived in 1931, starring Ann Harding and Clive Brook and directed by Frank Lloyd (who would go on to direct 1935’s Mutiny on the Bounty). Nominated for best picture, East Lynne lost out to the Western Cimarron.

East Lynne ends with Lady Isabel falling ill after the death of her son and she soon dies in the arms of her former husband. Most stage versions saw Carlyle forgive his wife as she was dying but a few had Carlyle spurning her until the end. The 1931 film offers a different ending and has Isabel struck with sudden blindness, and, instead of staying put as one should, she continues walking until she wanders right off a cliff. Sadly, the same fate seems to have stricken the dramatic adaptations of the novel. The only existing copy of the 1931 film is at the UCLA Film and Television Archive where only an appointment will grant you access. While the novel sees the light of day in women’s studies and literature courses, the plays and films have mostly been forgotten, despite adaptations filmed as recently as 1982 when the BBC aired a made-for-television production. But, if East Lynne managed to make a return today, it’s doubtful that it would create the same moral outrage that it did in Lynchburg in 1881.