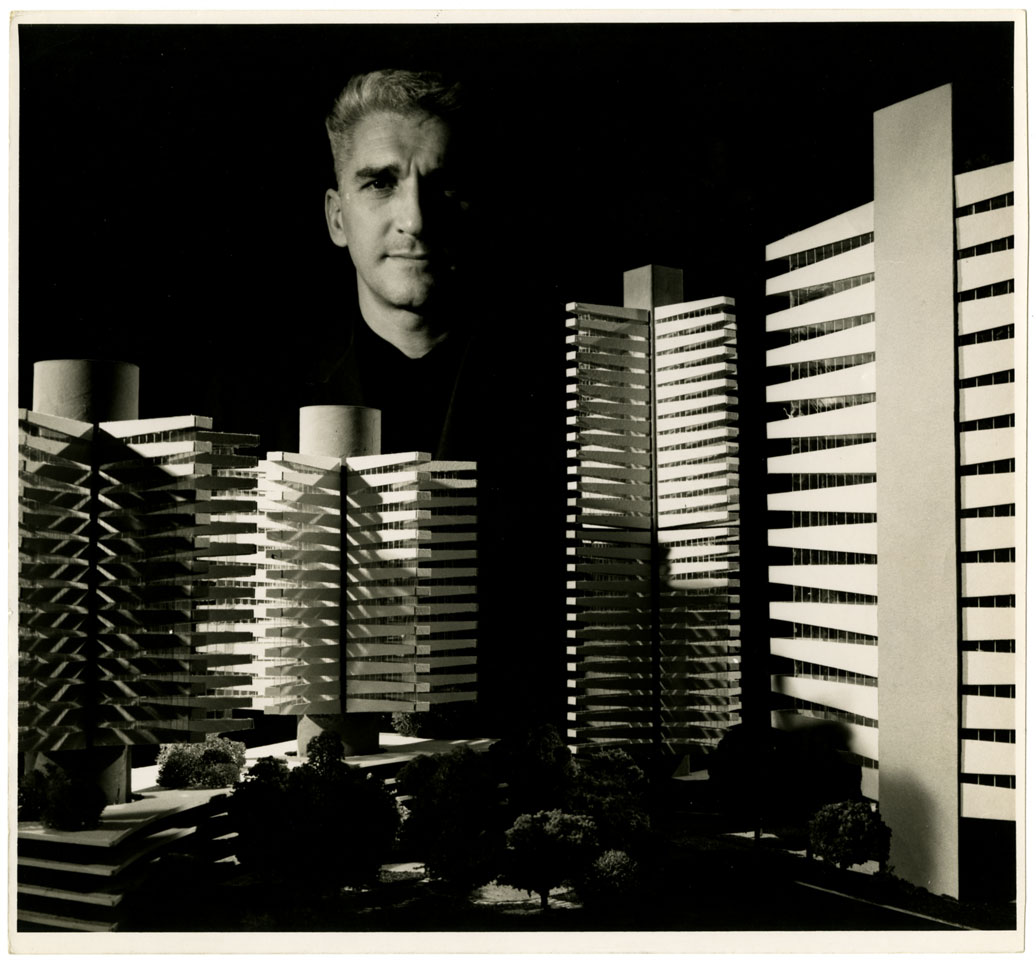 Spinnin’ on top of the world

Ever been on vacation and experienced weather so bad that it traps you in your hotel room? Know that feeling of a desperate urge for a change of scenery? If Richmond architect Haigh Jamgochian (1924- ) had had his way, visitors to one proposed hotel in Virginia Beach would have enjoyed a new view every hour. No, he didn’t plan to organize a huge game of “musical rooms” by having guests periodically change their accommodations. Rather, he planned for the hotel buildings to revolve. The rationale was simple even if the engineering was not. The hotels, like the dock of a departing ocean liner, would themselves become a destination. Tourists would visit the area just to see these wonders, thus benefiting the entire local economy rather than just the specific hotel.

Architect Haigh Jamgochian poses among models of his designs, including the revolving hotel.

The Library of Virginia had the great fortune to receive Mr. Jamgochian’s architectural records in August 2004 (Accession 41492). Included are a number of models designed and built by the architect for various projects in the region. One of the more intriguing is the motorized model for the unbuilt Virginia Beach revolving hotel.

Insanity, you say? Not necessarily. While there was definitely madness to Jamgochian’s method, this project was fully in the realm of the possible. The building’s central core would have housed the mechanical systems and utilized swiveling couplings and flexible connections to maintain service, and parking, shops, and restaurants were located in the buildings’ base. Different from his predecessors, Jamgochian planned to float the building on a thin layer of hydraulic fluid and turn the two 20-story structures via hydraulic pressure. 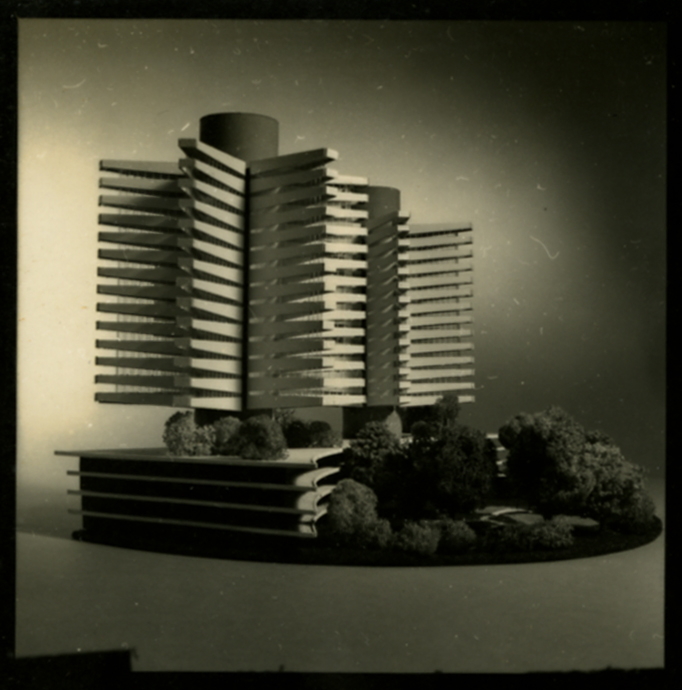 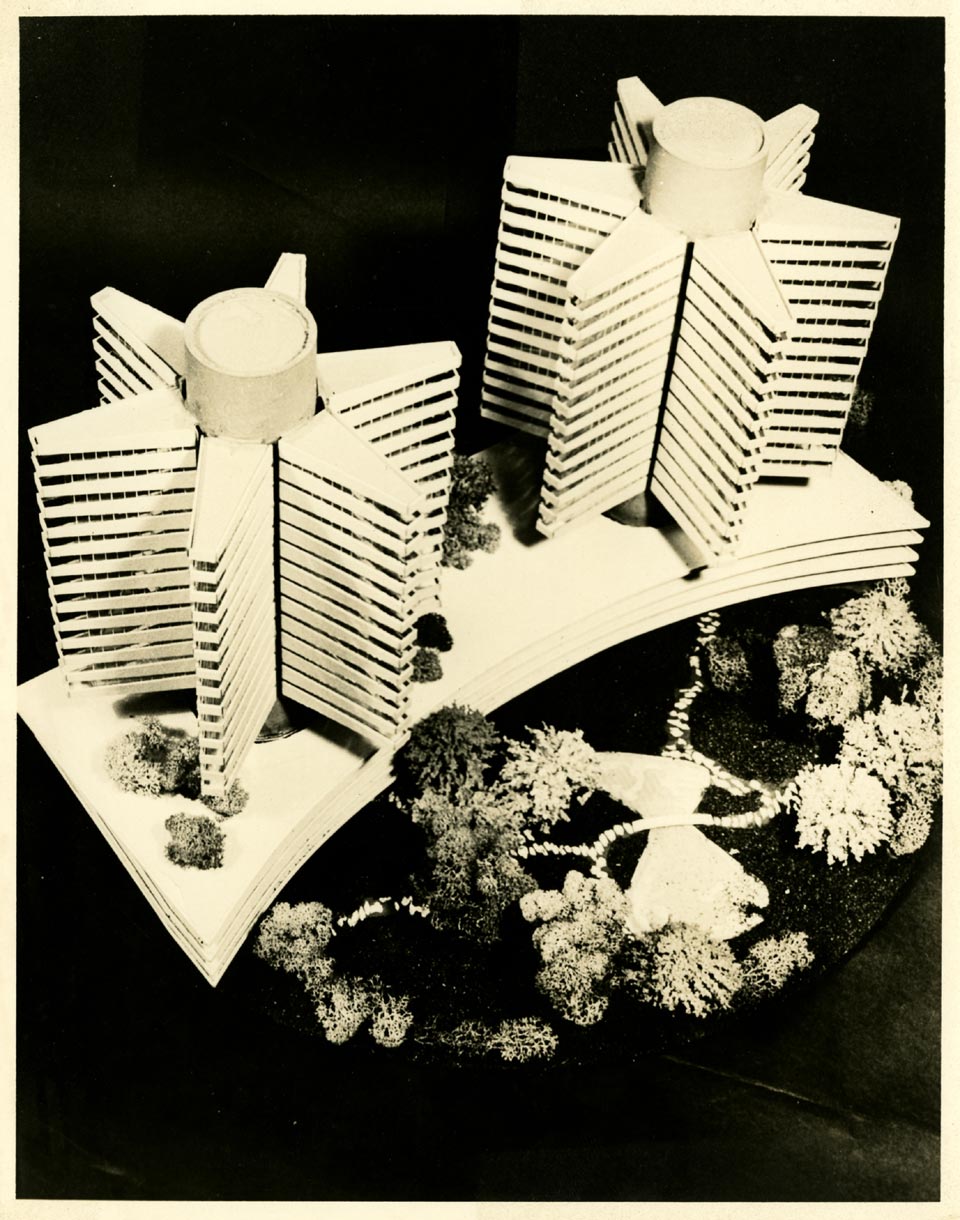 Still not convinced? Well, what if I told you it’s been done, albeit with different methodology. In 2001, a Brazilian firm completed an apartment building called Suite Vollard in Curitiba, Brazil, that mimics Jamgochian’s idea. The floors all rotate independently giving each resident a 360-degree view of the city several times a day.

Jamgochian’s revolving hotel model was featured in a 2008 work by Chad Randl titled Revolving Architecture: A History of Buildings That Rotate, Swivel, and Pivot. Mr. Randl’s 200-page work proves that rotating structures are not a new or an outdated idea. Happily, one example of that bold endeavor is preserved at the Library of Virginia for future consideration and research.