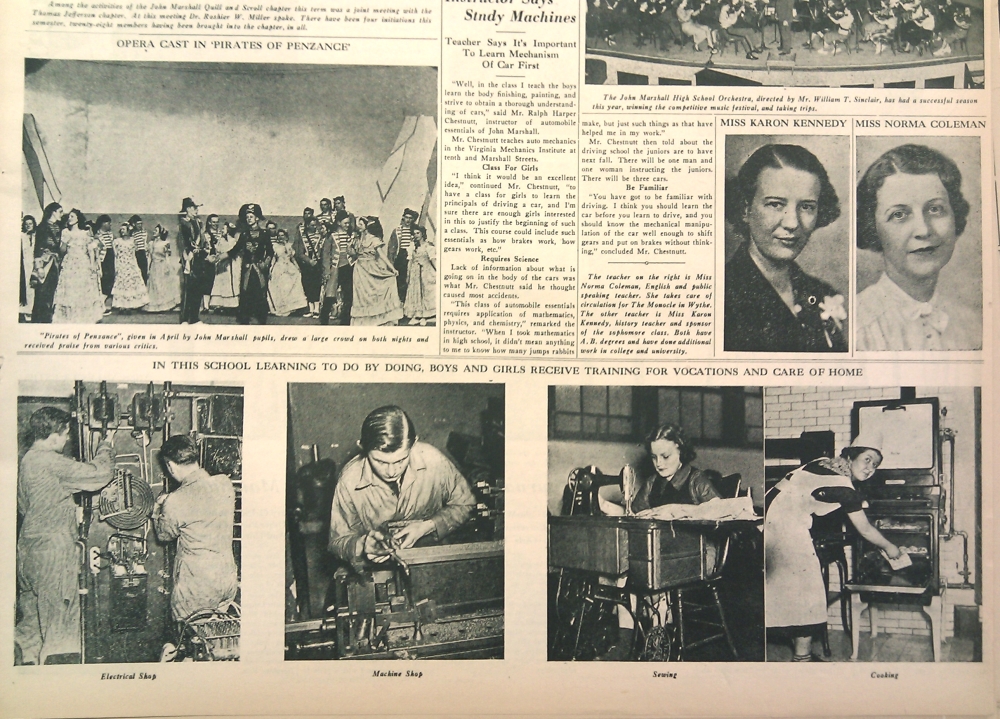 Take a Look through The Monocle.

The Virginia Newspaper Project has cataloged over 7,000 newspapers, most of them local dailies and weeklies that you all grew up reading.

But the Newspaper Project has also gathered up many other species of papers in its statewide search for ink press issues, including political broadsides, “company town” and military papers, and even the occasional high school newspaper. 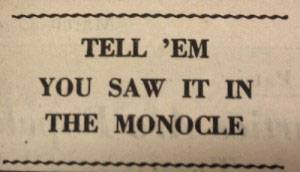 Thanks to a few savvy collectors and the Library’s Newspaper Project operatives who can sniff out a collection of papers the way a good reporter gravitates to a great story, the Library is fortunate to have a significant collection of the early decades of The Monocle, the newspaper for John Marshall High School here in Richmond. 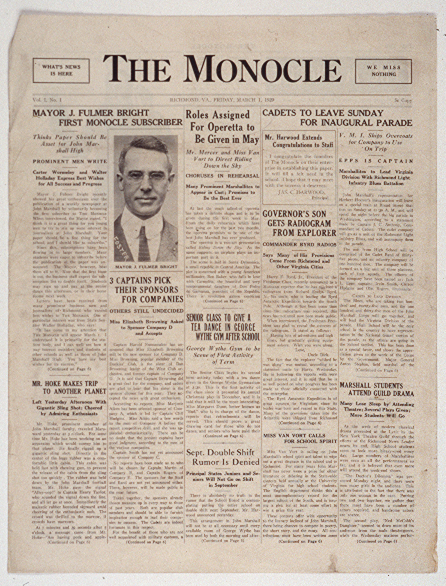 It’s just one of the many gems in the Library’s newspaper collection, and The Monocle is noteworthy, not only for being from a prominent Richmond high school from the mid-twentieth century, but also for its design and content which are at a very high level.

Steve Clark, one of the best columnists ever to grace the pages of the Richmond Times Dispatch, contributed a stirring piece a few years back about the John Marshall High School newspaper and its founder and faculty advisor, Miss Charles Anthony.  (Yes, Miss Charles Anthony. That’s what her father named her.) The paper and Miss Anthony had a synergy that was nearly magical with its impressive broadside format and professional layout, and well, why not read an excerpt from Clark’s article:

Great teachers are ne’er forgotten, which is why Calvin T. Lucy Jr. always will remember Miss Charles Anthony. Miss Anthony as Lucy still calls her, taught English at Richmond’s John Marshall High School from 1926 until 1953, when she retired at age 70.

But Miss Anthony was more than an exceptional English teacher. She also was the founder and guiding light of The Monocle, the school’s newspaper for many years.

During the nearly 25 years that Miss Anthony oversaw The Monocle, the paper was widely recognized as one of the best school newspapers in the nation. It won numerous scholastic journalism awards throughout the 1930’s, 1940’s and early 1950’s.

Many times in those years, The Monocle “scooped” Richmond’s two daily papers. Obviously, the student staff members strived mightly to live up to the paper’s motto: “We Miss Nothing.”

Why was the The Monocle so good?

Later in Clark’s column, Calvin Lucy reveals the secret to the paper’s success: “She ran a tight ship,” said Lucy, who was photographic editor and a feature writer for the The Monocle his senior year. “She was a strict grammarian and a stickler for no opinion in a news story.”

It should be noted that The Monocle’s first student editor under Miss Anthony was Frank McCarthy. Mr. McCarthy would become a newspaper reporter and later a movie producer with Patton as one of his most successful projects. 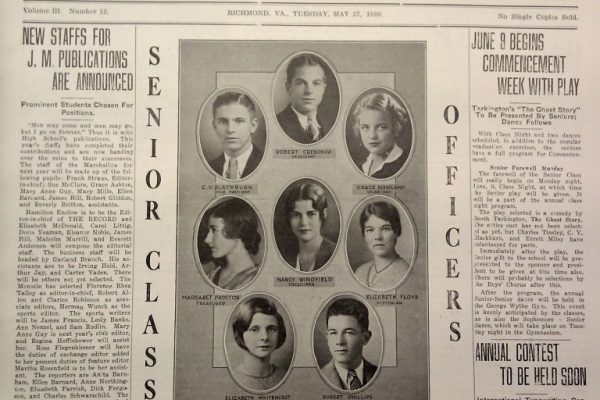 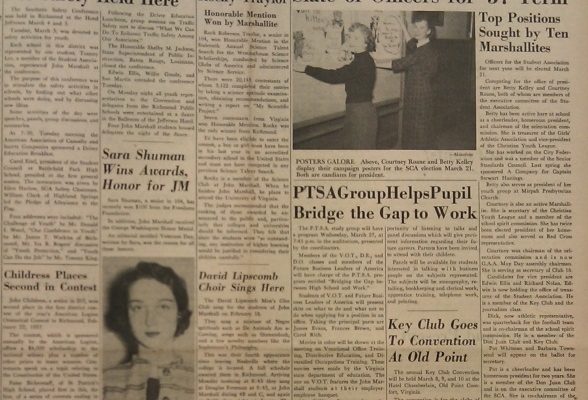 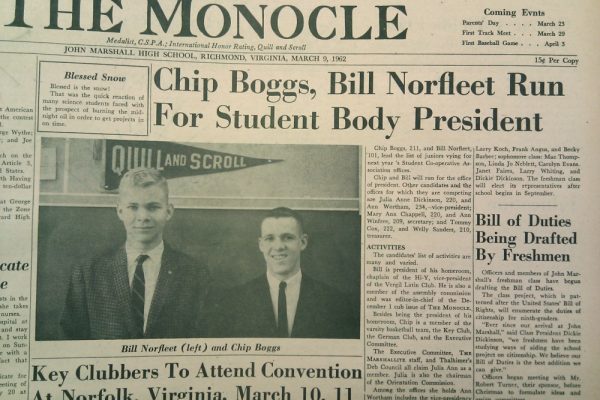 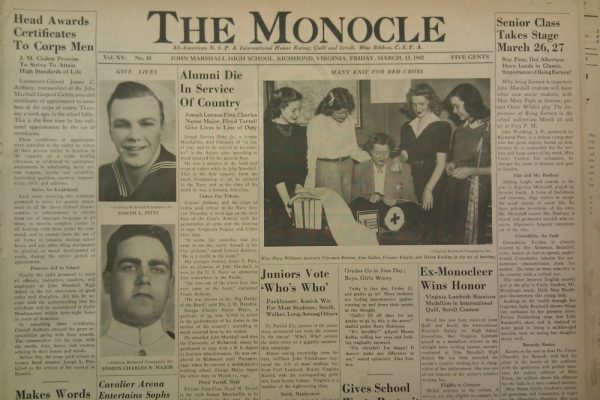 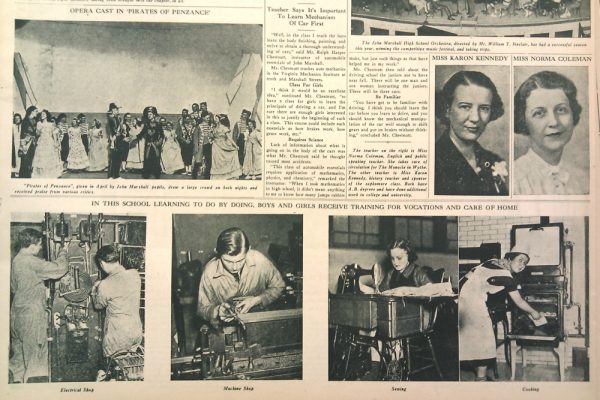 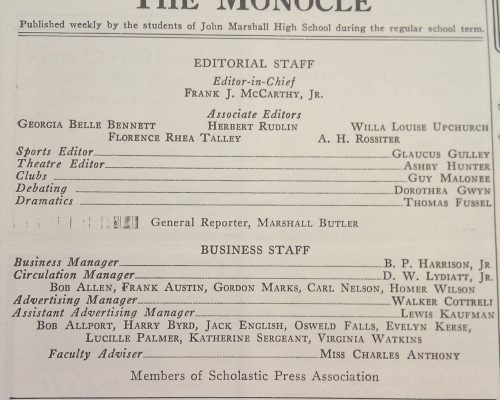