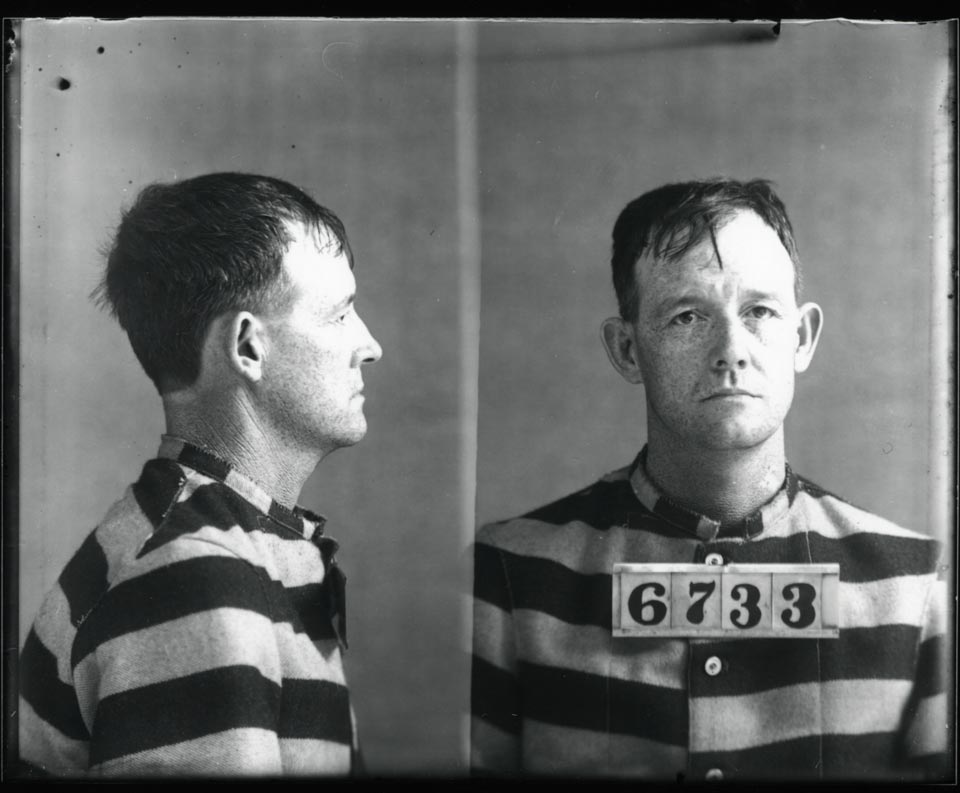 This is the latest entry in a series of posts highlighting early parole records in the Virginia Penitentiary.  Joe Perry, the subject of this week’s post, was paroled in December 1910.  After his release, he exchanged several warm letters with Superintendent J.B. Wood.

Forty-two-year-old Joe Perry of Buchanan County arrived at the Virginia Penitentiary on 30 August 1906 to begin serving a ten-year sentence for second degree murder.  He was a model prisoner and did not violate any rules during his incarceration.  In May 1909, Perry found a repeating shotgun which one of the guards had left in a common area of the penitentiary and returned it to prison officials.  On 14 December 1910, this incident, along with Perry’s good conduct and clemency petitions submitted by Buchanan County citizens, led Governor William Hodges Mann to commute his sentence to eight years.  This made Perry parole eligible.  Five days later the Virginia Penitentiary Board of Directors granted it without requiring Perry to secure employment.

Upon his return home to Council, Virginia, Perry wrote Superintendent J.B. Wood on 14 January 1911 to thank him.  “I feel that I owe you so many thanks for the kind treatment I received from you and your officials during my time there,” wrote Perry.  “I can’t find words sufficient to express them.”  Perry stated that he had a good job with the Clinchfield Coal Company.   “[N]o matter where I may be,” Perry concluded, “you have my best wishes and will also ask that you give all the guards my best wishes.”  Wood replied two days later.  “You conducted yourself while here as a true man ought to,” Wood wrote.  You “gave good service and [were] a respectful and obedient servant to those in authority over you” and upon your discharge received “the good will and best wishes of every man who has anything to do with the management of the prison.”  Wood wished Perry the best and added “that you may be guided by the hand of an All Wise Providence who never deserts those who look to [H]im for help when they need it.” 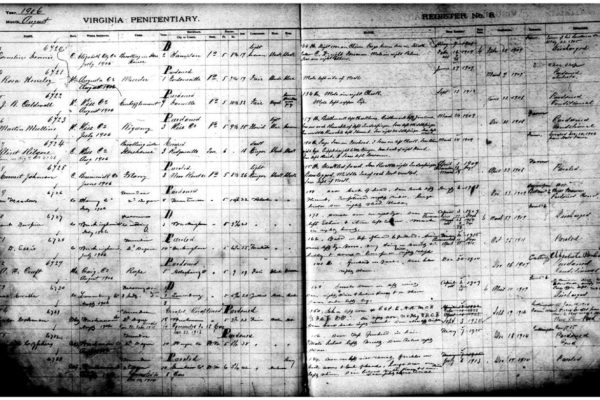 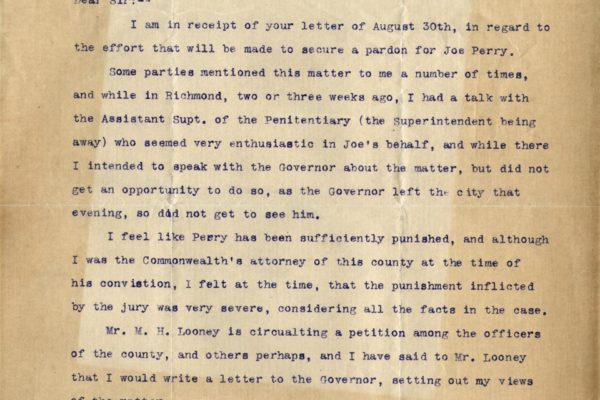 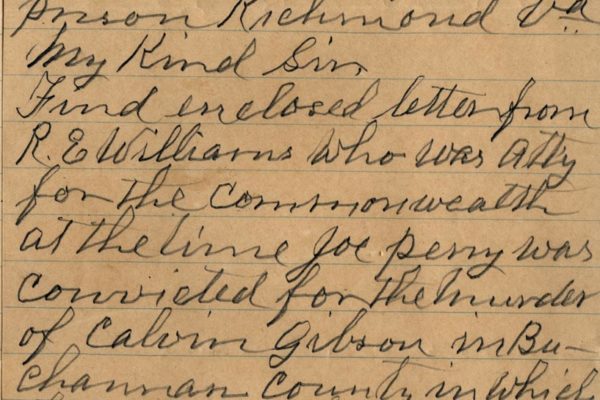 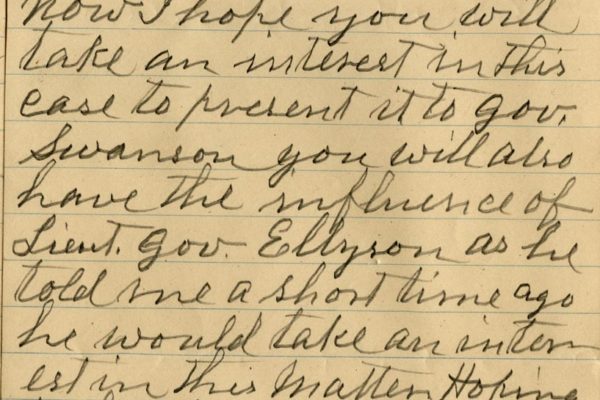 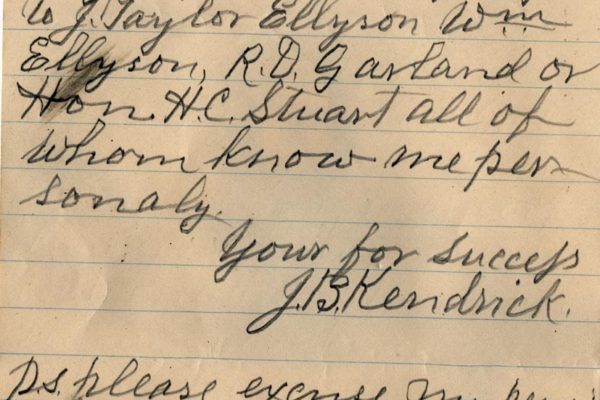 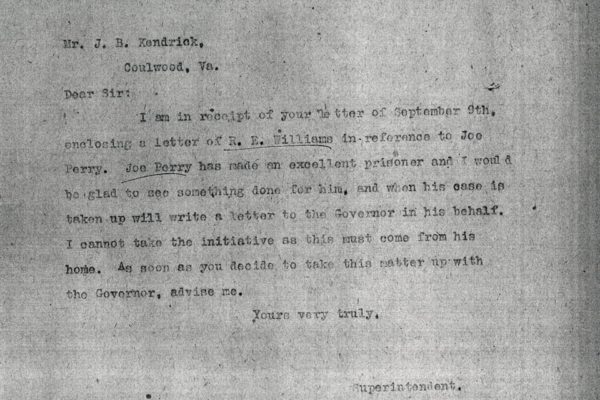 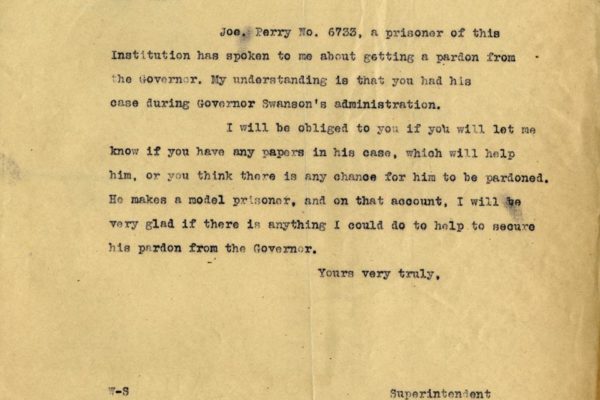 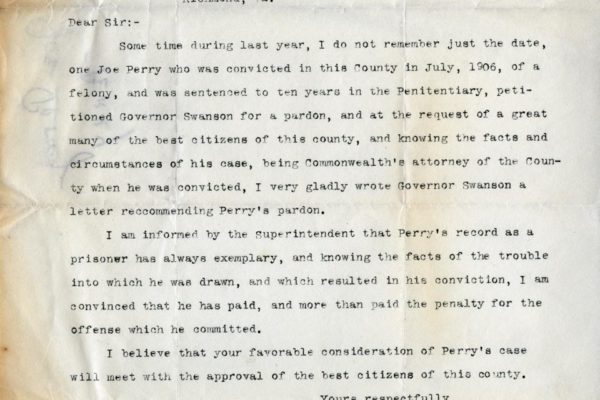 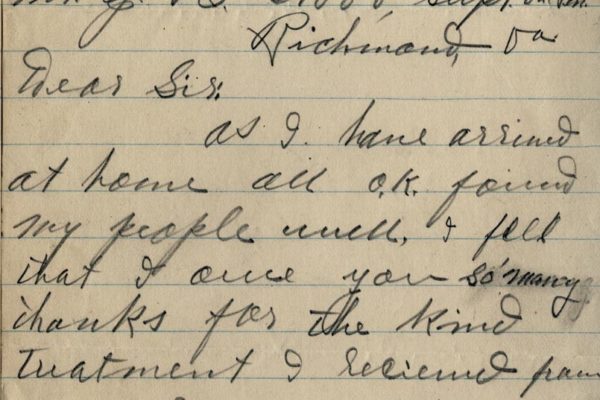 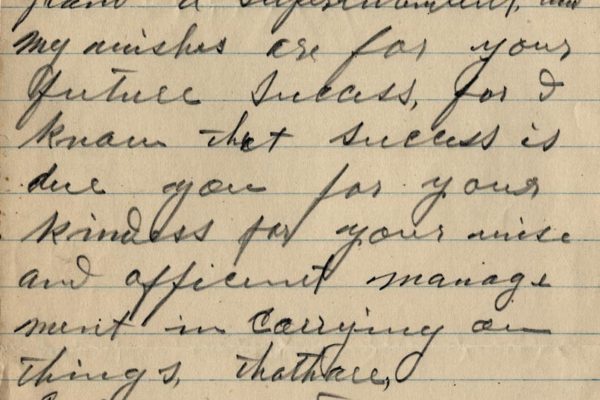 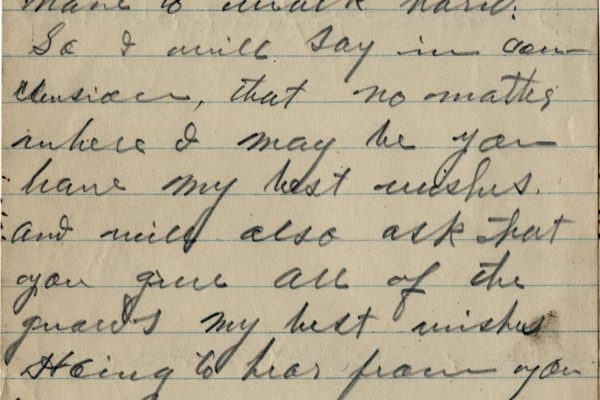 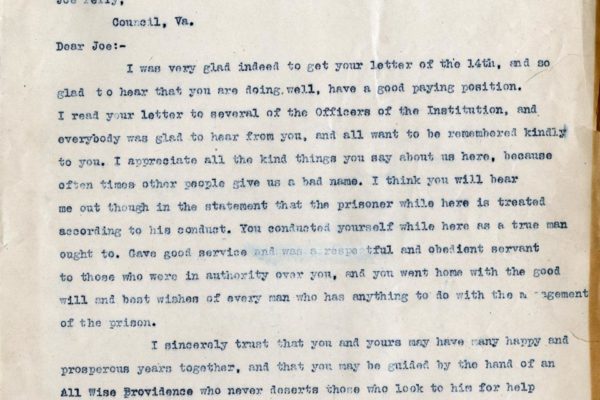 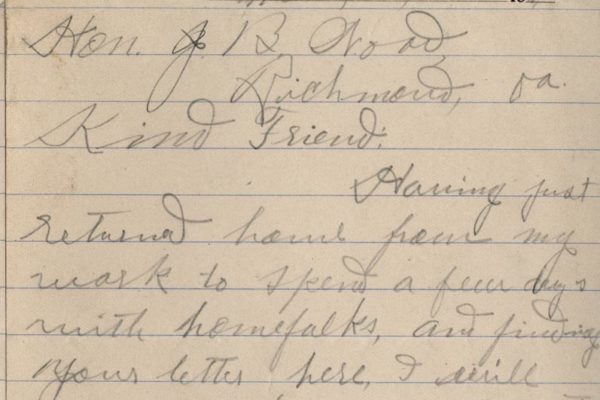 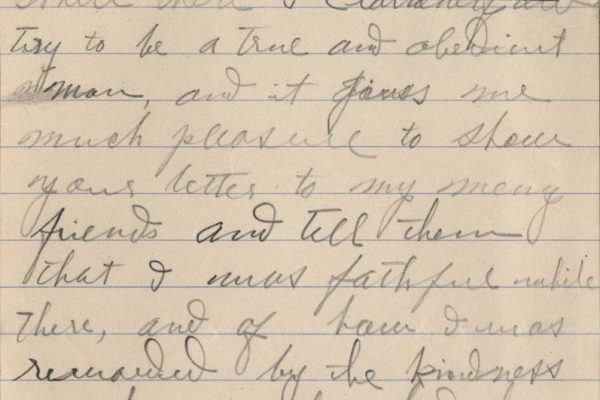 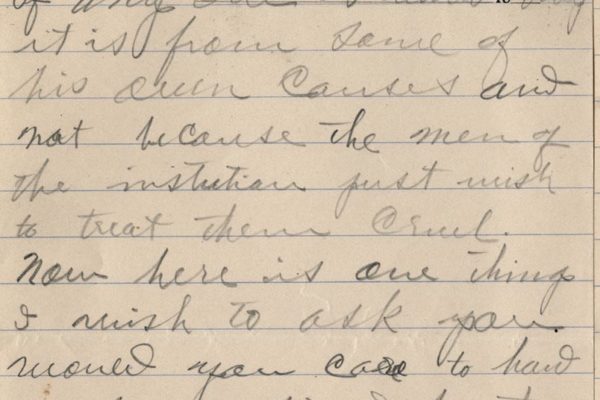 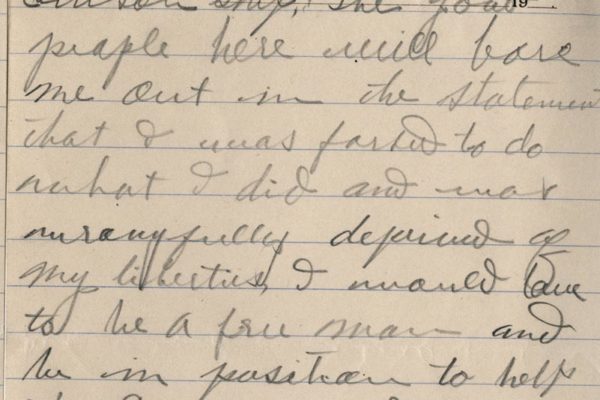 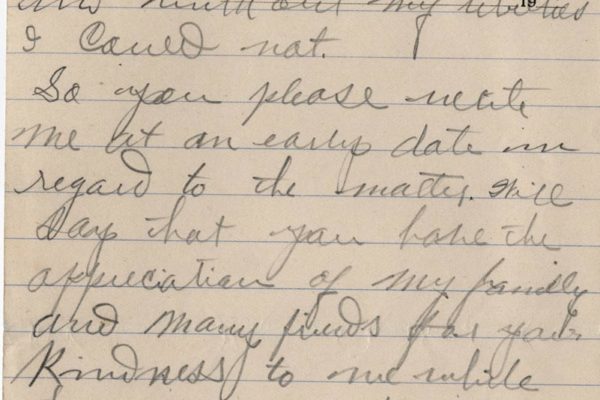 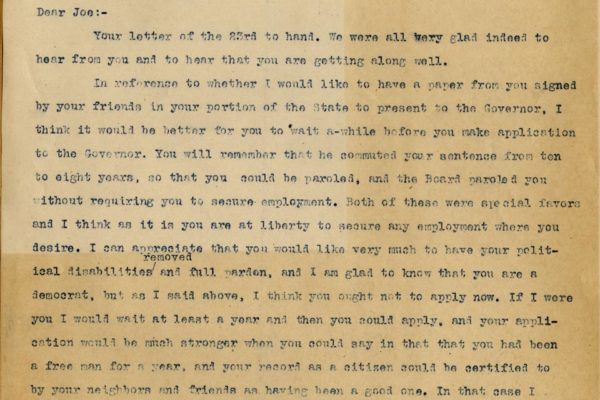 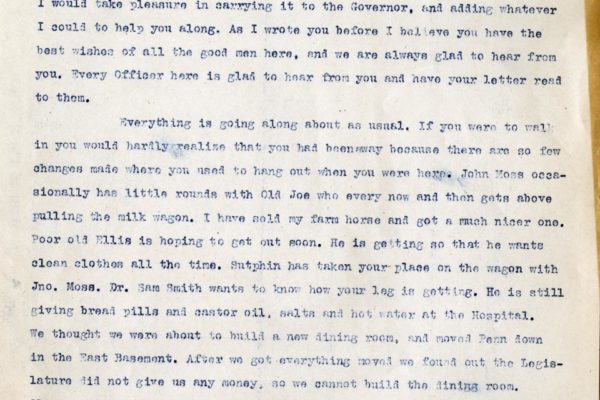 In a 23 March 1911 letter, Perry thanks Wood for his comments on his conduct while at the Penitentiary.  “While there,” he wrote, “I certainly did try to be a true and obedient man, and it gives me much pleasure to show your letters to my many friends.”  Perry added that he “was rewarded by the kindness of those who had the power over me.”  Perry expressed his desire to have his citizenship rights restored.  Perry ended his letter by asking Wood to “give my love to all the officers and best wishes for you.”  In his 31 March 1911 response, Wood updated Perry on the latest news from the Penitentiary, noting how little had changed since Perry’s release.  “Everything is going along as usual,” wrote Wood, with “few changes made where you used to hang out.”  Wood noted “Dr. Sam Smith wants to know how your leg is getting.  He is still giving bread pills and castor oil, salts and hot water at the Hospital.”  In other gossip Wood noted that “Old man Price and [John] Orrel are still well enough to get their regular doses of toddy every day.  Dutch Mullens is still watching the gate, and Hennings is picking grass in the back yard for his chickens.”  Wood also advised Perry to wait at least a year before applying to have his citizen rights restored.  Perry took his advice and his rights were restored on 16 May 1917 by Governor Henry Carter Stuart.