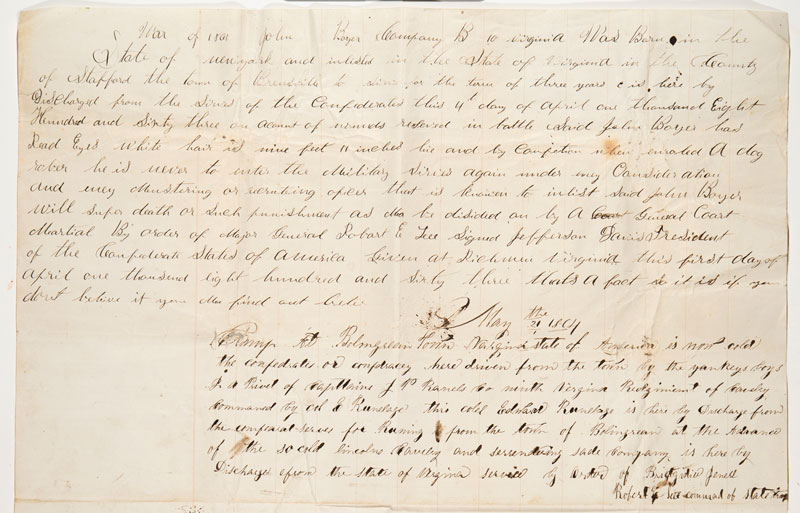 Even during wartime, soldiers managed to have a sense of humor … 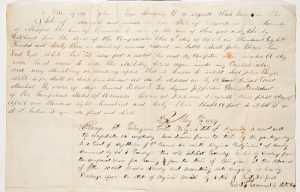 Was Born in the State of New York and inlisted in the State of Virginia in the County of Stafford the town of Brensville to sirve for the term of three years & is here by discharged from the sirves of the Confederates this 4th day of April one thousand eight hundred and sixty three on account of wounds reseved in battle. Said John Boyer has Read eyes white hair is nine feet 11 inches hie and by confetion when enroled a dog rober. He is never to enter the Military Sirves again under eney consideration and eney Mustering or recruting oficer that is knowen to inlist said John Boyer will sufer death or such punishment as ma be disided on by a General Coart Martial By order of Major General Robert E. Lee.

Signed Jefferson Davis President of the Confederate States of America

Given at Richmond Virginia this first day of April one thousand eight hundred and sixty three.

Thats a fact. So it is if you dont believe it you ma find out beter.”

Editor’s Note: This April Fools’ prank is part of the Caroline County Military and Pension Records, 1864. This document has been transcribed as it was originally written. For a more legible transcript with edited spelling, click here  April Fool 1863 edited transcript.