Kicking Up A Stink In Virginia Beach

Here at Out of the Box we’re still celebrating Archives Month 2013, and while getting ready for the Library of Virginia’s 30 October event “Homegrown: Celebrating Virginia’s Cultural Heritage in its Archives and Special Collections,” we’ve had many conversations about local food movements and urban farming.  Some issues that came up included land use and neighborhood development—especially when it comes to animals. Some people just don’t want a rooster or goat living next door. Livestock in the city limits is certainly not a strictly modern issue.

Map of Virginia Beach Owned by the Norfolk and Virginia Beach Railroad and Improvement Company, Portsmouth City Chancery Cause 1911-015, A. Johnson Ackiss for etc. vs. E. H. Morrison.

In fact, we uncovered an early 20th-century Portsmouth City chancery cause in which a horse was causing problems in the summer resort town of Virginia Beach.

The Norfolk and Virginia Beach Railroad and Improvement Company purchased land in Princess Anne County in 1883 to create a “high order summer resort” called Virginia Beach.   The company hoped to attract refined and cultured people to purchase land to build cottages and residences. The original deeds sold by the company included seven covenants that were to be followed for the construction of buildings and use of the property.  One of the covenants forbade the building of public or private stables on the lots.   According to B. P. Holland, a real estate agent, the covenants were made “to have a high order of summer resorts and to do away with nuisances or anything of that kind, or anything that might prove a nuisance to the people, that is, good people of refinement.”  In 1910, one doctor’s horse proved to be such a nuisance. In the Portsmouth City Chancery Cause, A. Johnson Ackiss for etc. vs. E. H. Morrison, 1911-015, the defendant, Dr. Morrison, was accused of violating one of the covenants of his deed by building a stable on his lot.   Ackiss, a judge in the Princess Anne County  Court, sued to have the stable removed, complaining of the disagreeable odor coming from the stable and the noise made by the horse.

In his deposition, Judge Ackiss described the location of the stable in relationship to his house, the months when the horse was the noisiest, and the annoyance caused by flies after the stable was built. Ackiss even claimed that the odor from the stable could be smelled in the dining room of his house. Dr. E. H. Morrison’s witnesses claimed that the stable either did not have an odor or that if it did, it was slight and did not create a problem.  Morrison further argued that his deed gave him the right to erect “suitable stables for the accommodations of the occupants in the residences.” Ultimately the court sided with Dr. Morrison. 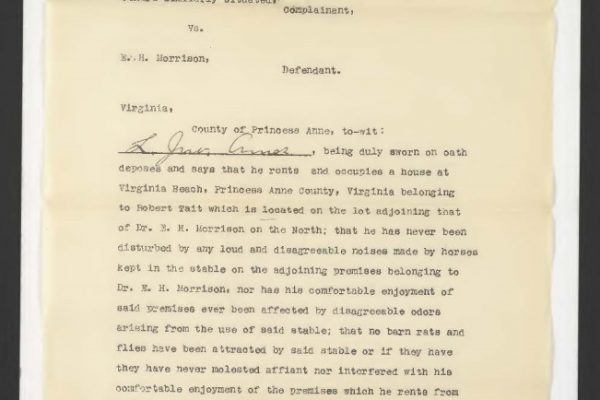 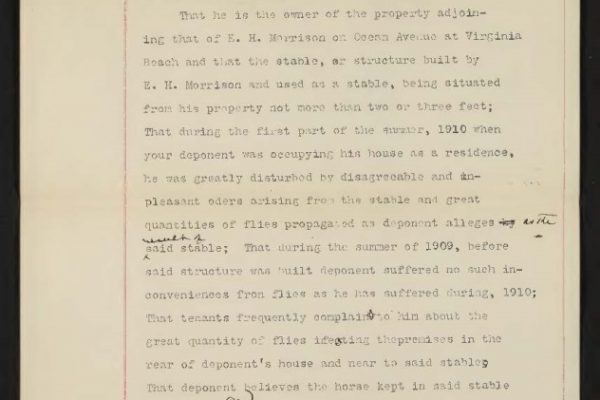 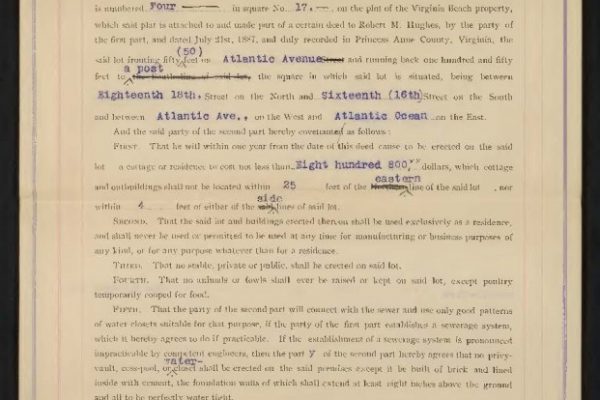 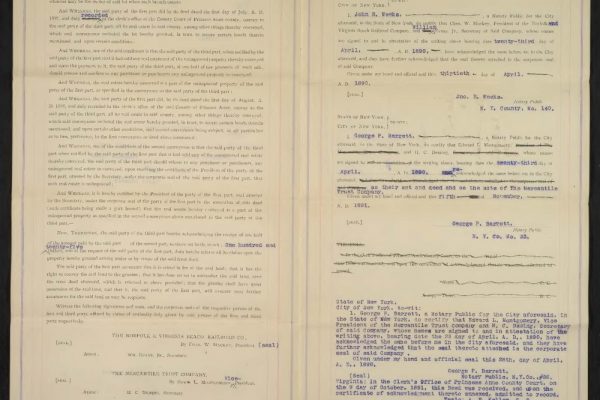 Not only did this case provide a historical view of how livestock was treated in the city limits, it also provided a short history of the development of the summer resort community of Virginia Beach from the sale of the first deeds in 1887 through 1910. Also included in the case is a “Map of Virginia Beach owned by the Norfolk and Virginia Beach Railroad and Improvement Company” showing the layout of the planned community—streets, lots, and railroad tracks.  The map shows the location of the U. S. Life Saving Station No. 2, the Virginia Beach Pavilion, parks, lakes, a race course, and the outlines of three unidentified buildings in Square No. 17.  The lots sold by the Norfolk and Virginia Beach Railroad Company that were under discussion in the chancery cause are identified on the map with a dot, the letter “x”, or a number.