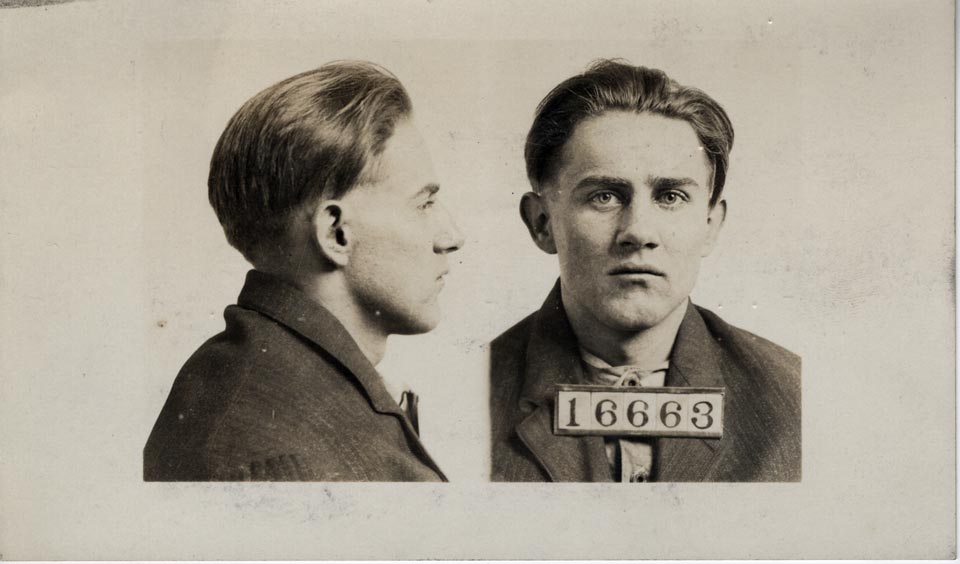 This is the latest entry in a series of posts highlighting inmate photographs in the records of the Virginia Penitentiary.  Charles Beckner, the subject of this week’s post, began his life of crime at the age of 14.  By the time Beckner died in 1943, he had escaped three times from Virginia correctional facilities.

Charles Edwin Beckner, the ninth child of Winfield and Augusta Beckner, was born on 26 July 1898 in Tennessee.  After Winfield’s death in 1902, the family moved to Richmond, Virginia.  Charles probably was exposed to crime through his older brother Chester.

Chester, alias The Tennessee Kid, was arrested numerous times between 1906 and 1916 for highway robbery, stealing, and fighting.  He served several short sentences in jail but was never sentenced to the Penitentiary.  Charles wouldn’t be so lucky.

Beckner’s first brush with the law came in March 1913 when he was arrested for theft.  Beckner and three other boys were part of a gang of thieves who fenced their ill-gotten loot through Richmond fortune teller “Professor” Wilbur R. Lonzo.  The Richmond City Juvenile Court sentenced the boys to the Laurel Reformatory in Henrico County for an unspecified amount of time.  In September 1918 Beckner completed his World War I draft card in the Portsmouth City jail.  He was arrested on 9 May 1920 for committing ten robberies in Portsmouth and again sentenced to jail.  He was paroled a few months later.  In September 1920, Beckner was arrested and, according to the Richmond Times-Dispatch, confessed to “more than a score of robberies in Richmond and Henrico County” which netted him thousands of dollars of jewelry.  Beckner pled guilty to four counts of burglary and was sentenced by the Richmond Hustings Court to 12 years in the Penitentiary. 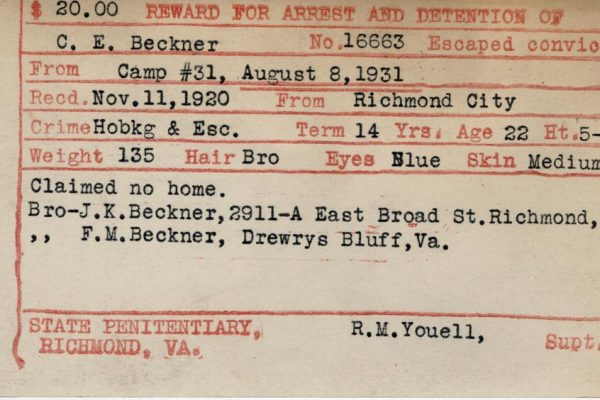 Back of Escaped Inmate Card 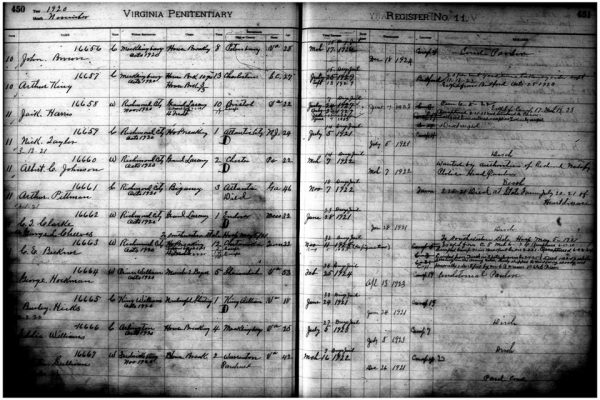 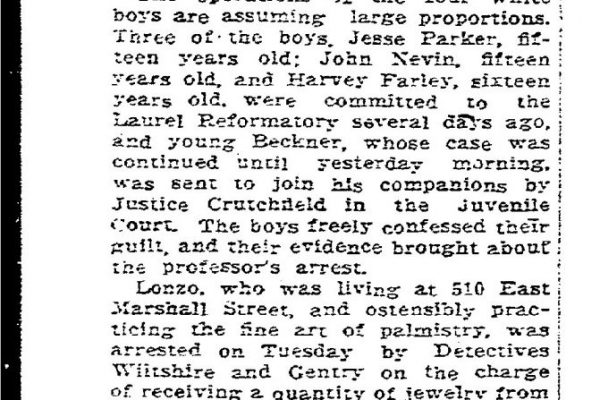 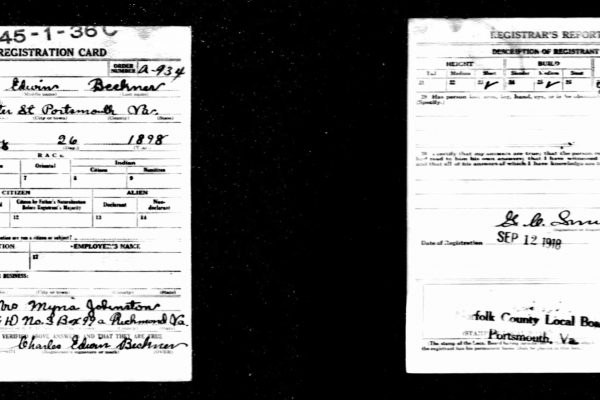 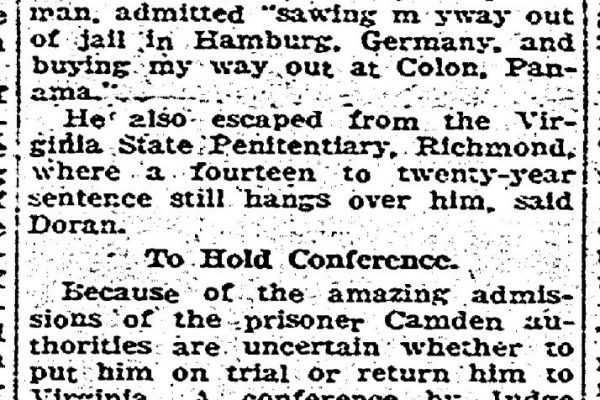 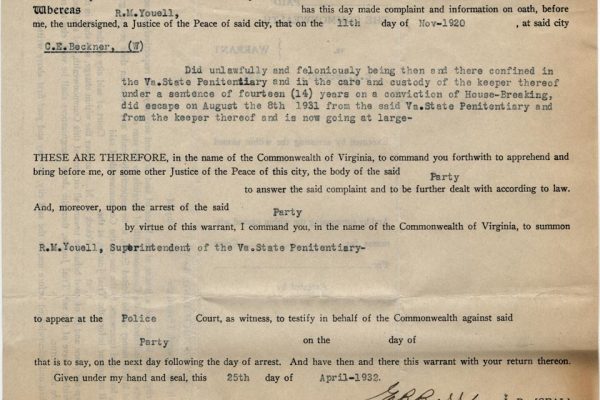 Records of the Virginia Penitentiary 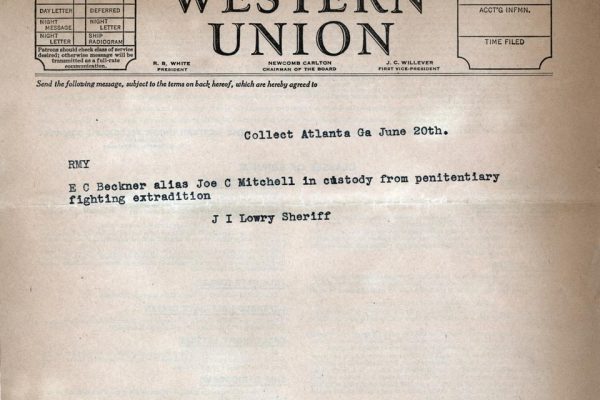 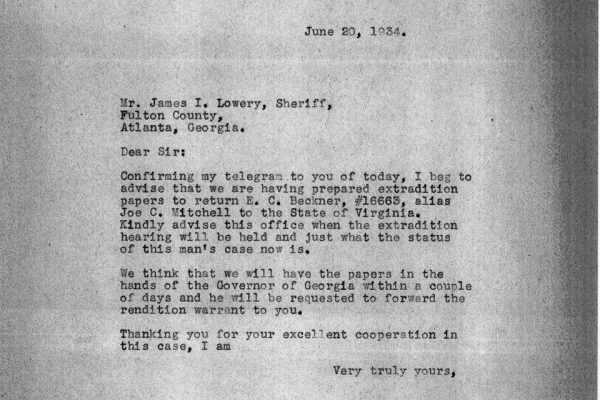 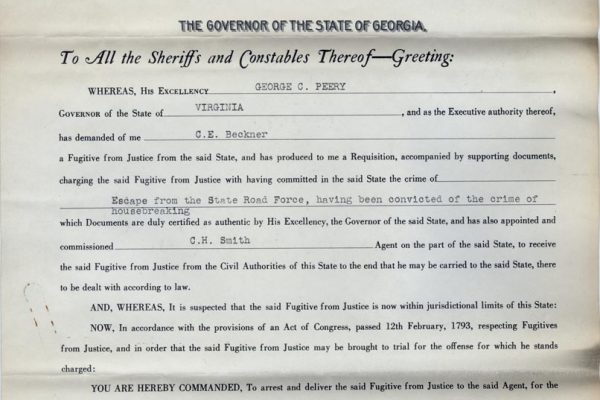 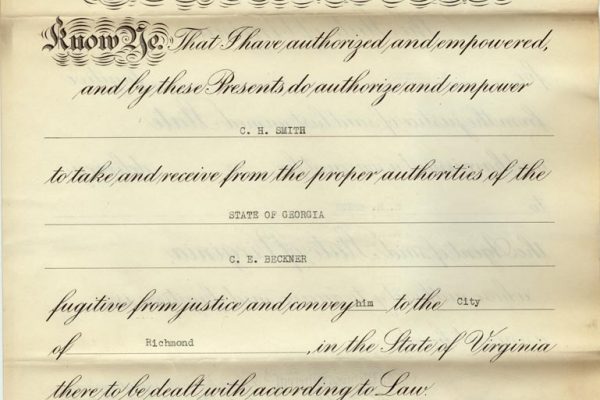 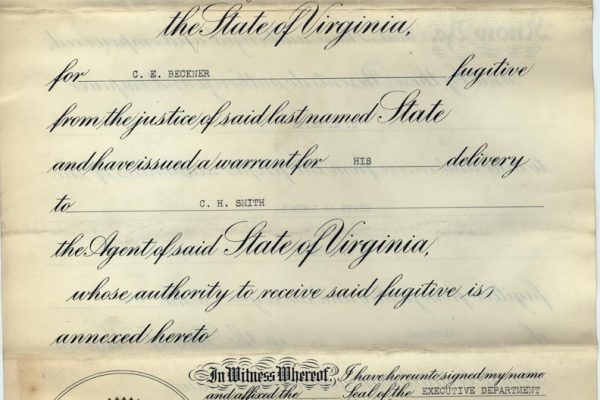 Rendition Order for Becklner (back) 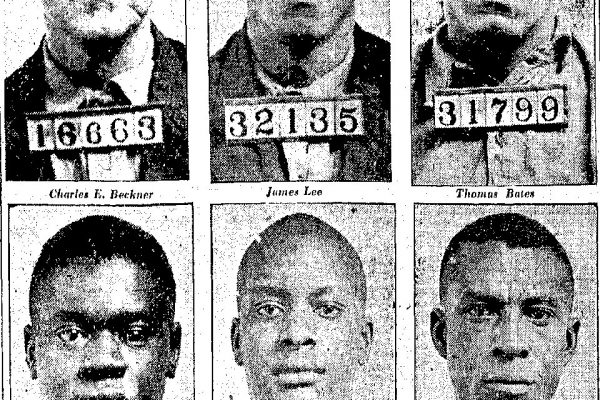 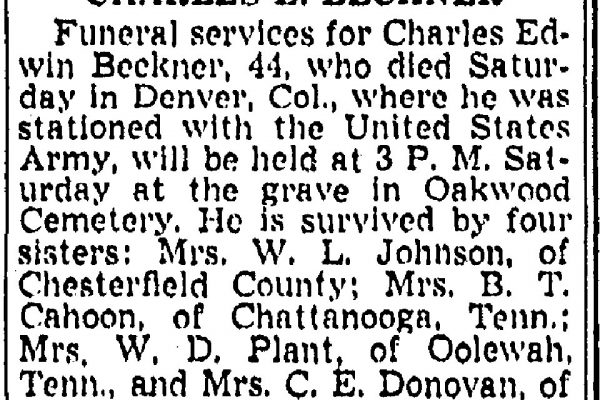 Beckner was assigned to State Convict Road Camp 5 in New Kent County.  On 6 March 1924, Beckner escaped.  When arrested for burglary in Camden, New Jersey on 12 November 1924, Beckner admitted, according to the Richmond Times-Dispatch, to “sawing my way out of jail in Hamburg, Germany, and buying my way out of Colon, Panama.” Beckner served a prison sentence in New Jersey then was extradited back to Virginia in June 1928.  While there is no proof of Beckner’s international escape claims, he did escape two more times from Virginia correctional institutions.  On 8 August 1931, Beckner escaped from State Convict Road Camp No. 31 in New Kent County.  He was recaptured in Georgia in 1934.

Beckner’s final escape on 9 March 1935 was filled with irony.  State Convict Road Force guards were transporting Beckner and 13 other inmates back to Spotsylvania from Richmond where the Richmond Hustings Court tacked additional years on to their sentences for previous escapes.  On their way back to their camp, six inmates, including Beckner, cut through their leg irons, threw a blanket over the unarmed guard and jumped from the truck near Wilderness.  Three inmates were quickly recaptured.  Beckner was not one of them.  In fact his story ends rather mysteriously.  A note in Beckner’s prison register entry states that he “died 23 January 1943 while serving in the Army Force [sic]; Body shipped to Mr. Henry Woody and personally identified by Mr. C.A. Mann, Va. State Prison.”  Why did a prison official need to identify the body?  Had Beckner enlisted in the military under an assumed name?  We may never know.  Beckner is buried in Oakwood Cemetery in Richmond.