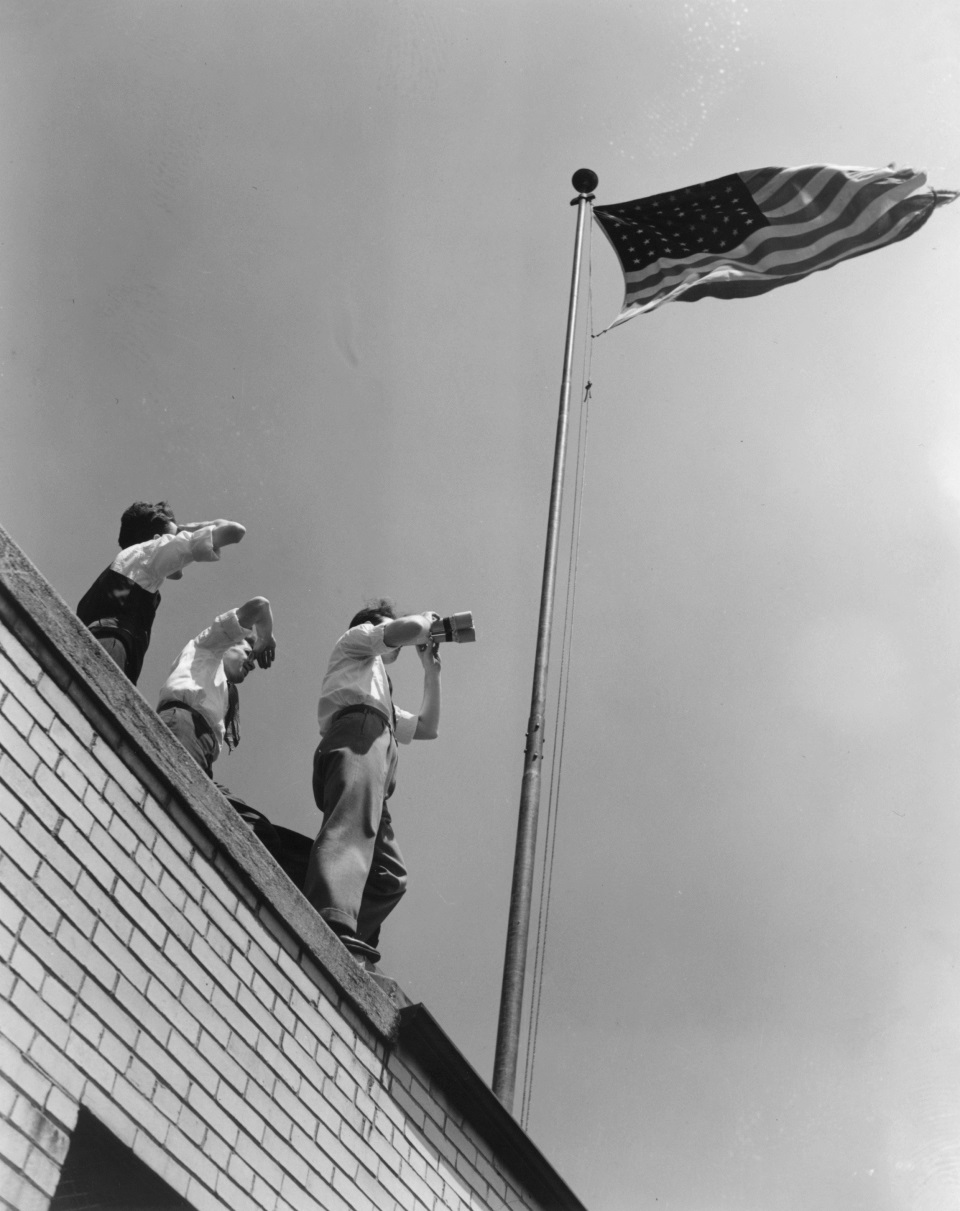 Seventy years ago in Greene County, Virginia, civilian volunteers began to look toward the skies and record their observations in a log book, a simple black and white composition book.   Somehow this log book ended up at the Greene County Courthouse and found its way into the Library of Virginia collections. Greene County residents, mostly women, sat for hours at a time watching the skies and recording the number of planes that passed overhead. Just how common was this practice during World War II?

Similar individuals, in observation posts up and down the East and West Coasts of the United States, used these logs while acting as airplane spotters.   As a defense against a potential German or Japanese air attack in World War II, the United States War Department established the Aircraft Warning Service (AWS) in May 1941.  The AWS combined volunteer observation posts and secret volunteer information and filter centers (largely staffed by women from the Aircraft Warning Corps) and was the civilian service of the Ground Observer Corps, a civil defense program of the United States Army Air Forces. 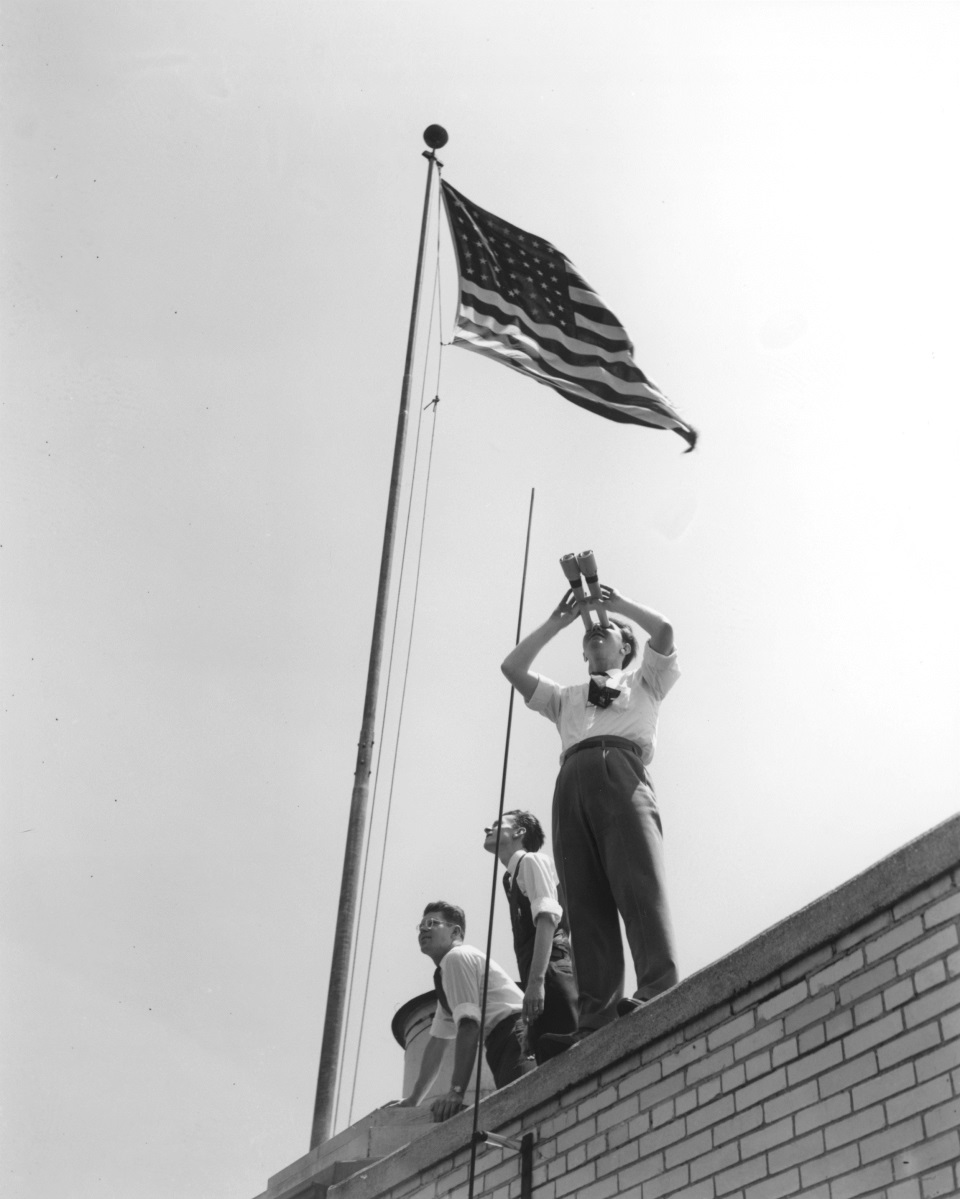 Looking to the skies in Richmond, Virginia, circa April 1941.

Along the East Coast from Maine to Florida and inland 400 miles, American Legion Posts set up observation posts six miles apart, in proximity to telephone lines and roads.  However, in most places, observers worked from any site that offered a clear and unobstructed view of the sky—manning search towers and bare rooftops aided only by a pair of binoculars or trained eyes.  Posts were manned on a 24-hour basis if necessary by a chief observer, two assistant chief observers, and a ready number of men, women, and teenagers –many of whom could not join the military but wished to be part of the larger war effort.  Identification cards were provided and arm bands worn on the left arm.  Aircraft recognition training was essential.  The Army Air Forces produced all types of aids, from silhouette posters, flash cards, slides, movies and a scale model made of black, hard rubber.   Recognition clubs, contests and meetings created a larger social phenomenon.

Generally when aircraft were spotted, observers recorded their observations on forms or in log books.  A call was then placed to a regional filter center to deliver a verbal “flash message” which contained the details of the observation.   Each post had its own code and number.  According to the surviving log book, the post in Greene County was known as American Legion Post 128-G and is still active today.  The Code was Olive 44.

The Greene County (Va.) Ground Observer Corps Post 128-G Log Book, as it is known today, dates from February to June 1943. Found in the volume are the names of local observers,  such as Bruce Estes, Lottie Herndon, B.B. Shotwell,  C.C. Jennings Jr., and Mr. and Mrs. Bud Snow to name a few. The dates and time frames for all volunteers, the number of planes identified, and the weather conditions and visibility were all recorded. The Greene County post was primarily staffed by women, with men signing on to work the graveyard shift. On most days no planes were spotted, but on a few occurrences, up to as many as six planes were seen flying overhead. According to an account from the nearby town of Scottsville, a number of U.S. Army war planes flew over the area from Byrd Field in Richmond.  These planes simulated attacks on the steel bridge over the James River.  The Horseshoe Bend of the James River in this area was an easily identifiable landmark to these pilots–hence, the number of planes recorded in the Green County log book.   In their spare time, some Greene County observers wrote letters and doodled on the back of the log book. 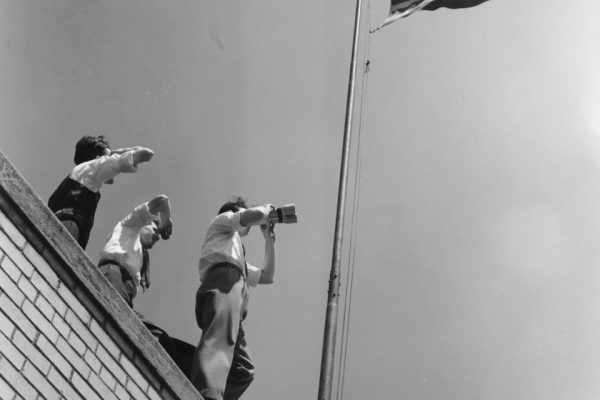 Looking to the skies 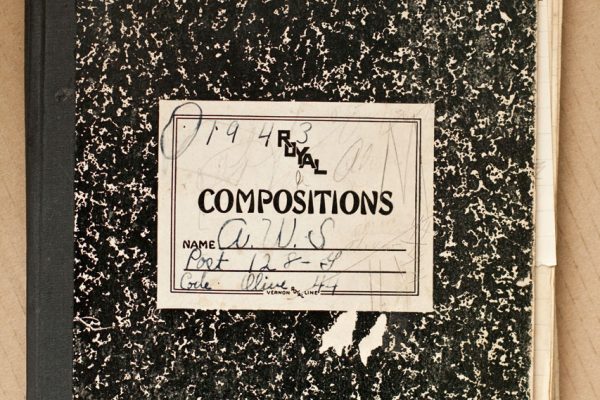 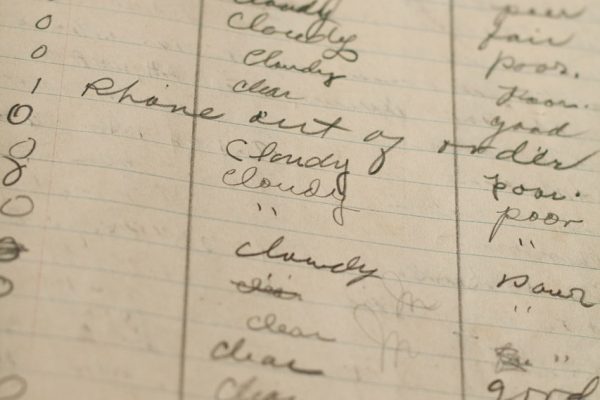 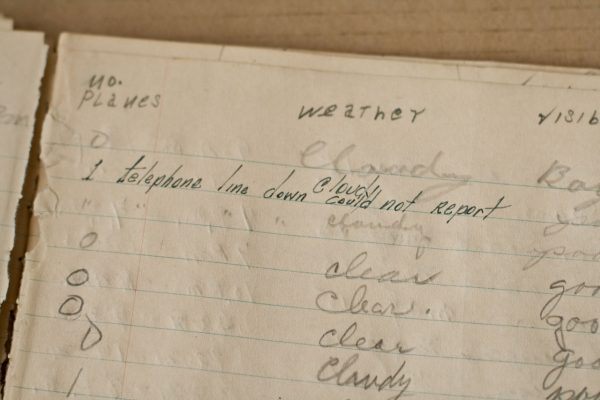 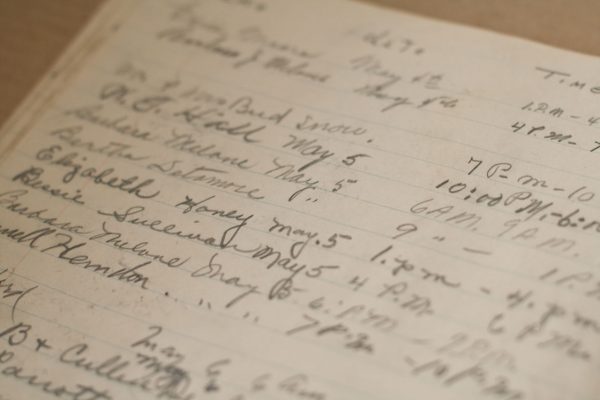 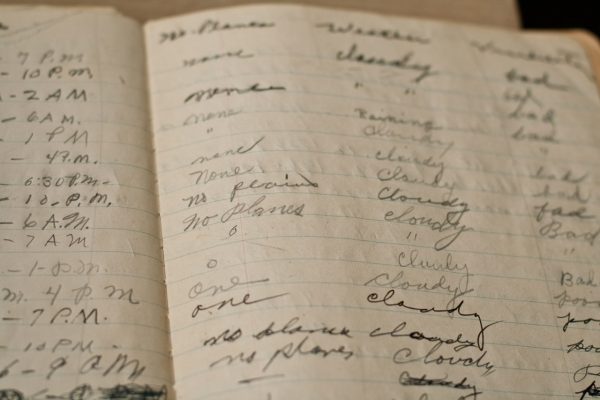 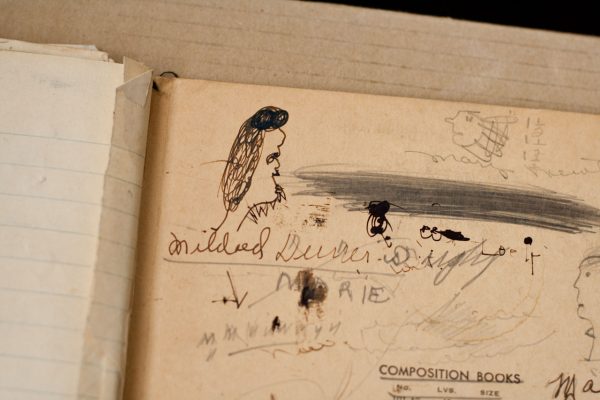 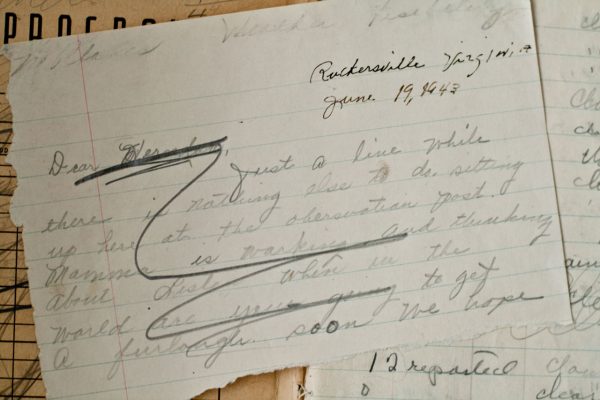 Other posts reported very little activity and many a night went by without spotting a plane.  Observers at Post 43-B in Swanville, Maine, spent their time on duty making baskets, writing letters, reading, sewing, knitting, doing crossword puzzles, making airplane models, and playing pranks.  As efforts began scaling back, then-Secretary of War Henry L. Stimson wrote to thank the volunteers for their service:   “During your period of duty with the Aircraft Warning Service, you have learned many facts which, if made public, might be of service to the enemy…The War Department looks to you to maintain silence with respect to these matters of national security.”   On 29 May 1944, the Aircraft Warning Service became inactive.

The planes observed, in large part, were friendly.  Only once was a German plane with American markings spotted over West Palm Beach, Florida.  The plane was captured in Europe and returned to the United States for examination.   In the end, few enemy acts were directed against the continental United States.  The Japanese launched 9,000 bomb-carrying balloons against the U.S., but less than 300 reached the shores.  Very little damage occurred.  At its peak, the AWS numbered 750,000 individuals—12,000 in filter and informational centers.  Due to the Cold War threat, the Ground Observer Corps continued until 1959.  Since that time, nationwide public participation has taken on a whole new meaning In American culture.

Despite earning wings and merit badges and numerous certificates of appreciation, these civilian volunteers have largely faded into history.  This generation has kept their silence—personal pride is deeply intertwined with pride of country.  Upon the death of a local high school Spanish teacher in Stafford County, Virginia, Roselle Blackburn, I learned that she had been part of the remarkable AWS story.  A few of the observation towers have been preserved as landmarks. You can relive a part of this patriotic moment in history at the Library of Virginia with the Greene County Ground Observer Corps Post 128-G Log Book, which is open and available to researchers.