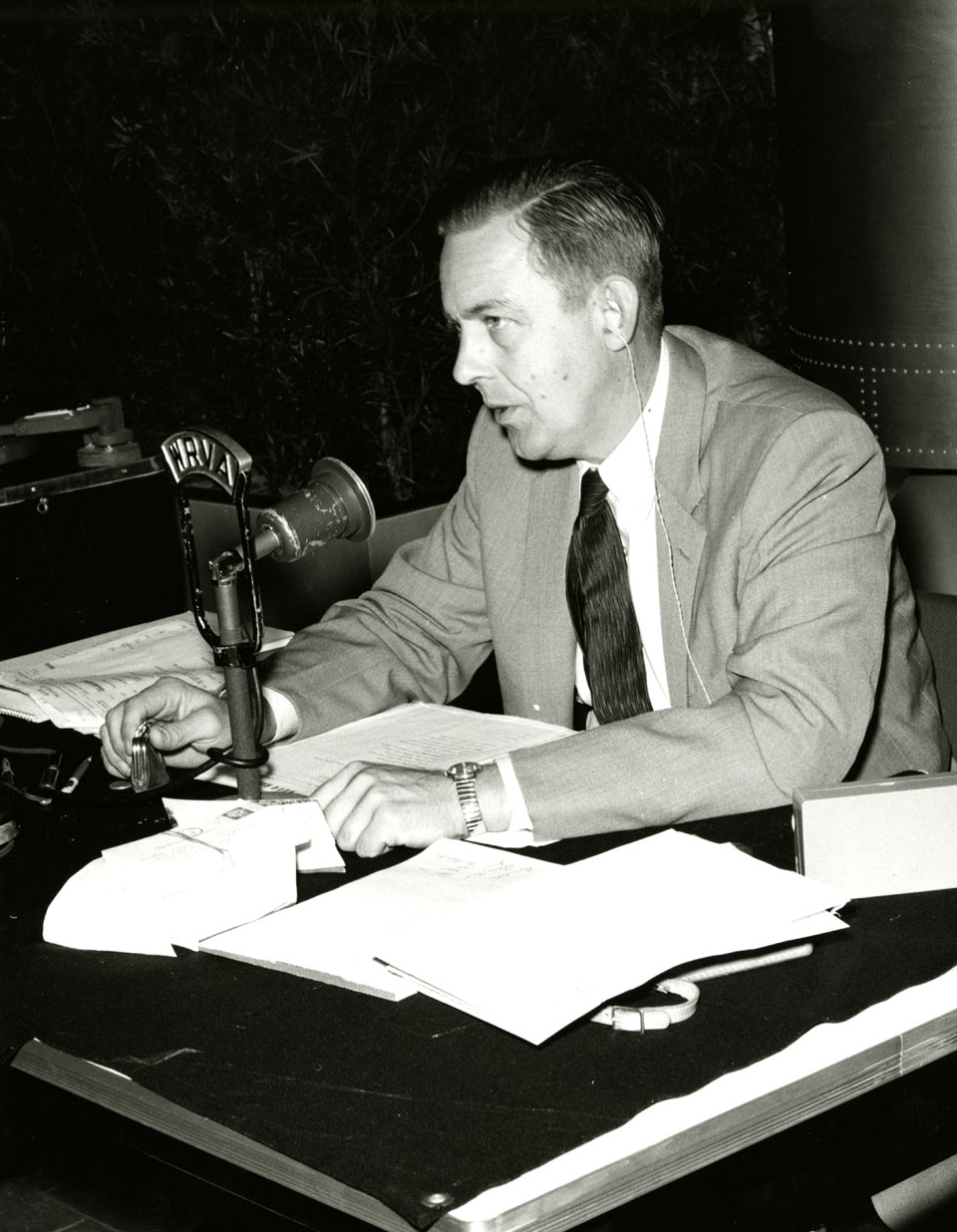 News of a tragedy

Most of us—whether we were alive at the time of the event or learned about it from parents and grandparents, books, magazine articles, documentaries, and movies—are familiar with the basic details of the assassination of President John F. Kennedy on 22 November 1963 in Dallas, Texas.  This week, reminders of the tragedy are ubiquitous, as the marking of 50 years since that day spurs historians, news outlets, conspiracy theorists, and others to again go over the sudden snuffing out of the “leader of the free world.”

One of my least-favorite terms as an archivist, only due to its extreme over-use, is “bringing the past to life.”  However, I can’t help but use that phrase to describe the sort of record that we are highlighting on the blog today.  Included as part of a sizable trove of news recordings in the WRVA Radio Collection (Accession 38210) is a special report which aired that very evening, just a few short hours after the death of the president.

Even in the early 1960s, the nation was able to hear important news almost as soon as it happened, and WRVA listeners were fed anxiety-producing bulletins (some provided by NBC News) from approximately ten minutes after the shooting until the heartbreaking confirmation of Kennedy’s death came over the station’s airwaves at 2:36 p.m. Eastern Standard Time.  This program, “The Death of President Kennedy,” likely aired at 5 p.m., and featured a re-telling of how the day’s events played out, with clips of what listeners heard as the story unfolded, new material including man-on-the-street interviews of stunned Richmonders, and commentary by the unnamed WRVA announcer.

Listening to the opening words of the program (“President Kennedy is dead.  He died this afternoon at approximately 2 o’clock…at the hands of a so-far unknown assassin”) transports modern listeners back to that moment, now 50 years past, when this information was in fact raw, barely-processed news.  The sun was going down on a nation plagued by thoughts, fears, and questions that no one had imagined when waking up that morning.  The announcer’s voice, somber and measured, may have had a calming effect on anxious, saddened listeners, even as it mirrored their shock and grief.

The immediacy and newness of what Richmond and the world were experiencing also comes through in the other segments of the program, beginning with clips of statements by Governor Albertis Harrison, 3rd District Congressional Representative Julian Vaughan Gary, and Senators Harry Flood Byrd and A. Willis Robertson.  In addition to their expressions of sympathy, Gov. Harrison called on citizens to unite behind the new president, and Rep. Gary cautioned that the assassination “demonstrates the danger of the growing fanaticism in this country.”  The emotion is obvious in Richmond Mayor Eleanor Sheppard’s voice as she sends condolences to “the bereaved mother and children” and notes incredulously that “it’s something you couldn’t believe would happen here.”

The man-on-the-street interviews that come next were conducted by WRVA personality Alden Aaroe.  With the sounds of Richmond traffic bustling in the background, Aaroe elicits commentary from men, women, and children walking by.  One woman states that, “If they didn’t like what he was doing, they should have got him out of office, they had no right to shoot him.”  Another comments on how sad it must be for Mrs. Kennedy, as she had just lost a baby (son Patrick, born prematurely, died in early August 1963).  One man, a visitor from North Carolina, calls on listeners to join a group meeting in Capitol Square at 6 p.m. “to share their sorrow and pray for our nation,” while another states somewhat prophetically that “I don’t think [the killer will] ever get out of Dallas…even get to the jail.”

The program closes with prayers from three Richmond religious leaders, from St. Paul’s Episcopal Church, Beth Ahabah Temple, and First Baptist Church, before the announcer gives some final thoughts and details.  The strain of the day shows somewhat as he mistakenly gives the president’s date of death as the following day, November 23.  He wraps up by paraphrasing an English literary figure: “Many years ago, [Algernon] Swindburne said, ‘All our past acclaims our future.’  As it is with us, shall it be with him.”

After a short clip of classical music, the program ends with the local cancellations and postponements resulting from the day’s news—the  Douglas Freeman High and Armstrong High senior plays, an NAACP branch meeting, and the Richmond Teenage Stamp and Coin Club meeting, among others.  Life would not return to normal just yet.

The WRVA News Collection (Accession 38210) is open for research at the Library of Virginia.  This particular recording is filed within that accession as WRVA-397.