This is the fourth in a series of posts spotlighting recently released email from Governor Tim Kaine’s administration.  These posts are not meant to be comprehensive but to encourage further exploration in the Kaine administration records (electronic and paper).

Sunshine Week “is a national initiative to promote a dialogue about the importance of open government and freedom of information.” In honor of Sunshine Week, 16-22 March 2014, this week’s post focuses on how a 2008 Freedom of Information Act (FOIA) request by a state delegate led to a Kaine administration prohibition on printing by state agencies.

In November 2008, Delegate Scott Lingamfelter (R-31) submitted a FOIA request to all state agencies asking for a copy of each publication with a print run exceeding 100 copies.  He also wanted to know the printing costs for each publication and the name of the printer.  Upon receipt of Lingamfelter’s letters, agencies contacted Kaine administration staffers for further guidance.

Gena Boyle, special assistant to the governor for policy, forwarded one such email to Chief of Staff Wayne Turnage on 1 December 2008.  Turnage replied that “I’m sure he [Lingamfelter] expects to find millions in printing costs.  With the advent of web to hold reports he will be disappointed – I hope.”

With the support of Delegate Lingamfelter, the administration consolidated his requests and treated them as one FOIA request.  Deputy Chief of Staff Stephen Harms directed cabinet secretaries to compile the following information from their agencies in spreadsheet form:  number of copies printed, name of printer, and printing costs.

Each cabinet member forwarded this information to Turnage, Harms, and Larry Roberts, counselor to the governor.  The final numbers were staggering.  State agencies spent nearly eight million dollars on printing costs between December 2007 and December 2008.  In a 12 December 2008 email to Harms and Roberts, Turnage wrote “Larry, we need to take some action on this giving [sic] the magnitude of the spending.  Can you communicate that to the Delegate and find out how we might do so without stealing his thunder.” 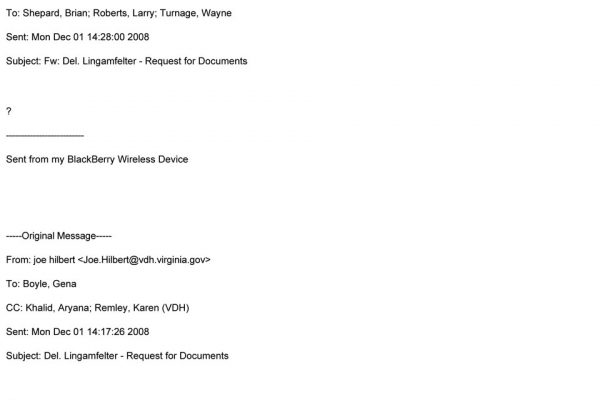 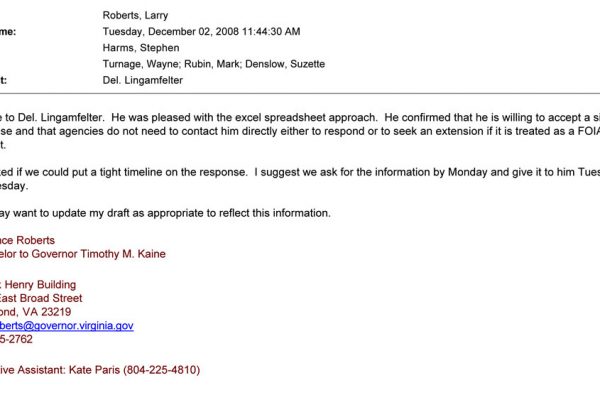 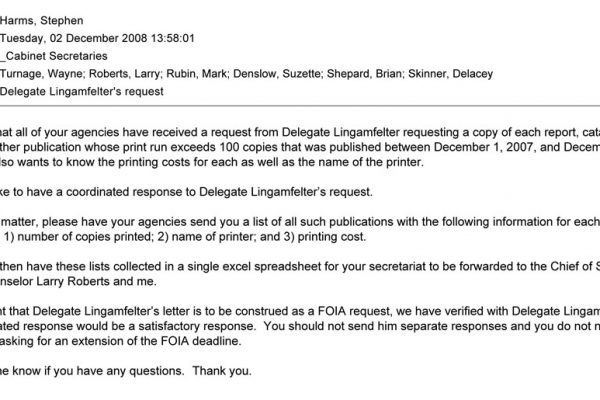 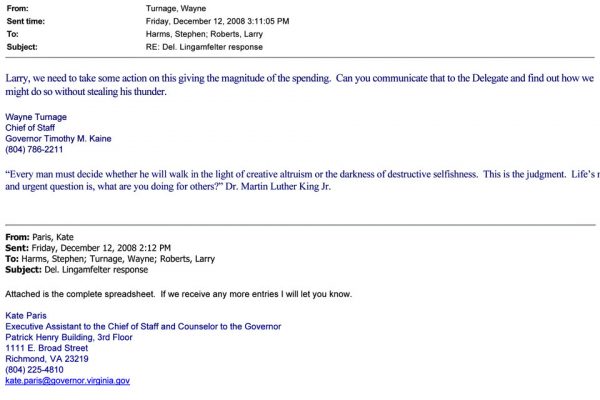 On 5 January 2009, Turnage informed the cabinet of the prohibition on printing by state agencies:

“As a result of a FOIA request from Delegate Lingamfelter on Commonwealth printing costs we have learned that Executive branch agencies are spending nearly $8 million annually to publish various sundry documents.  In these tight economic times this expense is uncomfortably large.  Moreover, with the wonders of technology much of this expense is unnecessary.

Accordingly, please inform your agencies that effective 1-6-09, there shall be no further use of State Resources (general and nongeneral fund) to pay for the printing of documents.  Agencies are allowed to request business case exceptions for documents which must be printed in support of the organization’s mission (e.g. brochures and maps for Tourism, certain DMV driving manuals).  However, all other documents should be made available electronically, and this includes all annual reports.”

In a 6 January 2009 letter to Lingamfelter, Governor Kaine included a copy of this directive.  He also thanked him for bringing this issue to his attention.  Lingamfelter issued a press release on 9 January 2009 touting his efforts to “reign in excessive state printing costs.” Turnage thought the release was a bit over the top.  “I expected a little self promotion,” he wrote in a 9 January 2009 email to Roberts, Brian Shepard, and Lynda Tran, “but this seems a bit much.”   Tran, incoming communications director, responded “What are ya gonna [sic] do.  Least it really is saving taxpayer dollars.” 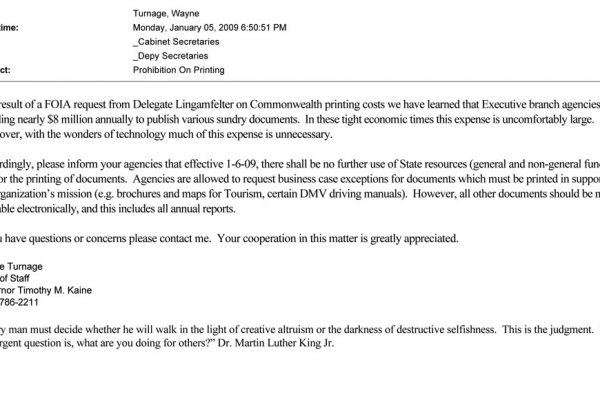 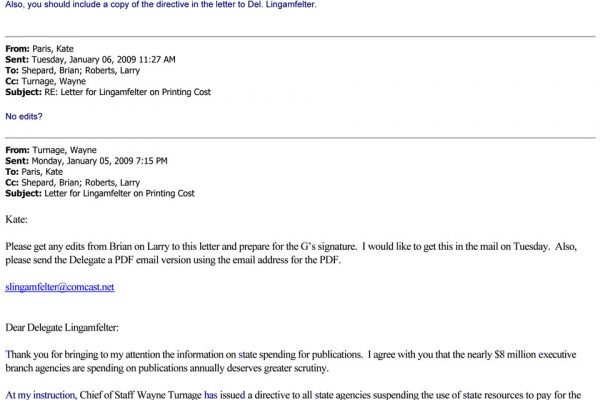 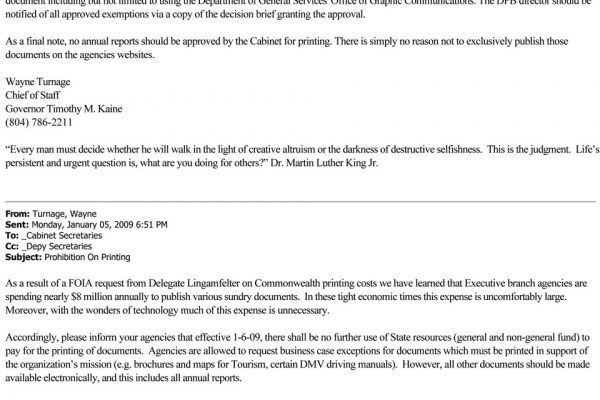 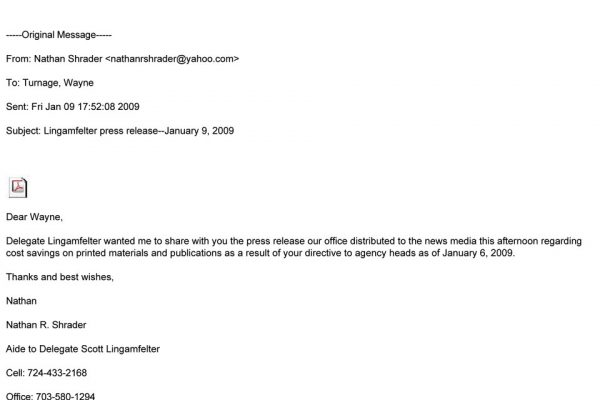 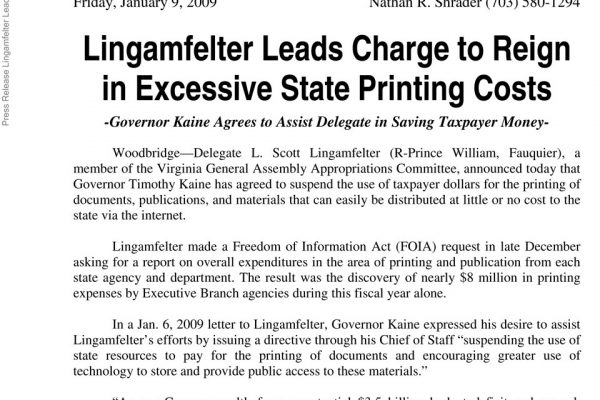 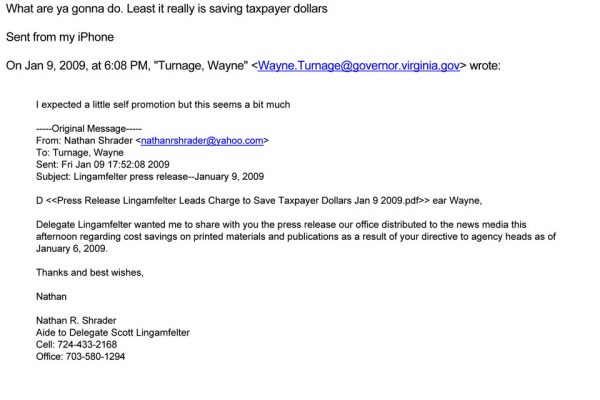 The Library of Virginia’s Kaine Email Project makes the email records from the administration of Governor Timothy M. Kaine, Virginia’s 70th governor (2006–2010), accessible online. Users can search and view email records from the Governor’s Office and his cabinet secretaries; learn about other public records from the Kaine Administration; go behind the scenes to see how the Library of Virginia made the email records available; and read what others are saying about the collection.  Previous posts spotlighted personal stories, transportation, the state budget and the Kaine records officers. This project would not have been possible without funding provided by Congress for the Library Services and Technology Act (LSTA).