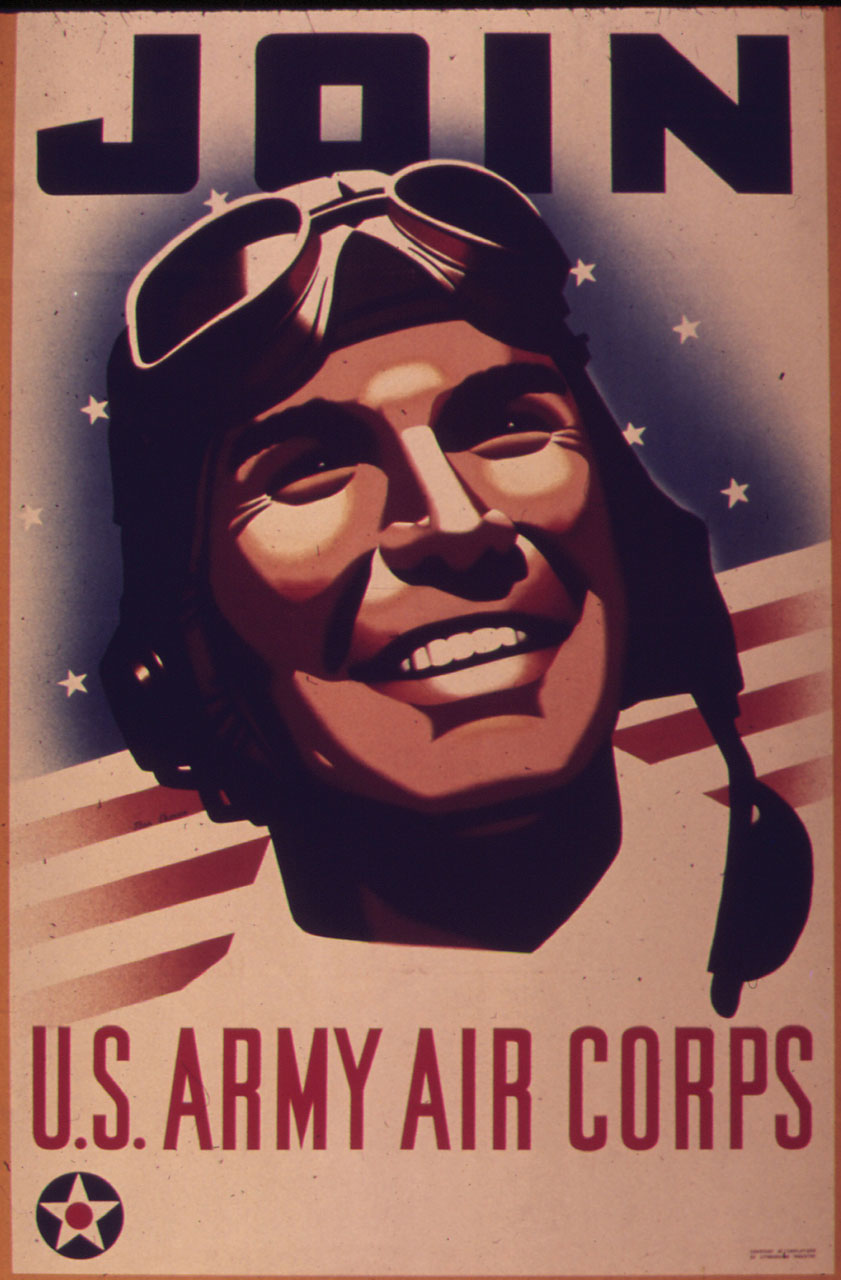 “There’s only one thing I don’t like about Combat–It Ain’t Safe!”

When John Hager Randolph Jr. wrote to his parents in Richmond near the end of his Virginia Military Institute career in the spring of 1942, he had a few things on his mind. There were the girls he was interested in, the potential for a “bawling out” from Mom and Dad once they received his grades, and the average college student’s ever-present concern: money (“Please send me the money soon!” was his plaintive postscript to one letter).

But, while his life at this point resembled that of pretty much any other soon-to-be graduate, Randolph was on the verge of a new chapter of adventure and danger, thrown in the midst of one of history’s greatest conflicts. His service as a World War II bomber pilot is detailed in the letters he sent home, preserved in the John Hager Randolph Jr. Papers (Acc. 51038) at the Library of Virginia.

After VMI, Randolph entered the Army Air Corps, training stateside as a pilot with the war looming ever larger in his future. At the end of a prolonged period of uncertainty as to his eventual assignment, he found himself heading to the Pacific Theater in the spring of 1945.

There, he would take part in an aerial battering of Japan that would test its resistance to surrender before the atomic bomb finally brought it down.

On 27 April 1945, having just completed the ocean voyage from California to the Mariana Islands, Randolph writes that “We are still taking some training but I guess we are about ready for the big game now.”  No letter survives telling of his first raid, but by 4 May Randolph is already showing the strain of his new responsibilities. He makes apologies for writing while in poor spirits: “I always said I wouldn’t write any letters on the eve of a raid, because of my usual case of melancolia [sic].” Succeeding letters show him participating in raids fairly frequently. Encouraged by the official news of Germany’s unconditional surrender, hopeful that Russia will redirect its resources to the Pacific, and feeling that Japan could not long sustain “the burning and blasting we’re giving Tokyo, Nagoya, and other cities,” he asserts that “they must know they can’t win” (9 May 1945).

Randolph begins to take to the job, writing on 11 May 1945, “Dearest Mother, I feel just like a hero now. We flew over Japan yesterday in the largest raid ever pulled.”  He adds incredulously, “I know you all have heard about the raid because, before we got back home, I picked up San Francisco on the radio and heard a description of what damage we had done. How about that? This is a funny war—you people back home hear about a strike before it’s even completed. I call that ‘hot news.’”

As the days and weeks go on, Randolph’s letters are increasingly filled with details of the raids in which he takes part. Fixated on the goal of helping bring Japan to its knees, he gives his assessments—at times critical, at others jubilant—of each trip. The language is occasionally jarring to those who have the luxury of never having been in the center of a life-or-death international emergency. “I guess there was a ‘hot time in the town of Nagoya’ last night,” he wrote on 15 May 1945. “The fires were beautiful and big, and I think we did a lot of damage.” 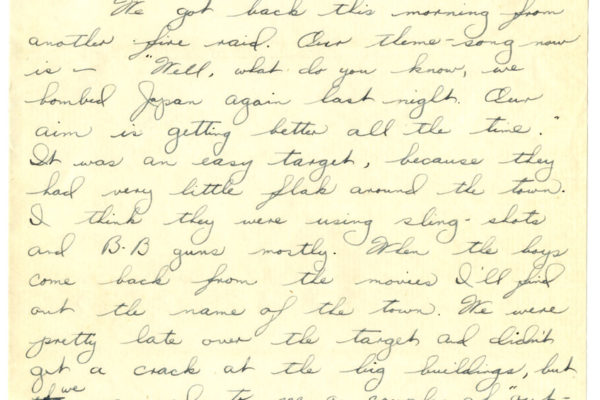 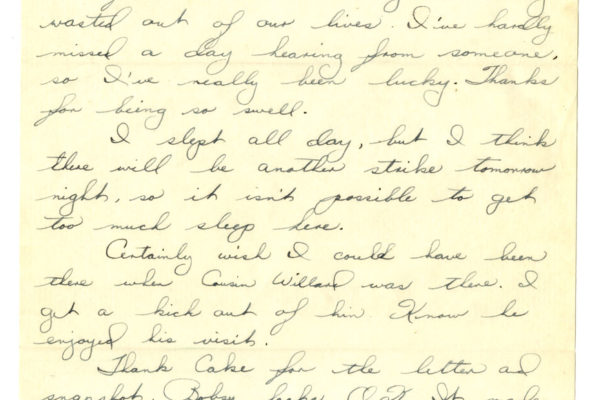 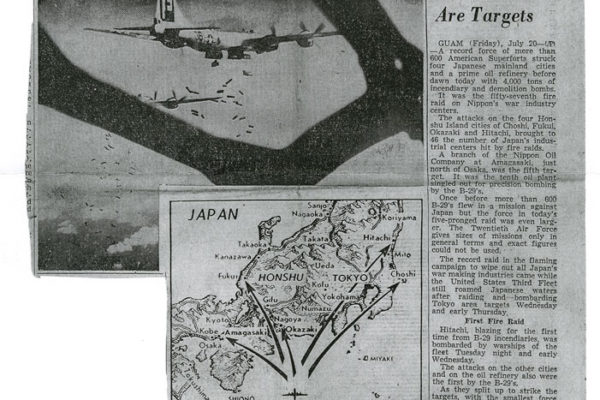 He often writes from the air while flying back from a raid (“This is a real Air Mail letter telling the hottest news there is!” 17 May 1945), and frequently comments on the hairy conditions he and his comrades faced, from return fire (“I hope we don’t have to go back there, ‘cause the flak is pretty accurate and there’s plenty of it. Too darn much,” 15 May 1945) to concerns about running out of fuel on the way back (“The only thing I do on the return trip is ‘sweat out’ the gas. Frankly, I don’t think we’ll make it this trip—but, what the hell, I always get a kick out of jumping,” 17 May 1945).

In late May he is sidelined by a “Charlie-horse” that develops on one of his missions and lands him in the hospital for a month. Frustrated by the injury, plagued with boredom, and anxious to get back to the task at hand, he worries that “they may try to ‘ground’ me. I can take anything but that” (7 June 1945).

When Randolph is sent to Guam for further treatment he becomes even more anxious to return to the air. “With ‘home’ to look forward to, I really feel like I want to fly every mission I can,” he writes on 11 June.  “I want to get back as soon as possible, but I don’t want to see this job, over here, done in a half way manner.”  He follows with a lengthy, rather passionate assertion of the need for total victory over the Japanese, then self-consciously concludes, “Well, now that I have that off my chest just call me ‘Killer Jack.’”

His stay in the hospital gives him time to think, and for newfound maturity to show. The former college kid with his hand out for parental financial aid instructs his father to use his combat pay to buy his mother an electric refrigerator. He begins making plans for the future, signing up for a correspondence course in accounting and refusing his father’s offer to pay for it—“I am no longer a dependent school-boy” (19 June 1945).  He jokes about his lack of success wooing the nurses (“I guess I’m loosing [sic] my grip with the women, ‘cause I ain’t doing so well with ‘em”) and instructs his parents to “keep your eyes open for a likable daughter-in-law” (15 June 1945).

By the end of June, he is finally cleared to return to duty, and gets encouraging words from a superior officer who hints at future promotions. “I’ve got him fooled. He thinks I ain’t scared,” Randolph writes. “Ha ha. We know better!” (26 June 1945). His mixed feelings about returning to combat are revealed in similarly joking fashion when he writes on 27 June that “There’s only one thing I don’t like about Combat—It Ain’t Safe!”

Randolph returns to the skies, feeling a mixture of nerves and steely commitment to duty. He decompresses on the return flights by writing to his family and working on his correspondence course assignments (“I’ll bet I’m the first one to ever study accounting on the way back from a combat mission,” he writes in the early morning hours of 13 August). His letters also offer glimpses of major issues of the day: “Last night from about ten until two this morning we had a heated discussion on the Negro Problem in the South. Now the other boys have just come back from breakfast and the racket has started again. Can you send me this book Black Boy? I think I would enjoy it. I’ve heard about it for five hours now, so I’m interested” (22 July 1945).

He updates his family on strike after strike as the missions pile up, one about every three days by his count (3 August 1945).  The intensity of Allied bombing of the Japanese Islands culminated with the dropping of atomic bombs on Hiroshima (6 August) and Nagasaki (9 August).  Still, the Japanese did not immediately surrender and Randolph faced one of his most challenging raids, targeting an aircraft plant in Tokyo.  “I’ll bet you people back home went wild when they announced the news about the atomic bomb,” he wrote from the air on 10 August as they returned from the strike. “We certainly did over here—were sure we would not have to pull any more raids. Maybe this is our last—who knows!”  He also casually notifies his parents that he was then riding in a plane with two large holes in the fuselage—“and I suppose we have a few more we can’t see.”

The raid was not his last, as he was in for yet more missions in the days leading up to the announcement of Japan’s surrender on 15 August.  The welcome news finally arrived and, just like that, his life began to shift back from the intense experience of a wartime bomber pilot to the slowed-down, unmapped path of a young man trying to figure out his future.  He found himself right back in the position he would have been in when he graduated from college in 1942—if a world war had not intervened.  “I feel like I had been on a ladder and someone suddenly pulled it out from under me,” he wrote on 16 August. “I really don’t know what to look forward to.”

His uncertainty ultimately faded, and the passage of time found Randolph going on to find success in the finance world, as well as additional service as a bomber pilot in the Korean War.  John Hager “Jack” Randolph Jr. died on 5 October 2003.

The John Hager Randolph Jr. Papers (Acc. 51038) are open for research at the Library of Virginia.