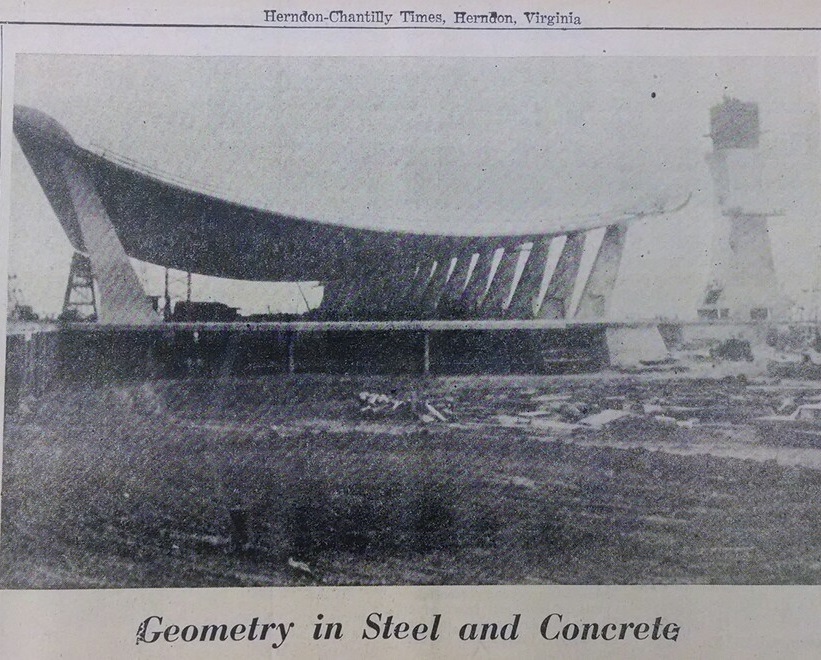 I didn’t anticipate opening today’s “Fit To Print” blog entry in quite this manner but I stumbled on it mainly by chance and, for someone with an already strong fondness for maps, the opportunity proved irresistible.  Below, the center two pages of the November 9, 1944 issue of the Herndon News-Observer: 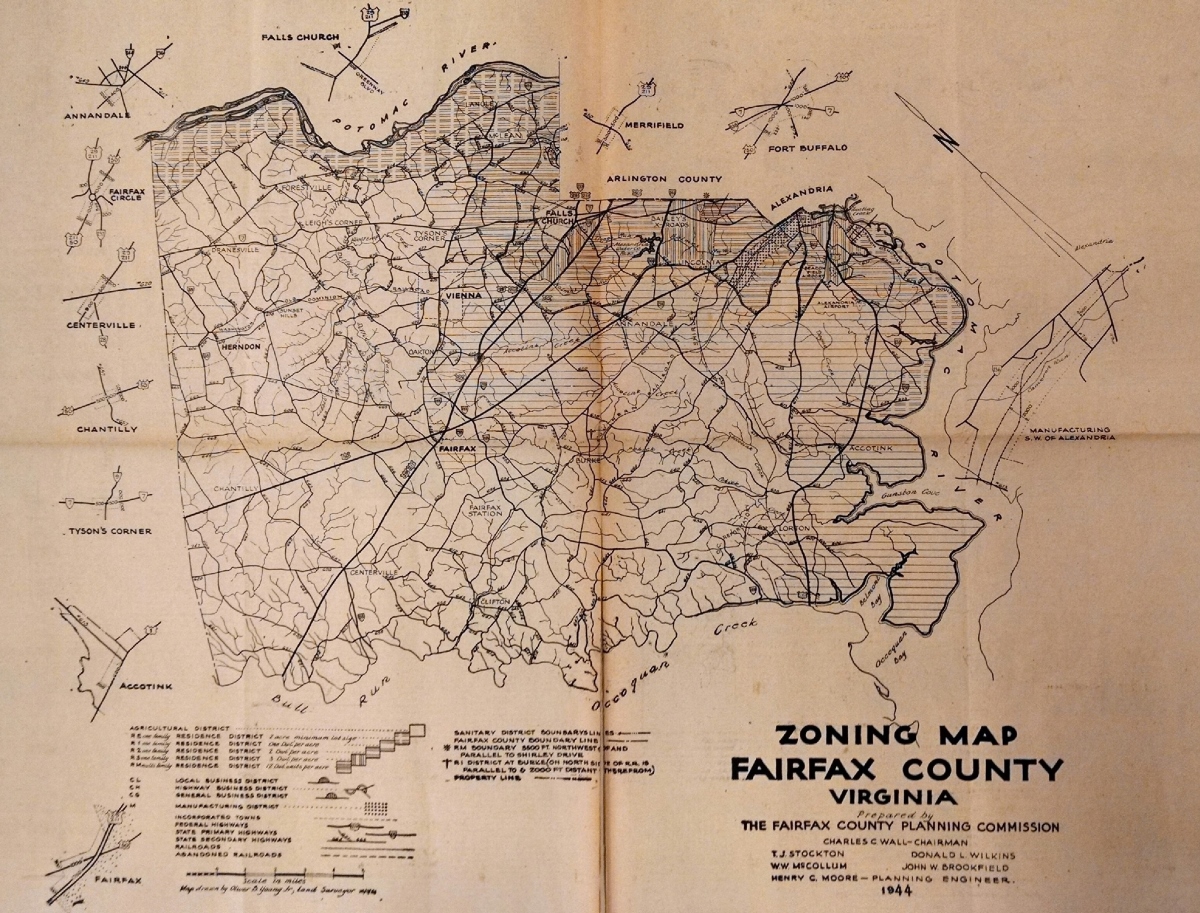 “Poor Fairfax County, it didn’t know what was coming”, remarked a colleague.  I imagined Til Hazel (if unfamiliar, google away) replying, “Poor?”   In 1950 the county knew a major airport in its borders was a real possibility; Congress had green lighted appropriation.  By 1955, it was determined that Burke (just east of the city of Fairfax on the map) would not be the site.  Organized resistance prevailed.  For planners now, the priorities were less resistance, a warmer welcome, and much more space-an important consideration for an airport with jets foremost in mind.  The decision was made to move west, to Loudoun County, leaving a trailing foot in Fairfax.  Here’s the Loudoun Times-Mirror, January 16, 1958. 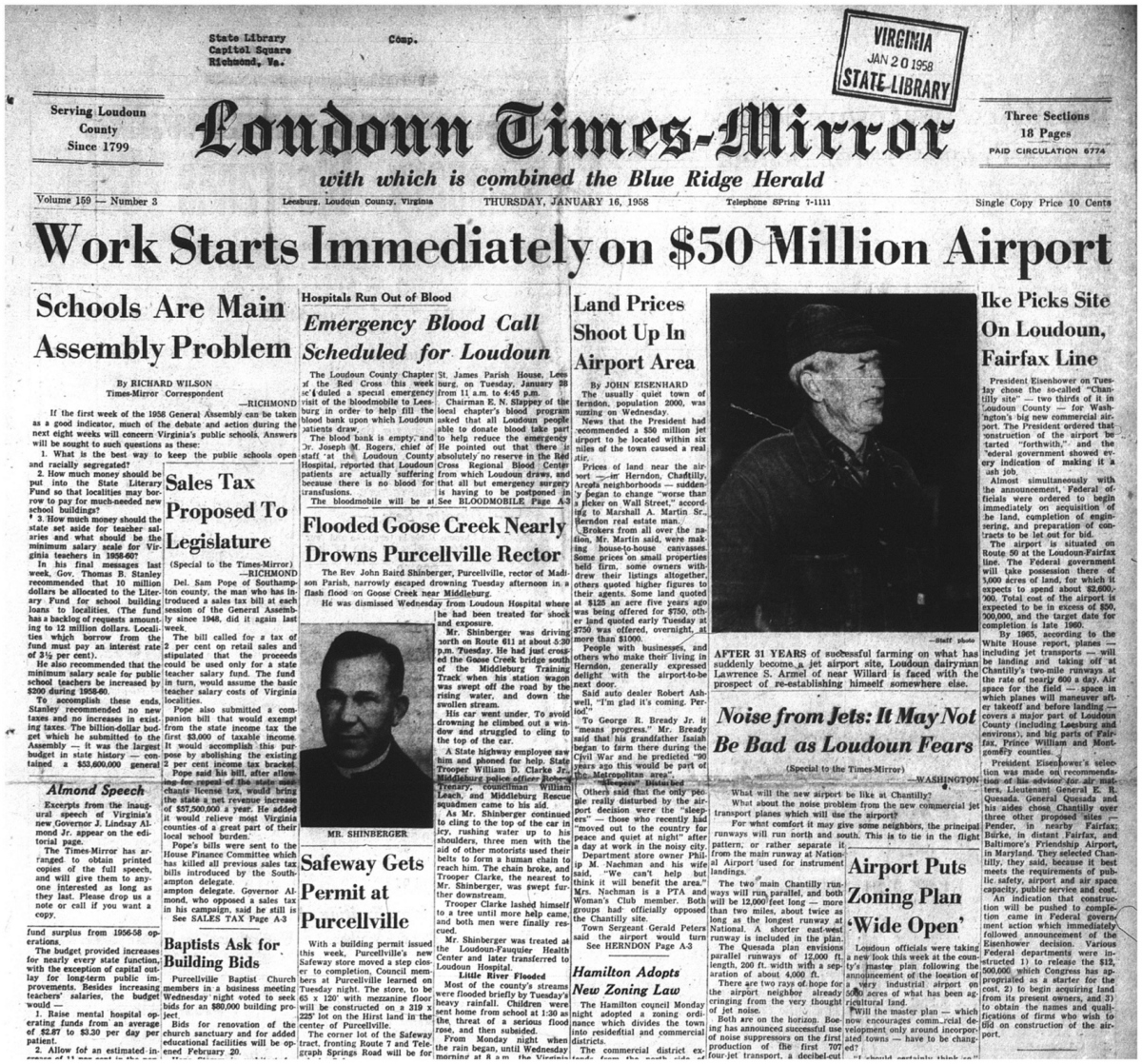 Then after the jump, this map: 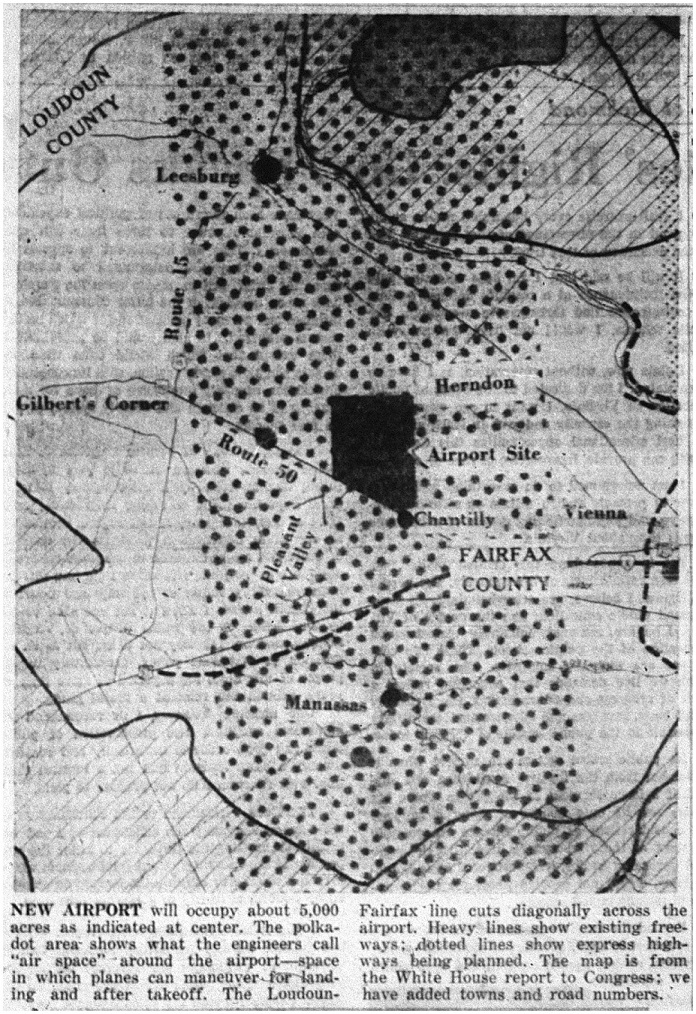 This was without question an economic life-changer and, for the local press, a huge story with multiple angles and it was forming directly in the front yard of the Leesburg based Times-Mirror.  But for Herndon (a historic town, incorporated in 1879) and Chantilly  (an intersection) it was on their front porch pressing against the door and promising a revenue wind velocity not previously reckoned.  The News-Observer was long gone, having departed later in the 1940’s.  An opportunity beckoned to establish a presence in boomtown, west Fairfax County.  The first issue of the Herndon-Chantilly Times (like the Times-Mirror, a weekly) appears on May 15 with the masthead describing it as an “edition of the Loudoun Times-Mirror.” By this issue the following July it reads as “affiliated with the Loudoun Times-Mirror.” 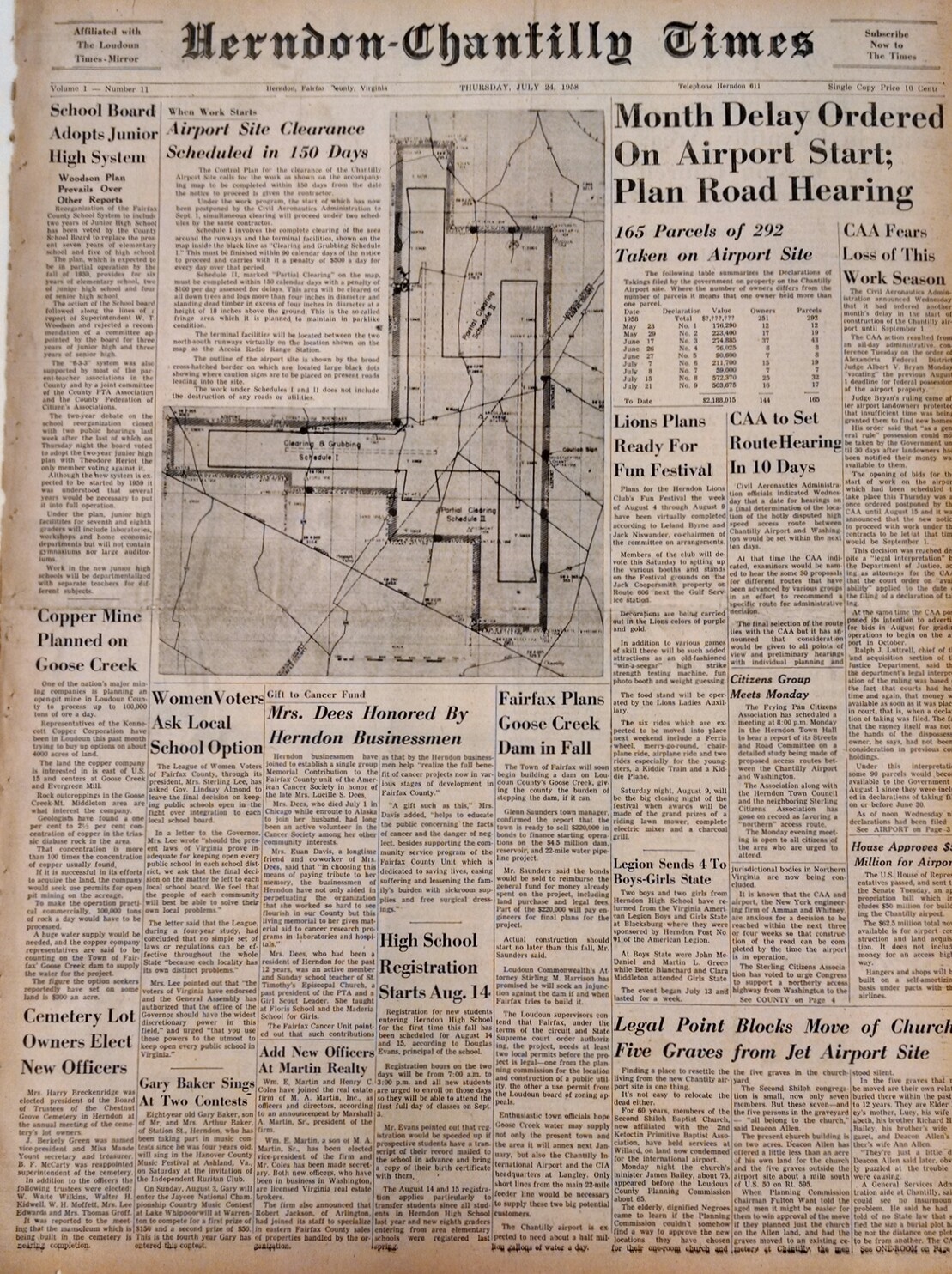 The founder in Leesburg would sometimes duplicate the copy of its offspring, but many added details, photos and a fresh layout originated in the smaller office which was located within a bank building in Herndon. In fact, the paper won a press award for the composition of its front page.  I read that on the front page.  The design was borrowed from the mother paper which, in turn, bore strong resemblance to the fonts and spacing of the Washington Post.   Here’s another issue from that same July which points to the changing character of the region-maybe the last front page appearance by a cow in a Fairfax newspaper. 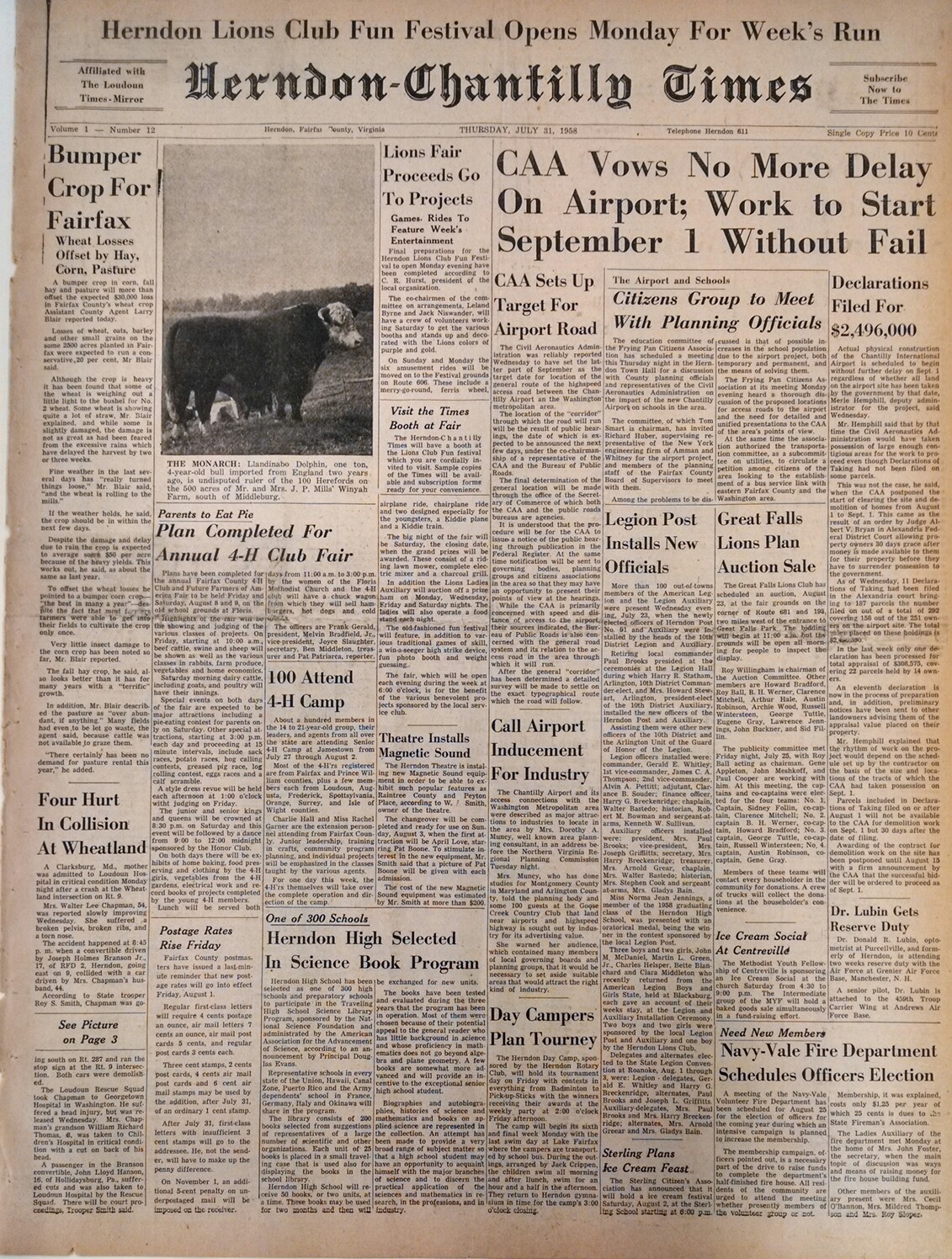 Federal land condemnation and the ensuing disruption to local farmers was an early issue of controversy.  The Times decided this ironic incident deserved a sidebar: 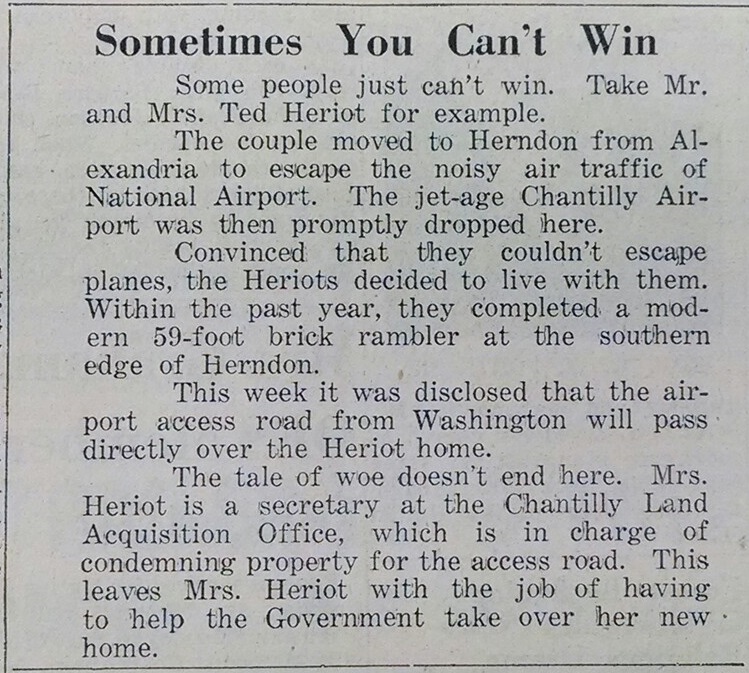 Eero Saarinen’s architecture for the terminal was revealed in February, 1960 and the Times charted its construction over the next two and a half years, though preceded by the less glamorous creation of runways: 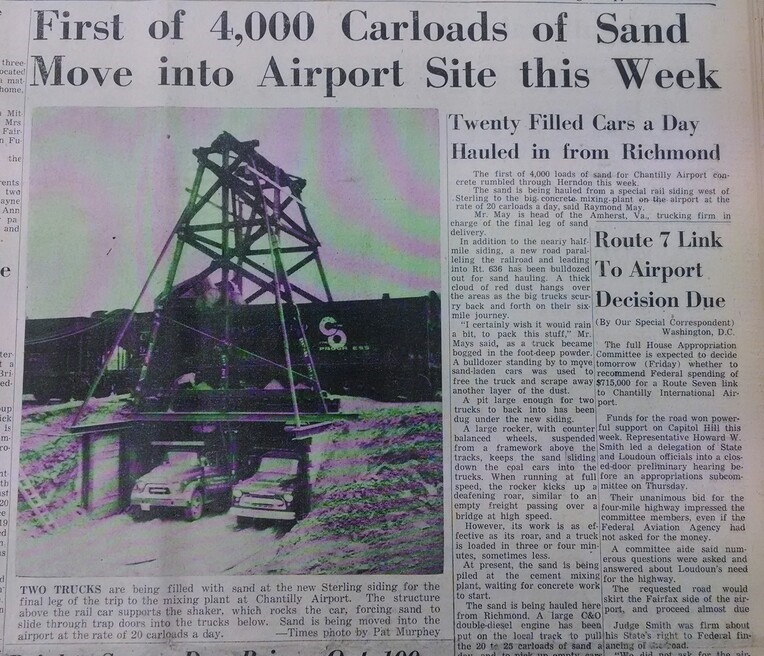 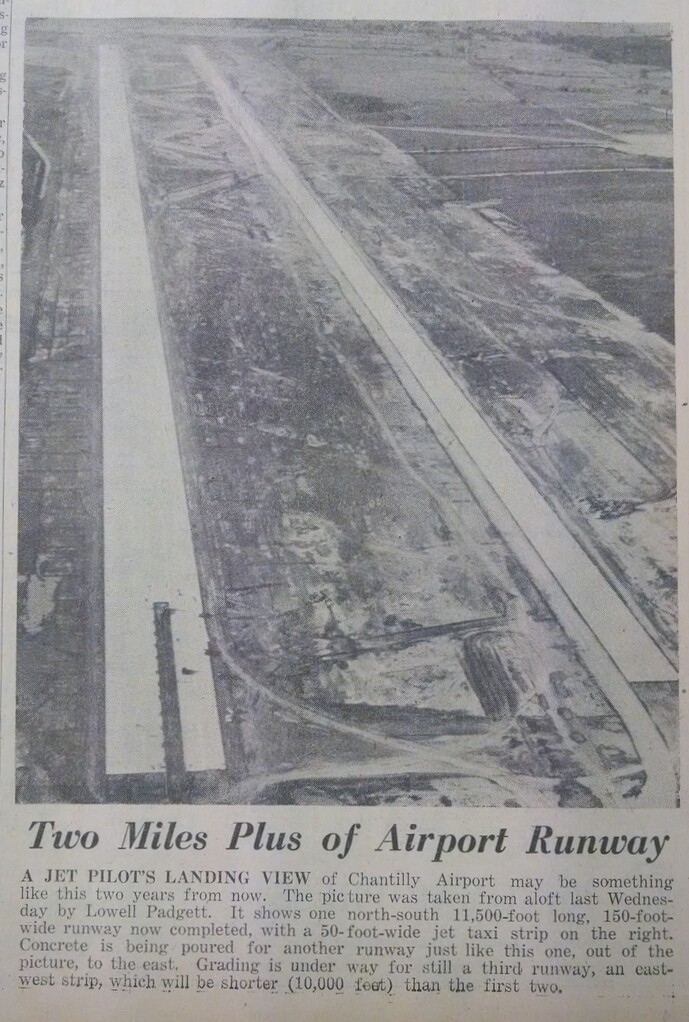 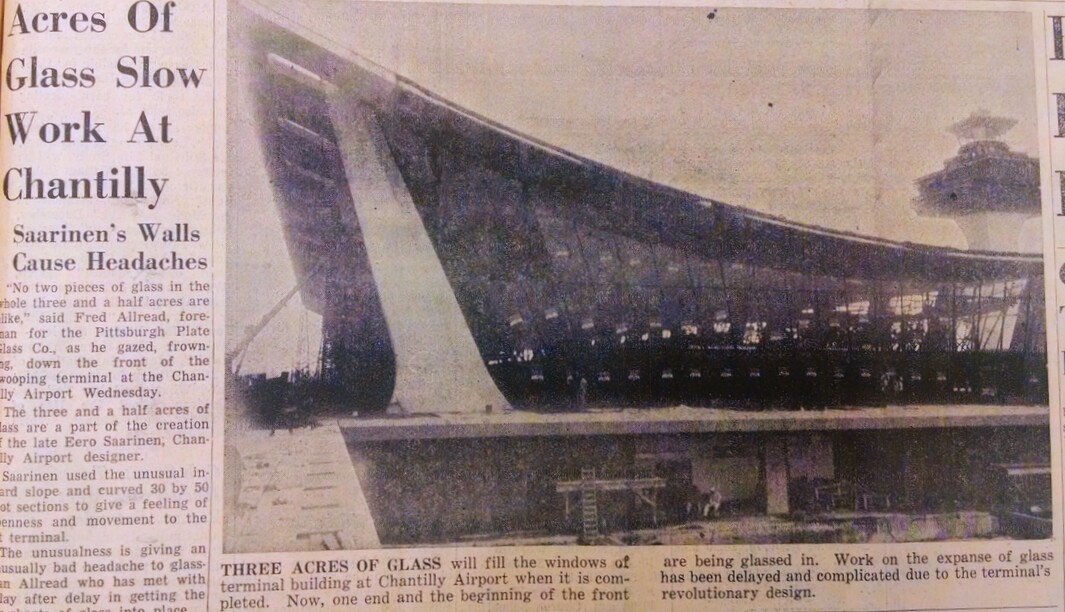 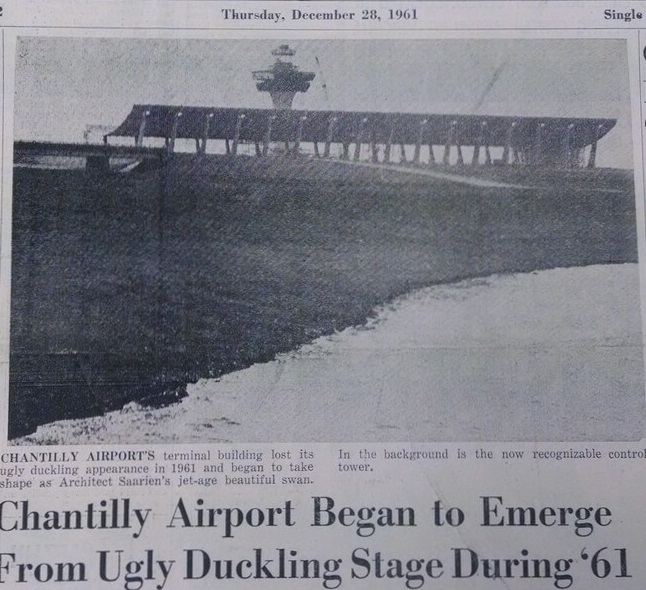 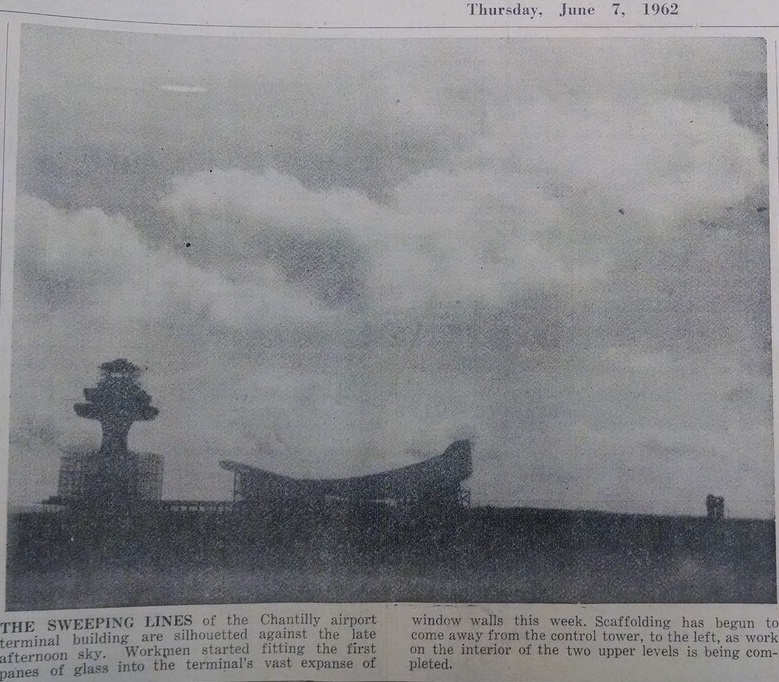 And then, with a suddenness  likely surprising to its readership, two months away from the airport dedication, with the issue of August 30, 1962, the paper folds and remerges with the Loudoun Times-Mirror.  That day’s editorial cited a desire to “promote and sustain a climate of mutual understanding…the scope of planning should be countywide to avoid a division of interests.”  I suspect a less than satisfactory bottom line and a circulation of only about two thousand added up to an extravagance difficult to justify.  Still, over a four year run, the Herndon-Chantilly Times, from its intimate perch, provided vigilance thorough and substantive over a project rare in scope and ambition.  Readers and editors alike were no doubt regretful they weren’t in business for this: 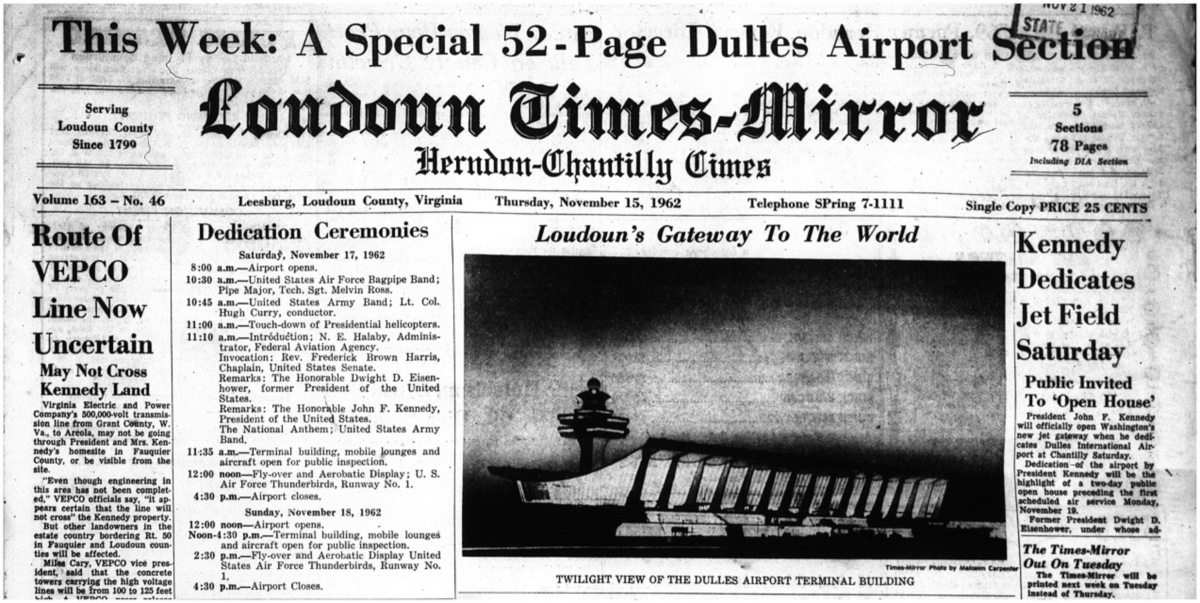 You’ll notice mention of Herndon-Chantilly in the sub-masthead.  This quietly vanished by the following April.  The Newspaper Project microfilming of this newspaper will be completed soon.