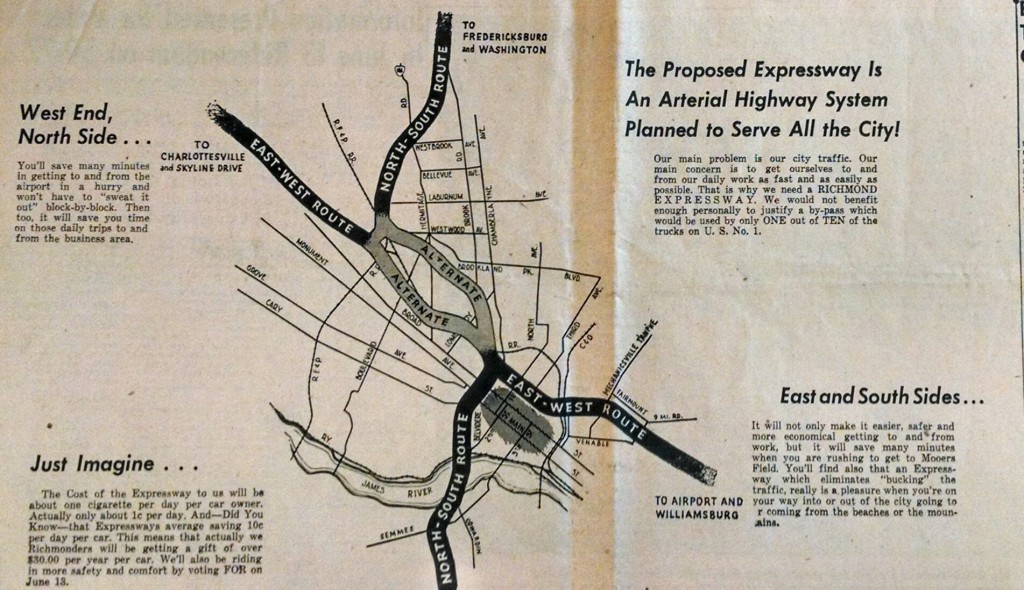 A Look Back at the Richmond Downtown Expressway

In our collection we have an unusual one-off edition of The Progressive Richmonder from June, 1950 that was circulated to promote support for the construction of a downtown expressway. The paper was produced by a group identified as the Forward Richmond Highway Committee. 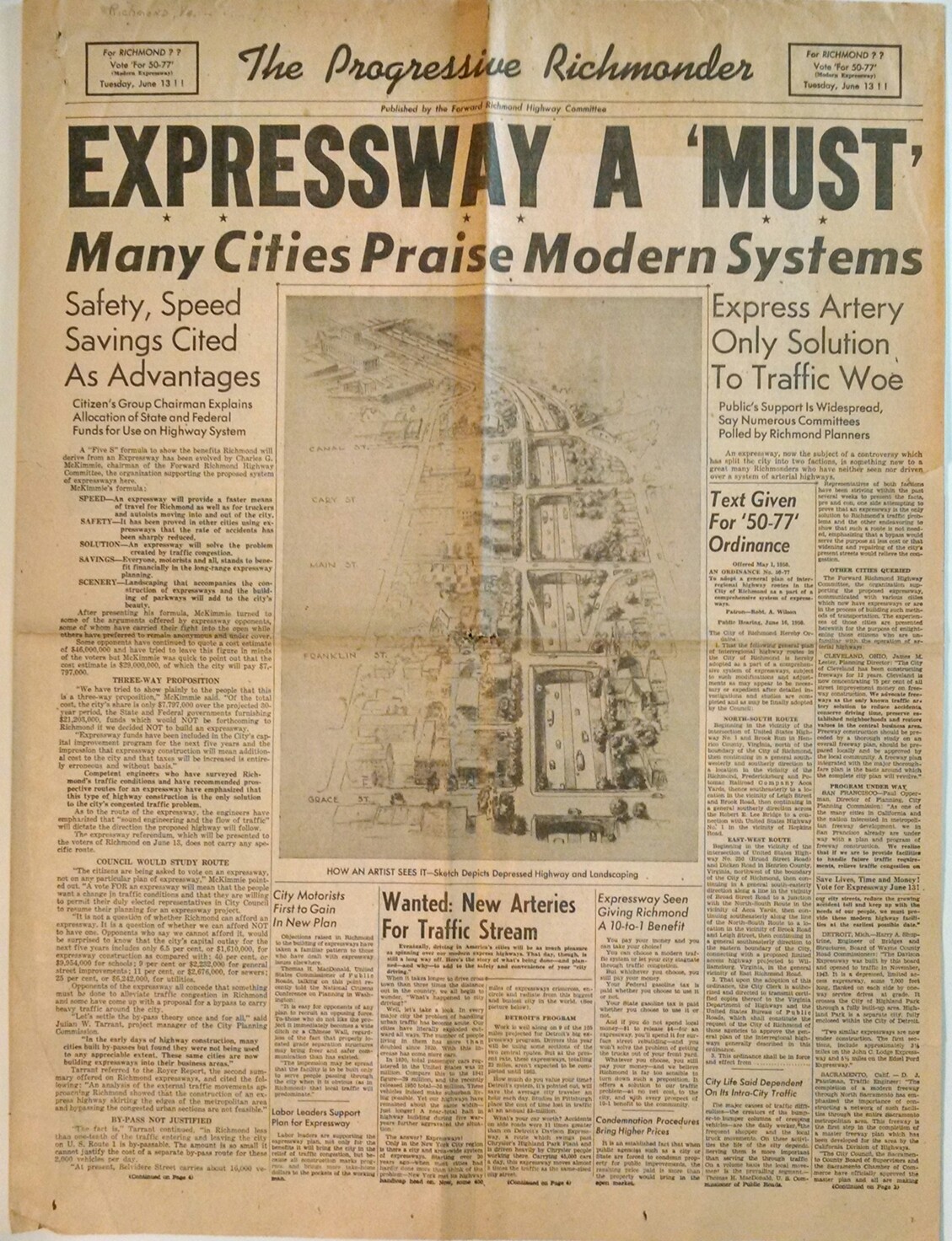 Front page of the PROGRESSIVE RICHMONDER from June 1950, a pro-Downtown Expressway specialty newspaper.

The object of the paper was to convince readers to support a referendum to be held at a Special Election on Tuesday June 13, 1950. The referendum did not propose a specific route for an expressway but was used as a gauge of the public’s support for the idea. The project’s total estimated cost was $29 million. Richmond’s contribution would be about $8 million dollars, with the Commonwealth contributing another $8 million and the Federal Government contributing $13 million.

The reasons given to support the expressway included that it would relieve existing traffic congestion, increase safety, faster travel for Richmonders, economic development (though the phrase did not yet exist, a proponent explained, “Everyone, motorists and all, stands to benefit financially in the long-range expressway planning.”), and scenery, “Landscaping that accompanies the construction of expressways and the building of parkways will add to the city’s beauty.”

Another argument used was that other cities had expressways in their downtown areas. An article cited examples in Detroit, Michigan, Sacramento, California, Houston and Dallas, Texas, and Hartford, Connecticut. It also stated a number of other localities were presently in the process of building expressways, the cities included Boston, Atlanta, Pittsburgh, Philadelphia, and Los Angeles.

Alternative solutions and complaints by the opposition are briefly mentioned and dismissed. “We are told that the expressway would be an unsightly ditch. But the engineers say that it will be a handsome roadway, mostly at natural ground level, but if below ground level, with sloping, landscaped sides. It would have no intersections, left turns, traffic lights, or pedestrians. It would provide for non-stop traffic flow. Experience has shown that it would reduce accidents by 80% — and eliminate pedestrian accidents entirely.” Others suggested a by-pass route and that was dismissed as not being capable of providing the required relief.

Possible routes for the Expressway

Page two include endorsements from a variety of Richmonders. 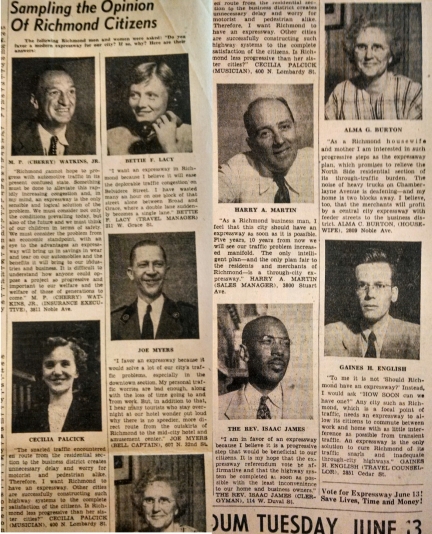 A handful of Richmond citizens weigh in on the matter

Page two also included reprints of editorials from The Times-Dispatch and The News Leader. The most interesting one references points raised by the opposition. I’ve included the text in its entirety below.

It would be interesting to know who is behind the widely circulated anonymous leaflet against the expressway. This shot from ambush is not apt to impress many Richmonders. They like contests, whether in matters of civic advancement or on the athletic field, to be fair and aboveboard.

The leading advocates of the expressway are well-known. They include many citizens who have been foremost in movements for the progress of Richmond. In striking contrast, the parties responsible for the anonymous pamphlets remain in hiding. They skulk behind walls and hedges and snipe at the opposition.

The pamphlet they have issued, and the typewritten sheet which accompanies it, contain so many flat falsehoods that no attempt will be made at this time to answer more than a handful of them.

For example, one of these unsigned documents says that “none of the expressways depicted by the expressway proponents or in the newspapers bisect a city; each and every one of the depressed highways shown go around the cities they serve.” A list of more than a score of cities, each of which is now building an expressway through its central portion, appears in today’s news columns.

Another amazing misstatement of the anonymous pamphleteers is that “the main objective in changing Richmond’s form of government was to put through the depressed expressway.” This is certainly news to The Times-Dispatch, which began intensive agitation for a new form of government in the middle 1930’s, long before the expressway issue was ever heard of. It must also be news to the Richmond-First Club and other civic organizations which likewise were working for the modernization of the municipality’s affairs a decade or more before there was any talk of an expressway. And if it was all a plot to get an expressway, why didn’t the new Council vote the expressway in as soon as it took office in 1948?

The additional argument made by our concealed friends that this whole expressway effort is part of a plot concocted by the Richmond newspapers, the two chambers of commerce and other sinister interest to ram the scheme down the throats of Richmonders, doesn’t make sense either. Have our anonymous admirers forgotten that The Times-Dispatch urged a referendum of the people on this very proposal? We suggest that they read our editorial of April 29 entitled “A Referendum Should Be Held.”

Other misrepresentations and falsifications widely distributed by the anonymous critics of the plan will be dealt with in this place from time to time. Some are answered authoritatively by proponents in today’s news columns.

The people of Richmond can choose on June 13 between the group which is frankly and publicly urging that this city join the march of enlightened progress by building the same sort of expressway that is being constructed in more than a score of cities from coast to coast, and the unknown group of skulkers who are afraid to fight in the open, and who are industriously spreading half-truths and outright falsehoods.

Knowing Richmonders as we do, we have no doubt that, once they are given the facts, they will vote for the expressway. There can be no other intelligent choice.

(Reprinted from the Times-Dispatch)

It’s interesting to see proof that pro-business boosterism in our government has existed in the city of Richmond for quite a long time. I can attest that it is still alive and well in Virginia’s capital city, as exhibited by the recent debate over building a baseball stadium in Shockoe Bottom.