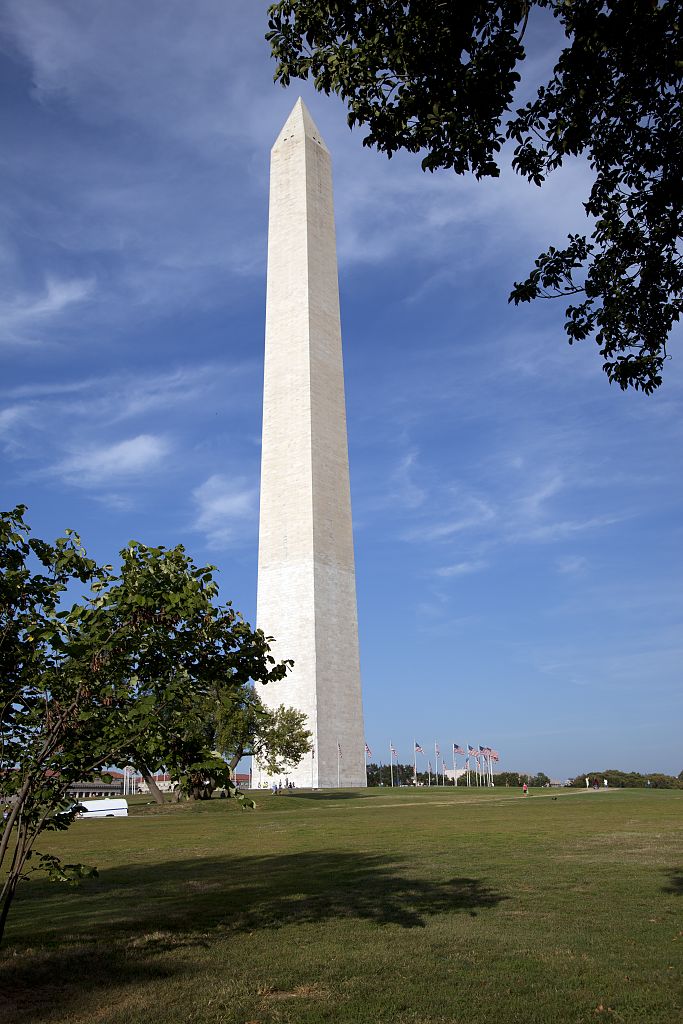 A Monument of Debt

The Washington Monument is finally reopening on 12 May 2014 after undergoing restoration for damage caused by an earthquake in August 2011. I was curious what the Library of Virginia had in its collections relating to the monument and discovered an interesting footnote to the history surrounding its construction. The Washington National Monument Society, a private organization formed in 1833 to fund and build the monument, solicited donations and designs for more than a decade before construction finally began in 1848. In 1854, the Society went bankrupt, leaving a partial structure that stood unfinished until Congress assumed the duties of funding and construction on 5 July 1876. Arlington County Judgment Samuel Harrison Smith vs. Thomas K. Beale, dated October 1838, sheds some light on why the Society found itself bankrupt.

The judgment concerns the work of James M. McRea, an agent for the Society sent to Alabama to solicit donations “for the erection of a great national monument to the memory of Washington at the seat of the Federal Government.” Included in the case are three letters sent by McRea during his travels in Alabama.

In the first, dated 2 April 1836 and sent from the then state capitol, Tuscaloosa, we discover that McRea did not travel alone but took along his family, causing a delay in his journey when his children were “attacked with ‘Meazles’ [sic]” outside of New Orleans. After finally arriving in Alabama, McRea met with Governor Clement Comer Clay, who received him with the “greatest kindness and cordiality,” showed much interest in the “noble enterprise,” and subscribed $5 to the endeavor. McRae described his next “embarrassing and yet pleasant duty” of addressing the students of the University of Alabama and the “fair pupils” of the Alabama Female Seminary, where he received another round of donations.  McRea expressed optimism for the project despite his fears that it was “an unfavorable time for our operations… owing to a recent destructive fire, and the absence of about two hundred citizens who volunteered to go to Florida against the ‘Seminole Indians.’”  But his “confident opinion” was that the “cause will prosper in Alabama, that my mission will be successful.”

Almost two months later, James McRea wrote again, this time from Mobile on 26 May 1836, and his outlook for the Washington National Monument Society was decidedly less optimistic. Due to the “great excitement and alarm… in consequence of the outrages of the Creek Indians,” McRae thought it inexpedient to continue soliciting contributions. In fact, McRea abandoned his role as agent for the Society entirely and, instead, signed on as quartermaster for a volunteer company expected to be on campaign for three to five weeks in Claiborne, Alabama. The justification for his career change was that the “officers are confidant [sic] that a very large sum will be contributed by the army.” McRea ends his letter by reporting that total contributions did not exceed $800 and that his “expenses have been very heavy but every cent will be faithfully accounted for.” 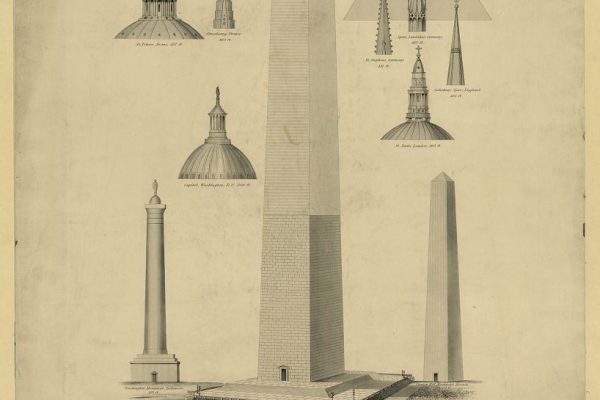 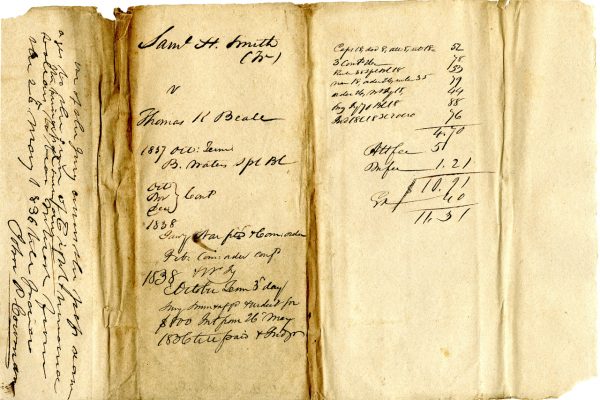 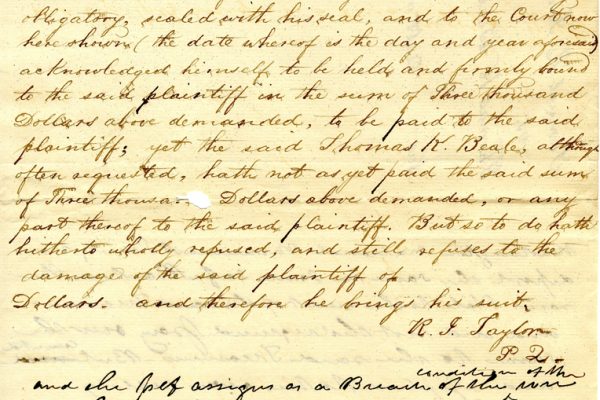 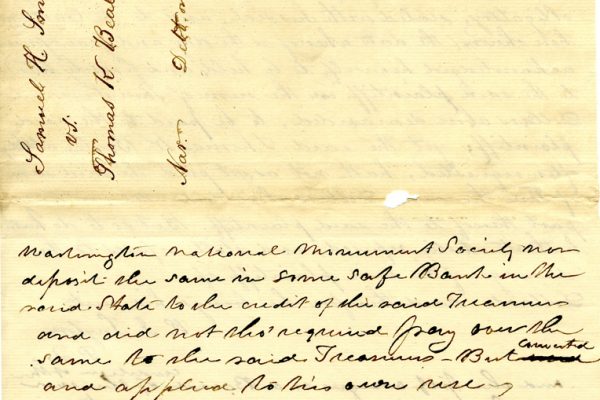 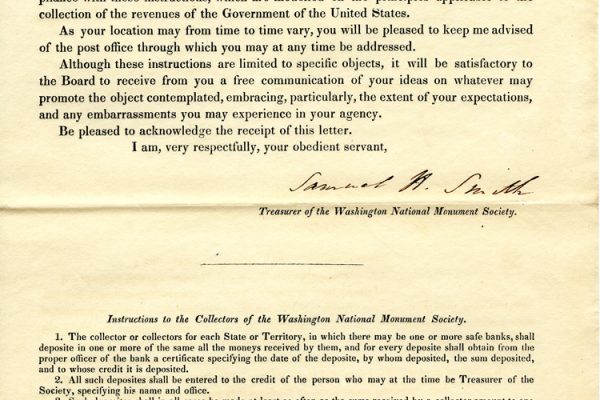 Circular to the Collectors 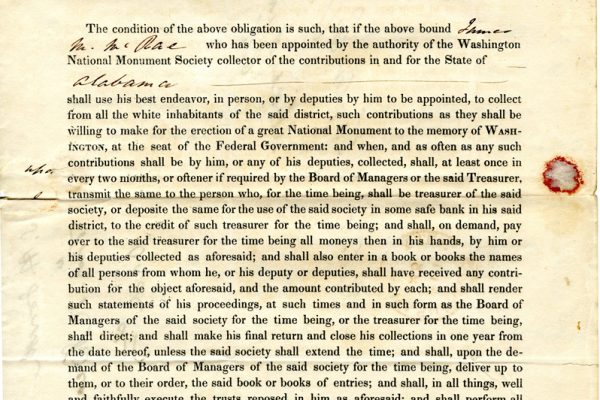 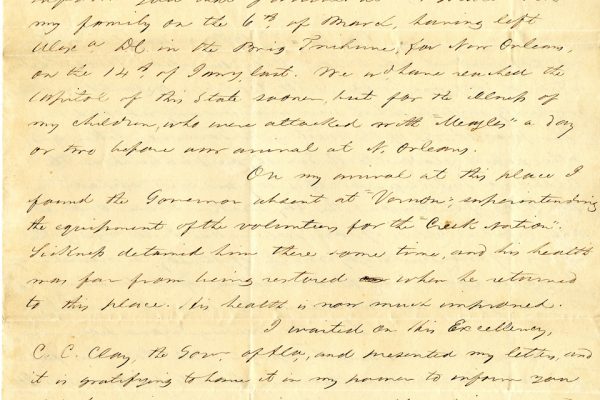 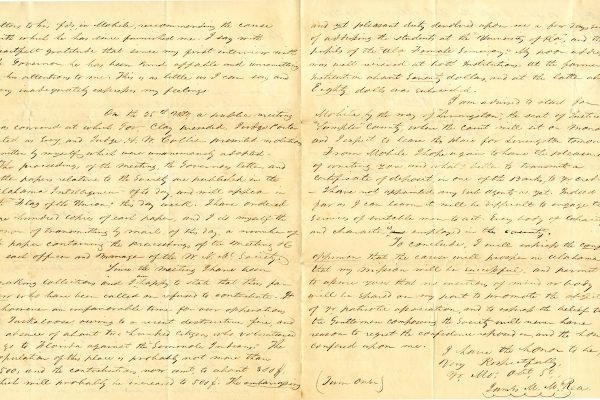 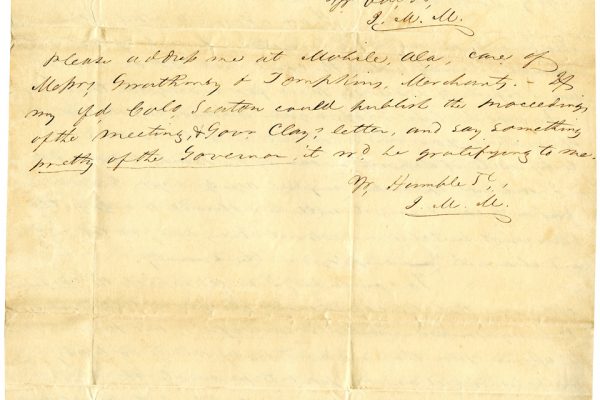 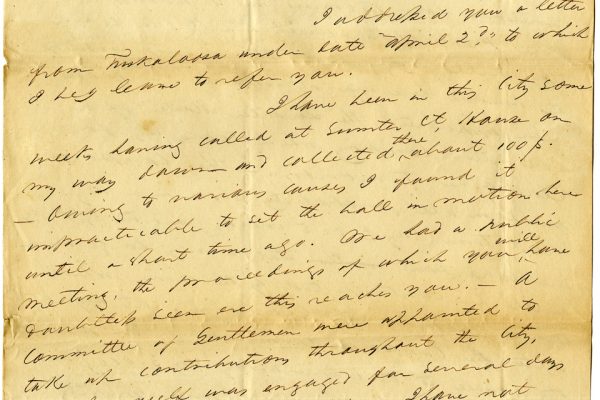 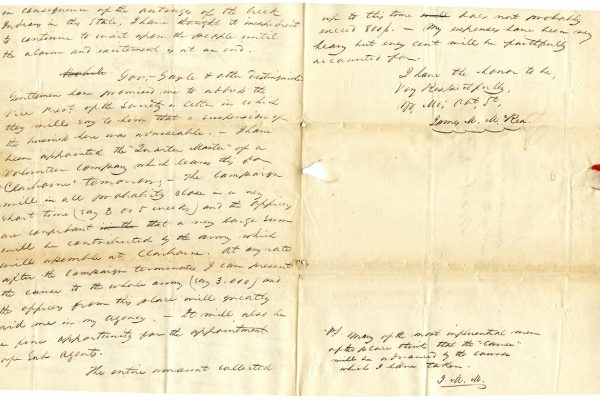 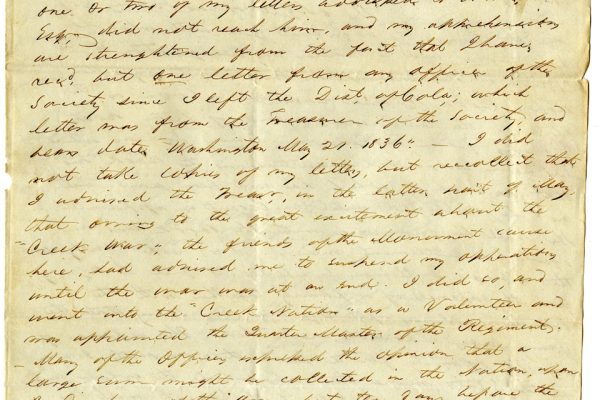 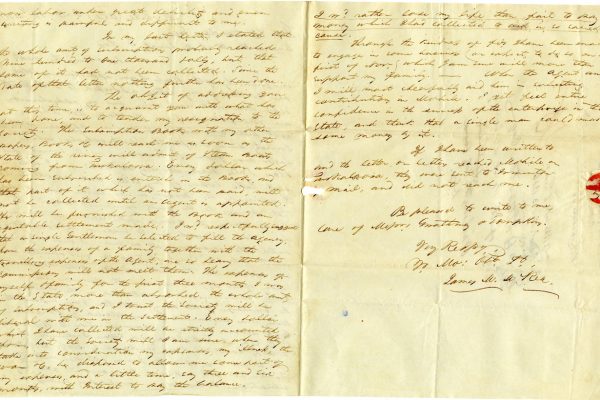 It would be several months before the Washington National Monument Society would hear from James McRea again. In a letter sent from Mobile on 15 October 1836, McRea relates his tale of woe as agent for the Society and tenders his resignation. The large sum of money forthcoming from the army never came to pass as McRea was dispatched to deliver a communication to Governor Clay and returned after the troops had been discharged, too late to collect any subscriptions or donations. He was then “attacked with the Fever.” McRea agreed to turn over his subscription book and other papers to a new agent sent by the Society. McRea respectfully suggested that a single gentleman be appointed this time as “the expenses of a family, together with the travelling expenses of the agent, are so heavy that the commission will not meet them.” The expenses of McRea and his family for the first three months they spent in Alabama “more than absorbed the whole amount of subscriptions.” McRea ended his communications with the Society requesting that they be lenient with the settlement and allow him three to six months to repay the balance: “I wld [sic] rather lose my life than fail to pay money which I had collected to aid in so sacred a cause.”

Despite his fervent vow to pay his debt, no money was ever forthcoming from McRea, and Samuel Harrison Smith, treasurer for the Society, was forced to bring suit in the Arlington County court. Since McRea was still in parts unknown in Alabama, Thomas K. Beale, the unfortunate cosigner to McRea’s bond, was sued for the recovery of $3,000 worth of contributions given in support for the monument. With a missing subscription book and only McRea’s letters as evidence, the court decided that Beale was only responsible for the repayment of $800, the final figure reported by McRea.

Samuel Harrison Smith vs. Thomas K. Beale, October 1838, is part of the Arlington County Judgments and Criminal Suits, 1783-1896, available for research at the Library of Virginia.