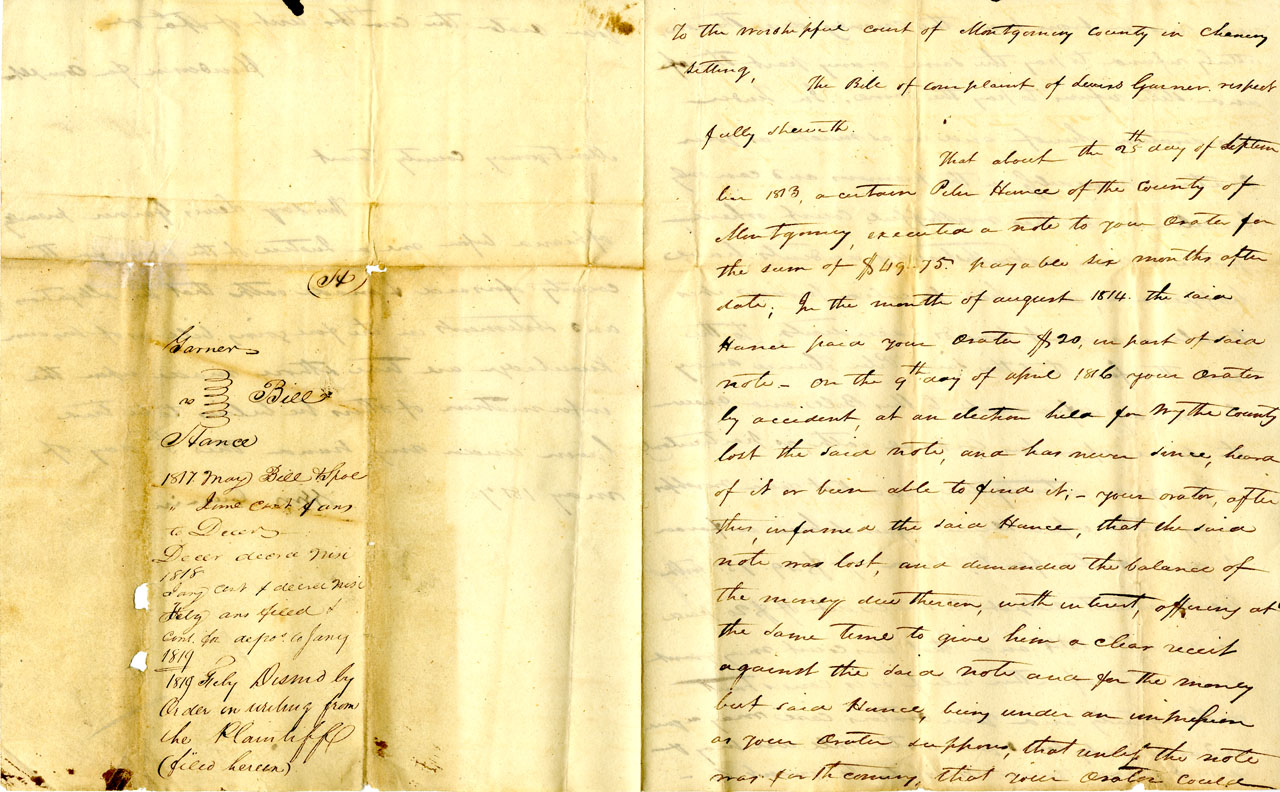 The varied experience of the African American residents of Montgomery County, Virginia, reveals itself in many documentary sources, but perhaps none as unexpected to some researchers as in the chancery causes.  As a preview of the upcoming workshop “Researching Your African American Ancestors: Genealogy to 1870” scheduled to be held at the Christiansburg Public Library on 19 July 2014, here follow five examples from the Montgomery County chancery causes highlighting different facets of African American life over the span of 100 years. 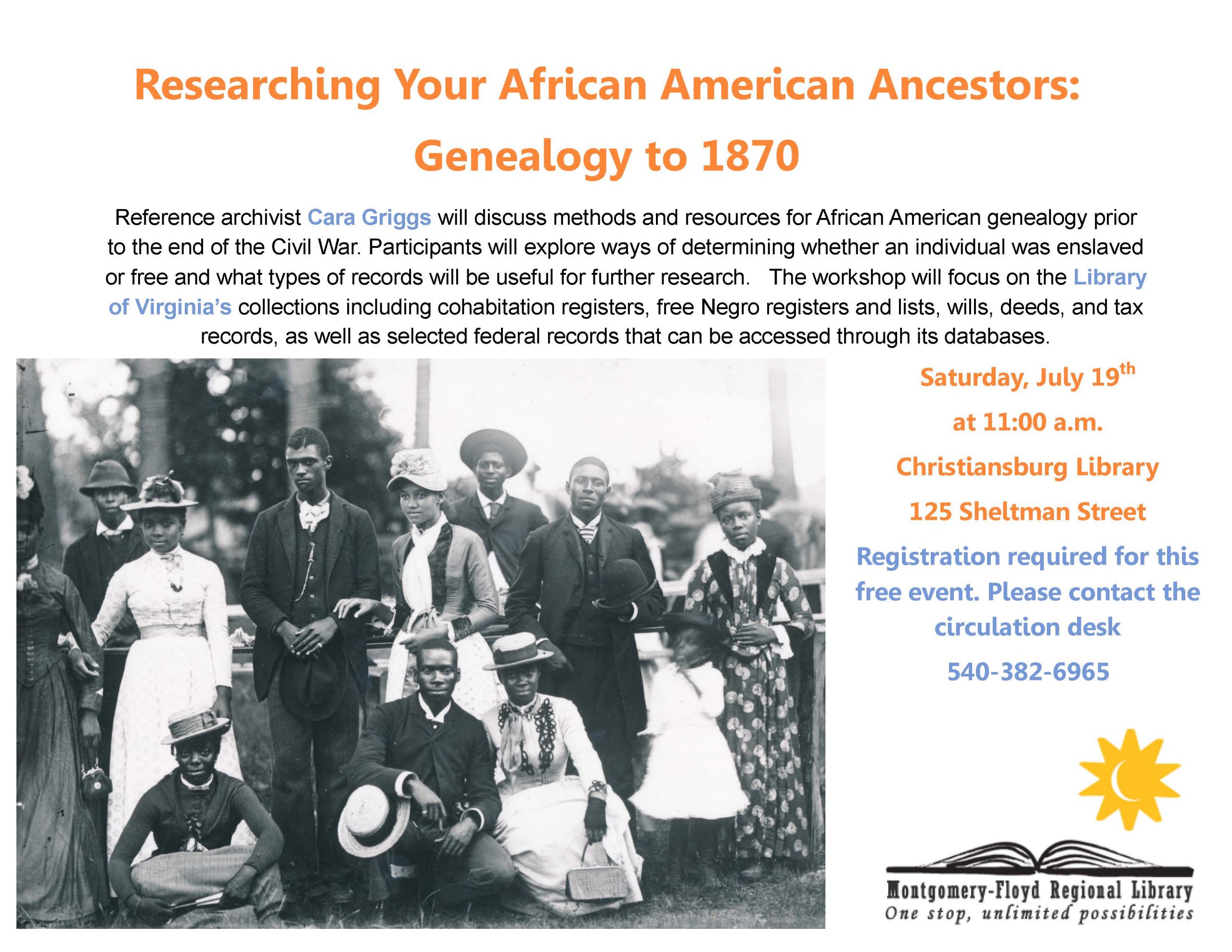 Whether as slaves or free persons of color, African Americans arrived in the western parts of Virginia as soon as the area began to be settled by easterners.  The earliest chancery suit with an identified free person is suit 1819-016, Lewis Garner vs. Peter Hance.  Peter Hance executed a bond to Garner, “a man of color” for $49.75 in 1813.  Garner then lost the note and Hance refused to honor the debt.  Garner filed suit against Hance to clarify the circumstances of the debt, the loss of the note, and to collect what he was owed.  The suit was dismissed at the request of the plaintiff in 1819.

Slaves appear throughout the chancery suits in many different situations, most commonly in an estate settlement suit when the slaves are divided among heirs or sold to pay debts. Chancery cause 1847-015, Ann Trigg, etc. by etc. vs.  Exr. of James Craig, concerns the settlement of the estate of James Craig, the grandfather of the infant plaintiffs.  Slaves are named in several of the documents including a copy of Craig’s will and a list of slaves sold. In the latter, the family relationships of the enslaved are given including Joseph and his wife Biddy, Fortune and his wife Fanny, and Tina and Frank (presumably her infant son).

Suit 1849-002, Joseph Deyerle, etc. vs. Admr. of Abner Early concerns a debt owed by Early to the heirs of Charles Deyerle that was contracted as a result of the lease of a saw mill. It also sneaks in a family relationship that anybody could understand: a younger man working to support his aged and disabled father.  The plaintiffs alleged that various slaves owned by Early could be used to pay off the debt owed, but some confusion existed as to whether Early owned the slaves or whether his brother or father’s estate had ownership. Various citizens were deposed to clarify the situation.  The depositions of Charles Thomas and Joseph Bott discuss several slaves including the “old blind creature” Arthur.  Thomas stated that he understood that all of the labor of the slave called Mingo “went to support old Arthur, who lived with him” and Bott testified that Arthur was Mingo’s father.

A divorce suit, 1895-003, Belle B. Hopkins vs. George W. Hopkins, was the result of George’s desertion of his wife for a student of his named Mary Cannady.  George had previously separated from Belle and wrote a letter of reconciliation from Chicago which also contained an interesting assertion on his part– being able to pass in that town as a white man.  After getting back together, George was teaching at Elliston where he soon transferred his affections to his student Mary.  Included as exhibits are two letters of George’s: the one from Chicago to Belle and then one to Mary revealing his feelings for her. 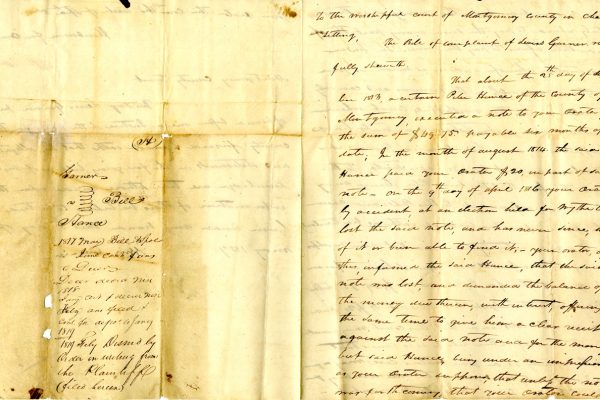 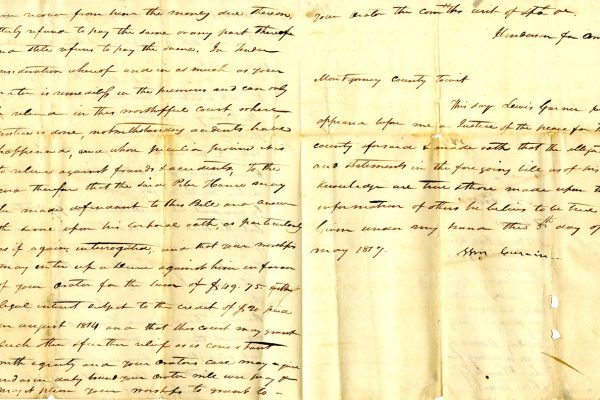 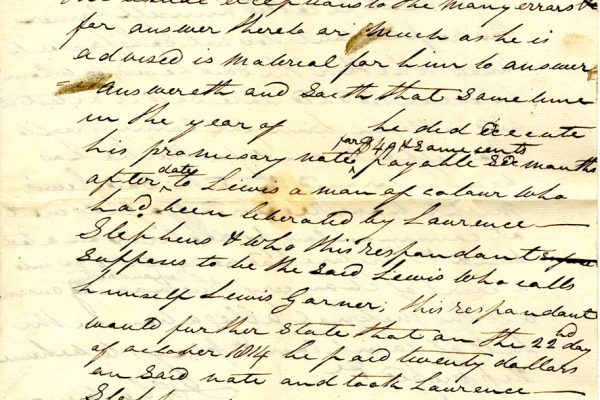 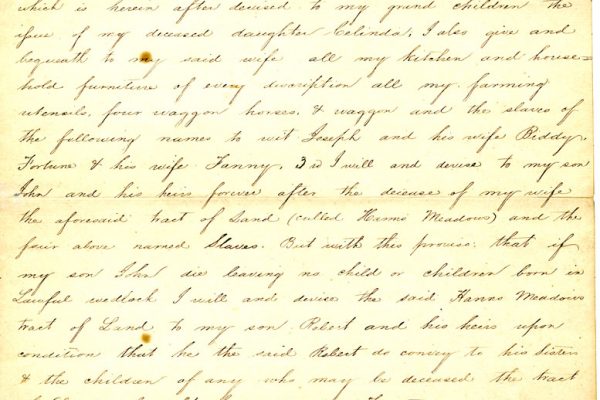 Will of James Craig 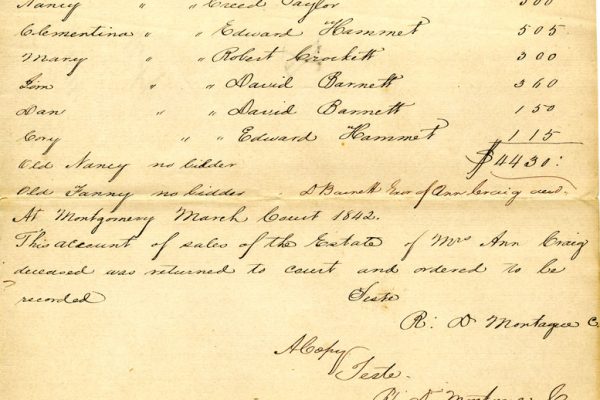 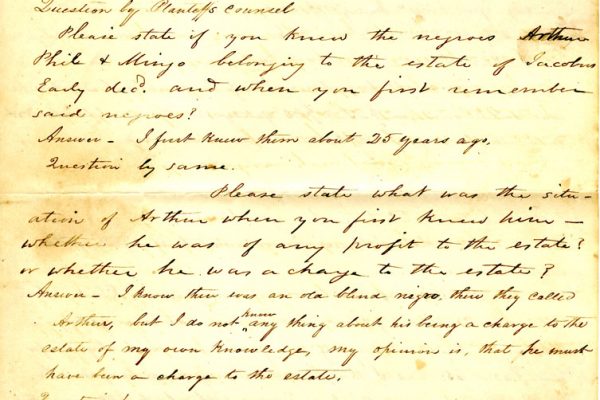 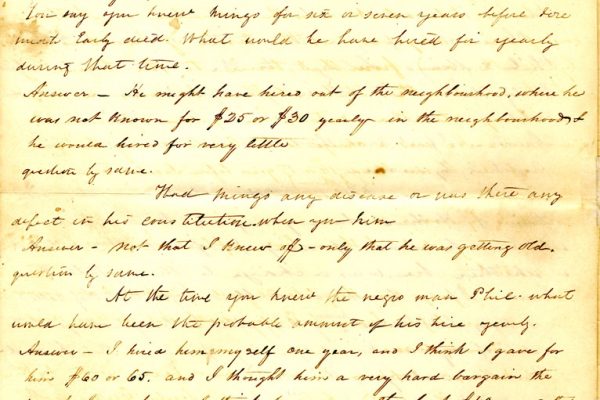 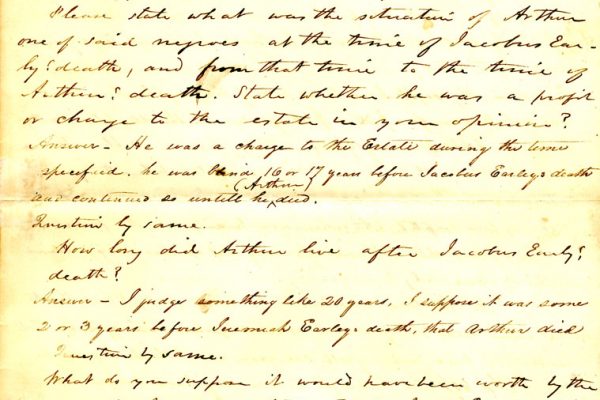 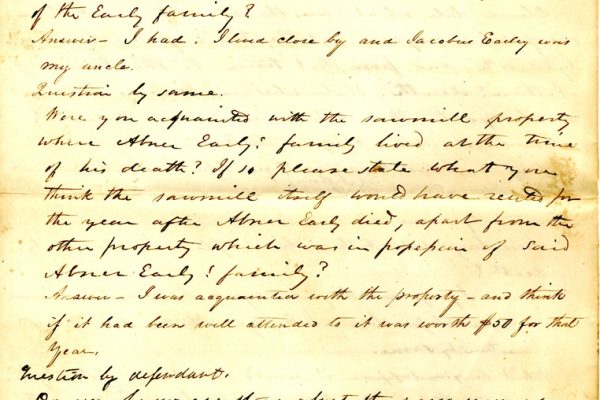 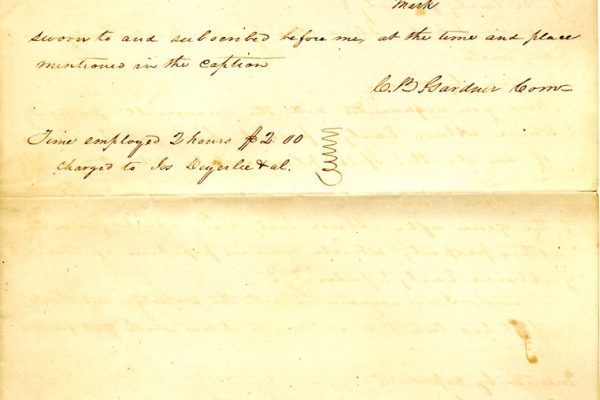 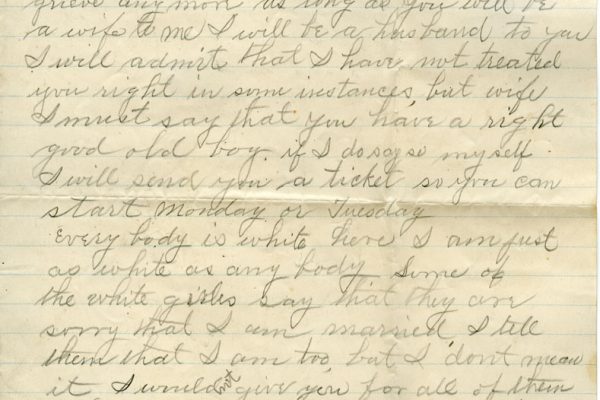 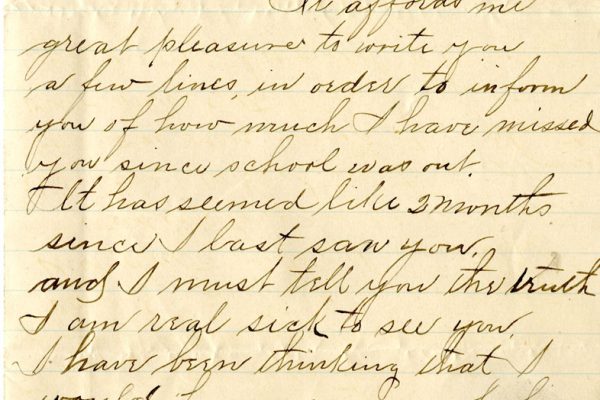 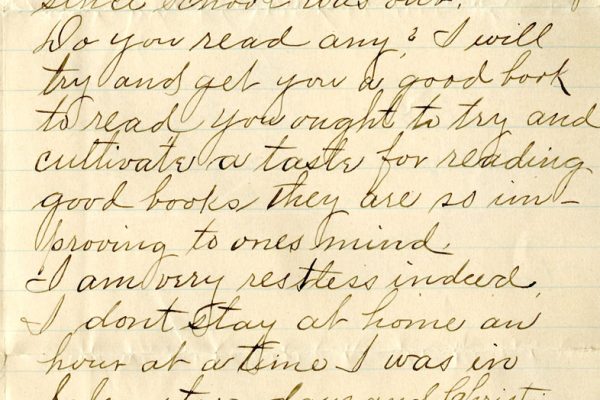 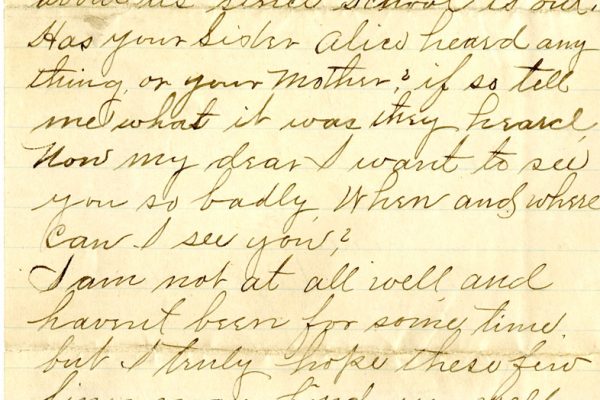 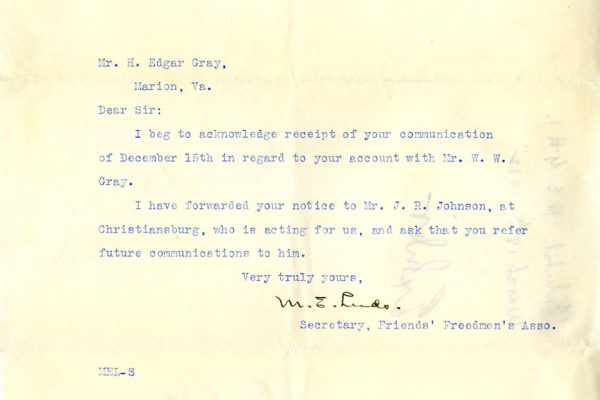 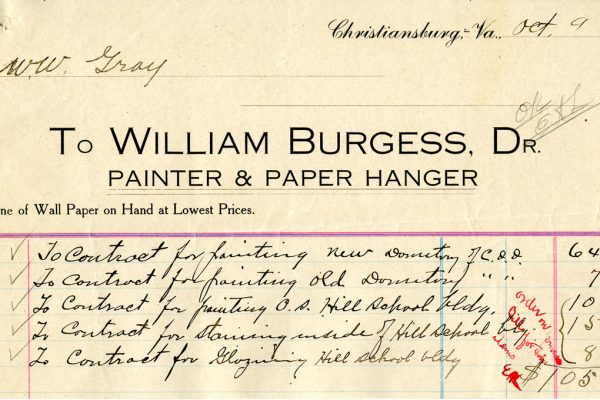 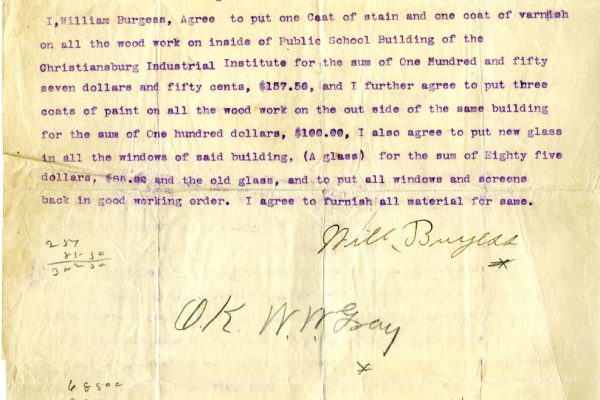 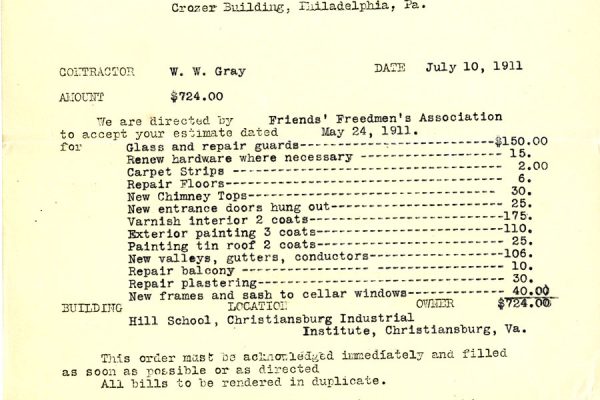 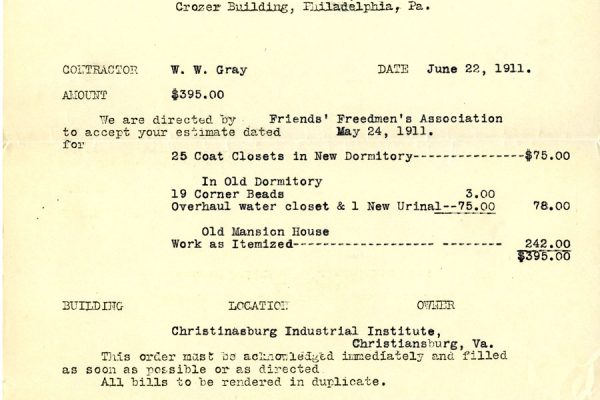 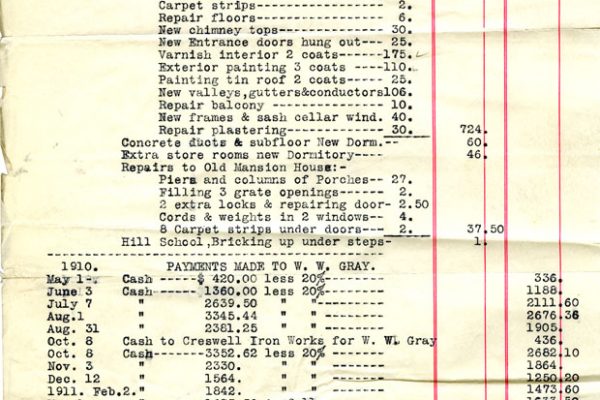 The final suit, 1912-031, J. S. Clingenpeel, etc. vs. W. W. Gray, etc., and Friends Freedmen’s Association vs. J. S. Clingenpeel, etc., was over debts incurred to various contractors responsible for construction projects at the Christiansburg Industrial Institute.  Founded in 1866, the Institute was brought into being by Charles S. Schaeffer, Brevet-Captain, U. S. Volunteers, as an agent of the Bureau of Refugees, Freedmen, and Abandoned Lands. Later, the school received the financial support of the Quaker Friends’ Freedmen’s Association.  Eventually the school transformed into a technical training school under the direction of Booker T. Washington.  A farm was purchased in 1905 and a campus of several buildings constructed.  The school was taken over by the Montgomery County School Board in 1934, converted to a high school in 1947, and finally closed in 1966 when the county schools integrated.  This suit does not contain much in the way of school history, but does include invoices that give information about the buildings and physical plant of the campus.

“Researching Your African American Ancestors: Genealogy to 1870” will be held at the Christiansburg Public Library in Montgomery County, Virginia, on 19 July 2014, from 11:00 AM-1:00 PM.  There is no cost for the workshop but registration is required.  Please call 540-382-6965 to register.

The processing and indexing of the Montgomery County chancery causes, 1777-1912, which is currently underway, has been funded by a two-year grant from the National Historical Publications and Records Commission (NHPRC) and the Library of Virginia’s innovative Circuit Court Records Preservation program (CCRP), which seeks to preserve the historic records of Virginia’s circuit courts. Additional information on this project can be found in an earlier blog post.