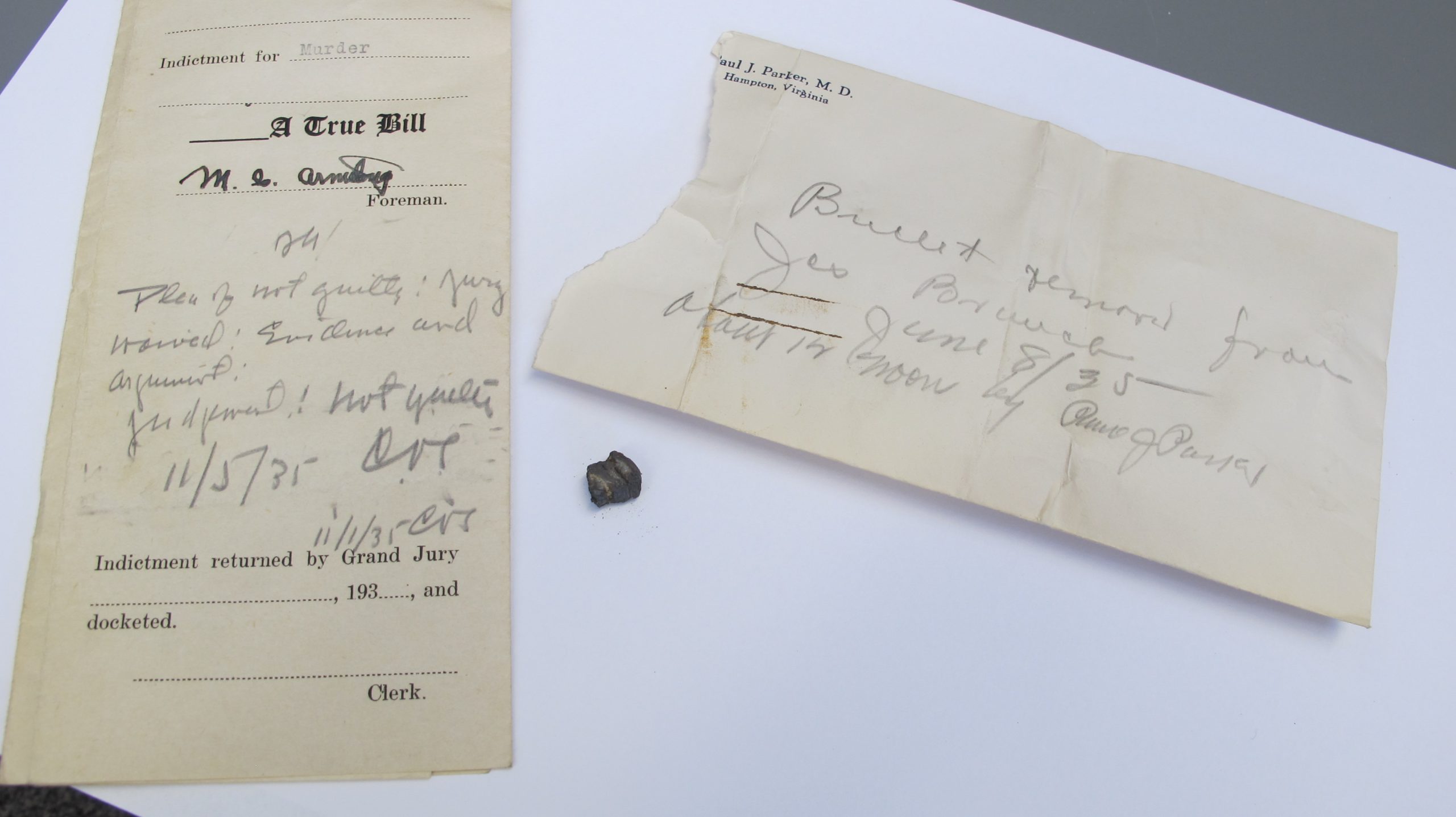 Editor’s Note: Jerry Hunt is a graduate history intern from Virginia Commonwealth University and is working on processing and indexing Depression-era coroner’s inquisitions from Elizabeth City County (City of Hampton).

Dr. Paul J. Parker ruled on 11 June 1935, that “James A. Branch came to his death of gun shot wound while gun was in hands of Lewis Smith at No 4 Curry St Phoebus Va [sic].” However, five months later he modified his ruling when he wrote, “James Branch came to his death by a gun shot wound just below the lobe of the left ear, this occurred at the corner of Curry and County Streets, Phoebus, Va.” Lack of an explanation for this momentous change amplified the intrigue and portended a unique case in the otherwise straightforward files of Dr. Parker.

As the medical examiner for Elizabeth City County, later the City of Hampton, Dr. Parker was tasked with conducting coroner’s inquiries into any sudden, violent, unnatural, or suspicious deaths, or any death which occurred without medical attendance. These inquiries included conducting depositions to determine how the victim came to his or her death and, if so warranted, forwarding his findings to the Elizabeth City County Circuit Court for grand jury consideration.

In the case of James Branch, Dr. Parker, after deposing eleven witnesses, found that Lewis Smith had held the gun that fired the fatal shot. Included in this group of witnesses was Mr. Smith, whom Dr. Parker advised had been charged with murder. Interestingly Dr. Parker then did what we would now refer to as “Mirandizing” Smith, even though this process was not formalized for another 31 years. Smith stated that he did not care to testify, which ended his deposition.

Dr. Parker forwarded the depositions to the circuit court and the grand jury during the October 1935 term, finding that Lewis Smith “feloniously did kill and murder one James Branch.” According to the indictment Smith pled not guilty and waived a jury trial, to stand before Judge C. Vernon Spratley. The Newport News Daily Press reported that Smith “admitted he was drunk the night of the killing…he believed Branch was armed with a razor and hit at Branch with a pistol to ward off an attack. Smith claimed he did not know he had shot Branch and that it was not until the following day that he was told he had fired the fatal shot. He testified he and Branch had been quarreling but claimed he had no enmity against him.” Judge Spratley ruled on October 29 that Smith was guilty of voluntary manslaughter and sentenced him to four years in the state penitentiary. However, he deferred the sentence for three days at the request of defense counsel to permit the presentation of new evidence.

None of the depositions mentioned a razor or any weapon belonging to Branch. Also, Dr. Parker was not specifically tasked with cataloguing the victim’s clothes and their contents as part of his examination, only the body, therefore he was not looking for any weapon. It was thus left to Smith’s keen and incisive lawyer, J. Thomas Newsome, to seize upon Smith’s mention of a razor. Three days later Newsome put on the witness stand two undertaker’s assistants who testified that they had taken an opened razor from Branch’s pocket during their preparation of the body, thus providing the basis for Smith’s self-defense claim.

Upon further examination of this new evidence, with the fact that the razor was still open when found in the pocket of the victim proving to be crucial, Judge Spratley released Smith and proclaimed him innocent of all charges. Now we know why Dr. Parker changed his ruling, but his inquest only provided the first clues. It took research of five months’ worth of newspapers on microfilm and examination of the Elizabeth City County Circuit Court records for 1935 in order to flesh out the skeletal outline (pun intended) provided by Dr. Parker’s work.

This is indicative of how local records can work together to tell a complete story but it also points to the importance of getting these records processed so that they can be preserved. Preservation allows their existence to become known, their location to be publicized, and their substance to be available for all researchers.

Most interestingly, and the most exciting moment of the entire process, was the discovery of a bullet unassumingly folded within an envelope and tucked inside the indictment returned against Lewis Smith. It was the fatal round removed by Dr. Parker from the body of James Branch during his autopsy. Finding spent ammunition among the historic papers one is processing is a most unexpected occurrence, but you never know what you’ll find in local records!