”No man ever left behind him a character more venerated than George Wythe. His virtue was of the purest tint; his integrity inflexible, and his justice exact; of warm patriotism, and, devoted as he was to liberty, and the natural and equal rights of man, he might truly be called the Cato of his country.

That’s Thomas Jefferson, not only a former student but trusted friend, and the statement most often quoted in biographical accounts, long or short, of Wythe’s life.

The following observation speaks to the maintenance of the body in support of that spirit so deservedly praised and is from William Munford, one of the last students Wythe (pronounced “with”) would mentor.  It provides a better caption for the image above, 5th and Grace in downtown Richmond, as it fits the person into a space, bland though it may appear here in the historical present.

“”Old as he is, his habit is, every morning, winter and summer, to rise before the sun, go to the well in the yard, draw several buckets of water, and fill the reservoir for his shower bath, and then, drawing the cord, let the water fall over him in a glorious shower. Many a time have I heard him catching his breath and almost shouting with the shock. When he entered the breakfast room his face would be in a glow, and all his nerves were fully braced.”

No one’s nerves, however, could be braced for what would follow Wythe’s daily ritual the morning of May 25, 1806, almost 15 years after Wythe’s departure from Williamsburg to Richmond to preside over the Capital’s Chancery Court. That an 81 year old revered Founding Father (participant in the Second Continental Congress, signer of the Declaration of Independence, the country’s first law professor, classics scholar-a very abbreviated list) would discover his demise at the hand of his live-in grand-nephew by the preparation of poisoned coffee  still startles, even at this great distance.

A brief account of the trial of the accused, George Wythe Sweeney, and mention of a key factor in his acquittal, also appeared in the Enquirer later that year: 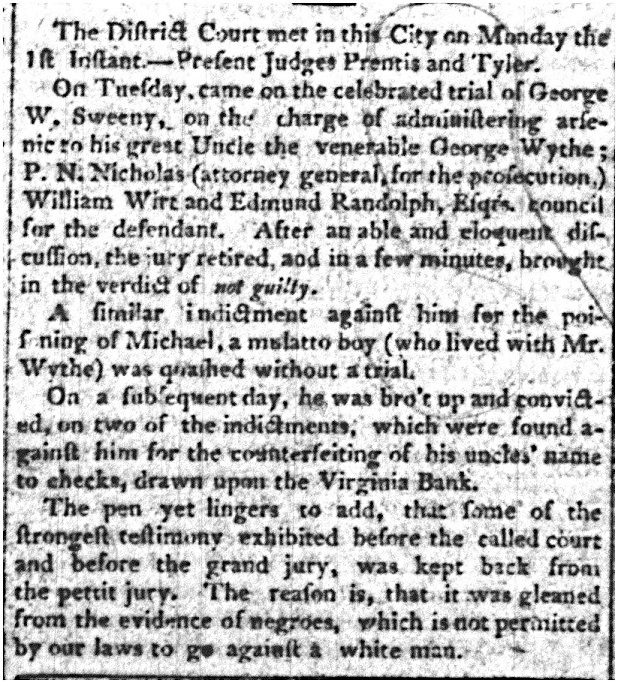 In these early years of the American press, it was all, so to speak, chamber music. The full symphonic tabloid score (big brassy fonts, crashing photo-cymbals etc…) of greater volume produced by greater competition pursuing greater circulation and greater profits was only in the earliest stages of development. 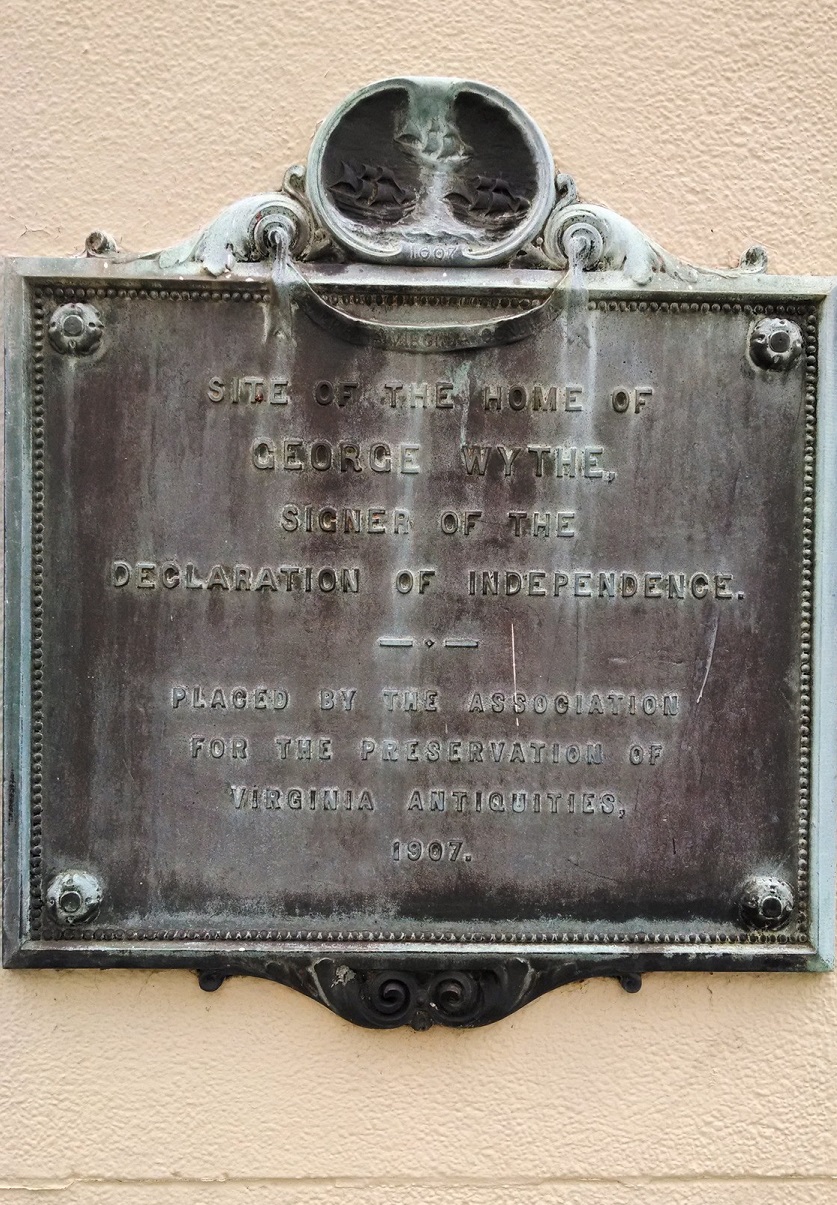 A 2009 publication, I Am Murdered – said to be Wythe’s declaration during his painful decline- catches up with that missed sensationalist opportunity. It is a curious story.  Plus, you’ll learn plenty about the uses of arsenic, both fair and foul. The Wikipedia entry on Wythe is quite thorough with details on the murder beneath the heading “Death Scandal”.  And footnote #84-most impressive.  Well done, someone. The Colonial Williamsburg website features a more concise and managed summing up of Wythe with emphasis on his close ties to the former Capital. I also recommend the Library of Virginia’s own publication, Virginia Cavalcade, and an article from the issue of Winter 1963-64, “Was George Wythe Murdered?” by Calvin Jarrett.  Regrettably, the best biography of Wythe, American Aristides by Imogene E. Brown, is out of print, hard to find and silly expensive on-line.

Though Wythe’s contribution to early American history is certainly considerable, the newspaper representation is slight.  You’ve just looked at most of it.

My reading into Wythe’s life earlier this summer happened to coincide with the anniversary of his death and this added somewhat to its lure as a blog entry, but not enough, and so it faded from mind.  Until revived, that is, by a remark a few weeks ago from fellow Projecteer Silver Persinger concerning this small greenish object discarded from memory and easily overlooked.

Since this is a newspaper blog, it serves my purpose to think of a plaque inscription as a headline everlasting, implicitly insisting: “Consider this life, consider this time.”  So my question is, should such an object commemorating a life of such vitality and value to America be attached to an empty retail phantom, a building without any architectural distinction (though the Guggenheimesque corner curvature is a little cute) or economic pulse?  With the recent shuttering of the restaurant 525 at The Berry Burk (now charting number one on the list of Richmond Cautionary Tales for restaurant entrepreneurs and investors) the 1st floor of the entire 500 block of East Grace is vacant.

Only the natural charm of the corridor (the narrow street, the trees, some recent residential occupancy within the old Miller & Rhoades-I guess someone is up there) preserves this block from a deeper urban gloom. Perhaps the plaque could move around the corner to the former John Marshall Hotel, now converted residential after a 70 million dollar renovation.

Chief Justice Marshall, after all, was another student of Wythe’s, and the two are paired in the name of William & Mary’s Marshall-Wythe law school.  By a move of only half a block, it could still be located on Wythe’s original property—a site allowing an unimpeded view south across the James and east over a city still huddled about Shockoe Valley.  In 1806, it bears remembrance, the population of Richmond was just 6,000, if that.

Or perhaps George Wythe might be transferred from plaque to a more visible highway marker.  An editor whose newspaper the Project has been proud to archive and champion recently appeared near 3rd and Marshall (greetings once more, Judge Marshall) about 5 blocks west from our location. 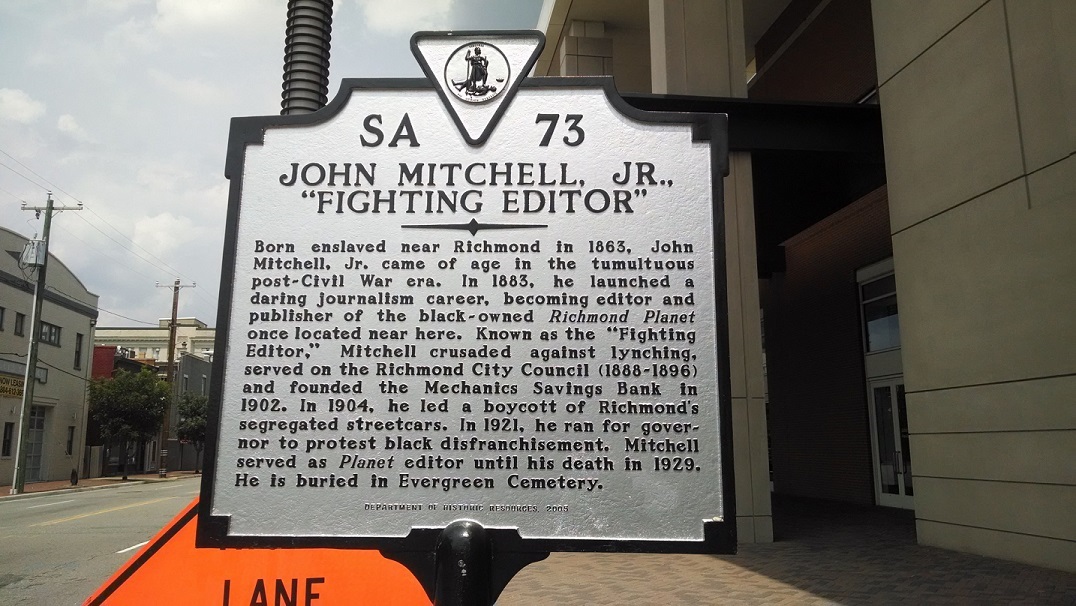