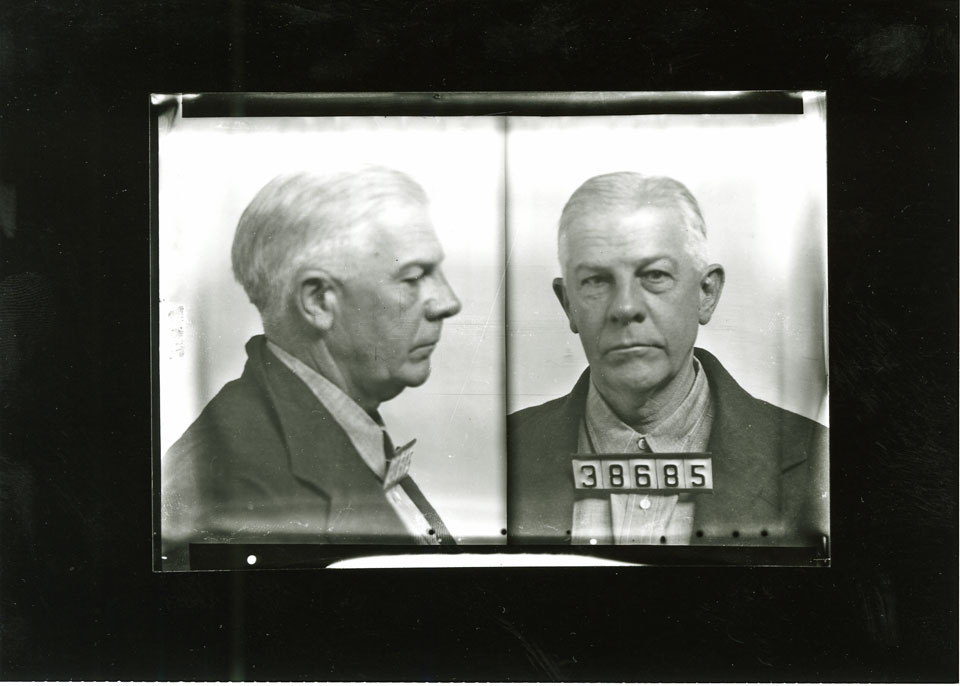 This is the latest entry in a series of posts highlighting inmate photographs in the records of the Virginia Penitentiary.  Dr. Robert S. Fitzgerald, the subject of this week’s post, was tried for performing abortions on three women between 1927 and 1937.  All three died as a result of Fitzgerald’s “illegal operation.”

Melva Victoria Royal was in trouble.  The unmarried 18-year-old North Carolinian King’s College student learned in the fall of 1927 that she was pregnant. 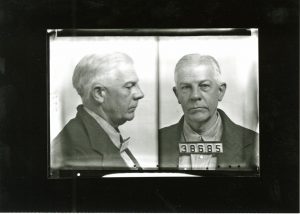 Melva wanted to terminate her pregnancy but didn’t know how.  A North Carolina physician provided James Royal, Melva’s father, with a name of someone who could perform the operation:  Dr. Robert S. Fitzgerald of Richmond, Virginia.  On 10 October, Melva and her father arrived in Richmond and made an appointment to see Dr. Fitzgerald.  After examining Melva, Dr. Fitzgerald, according to James Royal’s later court testimony, said he would not take the case for less than $200.  Royal obtained the money from a local bank, returned to Fitzgerald’s office at 6 p.m., and paid him.  Fitzgerald told James Royal take a walk for about half an hour.  When he returned, Melva was asleep.  At 8:30 p.m. the Royals  took a cab to their place of lodging.  Melva complained that she did not feel well.  At 9 a.m. on 11 October, Royal entered his daughter’s room and found her hemorrhaging.  He immediately called Fitzgerald, who ordered the patient taken to Hygeia Hospital and Sanatorium.  Dr. Fitzgerald did not accompany them to the hospital.  Melva was dead on arrival. 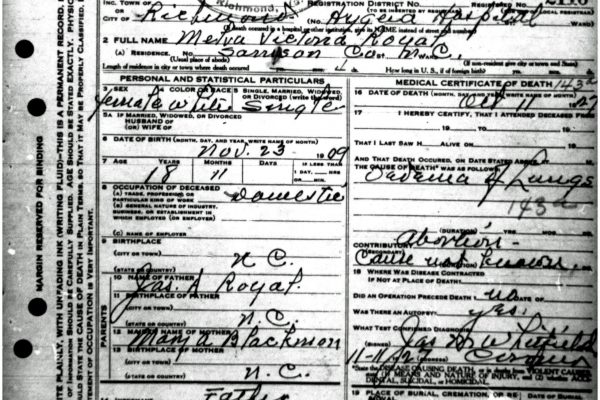 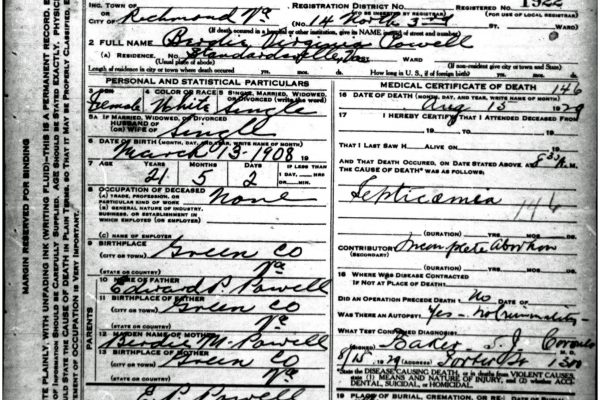 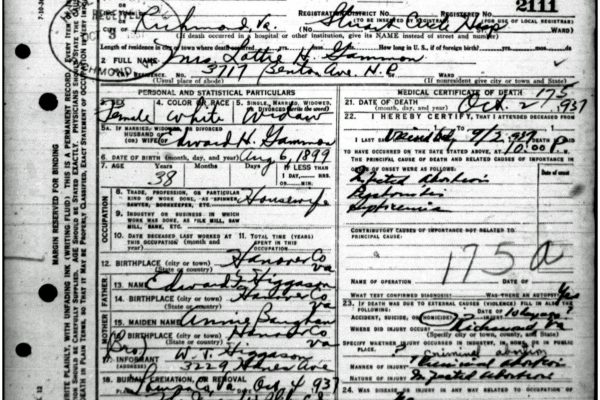 Richmond Police arrested Dr. Fitzgerald on 12 October on suspicion of murder.  The grand jury indicted Fitzgerald in November for second degree murder and his trial date was set for 30 January 1928.  Fitzgerald pleaded not guilty.  Richmond Coroner James M. Whitefield testified that death was caused by edema of the lungs due to an infection caused by the abortion.  Testifying on his own behalf, Fitzgerald denied that he performed an illegal operation.  His defense, reported the Richmond News-Leader, was “that his treatment was necessary to save the life of the girl, and that the resulting complication that caused death was unavoidable.”   After nearly six hours of deliberation, the jurors were deadlocked and could not reach a verdict.  A second trial was held in late February with a similar outcome.  Fitzgerald was not tried again, at least not for the death of Melva Royal.

Twenty-one-year-old Bertie Virginia Powell of Stanardsville, Virginia, arrived at Dr. Fitzgerald’s East Franklin Street office on 15 August 1929.  Bertie, accompanied by her sister Anna, came to Fitzgerald for an abortion.  The procedure took about 15 minutes.  “When she came out [of Fitzgerald’s office],” Anna later testified, “she looked all right, except that her eyes were red from crying.”  Bertie was not all right; she died on 15 August, according to Acting Coroner Dr. Sydney J. Baker, “from the effects of an abortion said to have been performed by Dr. R.S. Fitzgerald.”  After several delays, Fitzgerald went on trial 29 April 1930 on the charge of performing an illegal operation.  The prosecution’s main witnesses were Dr. Baker and Anna Powell.  Fitzgerald testified in his own defense and denied performing an illegal abortion.  He said he only took Bertie’s temperature and blood pressure.  The jury did not believe him.  After deliberating a little over one hour, they found Fitzgerald guilty.  He was sentenced to three years in the Virginia Penitentiary.  Fitzgerald’s attorney’s immediately asked trial Judge John L. Ingram to set aside the verdict in part over the admissibility of testimony of Anna Powell related to statements made to her by Bertie.  Judge Ingram concurred with defense counsel and set aside the verdict and ordered a new trial on 30 June.  During the second trial, the defense introduced an autopsy report by Dr. Baker that unlike the report submitted into evidence at Fitzgerald’s previous trial “declared that no evidence of [a] criminal operation had been found.”  This document probably created enough reasonable doubt; the trial ended with a hung jury.  A third trial never took place.  After several delays, all charges against Dr. Fitzgerald were dropped on 26 March 1931.

On 6 October 1937, Richmond police received a call from a physician at Stuart Circle Hospital that a woman had died there on 2 October under strange circumstances.  After a brief investigation, Dr. Fitzgerald was arrested for the murder of 38-year-old Lottie H. Gammon.  Fitzgerald’s trial was delayed several times due to the absence of a prosecution witness.  When the trial began on 2 December, it was unlike any of Fitzgerald’s previous trials.  Fitzgerald waived a jury trial and pleaded not guilty.  The prosecution only called two witnesses.  Fitzgerald did not testify.  Judge Ingram found him guilty and sentenced him to three years in the penitentiary.  The entire trial lasted 30 minutes. 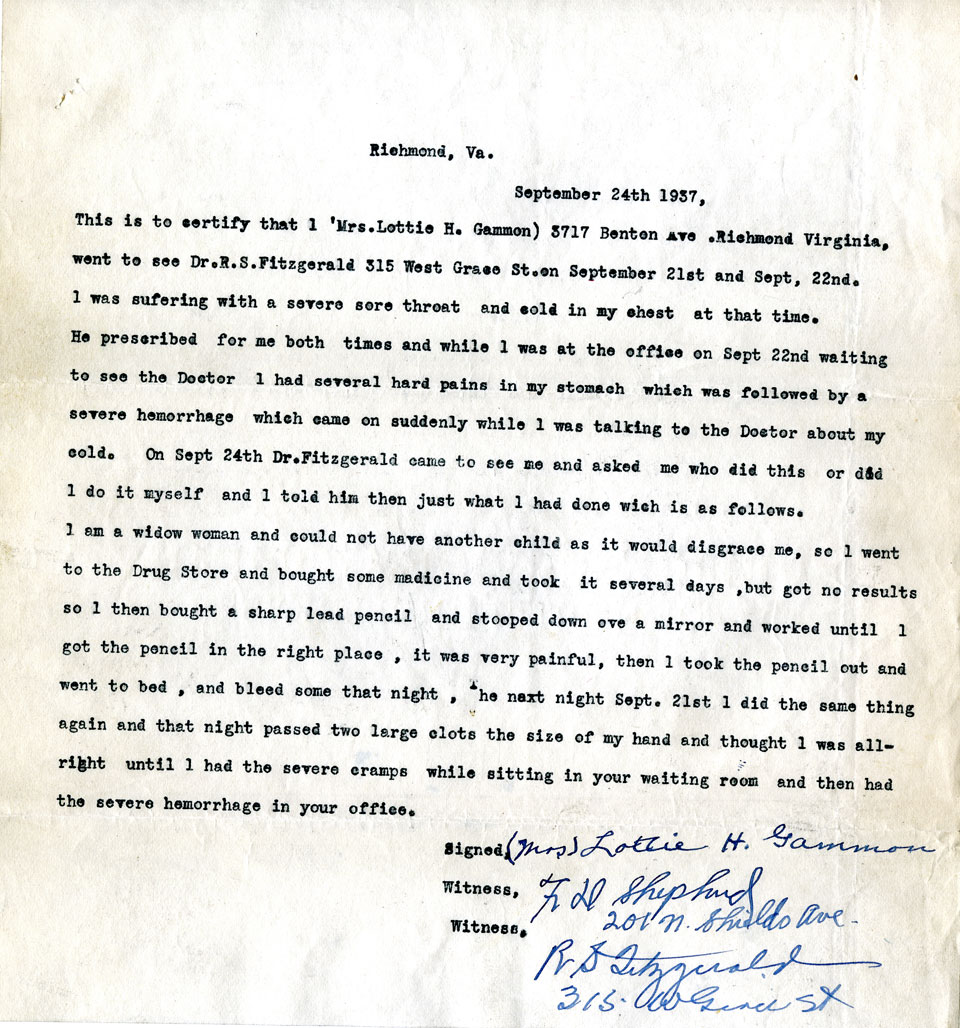 Why was this trial different?  A remarkable 11 March 1938 letter written by Juliette Fitzgerald, Robert’s wife, to Governor James H. Price helps answer the question.  Dr. Fitzgerald had a signed statement by Lottie Gammon describing her medical condition.  “I understand that this purported paper was witnessed and signed by a notary public,” Juliette wrote, “but on advice of Counsel Leigh Bremmer, the notary and signature was cut off.”  On the day of Fitzgerald’s trial, F.D. Shepherd, a witness to Gammon’s statement, “was under the weather and could not appear” to testify.  “That was when the defendant,” Juliette continued, “was advised by counsel to leave it to the judge in the absence of his witness.”  Juliette believed that the case should have been continued so that Shepherd could testify and asked Price to pardon her husband.  Gammon’s statement, dated 24 September 1937, was enclosed with Juliette’s letter to Governor Price.

In her statement, Gammon describes her visits to Dr. Fitzgerald’s office and she then goes on to describe the manner in which she performed an abortion on herself.  [Warning:  Gannon’s statement (image above) is extremely graphic].

Dr. Fitzgerald wrote Governor Price from the State Farm on 27 June 1938.  Curiously, he made no mention of his wife’s letter or Gammon’s signed statement.  In fact, he tacitly acknowledges his guilt.  He expressed “his regret of all the incidents which brought about his conviction” and requested the “opportunity to rehabilitate myself and begin life anew, and I assure you that a situation will never occur again.”  Fitzgerald stated that if pardoned, he would practice medicine in Florida since the Virginia Board of Medical Examiners revoked his medical license in June 1938.  “I beg of you to believe me when I say that I am not a man of criminal inclinations,” Fitzgerald concluded, “and I therefore earnestly request that you give me the opportunity to rehabilitate myself in another state.” 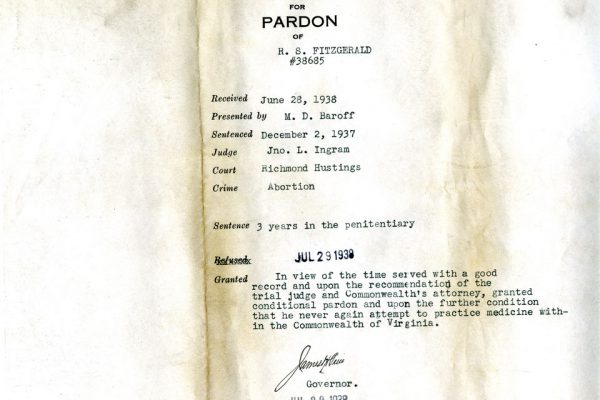 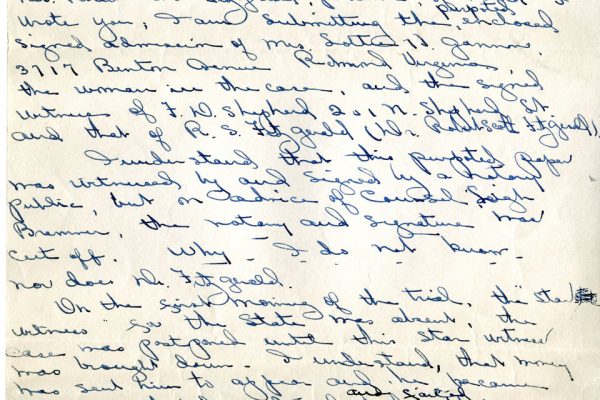 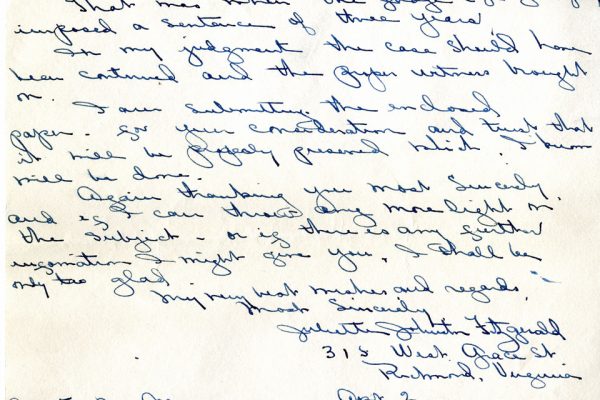 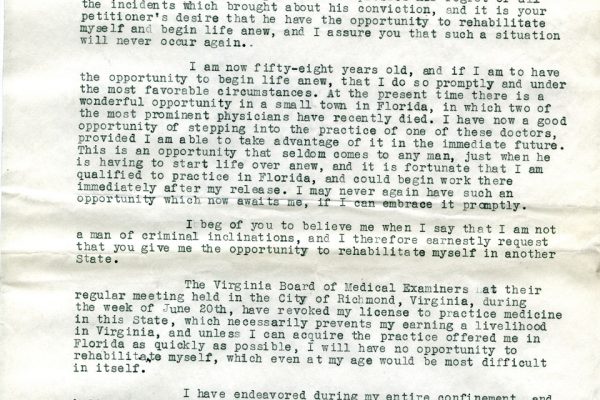 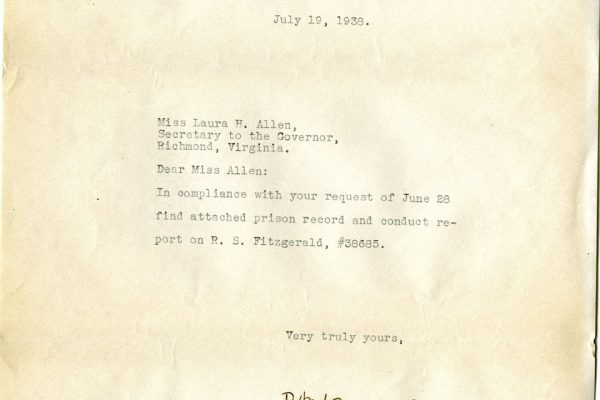 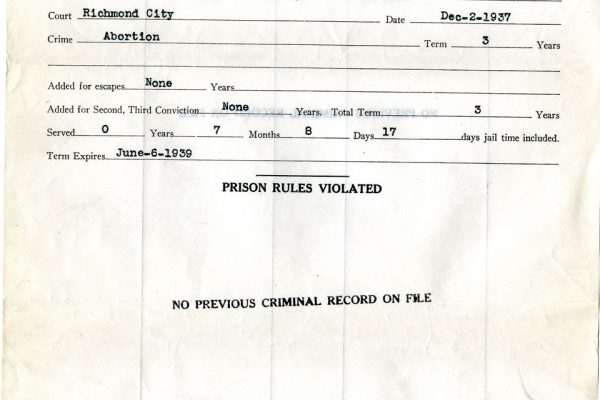 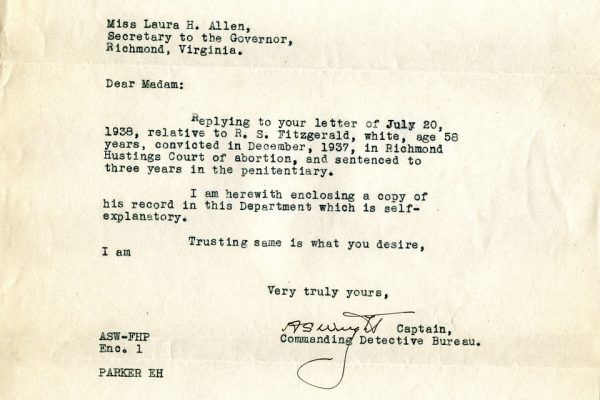 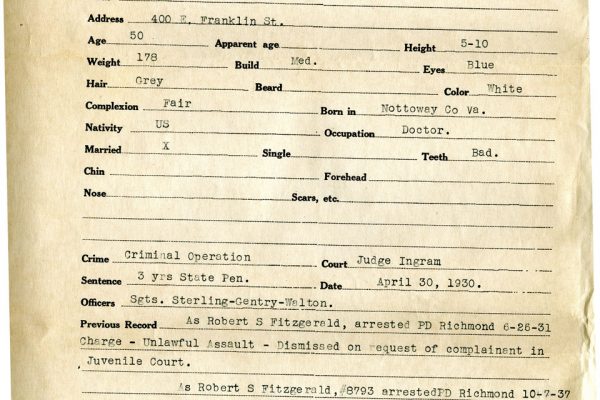 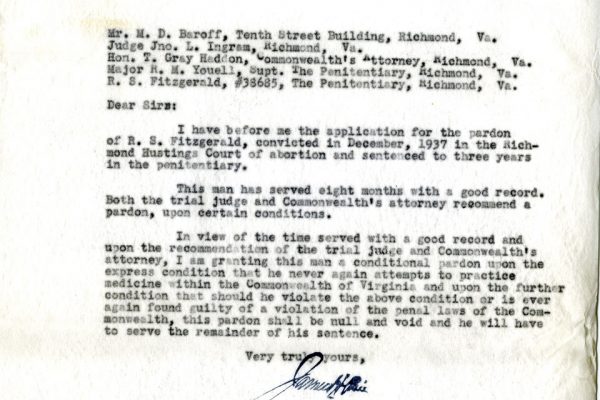 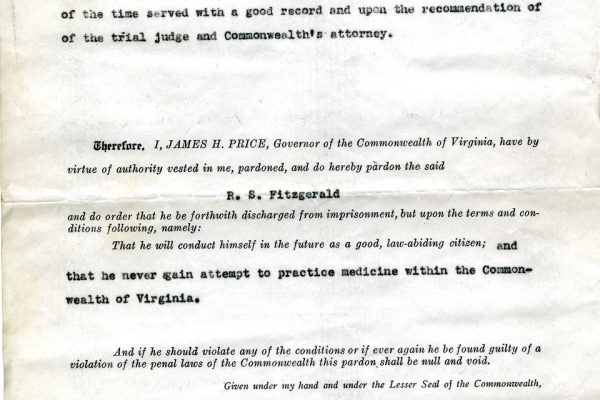 Fitzgerald’s letter, along with the recommendation of the trial judge and Commonwealth’s attorney, persuaded Governor Price to pardon him on 29 July 1938.  In his letter explaining his decision, Price wrote that “I am granting this man a conditional pardon upon the express condition that he never again attempts to practice medicine within the Commonwealth of Virginia.”  Should Fitzgerald violate this condition or be convicted of a crime in Virginia, his pardon would be voided and he would have to serve the remainder of his sentence.

After his release, Fitzgerald practiced medicine in West Virginia.  In 1944, Governor Colgate Darden restored Fitzgerald’s right to vote (lost when he was convicted of a felony).  His medical license in Virginia was reinstated sometime thereafter.  Dr. Fitzgerald moved to Martinsville and died in 1962. 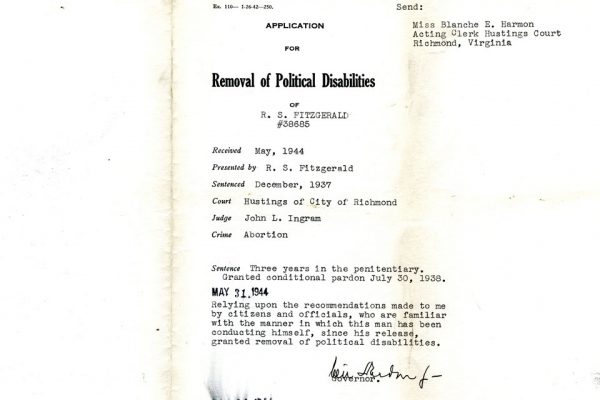 Jacket of Application for Removal 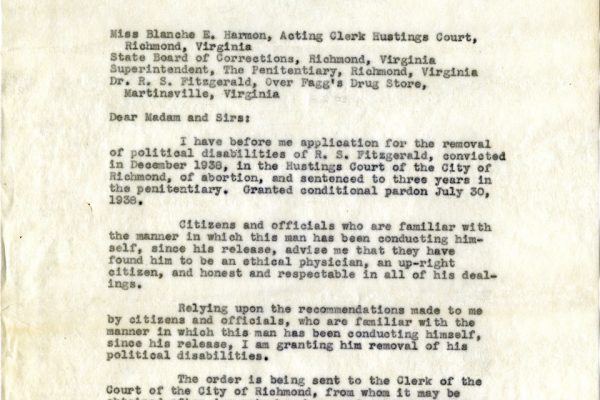