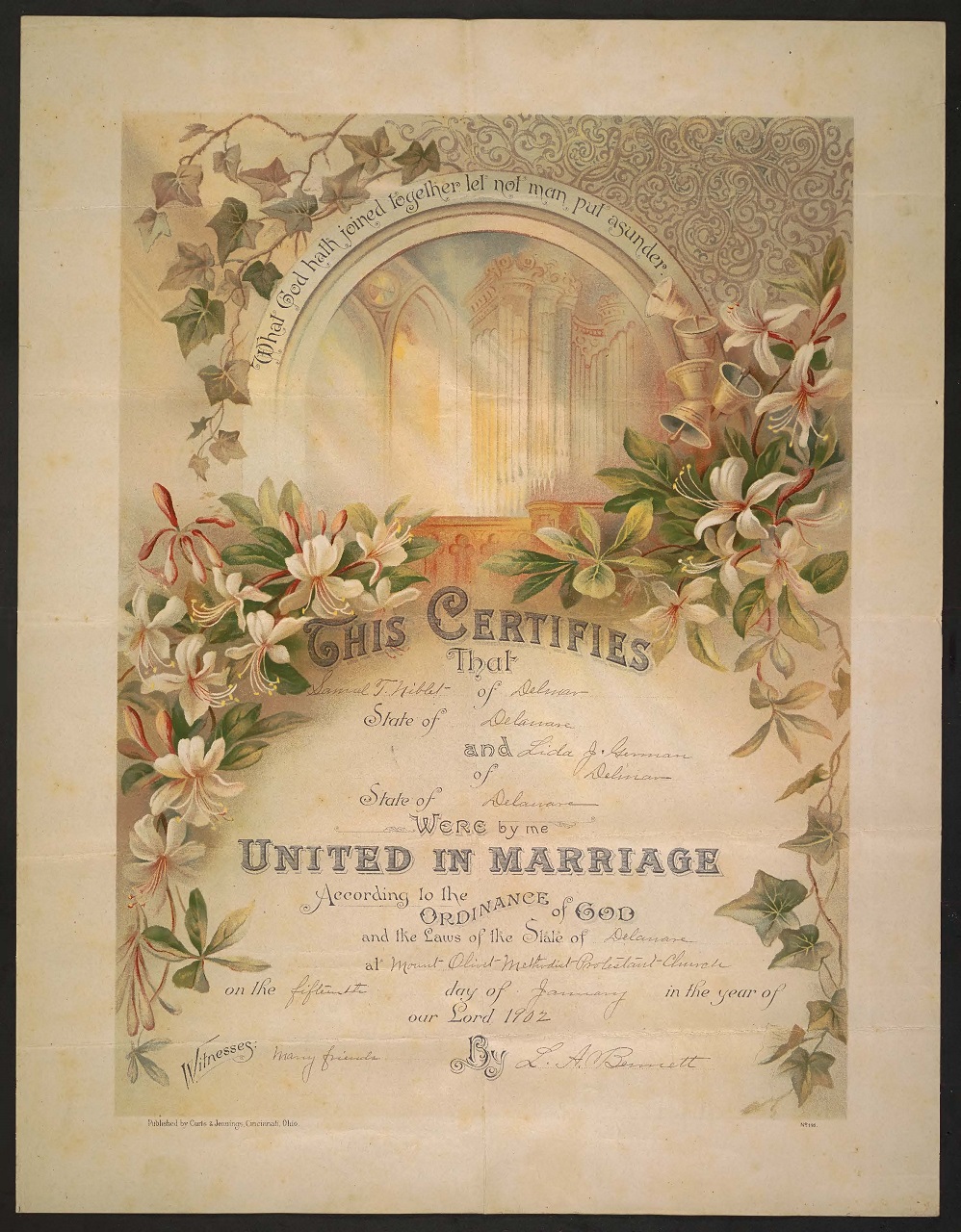 The Library of Virginia is pleased to announce that digital images for Elizabeth City County (Va.) Chancery Causes, 1747-1913, are now available online through the Chancery Records Index on LVA’s Virginia Memory website.  Traditional wisdom has always held that not many pre-1865 chancery suits managed to survive the burnings of Elizabeth City County (now the City of Hampton) in the Revolutionary War, War of 1812, Civil War, and the great 1865 Richmond evacuation fire that consumed many locality records sent to the capital for safekeeping.  While not all of the records that should have existed still survive, it is fortunate that 366 suits from Elizabeth City County dating 1865 and prior were discovered as part of this processing project allowing for a richer portrait of the locality to emerge.

The earliest surviving suit is that of John Hunt and wife vs. William Hunter, 1747-001, and concerns the estate of William Hunter.  Hunt’s wife was one of Hunter’s children and as such the couple sued for their portion of her father’s estate, which consisted of four slaves: Moll, Diana, Jemmie, and an unnamed child.  The suit, which commenced in 1744, was continued for several years until it was finally sent on to the General Court in Richmond in 1747. 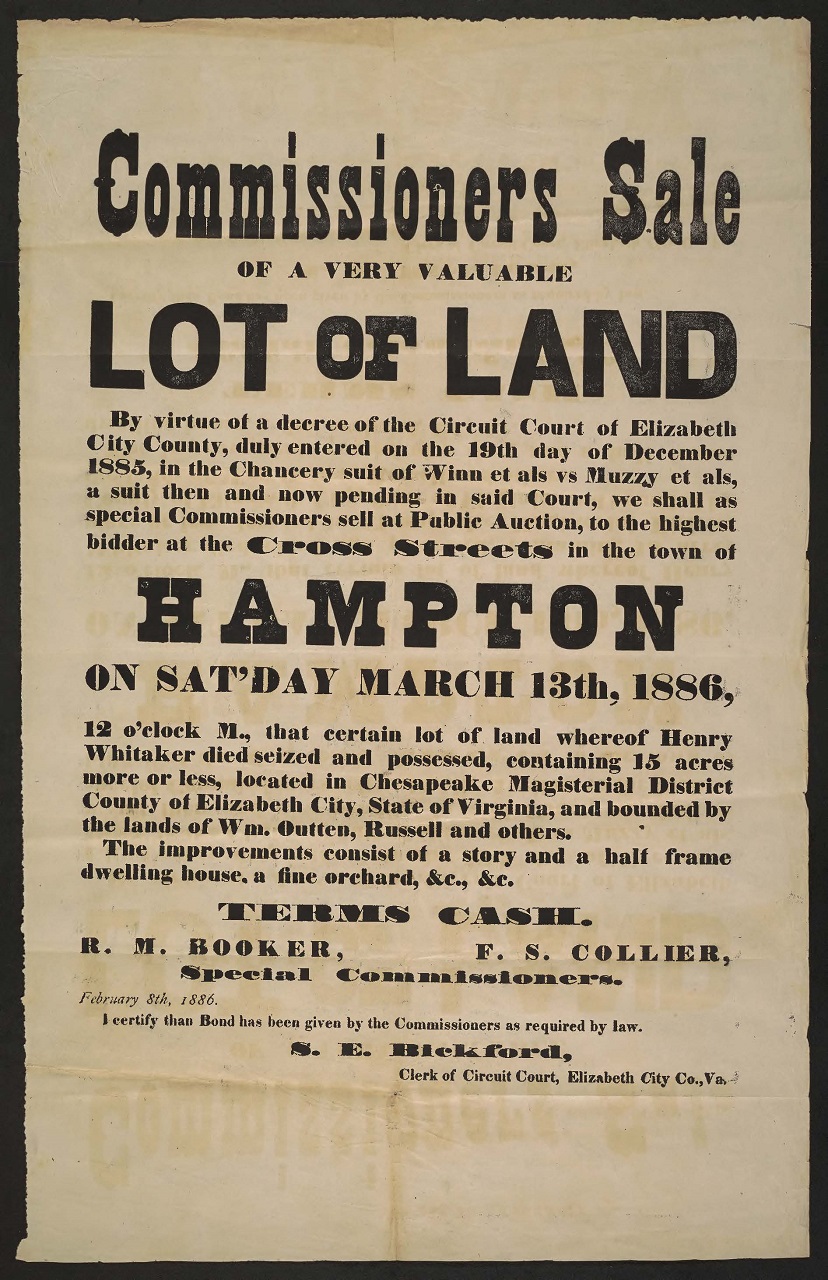 The General Court papers burned completely in Richmond in 1865 so the ultimate disposition of this suit is unknown.

The Elizabeth City County chancery suits contain a wealth of information about Fortress Monroe, one of the most well-known landmarks in the Hampton Roads area.  Scores of the plaintiffs, defendants, deponents, and other citizens and soldiers in the suits lived, worked, and spent time in and around the fort.  Chancery Cause 1855-001, James S. French vs. General James Bankhead, consists of two suits involving French, whose property bordered the fort property.  French charged that the Fortress soldiers and contractors were committing waste to his property [i.e. causing physical damage]  by overstepping their boundaries and taking his soil and were firing cannons onto private property and the public road.  Chancery Cause 1867-006, George W. Watts vs. Margaret J. Watts, is a suit for divorce arising because George Watts returned from his years in the Confederate army to find that his wife had had a baby while he was away.  She claimed she became pregnant as the result of a rape by a Federal soldier whom she met when her in-laws forced her to go to Fort Monroe for rations.  The fort also features in suit 1893-001, Adam Ferber vs. Mary Ferber, when Adam was in the United States Army stationed at Fort Monroe. Sent to Louisiana then to New York on soldierly duties, he returned to find his wife living in sin with a Mr. P[asquale] Chinchilla, described as an elderly gentleman with a big white mustache who spoke broken English and was a resident of the Soldiers Home.

Many suits detail the post-Civil War difficulties that residents of Elizabeth City and Hampton had in attempting to recover property considered abandoned after they fled the Union occupation of the area.  Chancery Cause 1874-016, Mattie Bates by etc. vs. Martin McDevitt, concerns Bates suing McDevitt, the county treasurer, to prevent the land being sold for non-payment of taxes.  Bates’ grandfather had left the land during the war and it was subsequently occupied by freedmen under the protection of Fort Monroe and the Freedmen’s Bureau.  Chancery Cause 1877-007 is made up of three suits: Admr of Elizabeth Booker vs. Exr of George Booker etc, Virginia Booker vs. Marshall Booker etc, and Richard M. Booker vs. Ann Booker etc.  It includes the deposition of George W. Semple regarding attempts by George Booker, Jr., to keep the federal government from confiscating his property because of his status as a former Confederate.  It mentions the swearing of affidavits before the Freedmen’s Bureau and other legal maneuvers to keep a hold on his properties in the county.  Similarly, Chancery Cause 1878-009, Exx of Francis Mallory vs. James W. Downey etc and Ella Downey vs. Exx of Francis Mallory etc is a debt suit involving land that was confiscated by the federal government during the war and later used by the Freedmen’s Bureau.  Documents from the U.S. District Court and the Freedmen’s Bureau that detail the confiscation and activities and buildings built for the benefit of freedmen are included as exhibits.

Suits involving African Americans and their pre-war enslaved lives emerge prominently in the chancery suits.  Chancery Cause 1870-017, Sidney Parker etc vs. Exr of Thomas D Parker etc, contains 1857 free Negro registrations for Mary Ann Parker, Sidney Smith Parker, and Mary Ann Parker, who were freed by the will of Thomas D. Parker in 1855.  Chancery Cause 1878-005, Jane Shields vs. Anne Bailey, includes the will of Nancy Tarrant (written 1843, proved 1869) where she emancipates “my niece Louisa and her child George” and also mentions a husband named Jim Bailey.  Another section of the will instructs that money be used towards the purchase and emancipation of her niece Jane, owned by a Captain Harding, and nephew Matt, owned by Edward King.  Chancery Cause 1886-016, Mary Susan Williams vs. Admr of James Williams etc, concerns James, who was a slave, and the plaintiff, who claimed to be his daughter by a pre-war wife.  Mary Susan was bought in Virginia as a slave and moved to Montgomery, Alabama, with her owner. The central dispute of the suit was over who was and who was not a legitimate wife and child of James.  Information is given throughout the suit about different family members, former owners, pre- and post-war marriages, and the current locations of family members.  Both pre- and post-war wives and children were validated by the court. 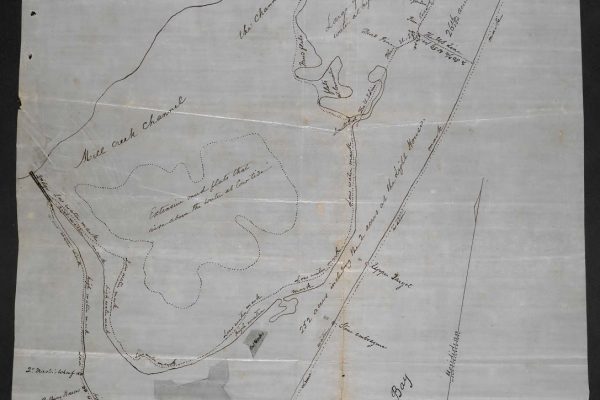 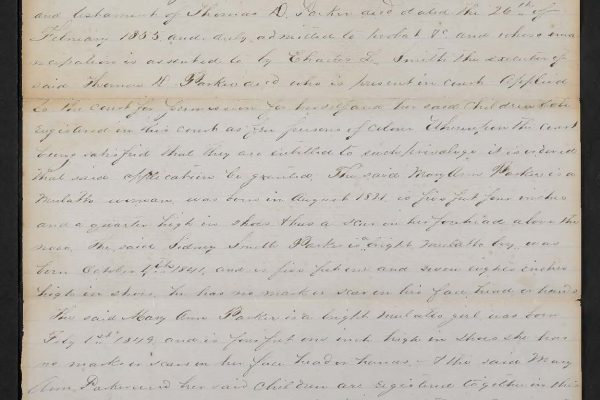 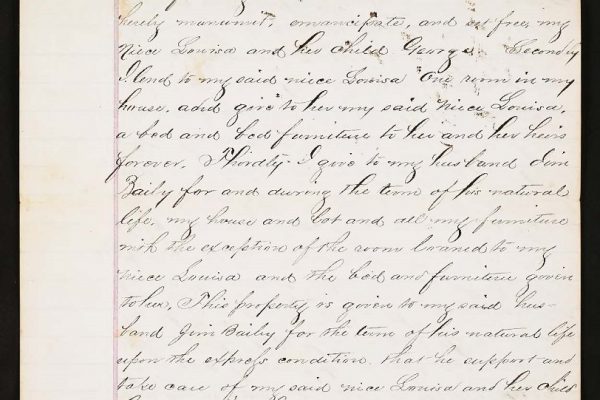 Will of Nancy Tarrant 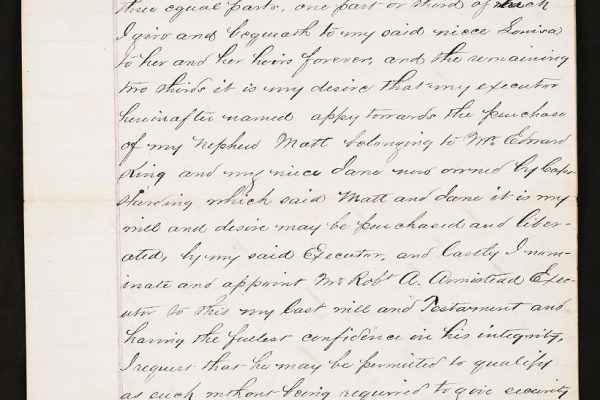 Will of Nancy Tarrant pg. 2 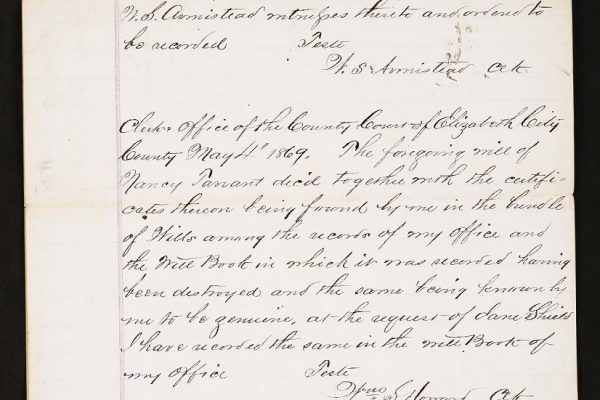 Will of Nancy Tarrant pg. 3 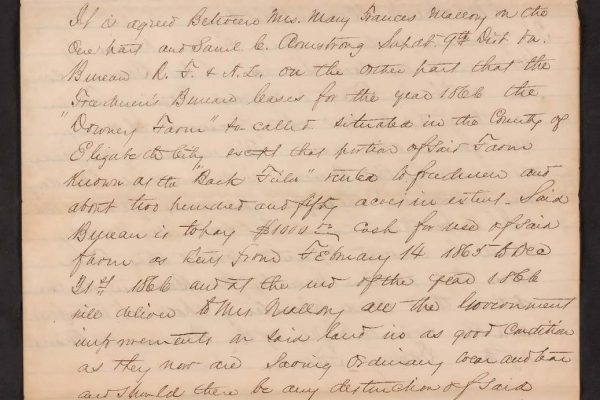 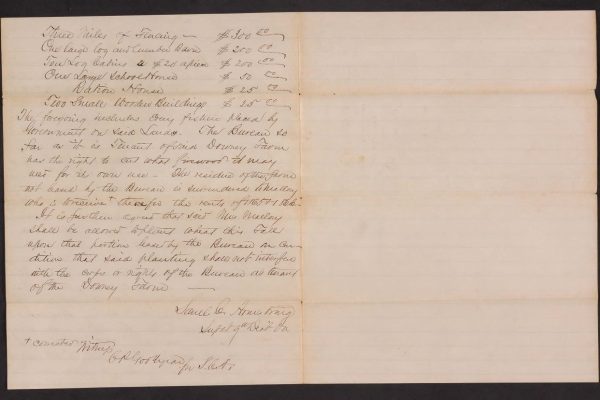 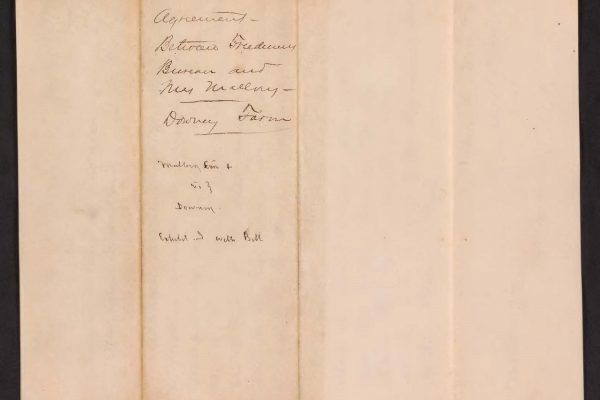 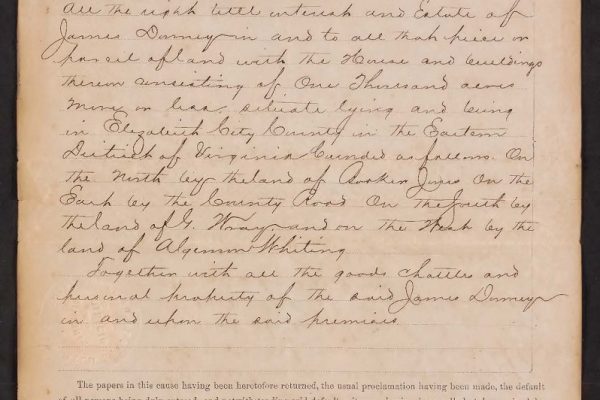 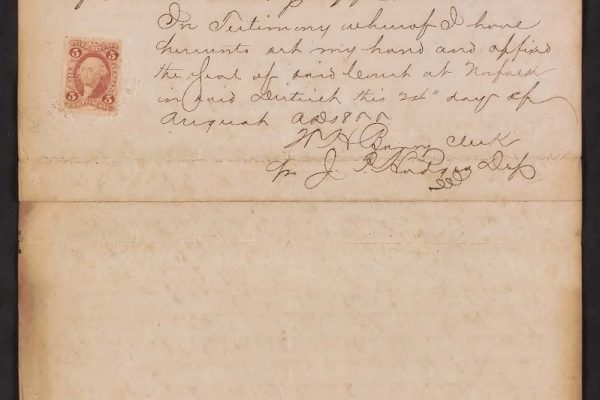 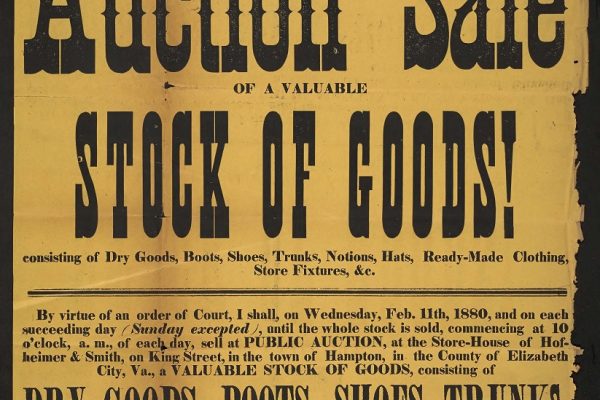 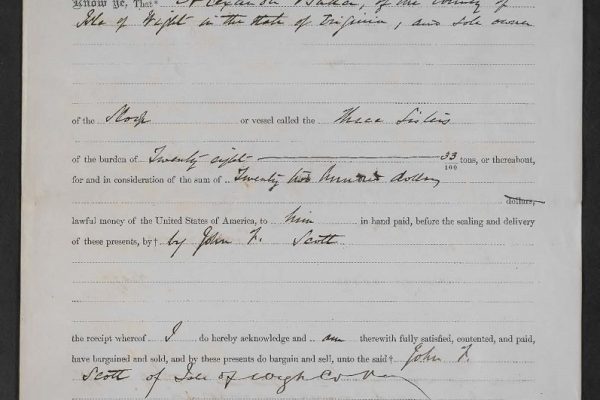 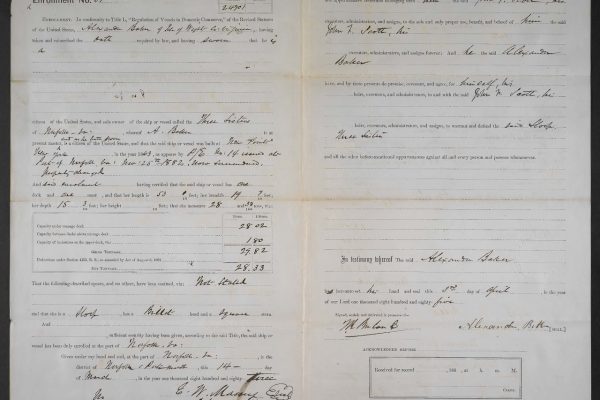 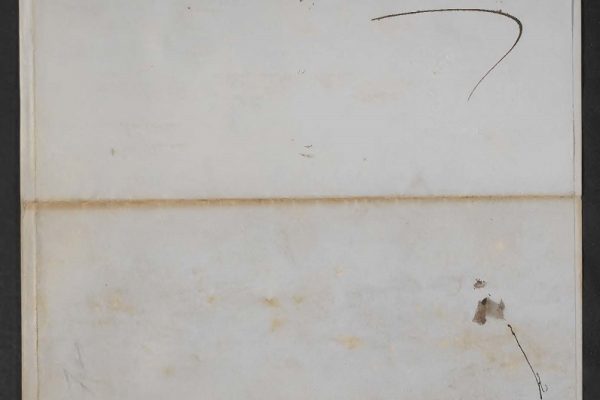 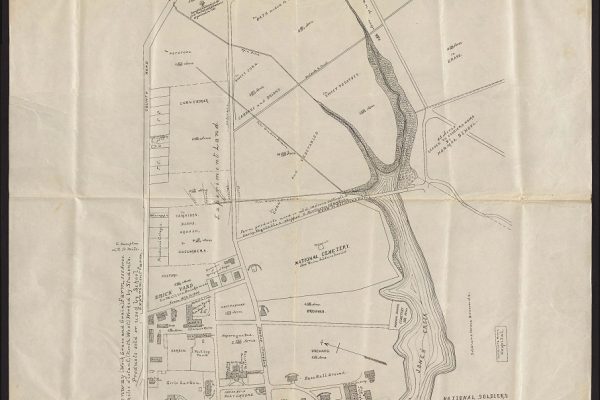 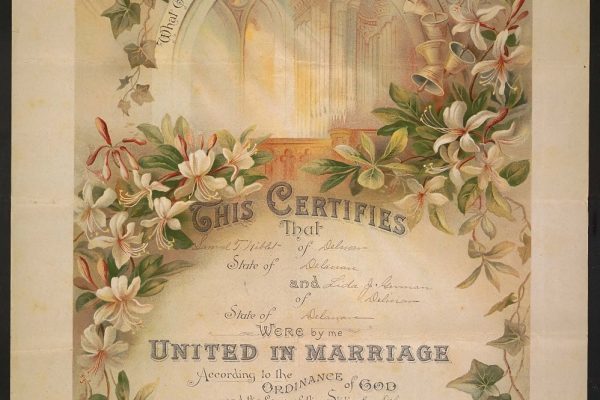 Chancery Cause 1888-014, Mary Howard, widow, alias Mary Black vs. Admr of James Black etc, involves a cohabitation register marriage.  Howard (alias Black) claimed to be the widow of James Black by virtue of the 1866 Virginia cohabitation law legalizing slave marriages.  After the war he left Mary and took up with Hattie Hill (alias Hattie Black), calling her his wife, and leaving property to her upon his death.  Howard sued for her portion as the actual widow.  The suit includes depositions from two sons of Howard’s and Black’s former owner in York County about them receiving permission to cohabit prior to the Civil War.  Chancery Cause 1894-003, Almedia Eley by etc. vs. Lewis Eley, is a divorce of formerly enslaved people.  Almedia claimed they were married by the 1866 cohabitation law; Lewis claimed they cohabitated as slaves but not after the war.  They lived part of the time post-war in Nansemond and there is mention of a Nansemond proclamation circa 1870-1873 stating that all colored people who were currently cohabiting without being legally married must marry or else face prosecution for lewd and lascivious cohabitation.  Lewis was in the U.S. Colored Troops 35th Regiment and was wounded during his service.  He was living with another woman as his wife at the time of the divorce filing.  His two surviving children with Almedia, Josephine and Eliza, testified that they called him “Pappy” and that they always knew him as their father and he acknowledged them as his children.

The Elizabeth City County Chancery Causes, 1747-1913, join the growing list of localities whose chancery causes have been digitally reformatted and made available through the LVA’s innovative Circuit Court Records Preservation Program (CCRP), which seeks to preserve the historic records of Virginia’s circuit courts.