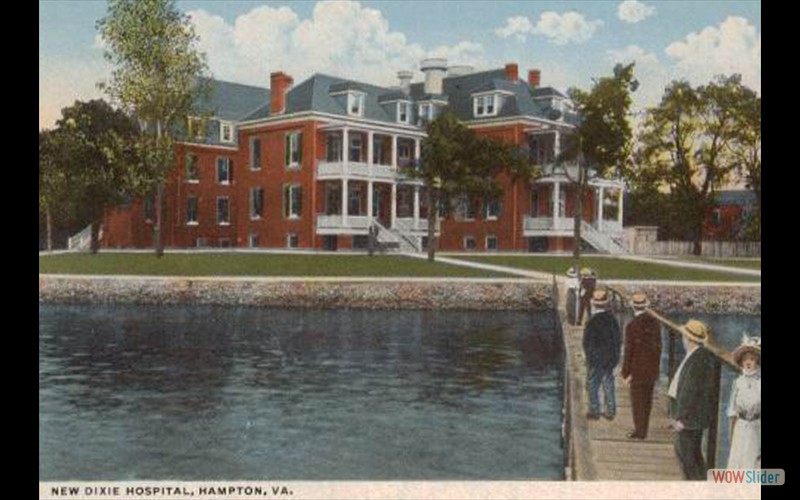 Dr. Paul Parker, medical examiner of Elizabeth City County, Virginia, wrapped up a 19 April 1935 coroner’s inquest by ruling that “Dorothy McGaha Reeves came to her death on April 15th, 1935, of general peritonitis and perforated uterus as a direct result of a criminal abortion performed by Dr. N[elson]. F[rederick]. McNorton, of York County (Yorktown), Virginia, on the 9thday of April, 1935. Death occurred at the Dixie Hospital, Hampton, Virginia, on April 15th, 1935, about 12:20, A. M.” 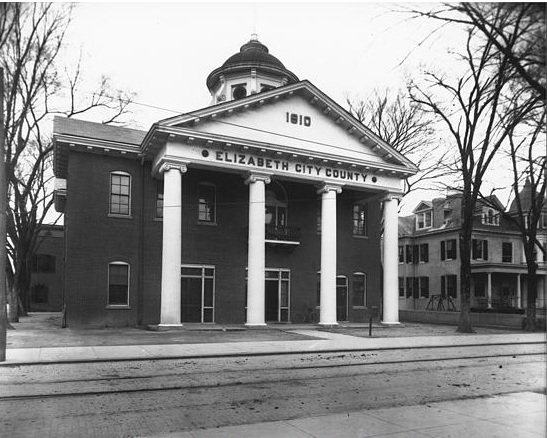 Dr. McNorton was arrested on 15 April but charges were not disclosed. Authorities were led to him based on a deathbed statement given by Reeves, as well as Dr. Parker’s inquest findings. The Danville Bee reported that Reeves purportedly went to Dr. McNorton’s office for the illegal operation on the evening of 9 April in the company of Nellie Frye. Five days later, without ever having returned to work, Reeves was taken to the hospital where she died the following morning. In addition to Dr. McNorton’s arrest, later revealed to be on charges of second-degree murder and performing an illegal operation, Frye was also arrested. She was held as a material witness and also on the charge of being an accessory to the illegal operation.

Dr. McNorton belonged to a noted and influential African American family in Yorktown. His father, Daniel M. Norton [later McNorton] (d. 1918), was born a slave but had escaped to Troy, New York, before the Civil War. He learned medicine there and became a licensed physician. Upon returning to Virginia in 1864, the elder Dr. McNorton became one of Hampton’s most important political leaders, building an effective political machine and serving as a justice of the peace in York County for four decades. He had also served on a Freedmen’s Bureau Court in 1865, testified before Congress on Reconstruction as a delegate for Hampton in 1866, represented James City and York Counties in the Virginia Constitutional Convention of 1867-1868, and served in the Senate of Virginia from 1871 to 1873 and from 1877 to 1887.

Daniel McNorton married the former Sarah Gant of Zanesville, Ohio, the daughter of Nelson T. Gant and Anna Maria Hughes, who themselves had been slaves in Loudoun County, Virginia. Dr. McNorton had his medical practice in the old Yorktown Customs House, which he purchased at auction in 1882. Later, the building served as a school for African American children. It served other purposes, including World War I-era military housing, until the younger Dr. McNorton sold it to the Comte de Grasse Chapter of the Daughters of the American Revolution in 1922.

At a preliminary hearing, Dr. O. W. Ward, the physician who found Reeves in “very critical” condition at her place of lodging and who urged her to go to the hospital, related her statement to him that “she had had an illegal operation performed by Dr. McNorton.” Nellie Frye divulged to the court that Reeves [variously described as being 15, 16, or 18 years old] told her that “she was in trouble” and that she needed money. Frye willingly offered the funds and accompanied Reeves to Dr. McNorton’s office for the operation. Identifying the prominent African American doctor as she spoke in the courtroom, Frye said that Reeves told McNorton of her situation, and he agreed to perform the operation. Furthermore, she quoted the doctor as saying he would help Reeves out, “if she would keep it quiet, because if she didn’t it would get us all into trouble.”

At the first trial in June 1935, the prosecution presented ten witnesses, including Nellie Frye, who described sitting in the room and watching the operation, noting that she had to turn away at times. The defense attempted to supply alibis for Dr. McNorton’s whereabouts on the evening of 9 April. The jury reported being deadlocked after four hours of deliberation and the judge declared a mistrial. The Newport News Daily Press also reported of this first trial that the death certificate was amended when defense counsel objected to its reading “criminal abortion.” However, research revealed only one death certificate in the Elizabeth City County coroner’s inquest files for Dorothy Reeves [none for Dorothy McGaha] and it still reads “criminal abortion.” 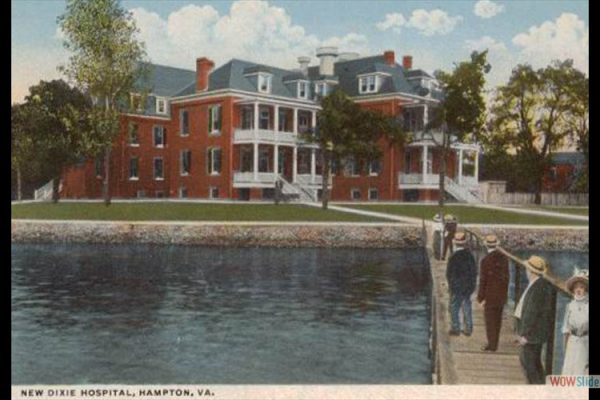 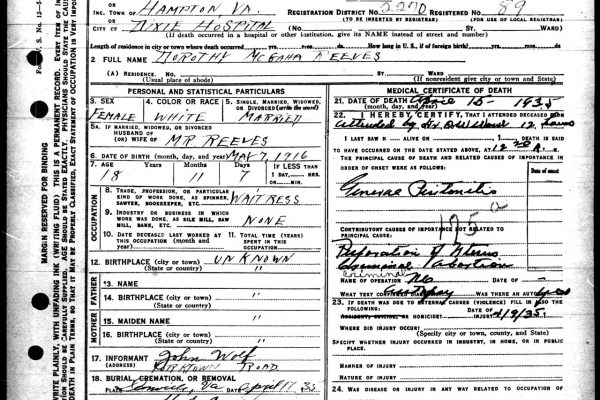 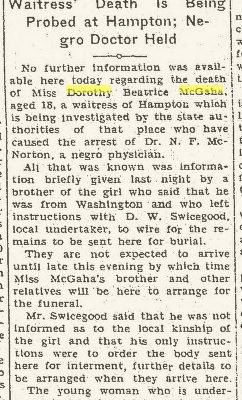 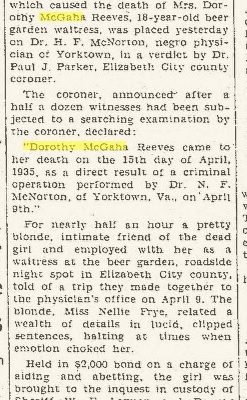 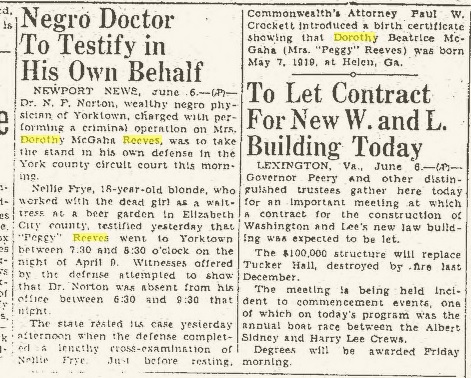 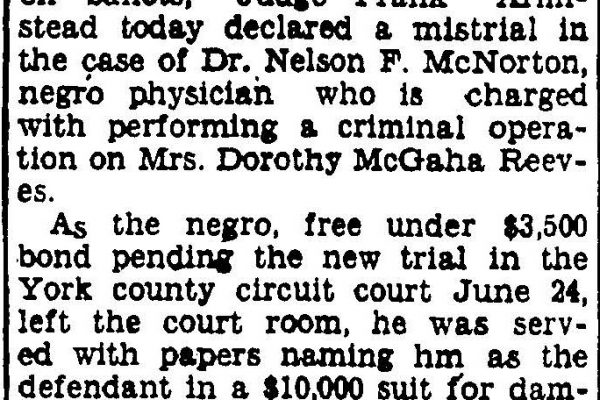 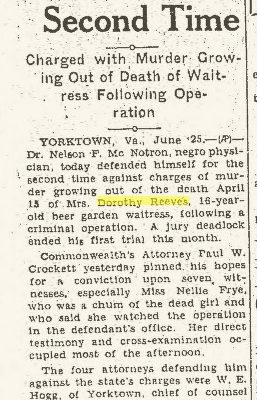 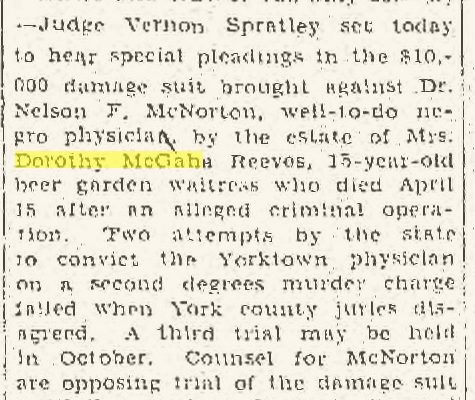 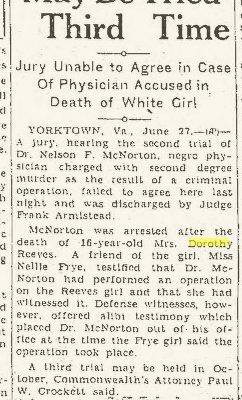 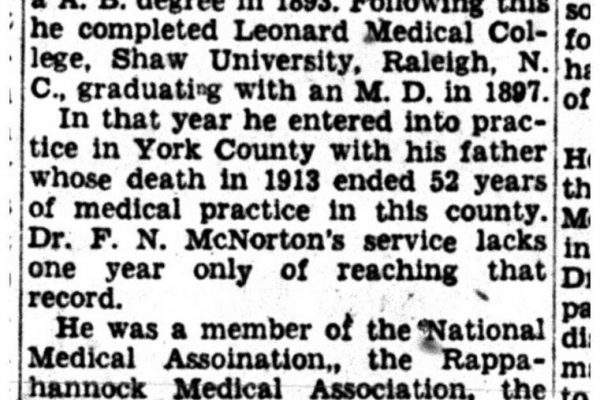 The second trial, also in June 1935, followed much the same pattern. Nellie Frye was, once again, the star witness for the prosecution and Dr. Parker, along with the other doctors who had attended Reeves, gave their technical medical testimony. A victory for the defense came when the deathbed statement of the victim indicting McNorton was again ruled inadmissible, just as it had been in the first trial. The defense once more based their case on supplying alibis, with five of their witnesses giving testimony that Dr. McNorton was making rounds in the community and could not have been in his office on the night in question. The defense also examined the possibility of a self-performed abortion, which Dr. Parker admitted was possible, in an attempt to show that the condition preceding Reeves’s death must have resulted from the work of an amateur and not someone with the skill and experience of Dr. McNorton.

In this second trial, the concluding arguments for both sides took a markedly sensational turn. According to the Daily Press, the prosecution pointed out that all of the defense witnesses seemed to be close friends of the accused. Defense counsel Charles Berkeley turned severe when he stated, “a novice committed that abortion,” implying that either Reeves or Frye undertook the procedure upon finding that Dr. McNorton was away from his office. The final defense statement came from chief counsel W. E. Hogg. He questioned the character of the women by recounting their actions both prior to and during their time in the Hampton Roads area. He testified that, without steady employment, they had travelled for 13 days between North Carolina and Virginia, had stayed in tourist cabins and hotels, and had paid for their food. “Now, they couldn’t have eaten very much or else they got money somewhere else.” He closed by examining motive, telling the jury that Reeves would have had to explain to her husband, who was living in North Carolina, how she had become pregnant, and that she faced losing her job if she did not get rid of the child.

After three hours of deliberation this trial, too, ended in a mistrial. Commonwealth’s Attorney Paul Crockett then asked that Nellie Frye be released from jail, where she had been held since April as she was unable to post bond. Judge Frank Armistead granted the motion. Crockett later stated that the case would be tried again, likely at the next court term in October.

In an unexpected move by the prosecution in December 1935, Crockett asked that the case be nolle prossed. Latin for “we shall no longer prosecute,” this is an admission by the prosecution that either the charges cannot be proved, the evidence does not support prosecution, or the prosecutor believes the accused to be innocent, therefore, the case would not be tried a third time. Crockett stated that he was “of the opinion that if you tried the case 50 times you’d never get any result except a hung jury.”

It was never proven who really caused the death of the teenaged beer garden waitress. But examination of coroner’s inquests informed us of the suspicious death of Dorothy Reeves, local court records indicated that two trials had taken place, and newspapers filled in some of the details of her short life and documented the legal maneuvering on both sides. These sources, working in conjunction with other local records such as deed books, meeting minutes, and marriage licenses, can tell us much about the life and times of our towns, cities, counties, and the people who lived in them.