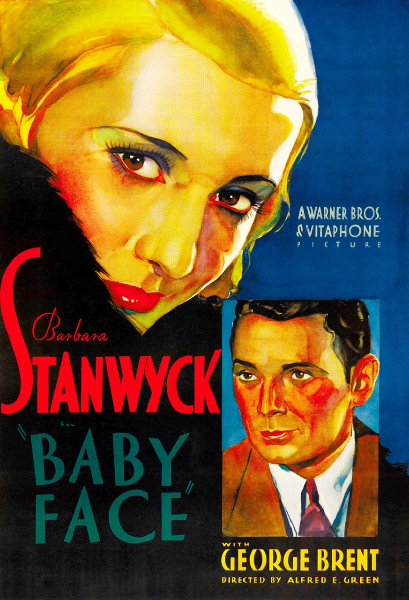 We Know What’s Best For You: The Virginia Division of Motion Picture Censorship

From 1922 to 1966, the Virginia Division of Motion Picture Censorship was responsible for reviewing all motion picture films and their associated advertising materials– banners, posters, newspaper and magazine ads– to determine if the content was obscene or bereft of good morals. First established as the Board of Censors, but later reorganized as a division within the Office of the Attorney General, Department of Law, the body licensed those films that passed review and collected fees for those licenses.

One movie that came under the division’s scrutiny was Baby Face. Produced by Warner Brothers in 1933, the film featured Barbara Stanwyck and George Brent. The plot followed Stanwyck as Lily “Baby Face” Powers, a young woman whose early life included a stint as a barmaid in her father’s saloon.  In this decidedly sordid atmosphere, Lily constantly fights off the advances of much older men. Upon her father’s death, she takes the opportunity to leave the small mining community and head to the big city via boxcar.  As a way to better her station in life, she pursues nearly every man she meets in an effort to climb the social ladder.  She finds employment at a bank and seduces a young bank clerk (played by John Wayne), then moves on to his supervisor. He is followed by a bank vice president and, finally, she marries the bank president, played by George Brent.

With each conquest, Lily gains more wealth and position through the gifts and favors of her suitors. However she is also smart in her own right, and successful in the job responsibilities that she holds after her affairs with various men at the bank. The results of Lily’s actions included jealous suitors fighting over her, attempted murder, and suicide–all because of her callous actions towards the men she seduces.  The movie portrays Lily as a willing opportunist looking out for her own best interests, stepping over the men with whom she has sexual relationships, and eventually leaving them all for a successful, happy life in Paris.  This self-serving mindset is addressed explicitly in one scene in the movie when she receives advice from an older man, who encourages her to always look out for herself and use men for whatever she can get.

When the Division of Motion Picture Censors in Virginia reviewed the film they saw no redeeming value whatsoever in the “get all you can get” theme of the movie.  A member of the board sent a letter to the studio stating as much. The studio responded with an offer to change dialogue in the script and desperately appealed to the board to consider the cost of lost revenue to the studio, as well as to the state in missing license fees.  Virginia board members sought the opinions of board members from other states. The state of Kansas’s board saw nothing wrong with the film while the Ohio censors were so outraged they sent a letter and a follow-up Western Union telegram that simply read “Ohio Rejects Baby Face.” 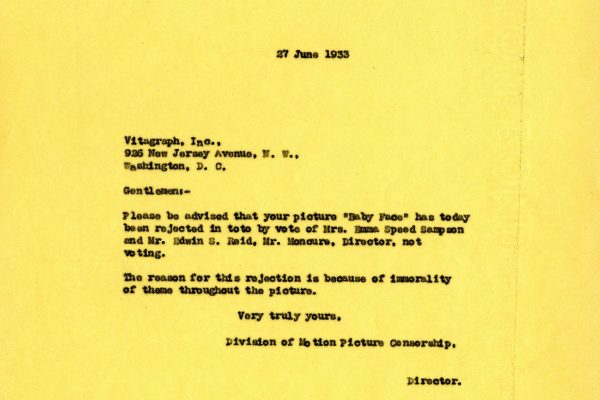 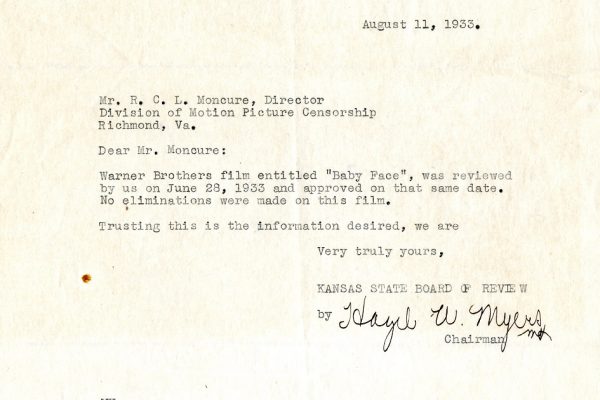 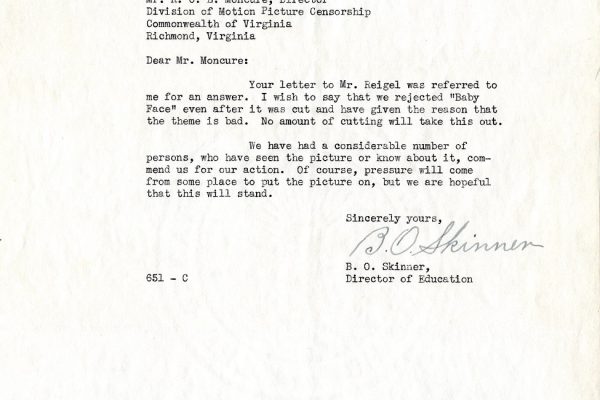 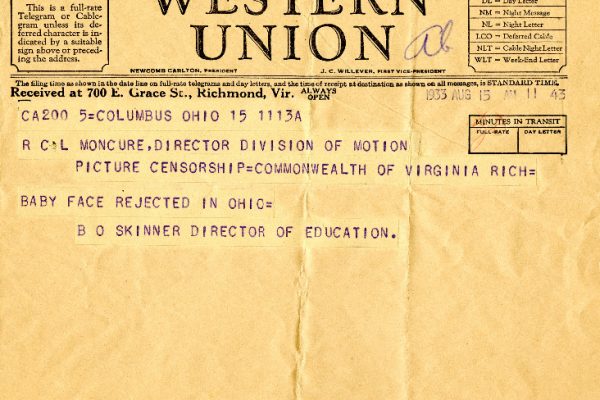 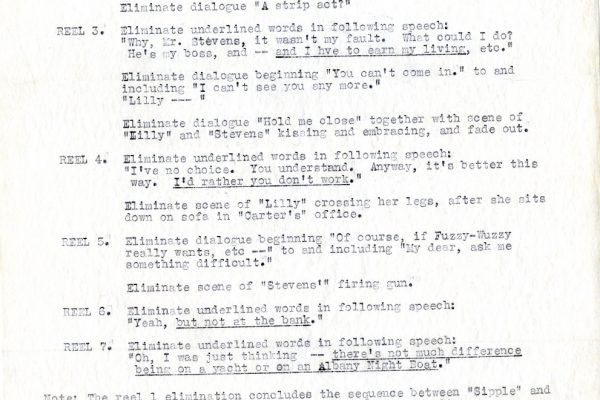 With changing social norms in the 1960’s and more relaxed First Amendment interpretations by federal judges, the need for state censors gradually decreased and the department was de-funded by the General Assembly in 1966.

Documents related to additional movies viewed by the Virginia Division of Motion Picture Censorship, including correspondence between the division and studios, can be found in the “General Correspondence and Controversial Films” series of the Records of the Division of Motion Picture Censorship, 1926-1968, filed as Accession 26515 in the Library of Virginia’s State Records Collection.

Attorney General of VirginiacensorshipFilms and Television