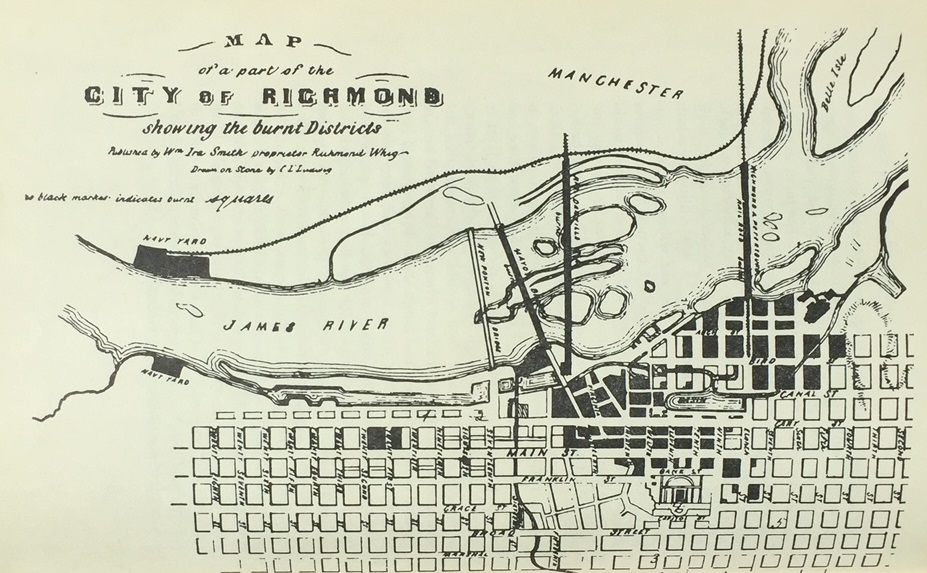 An Unexpected Survivor of the Day: The Daily Dispatch April 3, 1865/The Puzzle of Issue No. 77

To review, here’s a newspaper roll call of the five daily newspapers (there were also weekly papers – four of them religious) in Richmond in late March at the close of the Civil War: the Richmond Examiner, Enquirer, Whig, Sentinel and (leaving no doubt about its frequency) the Daily Dispatch. 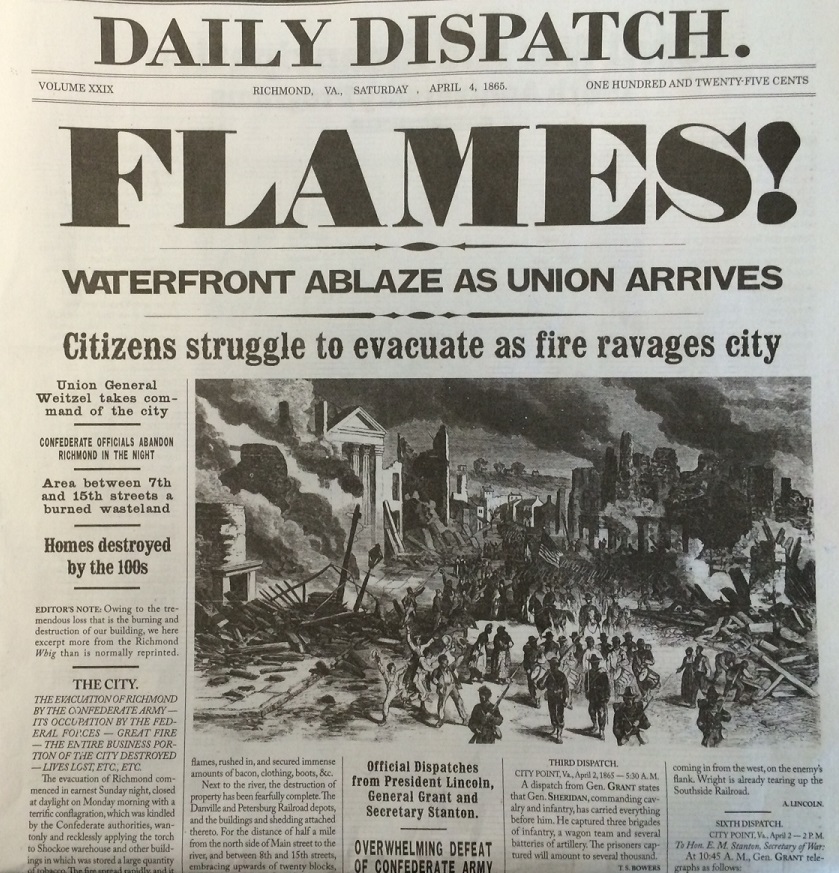 They publish in the war years (the Sentinel beginning in 1863) despite a “decrease in advertising, the shortage of ink and paper, the strike of printers, the loss of skilled workman by conscription, and…a depreciation of the currency, causing prices to rise to unprecedented levels,” as Lester Cappon writes in his introduction to Virginia Newspapers 1835-1935, a ready reference at the Project.

There’s no work around or compromise with fire, however, and the destruction of much of the city center April 3 (a Monday) one hundred and fifty years ago – marked with much ceremony here in Richmond over the weekend – left only the Whig capable of printing a narrative of the chaos accompanying the city’s surrender.

And only after the approval, announced in an editor’s note, of the occupying Federal commander.

Given our task as preservers of Virginia’s newspaper heritage, we’re also interested readers. This includes the present day 21st century descendent of the Daily Dispatch, The Richmond Times-Dispatch.  Especially when they reproduce the past in such compelling fashion as they did in last Saturday’s edition.

Something on page 2 caught our eye: 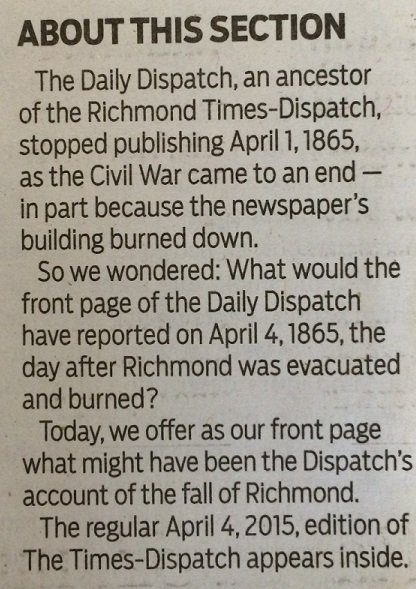 What’s that again?  April 1, the last issue of the Daily Dispatch?  What then of the April 3rd issue we have in hand and read in preparation for the blog the Friday previous?   Bear in mind, if you’re an archivist, this advances the tingling onset of mystery and intrigue.  Already we brooded with some fascination over how a paper could be circulated on a day of such steadily progressing chaos.

Are we being told the April 3rd issue doesn’t exist?  But there it was before us, an original ink press copy.  It may be the case that the current Times-Dispatch believed its war-time publishing ended on April 1 because its own historian told them.  That’s how it reads on page 26 of the chapter “Origins” in The Richmond Times-Dispatch, The Story of a Newspaper by Earle Dunford.

How was this issue overlooked?  A hand-written note in the upper right-hand corner, now inspected with additional care, provides a telling clue:

The Boatwright Library at the University of Richmond has confirmed to us that they too have this issue, making it the only other holding institution to our knowledge which has archived a copy. If indeed this particular issue of the Daily Dispatch experienced only the most limited of circulation, if any at all, and never discovered its intended readership, that does add something to its aura.

Much of that day’s newsprint may have gone up in flames with the rest of the Dispatch’s offices and production facility.  Now had a citizen of the city held a copy in hand that morning, say, at break of dawn, this is the column that might capture one’s attention:

An artful sentence: “On the preservation of the Petersburg line of defences was believed to depend the safety of this city.” Elegant in its restraint, faintly sorrowful in its reticence to reveal the full implication-that it’s over.  Richmond will fall.  But the timetable of the war is now solely in the grip of the Union Army and at 8:15 am a message is composed for Grant’s headquarters that boasts the capture of the South’s capital.

The action of the day outpaced the expectations of the April 3rd Daily Dispatch and within hours deepened the insult with the newspaper office’s incineration.

In defense of history and accuracy, the Project feels obliged to make a brief remark concerning the Times-Dispatch “replica” of the Daily Dispatch:  The banner is correct, but beyond (or below) that, it’s a captivating work of the imagination.

An RTD editor’s note admits much of the copy came from the Whig, since, as we know, the Dispatch was dispatched to ash.  Here’s how the Whig appeared to Richmonders that Tuesday, April 4th. 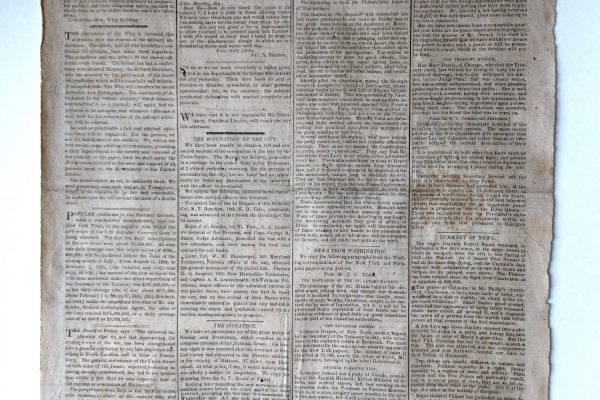 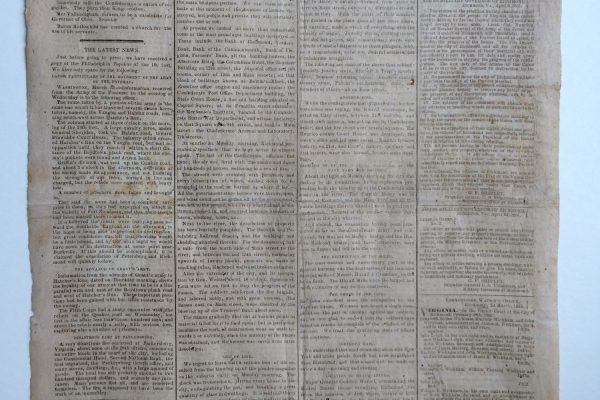