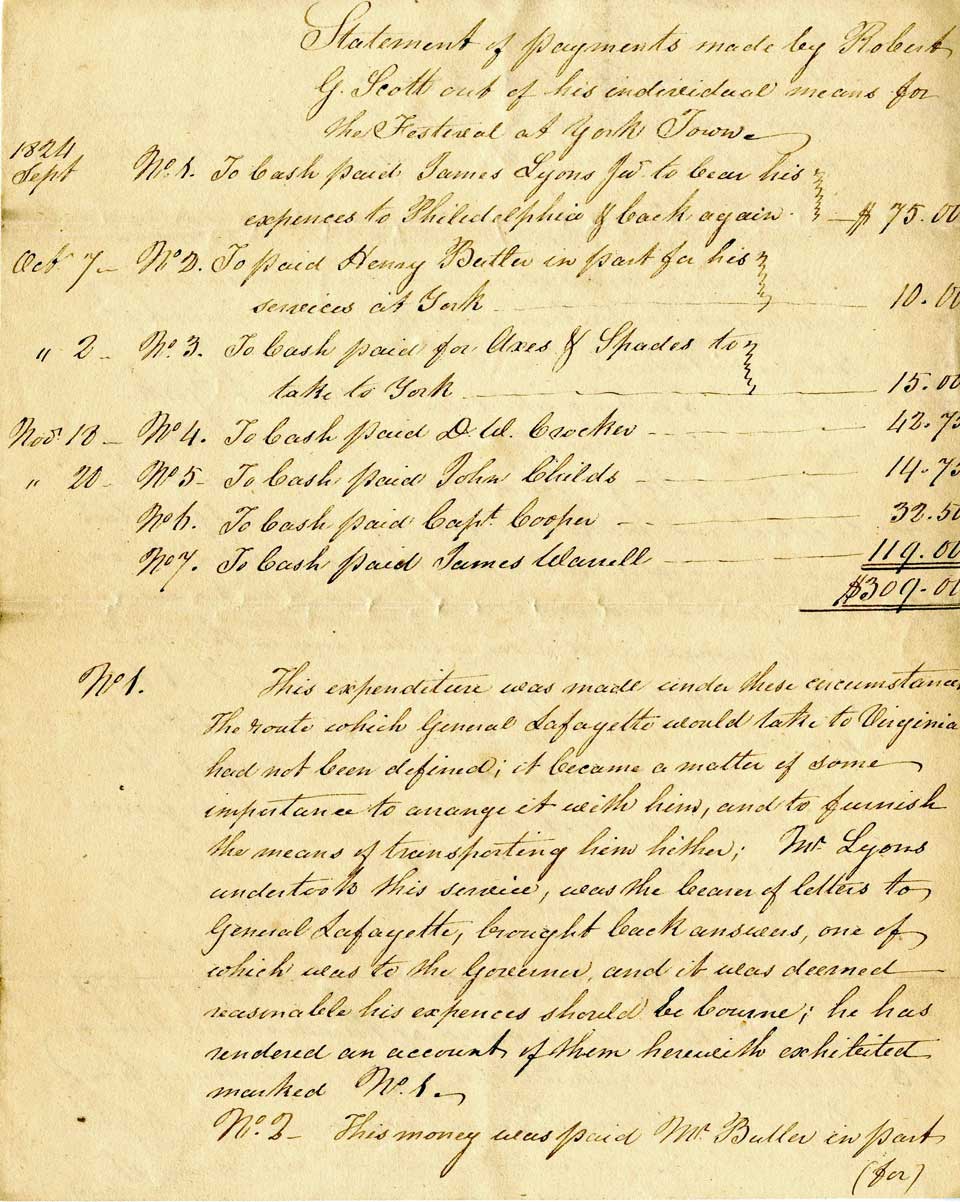 “Lafayette, we are here!”

Twenty years ago, a small group of businessmen and former diplomats conceived a plan to build an authentic replica of the French frigate Hermione, the ship that carried Marie Joseph Paul Yves Roche Gilbert du Motier, the Marquis de Lafayette, to America in 1780 with the news of French support for the American Revolution. 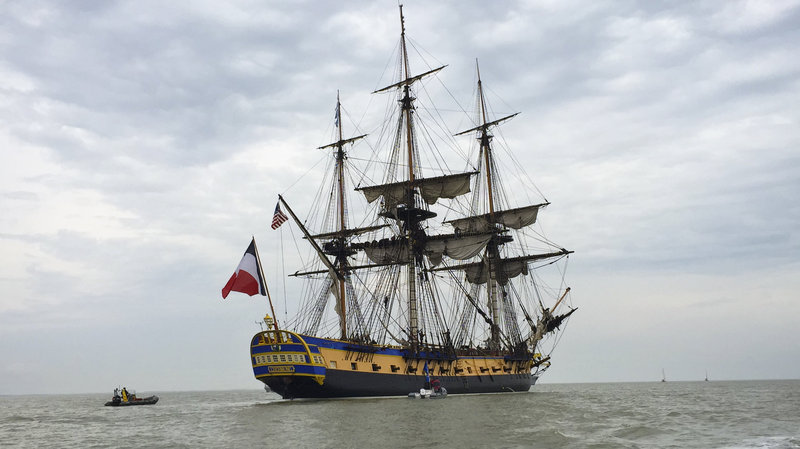 The group hoped that this project would rekindle close ties between France and the United States, create a lasting educational legacy, and bring life to both Lafayette’s memory and the spirit of liberty that he embodied.  The reconstructed Hermione is now a reality and the tall ship is currently en route to the United States, where it will visit twelve ports along the Eastern Seaboard over the course of the summer.  Hermione will be docked at Yorktown from 5-7 June 2015, and Alexandria from 10-12 June 2015, and the public are invited to the festivities.

Lafayette played a crucial role in American and Virginia history.  Without his dedication to the cause of independence and his ability to persuade others to provide much needed financial and military resources, the outcome of the American Revolution might have been very different.  “The moment I heard of America, I lov’d her,” Lafayette recalled in 1778, a year after he set sail from France to offer his services to the Continental Army. “The moment I knew she was fighting for freedom, I burnt with a desire of bleeding for her.”  Although not quite twenty years old when he reached American shores in the summer of 1777, the young Frenchman’s patriotic fervor and his high standing in French society quickly won him influential friends.  Less than two months after his arrival he received a commission as a major general under the command of General George Washington.  The two men developed a friendship that would last until Washington’s death.

During 1777 and 1778 Lafayette fought in the Battles of Brandywine, Monmouth, and successfully engineered the strategic evacuation of more than a thousand American troops following a fierce encounter with British forces at Newport, Rhode Island. Early in 1779 he returned to France to secure his government’s support for the American cause.  Lafayette effectively argued the case for American independence with French officials, and he returned aboard Hermione in April 1780 with the welcome news that King Louis XVI was sending seven ships of the line, two frigates, several smaller armed vessels, and five thousand troops to engage in the fight. The arrival of the French in the summer of 1780 provided a psychological boost to American military leaders, but it was over a year before the combined American and French forces were able to deal the British a decisive blow. The British brought the war to Virginia in 1781, intent on cutting off the state’s ability to aid patriot fighters in nearby states and hoping to establish a British-controlled deep-water port in the Upper South. Instead the French fleet defeated British naval forces at the Battle of the Capes in the Chesapeake Bay and the combined American and French armies surrounded British fortifications at the port of Yorktown, making escape impossible. General Charles Cornwallis, commander of British forces in the south, surrendered his eight-thousand-man army on 19 October 1781. Although the Treaty of Paris was not signed until 1783, the war, for all intents and purposes, was over.

The Library’s collections contain a wealth of material concerning Lafayette’s activities in Virginia in the months that led up to the Battle of Yorktown.  He wrote often to Governor Thomas Nelson regarding the management of the army, his difficulties with county lieutenants, his desperate need for more troops, clothing and supplies, the movements of the enemy, and the arrival of French forces at Jamestown Island.  Lafayette’s letters have been digitized as part of the Library’s collection of Governor’s Letters Received, June 1776-November 1784.  They are available through a searchable database on our Virginia Memory website. 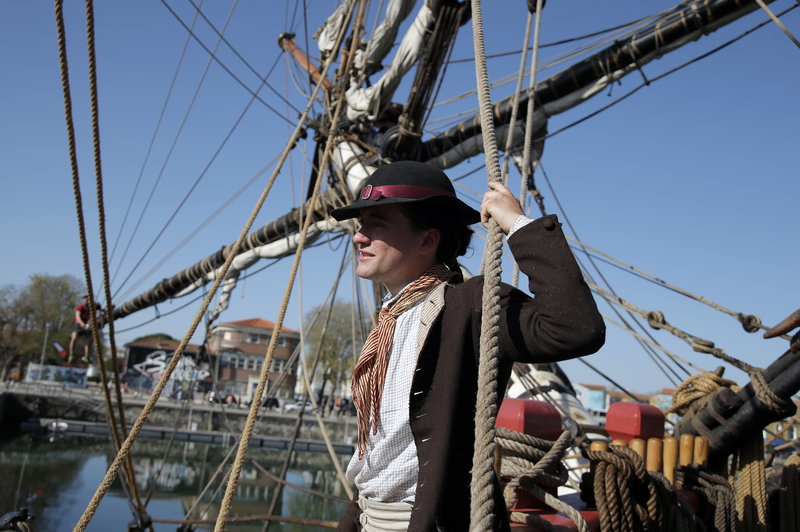 A costumed interpreter portrays an 18th-century sailor on the HERMIONE

In December 1781 Lafayette returned to France, where he worked closely with American emissaries Benjamin Franklin, John Adams, and John Jay to secure continued French support for the new American nation. His love for the United States continued, and he visited the country twice more. In 1784 he spent four months travelling around the United States and was granted honorary citizenship by the states of Maryland, Connecticut, and Virginia. He spent ten days visiting George Washington at Mount Vernon, and at Washington’s urging he spoke to policymakers wherever he went about the need for America to have a strong central government. His final trip to America was in 1824, at the invitation of Congress. Americans gave Lafayette a tumultuous welcome, holding lavish events in his honor wherever he went. Washington was no longer alive, but Lafayette made a visit to Monticello to visit the elderly Thomas Jefferson. When he returned to France, Lafayette took with him a $200,000 payment from Congress in thanks for his services to the cause of American liberty and a box filled with American soil.

The Library’s collections contain many materials documenting Lafayette’s last visit to the Commonwealth, including a letter from Thomas Jefferson to James Madison dated 1 November 1824, inviting Madison and his wife to Monticello to greet Lafayette (Acc. 21653, Personal Papers Collections).  The Auditor of Public Accounts Collection contains a marvelously detailed list of Virginia’s elaborate preparations for a grand celebration of Lafayette held at Yorktown on 19 October, the forty-third anniversary of the Battle of Yorktown. Expenses for the event included construction of a triumphal arch, two obelisks, an amphitheater, and a large marquee.  Other decorations consisted of transparencies, historical scenes painted on cloth and illuminated by candlelight. The vouchers in the auditor’s records show that large quantities of foodstuffs, beverages, china, cutlery, and even furniture were purchased for this event. The General Assembly passed an act on 25 January 1825, authorizing the state to assume the cost of the celebration, which totaled $10,178.04.

The ceremonies at Yorktown and Alexandria this June may not be quite so elaborate, but they will call to mind the important contributions of one of France’s – and America’s – most celebrated 18th century heroes.

An active transcriber on our Making History : Transcribe site brought to our attention a recently transcribed Elizabeth City Co. freedom suit that references Lafayette’s 1824 American tour, which included a return to Yorktown. His discovery is a great reminder of the interconnectedness of history. Click on the image of the freedom suit to view the full document (plus the transcription), in DigiTool. 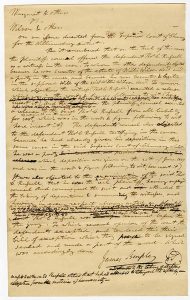