Reading between the lines: the Comstock Act and ads for the treatment of “female complaints” from the Fairfax Herald.

If you read a newspaper from the late 19th century, you’re liable to be bombarded by various medical advertisements—treatments for catarrh, scrofula, and “watery-blood;” cure-alls like sarsaparilla and cod liver oil (described in an ad found in the Fairfax Herald as “palatable as milk”); and vegetable compounds that passionately avow efficacy in curing cancer.

“Mason’s Vegetable Cancer Cure is the greatest triumph of the age.”

Amongst these medical advertisements appear a multitude of supplements for treating “female complaints.” On first glance, these treatments appear to be simply another amusing example of 19th century medical quackery; however, these were not just any pills—these were abortifacients.

Abortion was a relatively common method of limiting family size in the 19th century, an era lacking in other forms of birth control; however, women did not truly consider themselves to be pregnant prior to the “quickening” of the fetus, the point in which she could feel the fetus move, usually around the fourth month of gestation. Abortifacients, therefore, were taken to relieve “obstructed menses.” Traditionally abortions were induced by ingesting home-remedies prepared with toxic herbs, such as pennyroyal, to induce miscarriage. By the mid-19th century abortifacients were widely available commercially, appearing frequently in newspaper advertisements which described the products in vague and euphemistic terms. 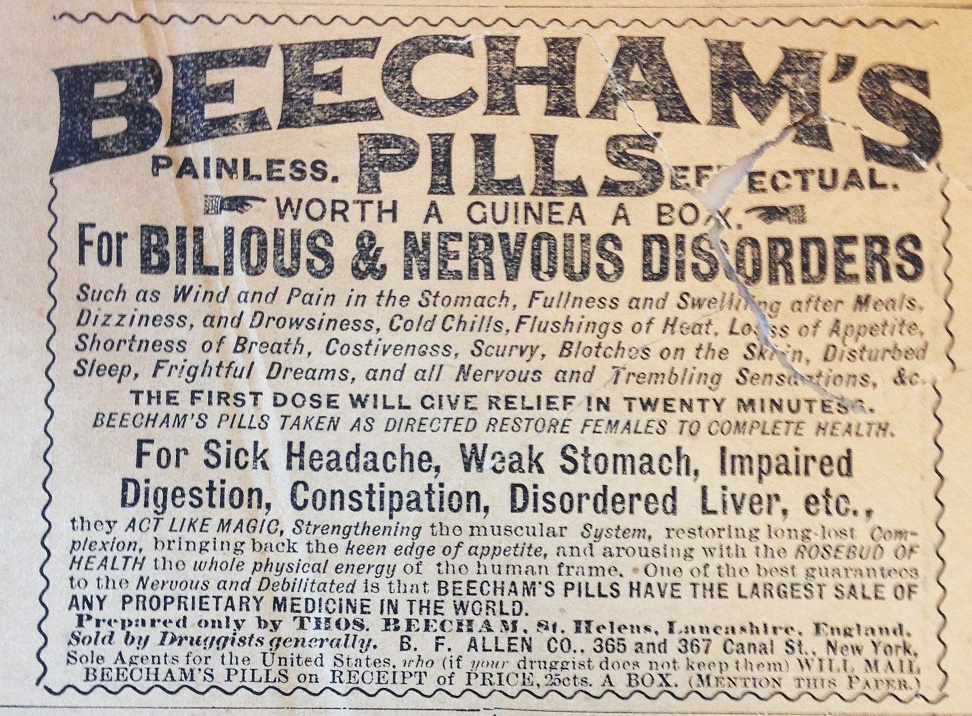 Advertised primarily as a laxative, many women took them to induce miscarriage. The only reference indicative of this purpose is the claim, written in small print, “Beecham’s Pills taken as directed restore females to complete health.”

Despite the commonality of abortifacients in the 19th century, the emergence of anti-abortion campaigns in the mid-19th century ultimately led to the prohibition of abortion that lasted until the Roe v. Wade decision in 1973. Moreover, the Comstock Act of 1873 banned the circulation of abortifacients and information about them, including advertisements, as they were deemed “obscene.”

“Relief for ladies” are a more overt example of abortifacient advertising.

Despite the restrictions placed on abortifacients in the late 19th century, advertisements for them continued to appear through the turn-of-the-century. Advertisers responded to new regulations by becoming increasingly cryptic in their language. Women were expected to read between the lines. Emphasis on menstrual irregularity and vaguely defined “female complaints,” or references to well known abortifacient herbs, such as pennyroyal, are highly indicative of this covert purpose. We found many examples of these sorts of advertisements in issues of the Fairfax Herald from the 1890s.

Advertisements for abortifacients decreased in commonality in the early 20th century, and indeed they disappear from the Fairfax Herald around this time. Thereafter, similar instances of covert advertising arose in the 20th century with douching products. Douching products, such as Lysol, became the most popular, albeit highly ineffectual, method of birth control throughout the first half of the 20th century; however, birth control, like abortifacients, was deemed “obscene” by the Comstock Act. Therefore, these products were advertised for the purpose of feminine hygiene. Additionally, this ad for Paxtine recommends their product as a tooth powder. 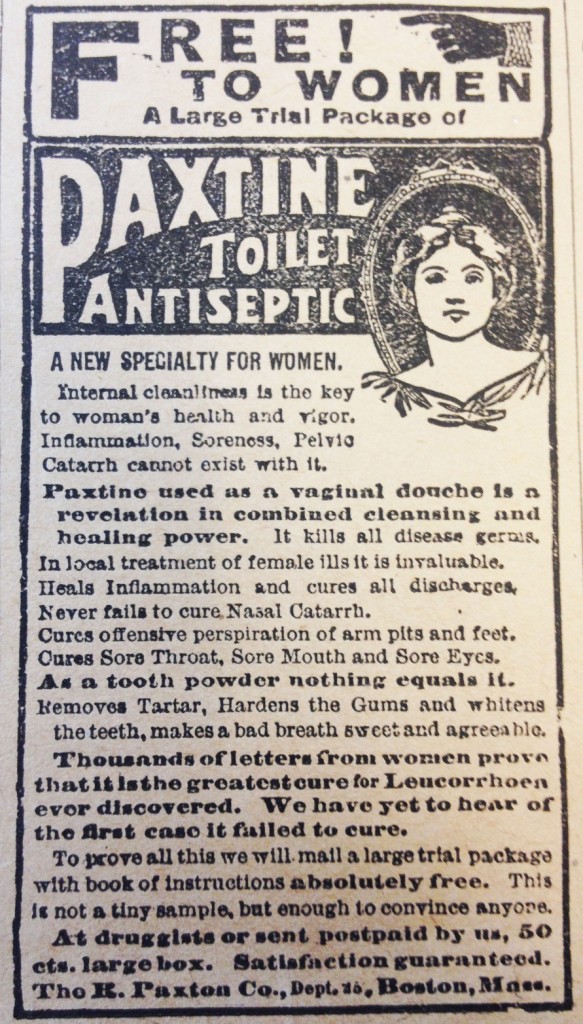