"See to it that his name be not forgotten": An unknown soldier in the State Art Collection

As a non-librarian at the Library of Virginia, I am constantly grateful for both the depth of our collections and the knowledge of our archival and reference staff. My job is to help look after Virginia’s State Art Collection, which consists of artworks owned by the Commonwealth on display in public buildings in the Capitol Square area.  As part of my job, I do research on state art objects in response to inquiries from the public and in order to flesh out catalog files.

The works in the State Art Collection are mostly what you would expect – portraits of public officials, statues and busts of presidents, and the occasional scenic Virginia landscape.  Paintings of private individuals have also become part of the collection over the years, either through association with a notable Virginian, or as a gift to the state.  In some instances, as with this portrait of a World War I era soldier, the identity of the subject and the way the piece was acquired have been forgotten, and we are left with a mystery.

As with any piece of material culture, the best place to start is the object itself. There are a few clues in the painting: the signature indicates that it was painted in 1920 by local artist John Pleasants Walker (1855-1932), and the uniform insignia shows  that our subject is a lieutenant of the 110th Field Artillery, Battery A. The 110th Field Artillery, Battery A is associated with a Maryland unit, but the transfer of officers and the development of units means we shouldn’t assume our subject is a Marylander.* The ribbons worn above the subject’s proper left pocket demonstrate service in the Mexican expedition of 1916-1917 as well as World War I.

But who was he? And why do we have his portrait? I started off my research with the Virginia Chronicle, which is the Virginia Newspaper Project’s searchable online resource.  My initial search for the 110th and Battery A produced several results about the unit’s history and activity during WWI.  One article from the Richmond Times-Dispatch in 1920 detailed the burial of a Lieutenant James B. Cleary, who was from Richmond, a member of the Howitzers, and an officer in Battery A. Focusing the next search on Lt. Cleary pulled up an article, “Lieutenant Cleary Gives Life for Flag,” dated October 9, 1918 and illustrated with an image of the officer. 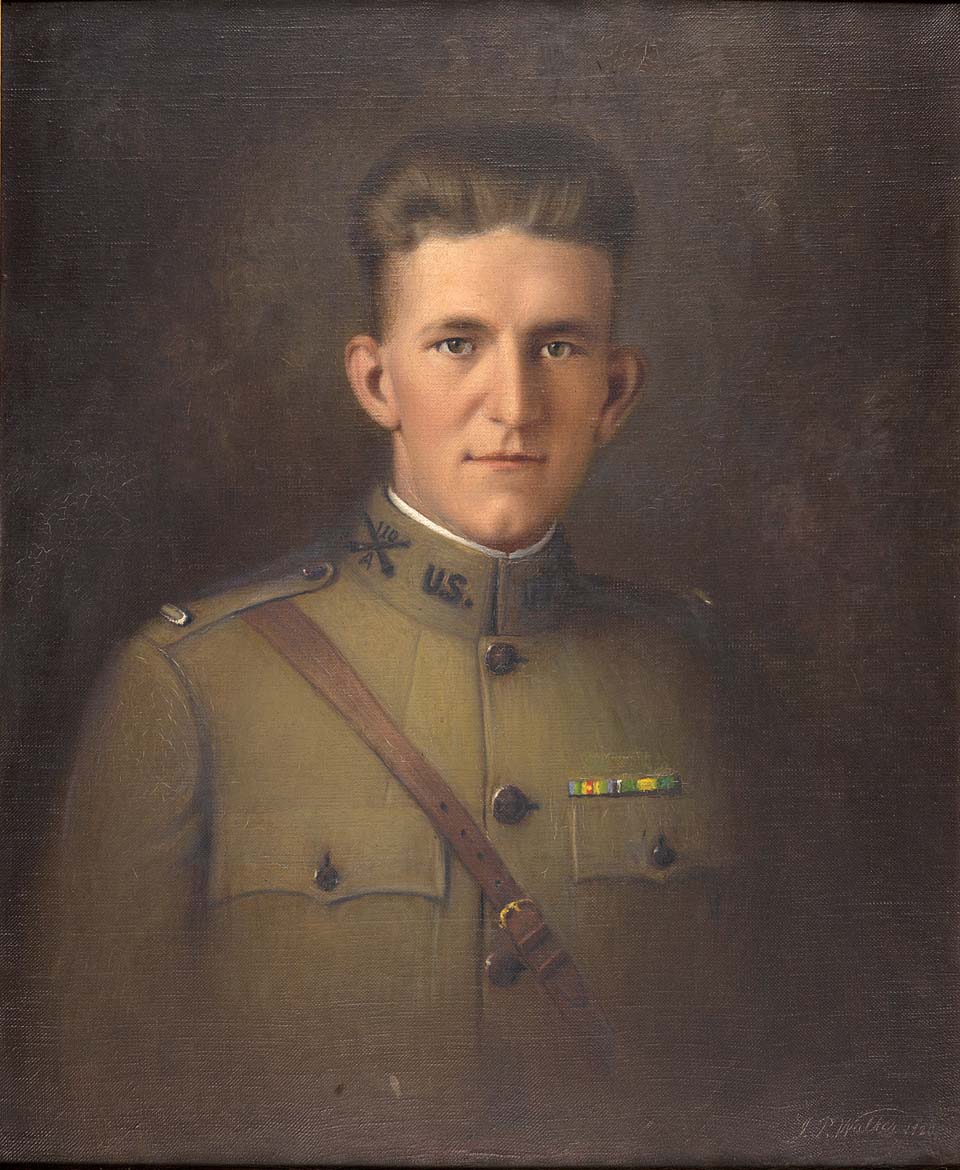 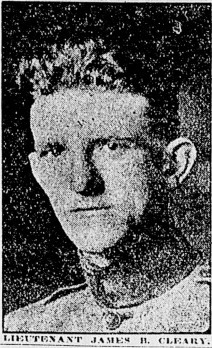 Combined with the correspondence of rank, unit, and dates, the striking visual similarity of Lt. Cleary to the unidentified lieutenant suggests a match.

Now that I had a name, it was time to see what else I could learn using the Library’s collections. One of the richest resources available is the collection of questionnaires from the War History Commission, created by Gov. Westmoreland Davis in 1919 to document Virginia’s participation in the “Great War.” Its printed questionnaire was sent to veterans or their surviving family members to assess both the facts of their service and the effect it had on their lives. The questionnaires are available through a searchable database through the Library’s website.

Lt. Cleary’s questionnaire was completed by his father and is a detailed guide to a short life. James Bernard Cleary was born 9 January 1897 in Richmond, the only child of Bernard and Theresa Walsh Cleary. He was educated at St. Peter’s Academy, which stood approximately where the Library is today at 9th and Marshall, and then worked for American Locomotive Works in Shockoe Valley. He began his service with the Richmond Howitzers in 1912, and after the United States joined World War I in 1917 he trained at Fort Oglethorpe and Camp McClellan. His time in the war itself was brief; he arrived in France in July 1918, was gassed on patrol in August 1918, and died on 20 September  1918 of a combination of influenza, trench mouth, and pneumonia. He was buried in the Meucon Cemetery in France two days later.

The War History Commission files at the Library also contain a copy of a letter sent from Lt. Cleary to his father shortly before his final patrol. Cleary wrote optimistically about “the strong, determined, close-shaved, clear-eyed, fresh, khaki-clad, American boys with a devilish, care-free air,” who he felt would end the war within 12 months. This letter is the only document we have with Cleary’s own views on his service, and the letter and questionnaire together paint a poignant image of the impact the war had on one local family. We know from later pieces in the Richmond Times-Dispatch that Bernard Cleary petitioned the War Department to repatriate the bodies of service members buried in France, and, indeed, the initial article I came across in Virginia Chronicle described Lt. Cleary’s final interment in Richmond’s Mount Calvary Cemetery.

While we have not been able to pinpoint why or how the portrait of Lt. Cleary came into the commonwealth’s collection, there are still resources at the Library to explore. It seems possible that the portrait was either a gift from the Richmond Howitzers, or from Theresa Cleary’s brother, who worked for the Senate for many years. As the portrait dates to 1920 (and includes the ribbon for a posthumous WWI Victory Medal), it may well have been done to coincide with Lt. Cleary’s reburial in September 1920. However the portrait came to the Library, our work in identifying its subject has fulfilled Bernard Cleary’s exhortation in the War History Questionnaire: “Let those of you whose task it is, see to it that his name be not forgotten.”