The Mystic Chords of Memory: The Payne Family of Frederick County

It’s often repeated that “those who cannot remember the past are condemned to repeat it.”1 I’m starting to think I misunderstood that quote. It seems to be less about the literal repetition of an act, as I once believed, and more about repetition of evaluation. In other words, we react as if it were the first time every time.  Winston Churchill warned that this would usher in “the most thoughtless of ages. Every day headlines and short views.”2

While processing different types of records, archivists often come across something that ties the past a bit closer to the present. It might be a graphic description of an adulterous affair in a nineteenth century court document that would make Perez Hilton blush, or a rant on bureaucratic red tape from early twentieth century governor’s correspondence that still rings true today. It is both surprising and oddly reassuring to read a historical document with subject matter that could have been pulled from today’s headlines. The story of the Payne family is just such a tale.

Joseph E. Payne, a prosperous Frederick County farmer, and his wife, Sarah, had eight daughters. The Paynes were one of the oldest families in the area and, according to some newspaper accounts, well respected. Joseph’s death in 1864 and the post-war economy struck a financial blow to the family. While several sisters married prominent local men, one sister, Lydia Rebecca (known as Rebecca), was left to play the role of breadwinner and shoulder the burden of the family farm. After a rapid but successful stint in the female seminary near Martinsburg (possibly the Norbourn Female Seminary), Rebecca returned to the farm, “donned a felt hat, looser clothes” and worked as competently and energetically as the best farm hand. Known for her shrewdness in stock trading, Rebecca gradually replaced the common livestock of the Payne farm with top-notch breeds like Merino sheep, blooded horses, and Berkshire hogs.

Not satisfied with simply managing the farm, Rebecca also persuaded the federal government to locate a post office on the property, which was at a spot called The Rest about halfway between Martinsburg and Winchester. Rebecca, of course, would be its postmistress. She also opened a store on the farm to serve the local neighborhood. Miss Sarah Hinton was hired to assist in the operation of both the post office and store. 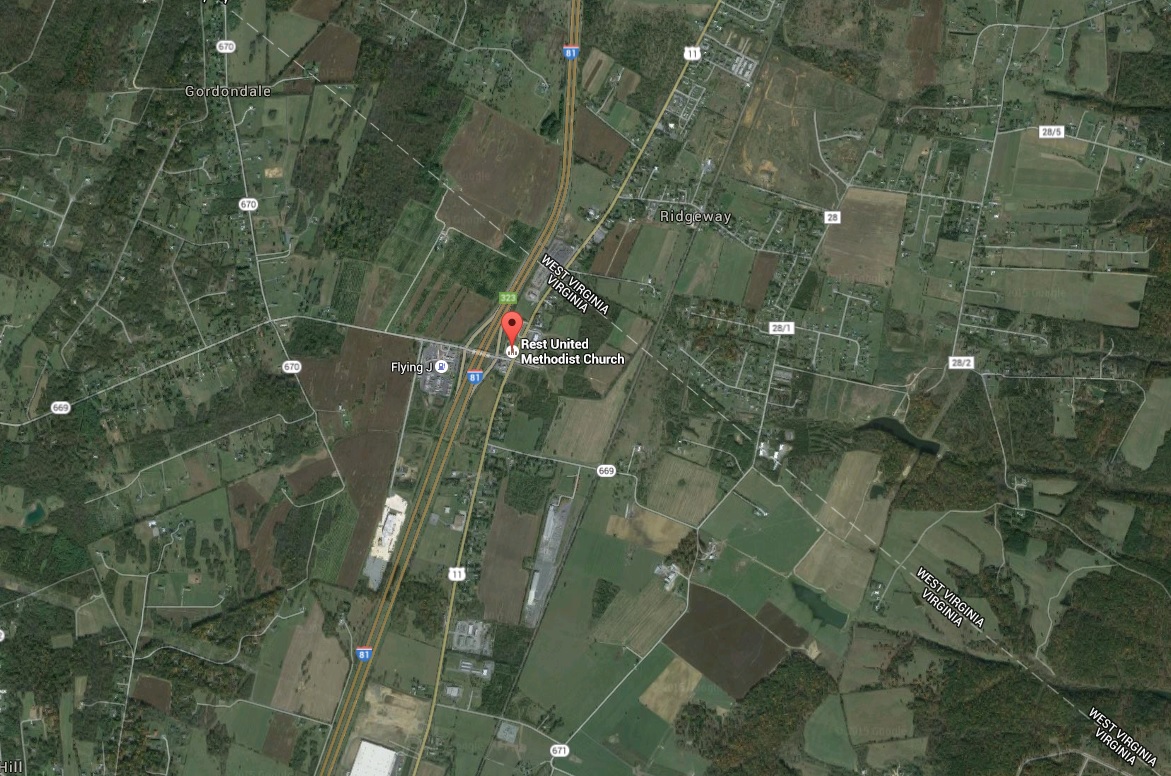 Approximate location of The Rest.

Five of the sisters, a brother-in-law, and their mother lived under one roof in the family home, laboring in one manner or another to support themselves. Postal work and managing the retail goods often kept Rebecca at the store overnight, along with Miss Hinton, who roomed there. Life carried on and the Payne family’s conditions, thanks to their hard work, gradually changed for the better. 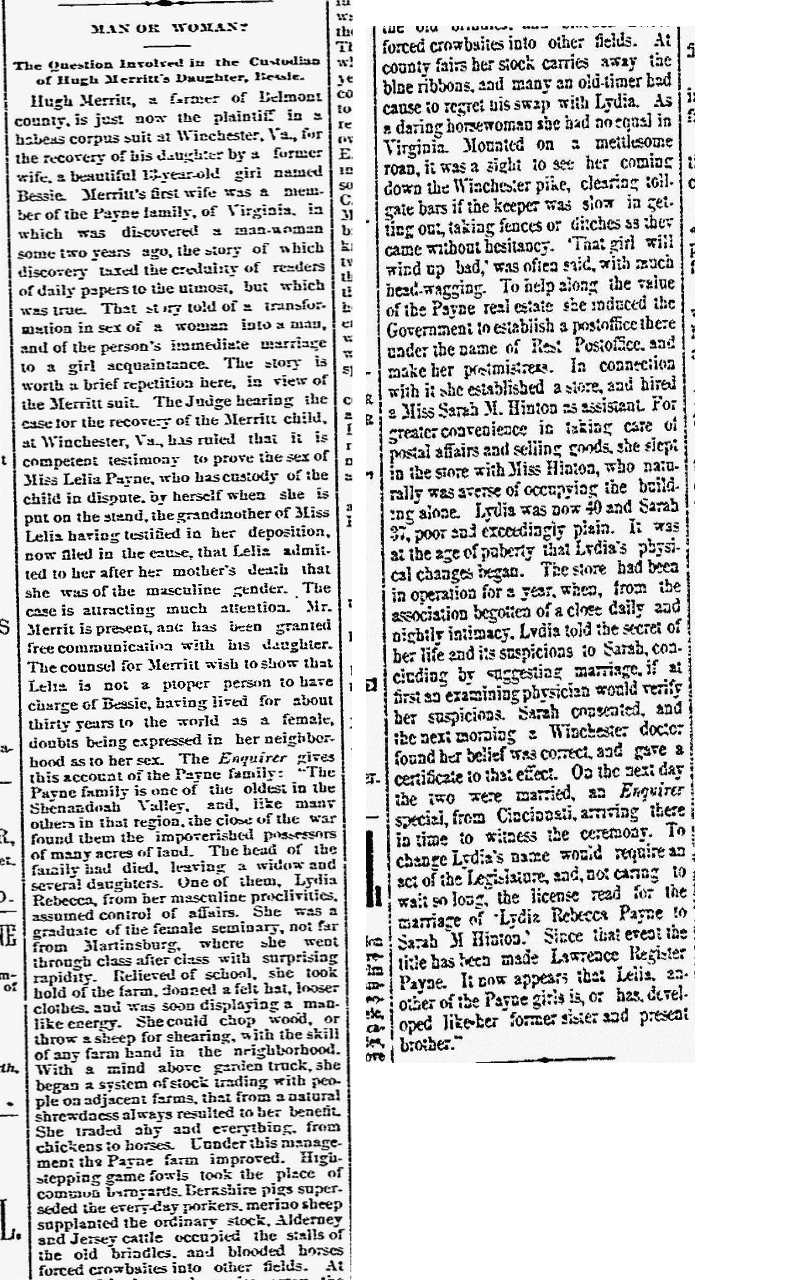 It caused a great sensation around Winchester when, in early 1884, Rebecca arrived at the Frederick County courthouse to request a license to marry her close associate Miss Hinton. This was refused on the grounds that two women could not marry. According to newspaper accounts, Rebecca was undeterred and returned shortly thereafter sporting a short haircut and male attire, again requesting a license to marry Miss Hinton. No Virginia marriage record exists for the couple. However, in a marriage license book for Berkeley County, West Virginia, there is a license dated 24 January 1884, issued for Lydia R. Payne and Sarah M. Hinton. Whether this allowance can be attributed to the Payne family’s influence in the county, a sympathetic clerk, or some other means is unclear. What is clear is that the couple quickly married in Martinsburg, West Virginia, in the Southern Methodist Congregation Church (purportedly officiated by the former chaplain of General J.E.B. Stuart’s cavalry).

Lydia Rebecca Payne returned to the Frederick County courthouse in March 1884 bearing a petition to legally change her name to Lawrence Register Payne, backing her appeal with testimony from Dr. W. P. McGuire. The court granted the name change based on McGuire’s medical expertise. Again, clarity becomes an issue as the petition is very brief, stating only that “the applicant is of the male sex.” An article in the Ottawa Daily Republic on 28 January 1884 contended that Dr. McGuire and a Dr. Love had performed “a simple and perilous operation” on Payne and assured their patient “that there could be no doubt as to his perfect masculinity.”

Community acceptance of Payne is difficult to gauge. The newspaper accounts, many of which are reprints of the same article, describe the transformation as astonishing and the topic of much local chatter. The Payne family was again the object of Winchester’s gossip, and for similar reasons, when a former brother-in-law brought a habeas corpus suit against Jacob Swimley and Mary Payne Swimley in 1885 for custody of his daughter, Sarah Elizabeth Virginia Merritt, known as Bessie.3

Bessie had come to live with her aunts and grandmother in Virginia when her mother, Sarah Payne Merritt, died shortly after her birth in 1872. Following the death of her grandmother, Sarah A. C. Payne, in March 1885, Bessie’s father attempted to return her to his home in Ohio where he lived with a new wife and Bessie’s older brother and sister. The Payne family balked, suspecting that Merritt was attempting to assert his control over Bessie’s modest inheritance from her grandmother. According to them, Merritt had been anything but a doting father, visiting Bessie only a few times in the twelve years since her birth.

Perhaps as a response to accusations made about the character of his second wife or perhaps out of legitimate paternal concern, Merritt attempted to paint the Payne household as unfit for his daughter. He lodged accusations against Lelia Payne, another of the sisters, contending that she too was more male than female and had spent nights sleeping in the same bed as Bessie, something he deemed inappropriate. He even obtained a deposition from “old” Jane Payne, Sarah A. C. Payne’s octogenarian mother, asserting that Lelia confided in Jane about her gender during Sarah’s illness. 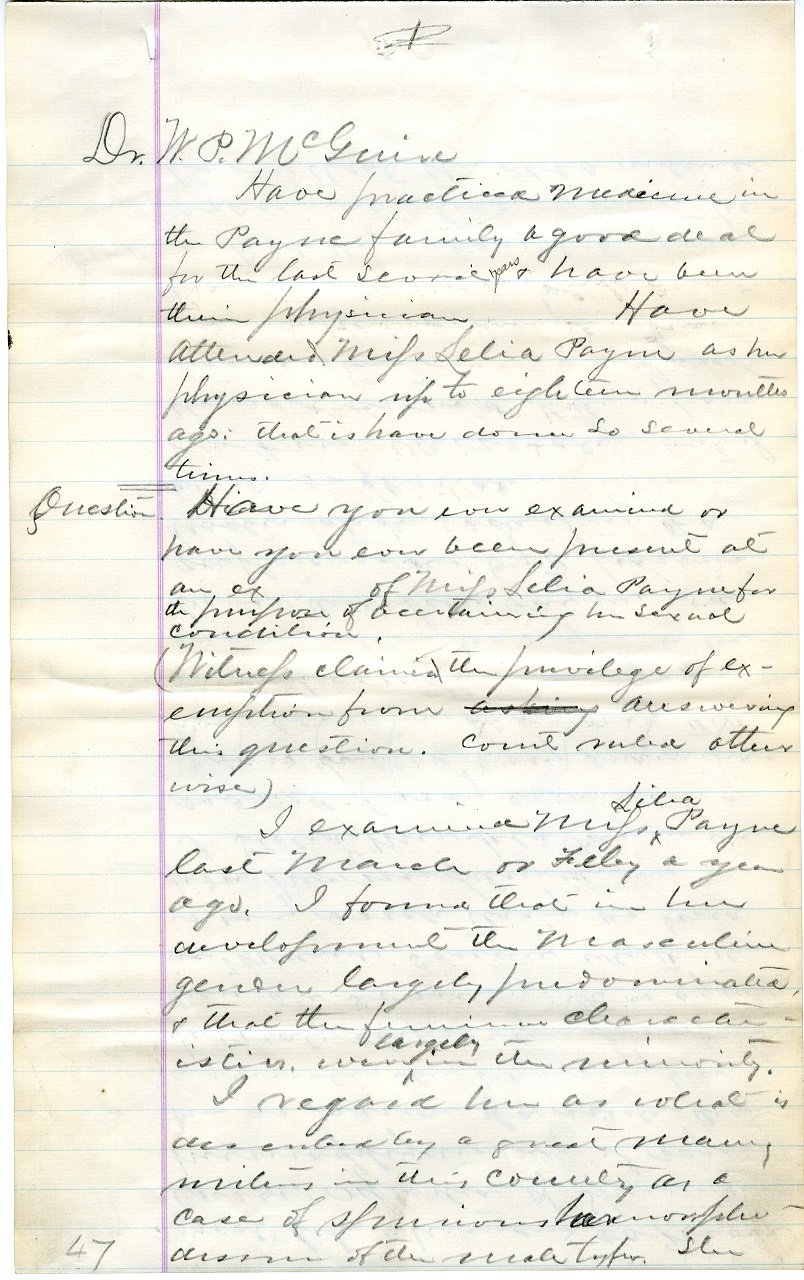 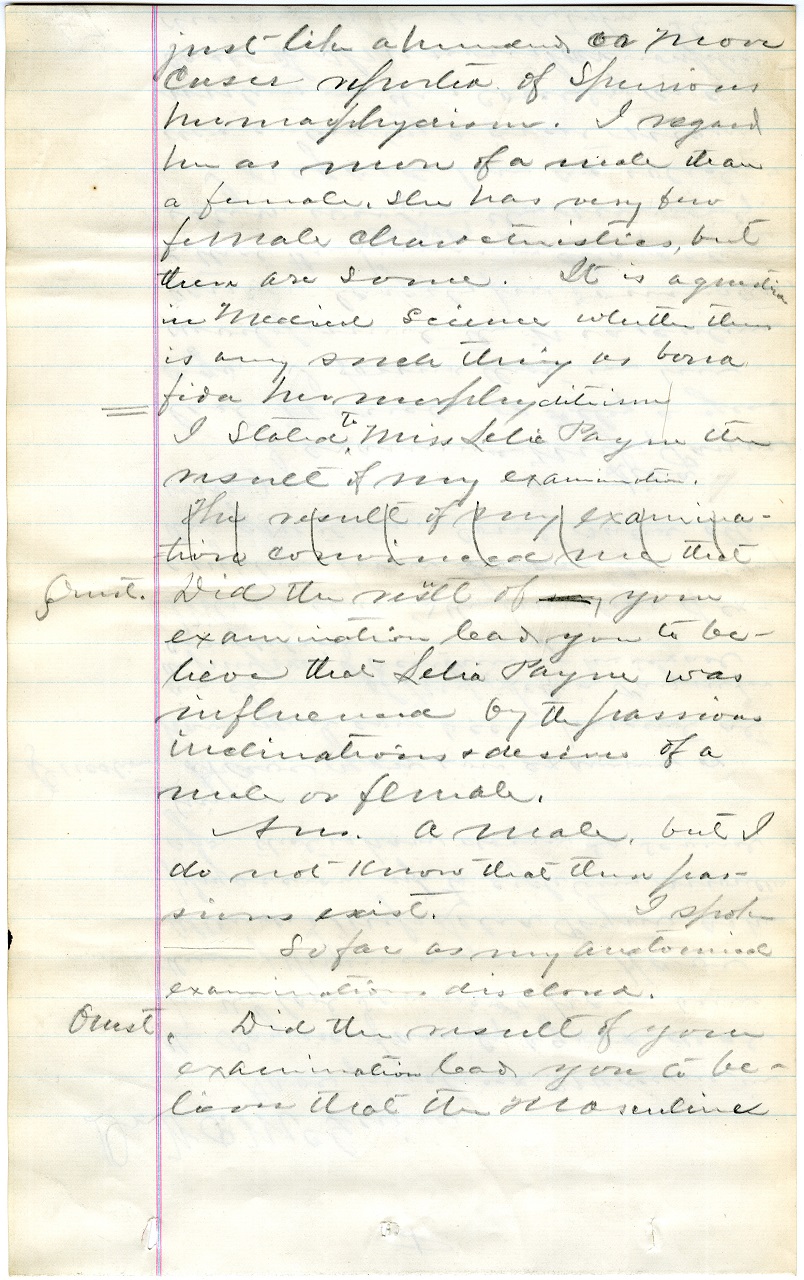 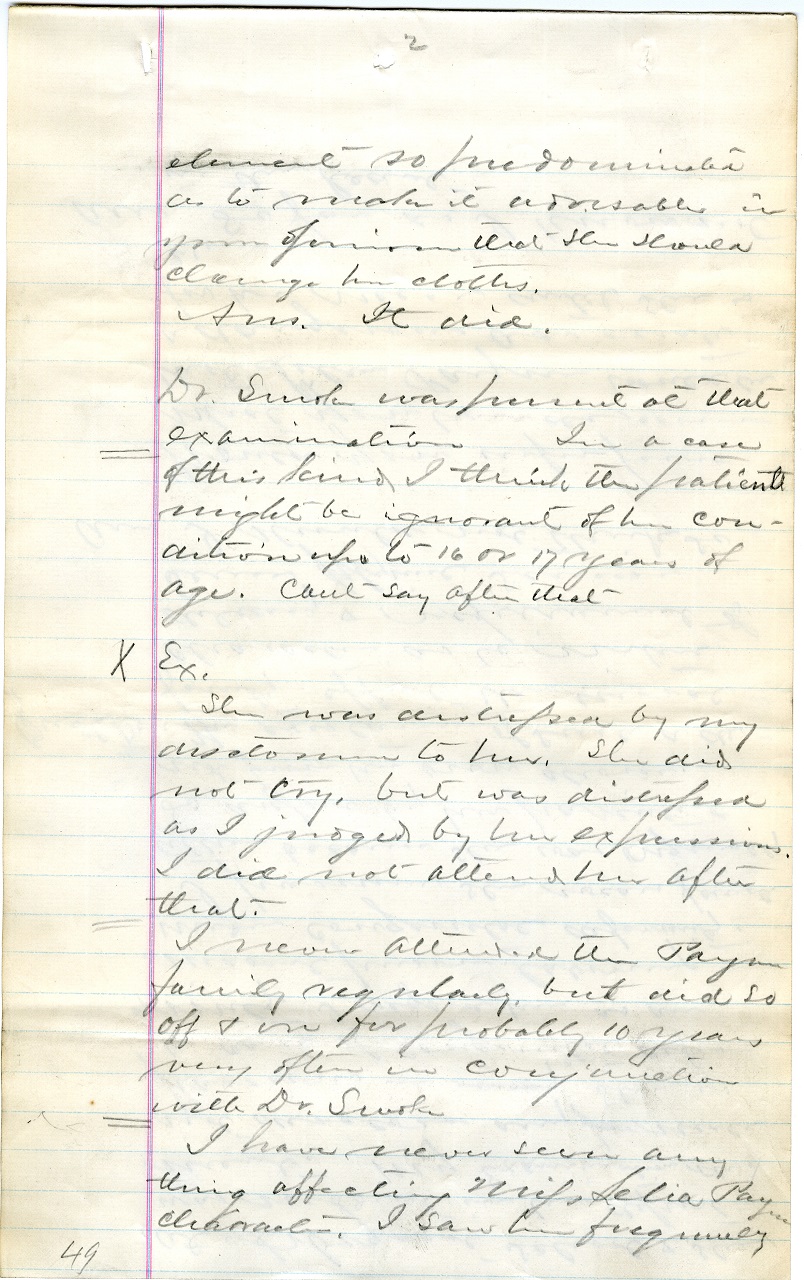 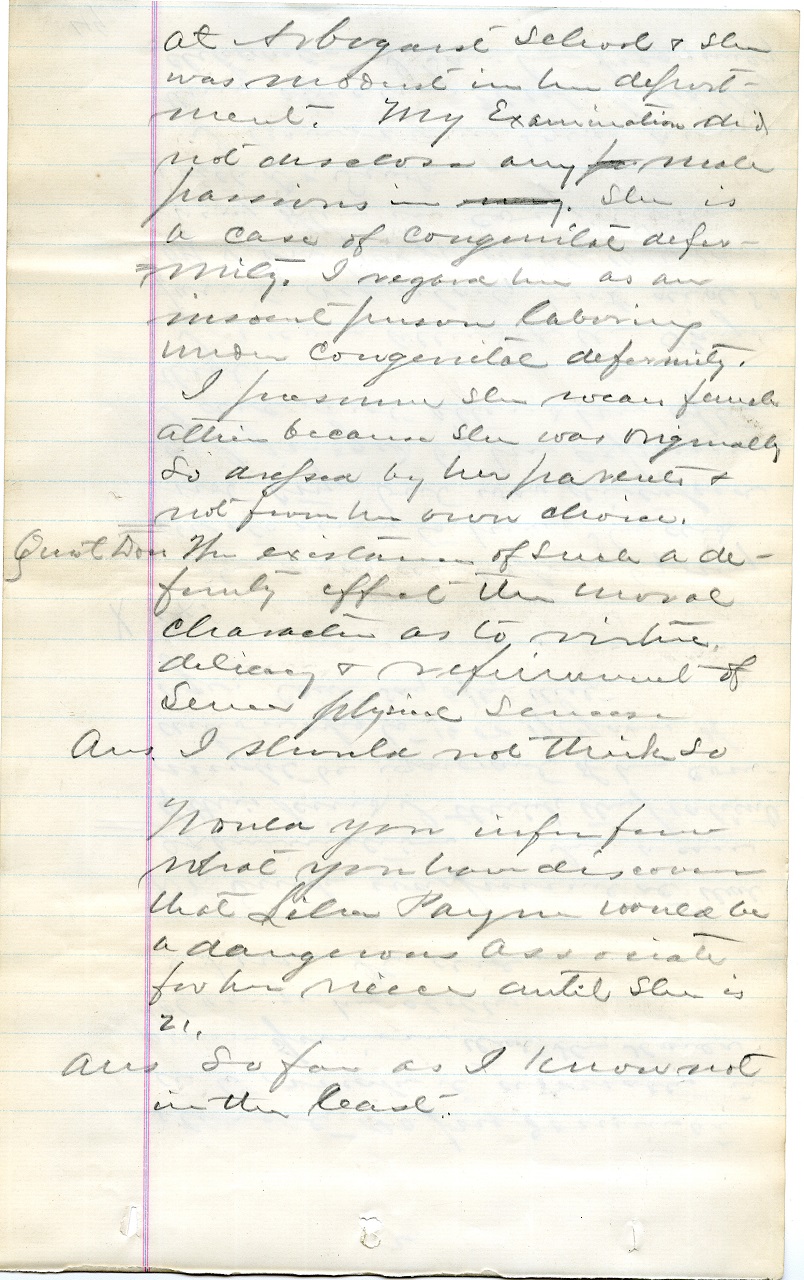 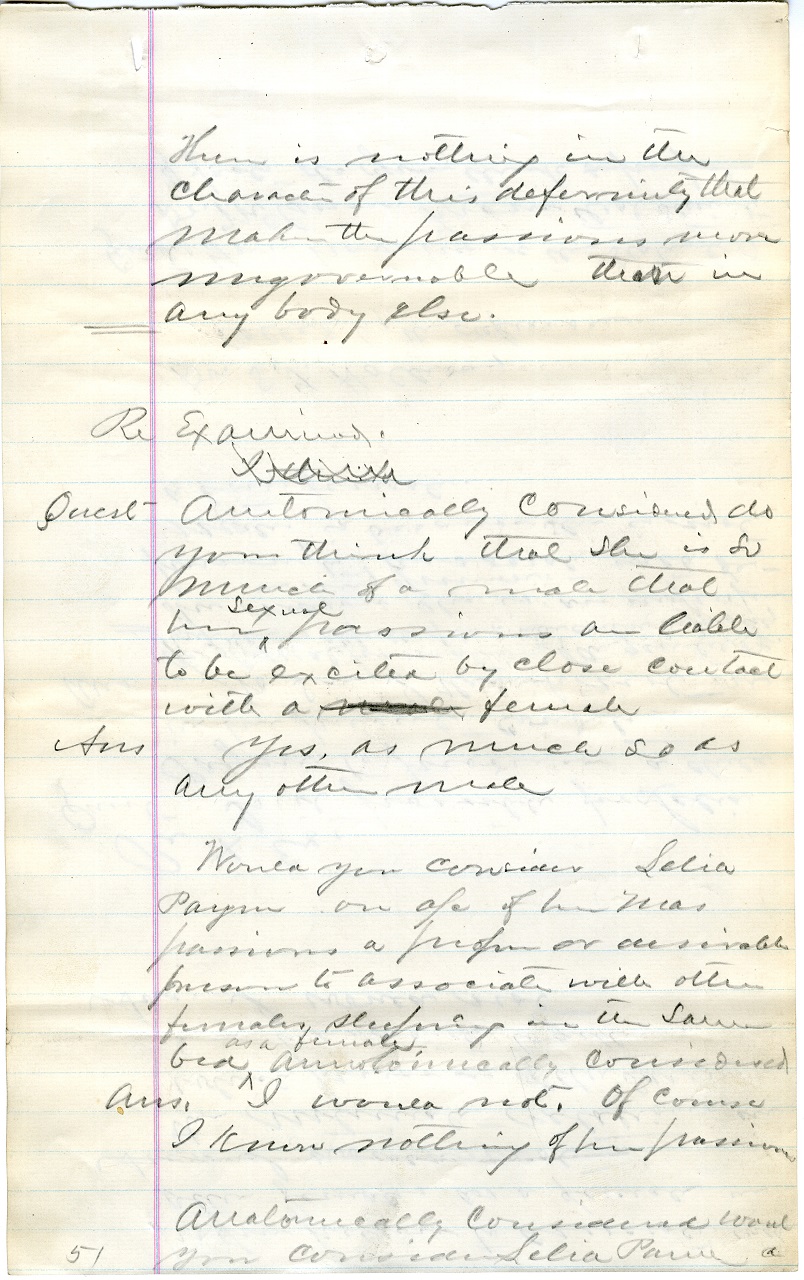 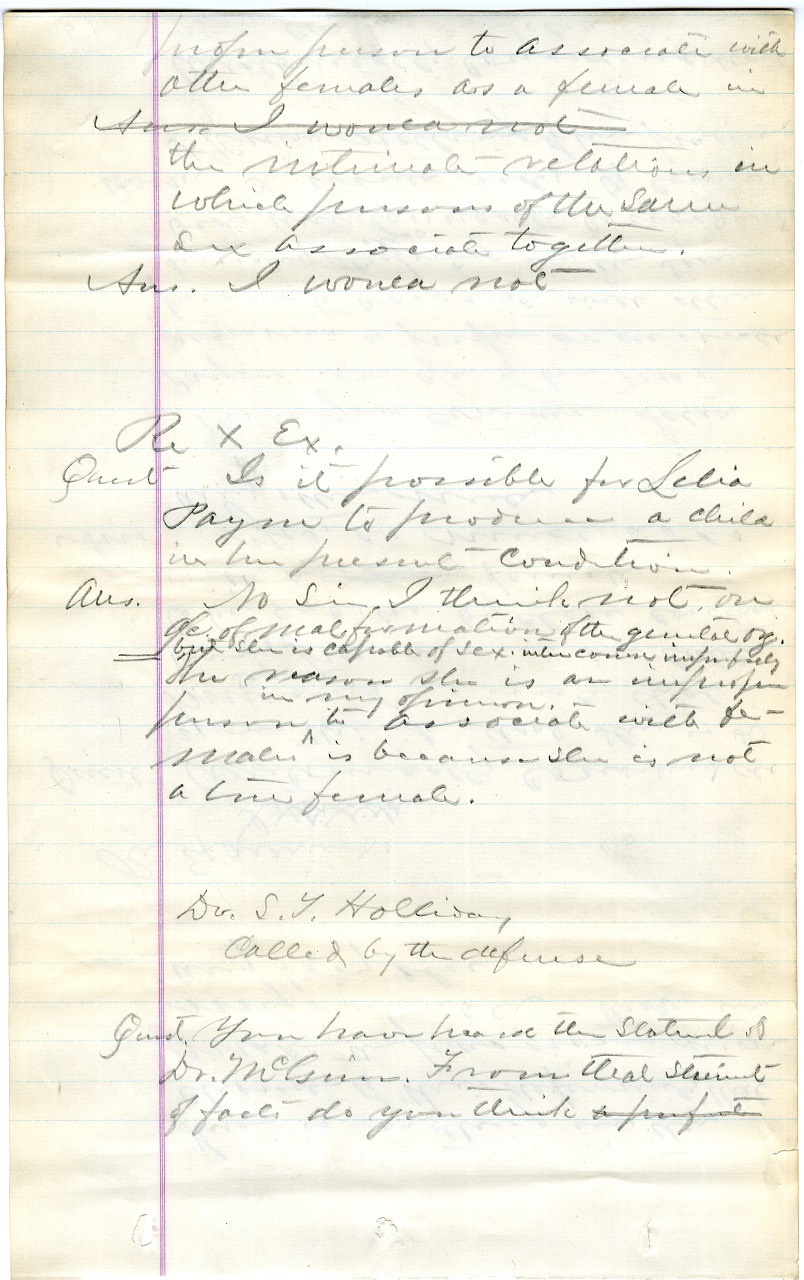 Dr. McGuire was again deposed along with Dr. E. B. Smoke, another Payne brother-in-law, regarding their examination of Lelia. Through their testimony, we also gain some possible insight into Lawrence’s condition. Dr. McGuire refers to Lelia as a “spurious hermaphrodite,” a medical condition caused by incomplete genital formation during gestation. Development is such that at birth the child could be visually mistaken for the opposite sex. It seems in the case of the Payne sisters, Rebecca and Lelia, they were judged at birth to be female and raised accordingly. In her deposition, Lelia flatly denied her grandmother’s story about confiding in her. After much back and forth in the doctors’ depositions regarding her “passions” (note they never asked Lelia directly about her “passions”) and what was and was not proper association, she was at last deemed to be above any moral reproach. Hugh Merritt’s writ was denied, and Bessie remained with the Paynes.

Lelia continued to live as a woman, never marrying, and living out her final years as a boarding house owner (and occasional bootlegger) in Brunswick, Maryland, with her sister Anna T. Payne. Lawrence R. Payne retired from the store and farm and attempted to become a lecturer on the livestock trade; a contemporary newspaper account contended that “there is millions in it.” However, his first engagement at Hagerstown, Maryland, saw no ticket sales and ended in failure. It seems that he returned to The Rest and the mercantile trade, living out his years there with Sarah and an adopted daughter, Mabel. Lawrence Register Payne died of pneumonia in 1926 at the age of 78; Sarah had died one year earlier.

As an interesting aside, the informant for Lawrence’s death certificate was a Mr. C. E. Ridgeway, who, it turns out, was the man who married little Bessie Merritt. She went on to have 9 children, including one named Ruth Rebecca, and lived to the age of 101. 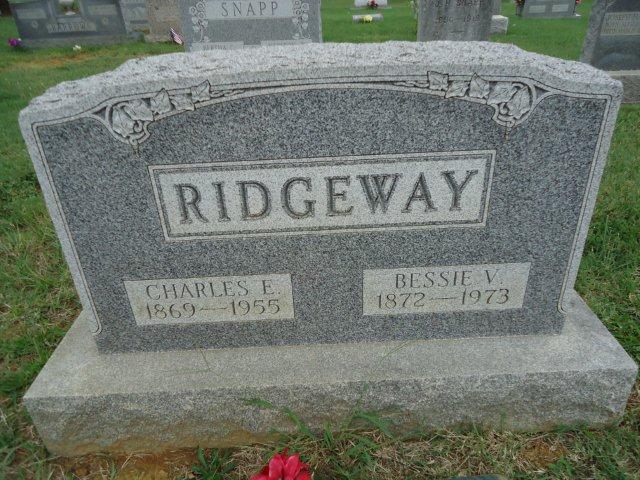 It is stories from the past like the saga of the Payne family that help to put our times in context. We can often turn to the experiences of our forbearers to learn a little something about ourselves. It seems that nearly every day, as I make my way through the pages of history, I am reminded that there is nothing new under the sun.