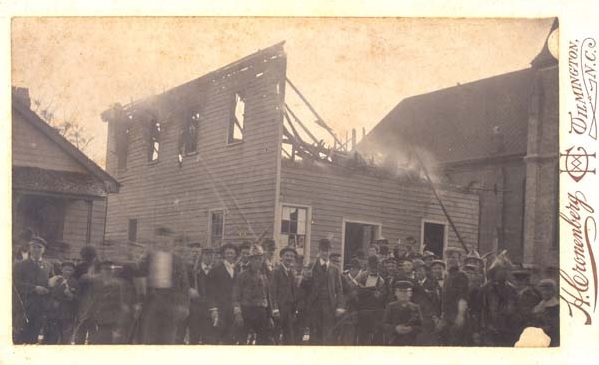 On November 10, 1898, in response to the election of a biracial Fusionist government, a group of white Democrats in Wilmington, North Carolina organized a mob, attacking the city’s African American community and ultimately overthrowing the city’s government. Within a couple of days, the mob had killed between 15 to 60 African Americans, destroyed the office of the Daily Record, Wilmington’s black newspaper, and run its editor out of town. 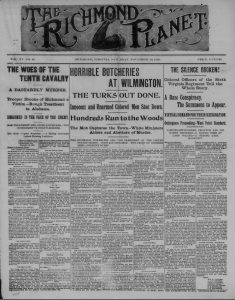 It had also succeeded in enacting the only coup d’etat in American history. Despite the mob’s complete chaotic defiance of the law, little was done by governmental authorities to quell the violence, with President McKinley ignoring pleas for assistance. Unsurprisingly, the Richmond Planet covered the events in Wilmington extensively. With headlines such as “Horrible Butcheries at Wilmington–the Turks out done,” the Planet decried the racialized violence of the mob and lambasted the government for its failure to respond.

The Richmond Planet, as an African American newspaper, offers a unique and valuable perspective on the 1898 Wilmington insurrections, as much of the mob’s animosity was directed toward Wilmington’s black newspaper, the Daily Record. Prior to the 1898 elections, significant tension had been building between the Daily Record and the white media of North Carolina, particularly the Raleigh News & Observer, over the issue of sexual relationships between black men and white women. The white media had engaged in a propogandic panic that black men were sexually predatory toward white women, a common assertion by white supremacists that had dangerous repercussions for black men, who were frequently lynched due to false accusations of sexual assault. 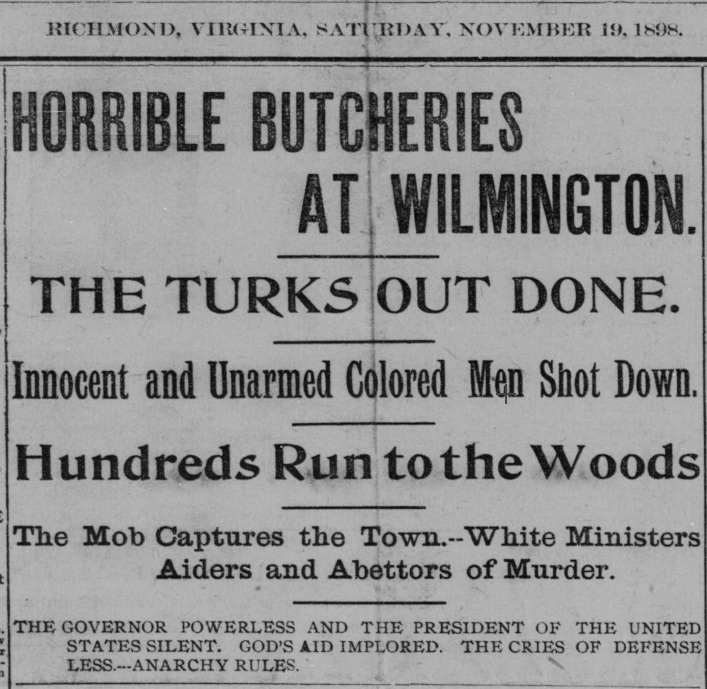 Alex Manly, the editor of the Daily Record, responded to these inflammatory assertions by stating that when sexual relationships between white women and black men did exist, they were consensual. His opponents reacted with violent outrage, many calling for his lynching, such as Mrs. W. H. Felton, who stated, “When the negro Manly attributed the crime of rape to lewd intimacy between negro men and white women of the south, the slanderer should be made to fear a lyncher’s rope rather than occupy a place in newspapers.”

The mob in front of the destroyed Daily Record building. From abhmuseum.org.

The Wilmington insurrection began with an attack on the Daily Record. On November 10, 1898, a mob of approximately 2,000 white men burnt the Daily Record newspaper office to the ground, posing for photographs amidst the rubble before embarking on a spree of murder and destruction throughout Wilmington’s black neighborhood. Manly was unharmed, having fled the city prior to the attack.

Due to the animosity directed towards him, Manly was scapegoated for the insurrection. John Mitchell, Jr. vehemently denounced this accusation of culpability in the Richmond Planet, saying on November 26, 1898, “There was no excuse for it and the only plea in justification is that some other man who was not found and who was not killed had written an objectionable article and published it in his journal three months before…” He went on to say, “Could a plea be more absurd? Could an excuse be more preposterous?” Likewise, on November 19, 1898, Mitchell said, “Editor Manly wrote an objectionable editorial in the DAILY RECORD at Wilmington, N. C., and the murderous mob killed twenty-five colored folks who did not write it, neither did they know anything about who wrote it. And yet some folks would attempt to justify the murders.”

Interestingly, although Mitchell defended Manly, he also criticized him for fleeing. While Mitchell found it absurd to blame Manly for the outbreak of racial violence, he censured Manly for his failure to enact a “manly protest.”

In an editorial appearing in the Planet on November 12, 1898, Mitchell wrote, “For our part, we would not leave.” He continued, saying, “When we buy presses and pay for them, we will make our bed in our office and dig a trench in the cellar where our body may rest after we have been murdered by the lawless elements who escape the effect of our repeating rifle.”