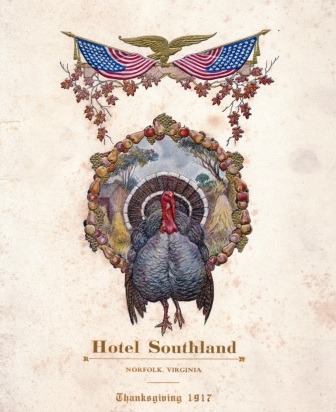 "We Give Thanks for Thanksgiving" 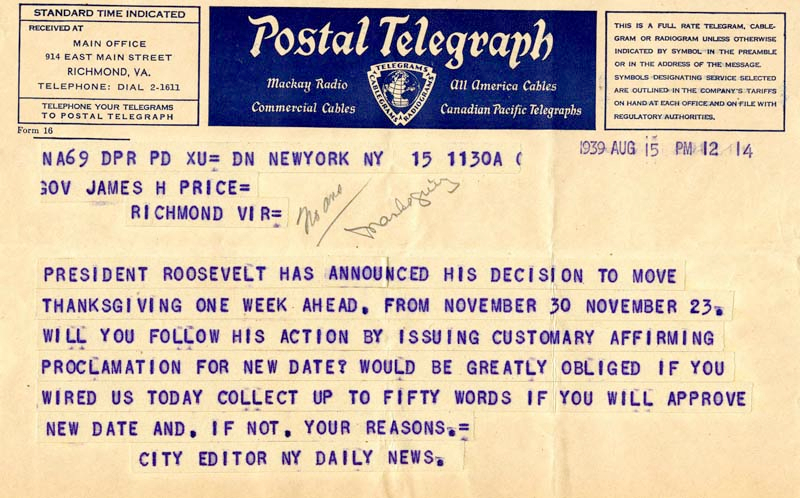 It was under President Abraham Lincoln that the day became a true federal holiday; Lincoln was prompted by a series of editorials and letters written by Sarah Josepha Hale to proclaim the final Thursday in November 1863 as the national Thanksgiving Day.

In the years following 1863, presidents followed Lincoln’s example and proclaimed the final Thursday of November as Thanksgiving Day. State governors would also issue Thanksgiving proclamations for their individual states. The Library of Virginia has several examples of proclamation issued by Governors McKinney, O’Ferrall, and Tyler between 1893 and 1898. In these proclamations, governors encouraged citizens to gather with their friends and families, do “some good deed,” and to help those less fortunate by “brining comfort and happiness to homes and hearts that have been darkened by adversity.” The governors reference national events such as the Spanish-American War and the Panic of 1896, praising the “wonderful courage and firmness” of Virginians in dealing with these troubling events. Governor O’Ferrall also noted pointedly in his 1896 Proclamation that Virginia’s state government business “has been conducted by its accredited agents without scandal or suspicion of wrong-doing in any department.” 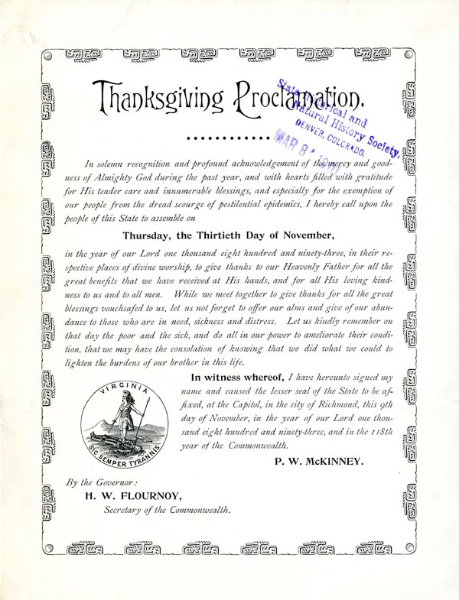 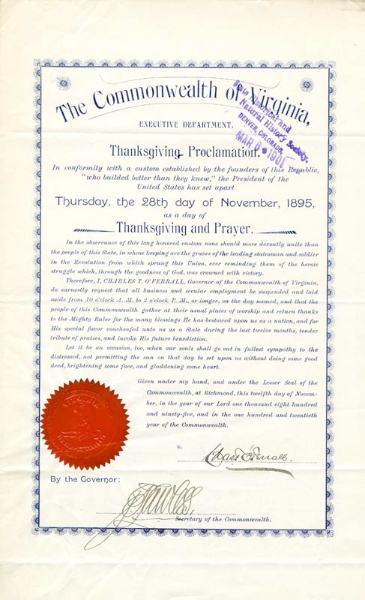 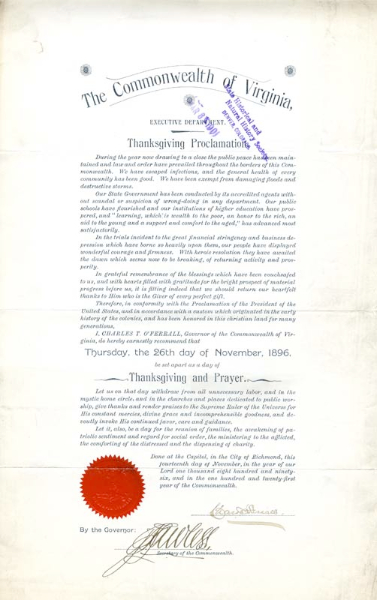 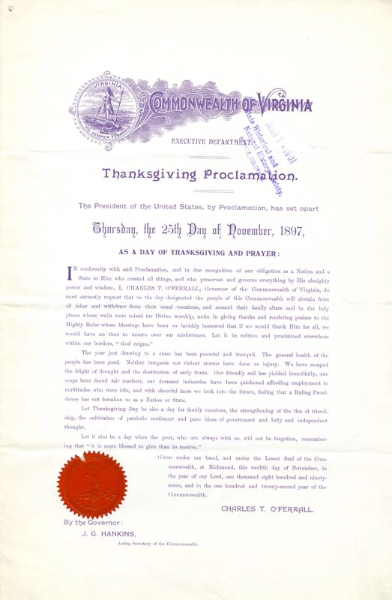 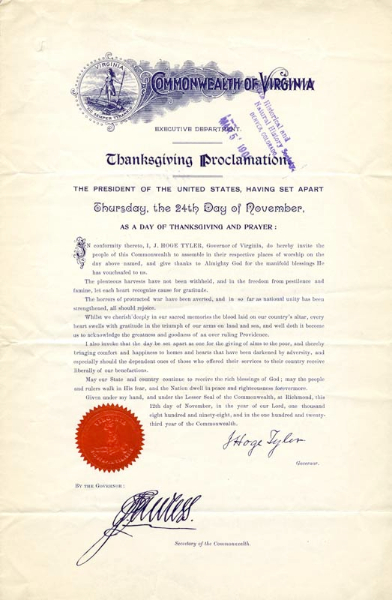 The governors of Virginia, and of other states, issued their Thanksgiving proclamations using the same date as the presidential proclamation, although they were under no obligation to do so. This changed in 1939, when President Franklin Roosevelt rocked by the boat by proclaiming that Thanksgiving would fall on the second-to-last Thursday rather than the traditional final Thursday of November. November had five Thursdays that year, and Roosevelt hoped that using 23 November rather than 30 November would lengthen the Christmas shopping season and provide a boost to business still fighting their way out of the Great Depression.

This decision seems innocuous enough looking back, but it caused a great deal of controversy at the time. Calendar makers, for example, were outraged, since the change impacted two years’ worth of already printed materials. The mayor of Atlantic City, Thomas D. Taggart, Jr., derisively referred to the newly proclaimed holiday as “Franksgiving.” In the face of popular displeasure, many governors chose not to follow the president’s example, issuing proclamations that adhered to the traditional final-Thursday format. Ultimately, 23 states followed Roosevelt’s example, including Virginia, while 23 states celebrated Thanksgiving a week later on 30 November. Colorado and Texas chose to honor both dates—which really seems like the ideal solution, because who wouldn’t want twice as much turkey and stuffing? 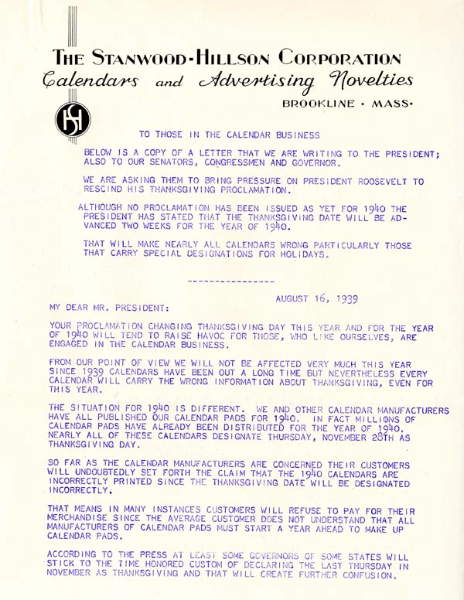 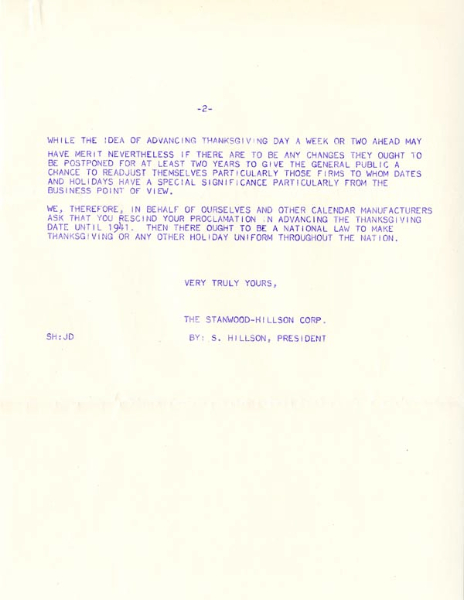 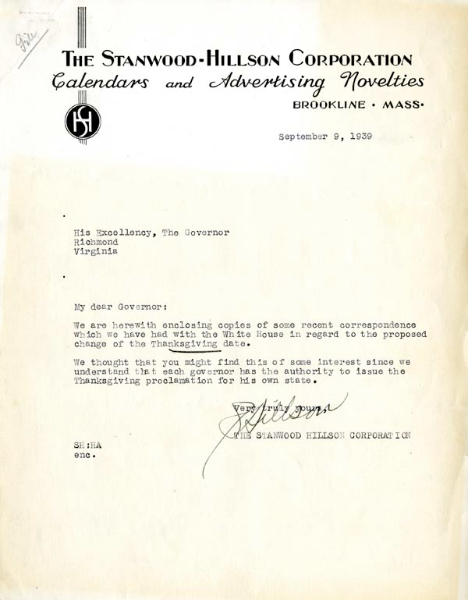 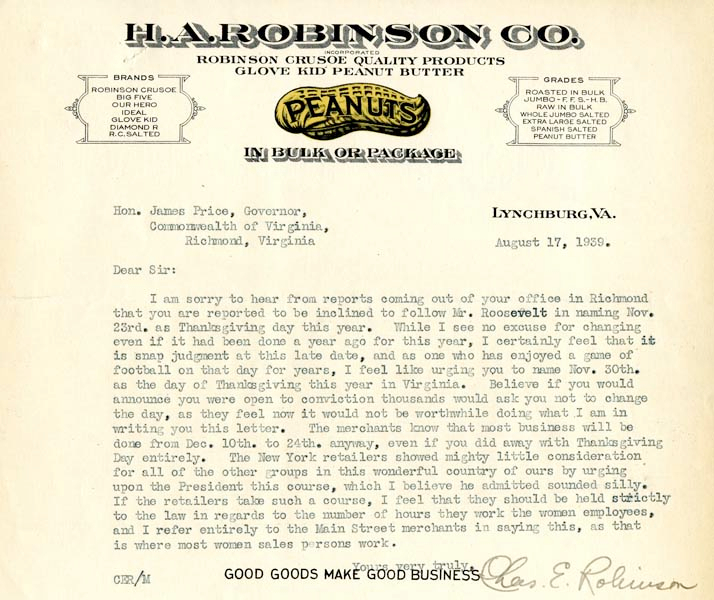 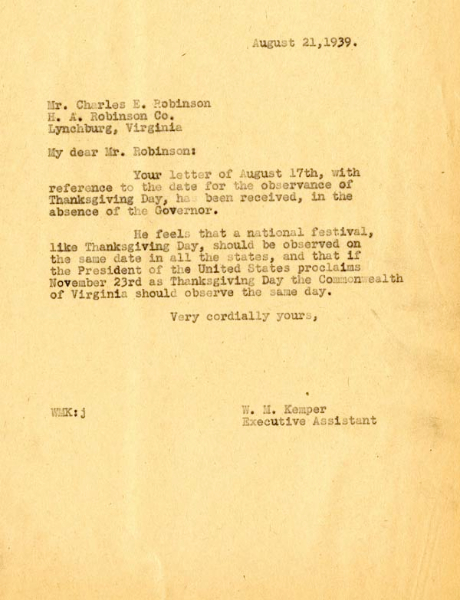 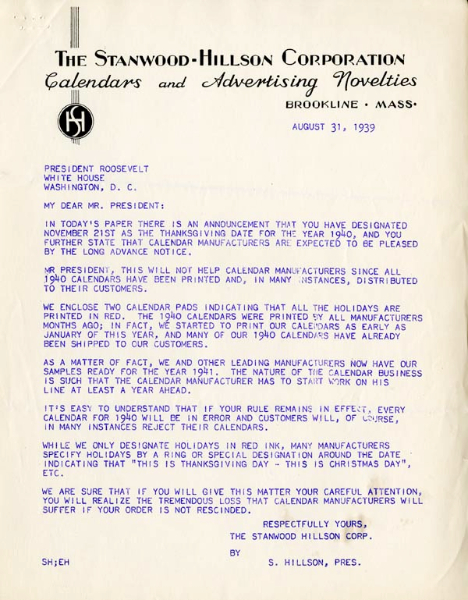 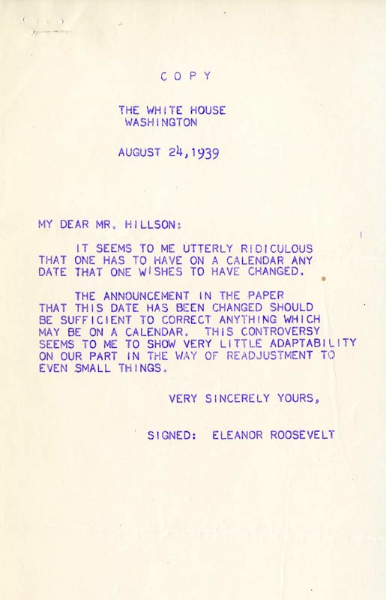 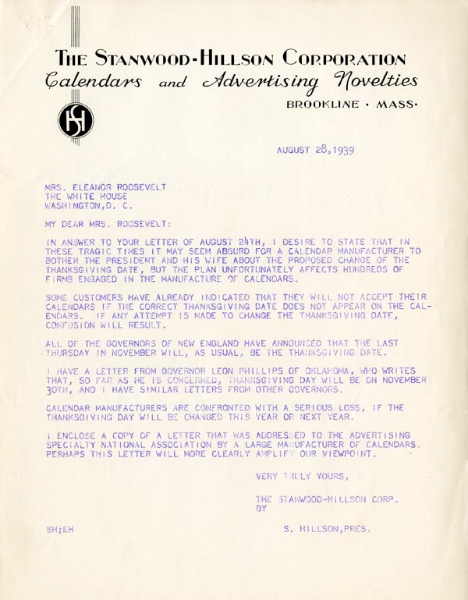 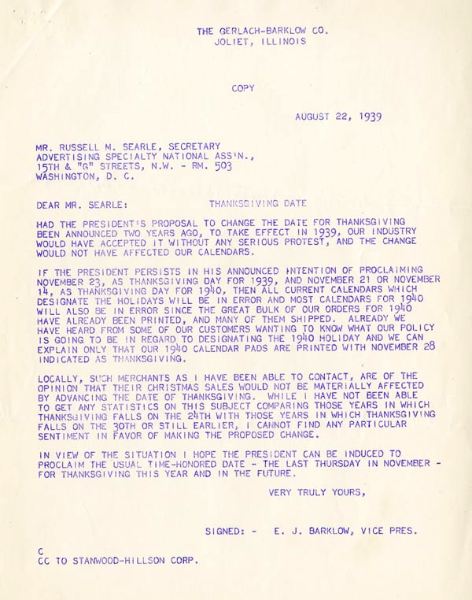 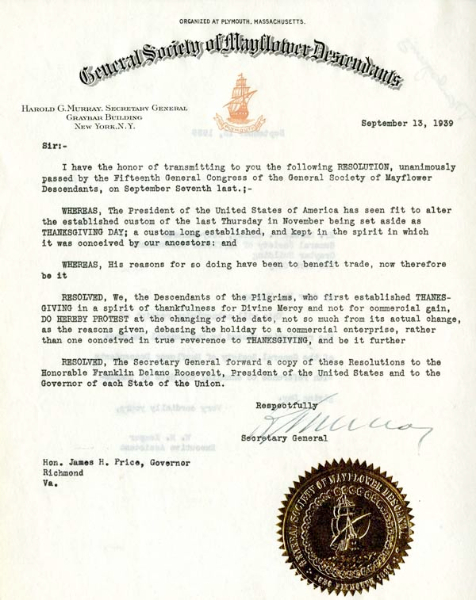 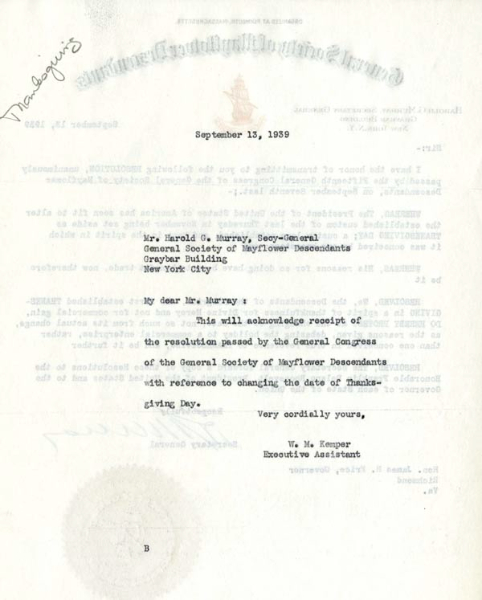 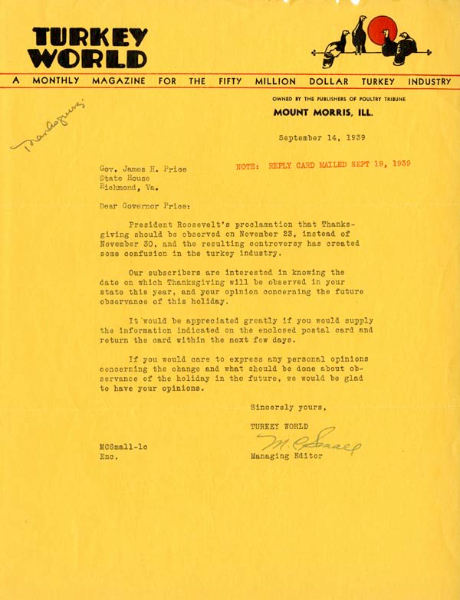 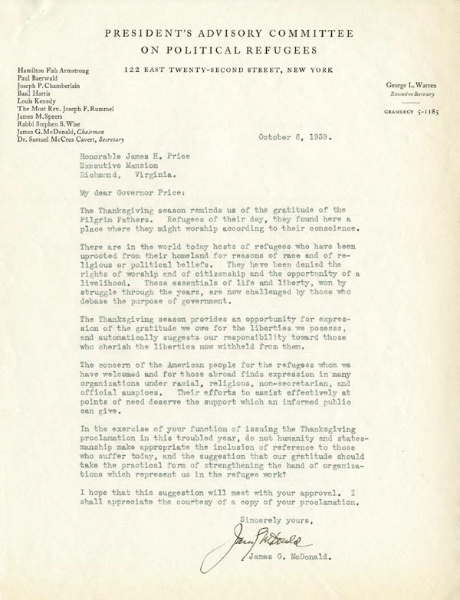 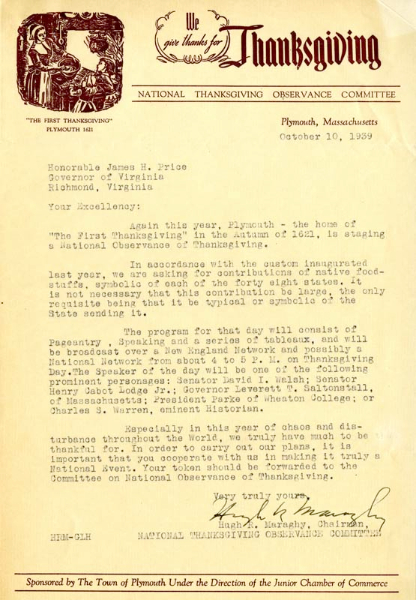 The issue was resolved a few years later, when President Roosevelt signed a bill on 26 December 1941 that fixed the fourth Thursday of November as the date of Thanksgiving, making the issue a matter of federal law for the first time. However, some states still resisted this; as late as 1956, Texas celebrated Thanksgiving on the last Thursday of a November with five Thursdays.