Published weekly in Richmond, Virginia, from 1893 through at least 1899, save for a five-month period in 1896, the Jewish South professed itself “a journal devoted to the interests of Judaism.” Being one of few publications concerning the Jewish community in the South, it reported on events in Richmond and on those of neighboring counties in Virginia including Norfolk, Staunton, and Petersburg. Published every Friday, the Jewish South returned in January 1897 in “new dress” with updated printing and improved layout features. In its latter years the newspaper expanded reporting to include news of interest from around the world including Siberia, Tunis, France, Germany, Italy, and Mexico.

During its first year, the Jewish South gained recognition and praise from prominent figures and more established newspapers. It was edited by Herbert T. Ezekiel, supervisor of printing for the city of Richmond for 19 years. 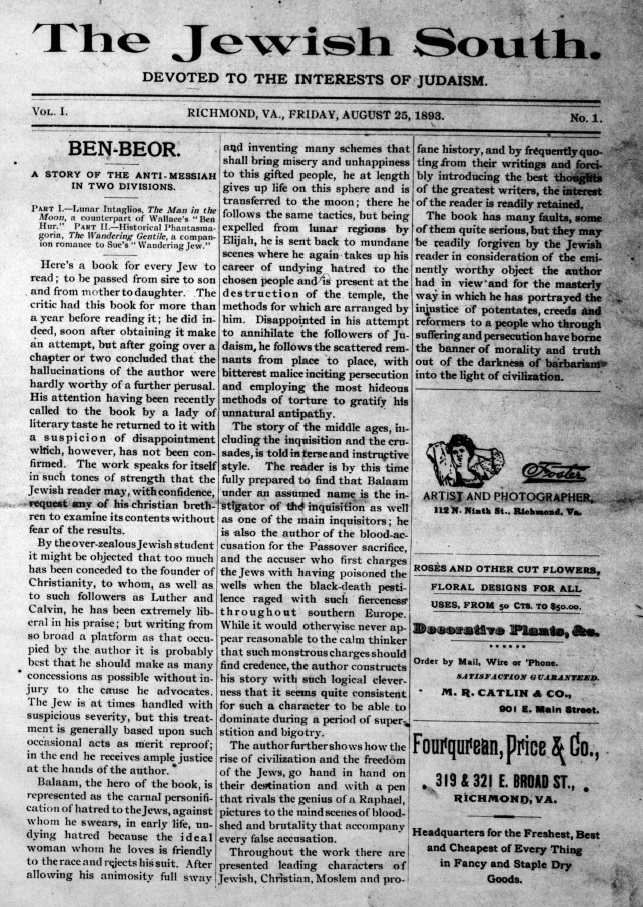 Ezekiel began his newspaper career in 1886, writing for the Richmond Dispatch and the Richmond State. He reported on trials, witnessed hangings, and was sent to write articles about the old cemeteries in the city. Ezekiel also authored several books on local Jewish history including, The Recollections of a Virginia Newspaper Man, World War One Section of the History of the Jews, The History of the Jews of Richmond from 1769 to 1917, and The Jews of Richmond During the Civil War,  all of four of which can be found in the book collection of the Library of Virginia. 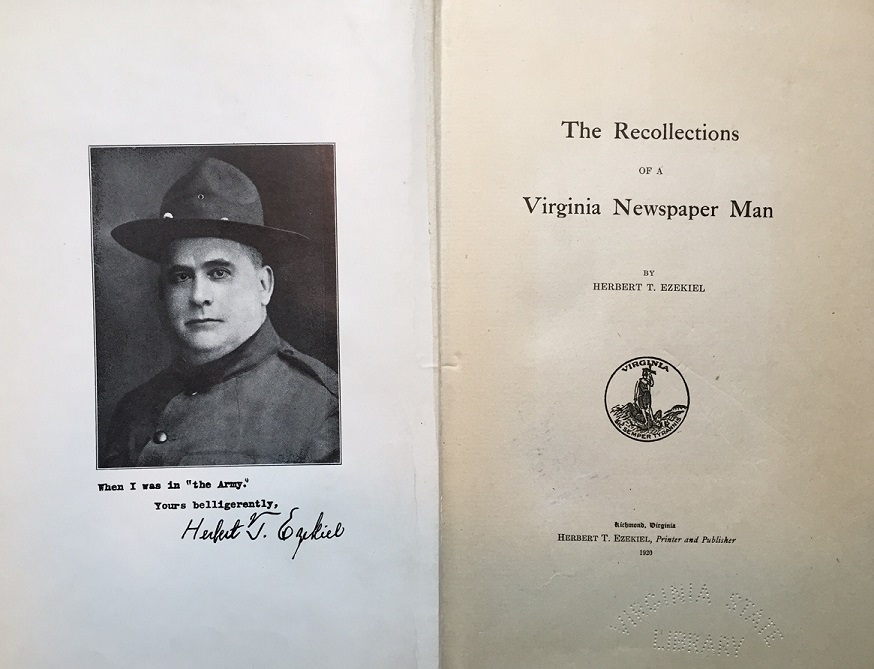 Herbert T. Ezekiel’s The Recollections of a Virginia Newspaper Man.

From the book collection of the Library of Virginia.

Ezekiel recognized Richmond as a literary and publishing center that included the talents of Edgar Allan Poe, Samuel Pleasants, Thomas Ritchie, and John M. Daniel. He requested contributions from readers so the Jewish South could be an “arena of a spirited intellectual tournament” and he wanted it to “maintain a high literary character.” Ezekiel also stressed that the paper “be a means of education and instruction, in matters pertaining to our faith.” The Jewish South published sermons, essays, and articles explaining, discussing or commenting on the lessons and doctrines of Judaism. Among these were sermons of Edward Nathan Calisch, Rabbi of Temple Beth Ahabah in Richmond. The newspaper also reported on the activities of congregations, lodges, and societies as well as the movements of businesses throughout the country.

The Jewish South is available digitally on Virginia Chronicle, the Library of Virginia’s digital newspaper repository, and on Chronicling America, a national database of digitized historic newspapers sponsored by the Library of Congress and the NEH.