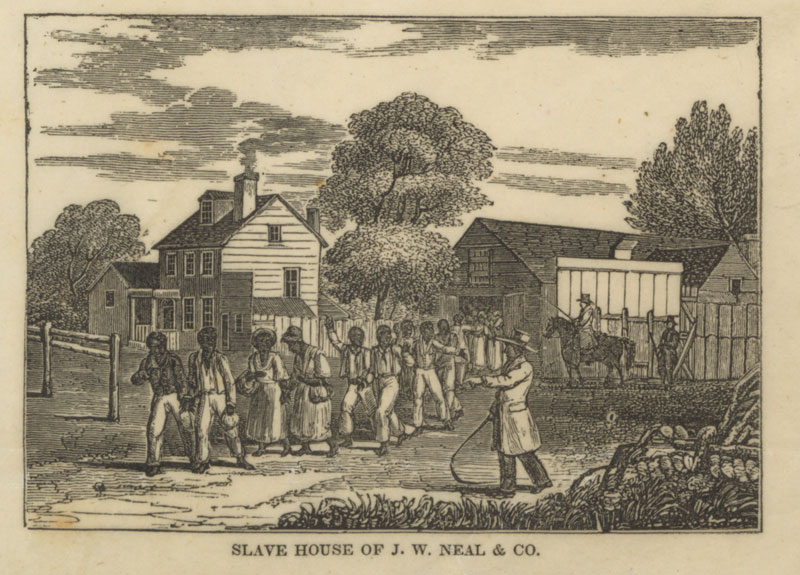 This is the second in a series of blog posts on the record types found in the forthcoming Library of Virginia research database: Virginia Untold: The African American Narrative. The initial database release will be on 1 February 2016.

Around 1811, a young girl named Ellsey was born on a plantation in Montgomery County, Tennessee. She had brothers and sisters. Her mother died sometime before Ellsey turned 11 years old. Ellsey was not a healthy child. She was “much troubled from rumitisem (sic),” a disease marked by inflammation and pain in the joints and muscles. In 1822, Ellsey made a seven hundred mile journey from Montgomery County to the Greenwood Mills plantation in Frederick County, Virginia. For a young child

suffering from rheumatism, it could not have been an easy trip. Why did she do it? Was it to seek medical attention for her illness? Did her family move to Virginia to start a new life? The answer is that Ellsey had no choice but to move to Virginia. Ellsey was a slave owned by John McAllister, a wealthy landowner and businessman. He brought young Ellsey from his Tennessee plantation to his Virginia plantation “for his own use.”

Soon after bringing Ellsey to Frederick County, McAllister was required by Virginia law to sign an oath in the local court stating that he did not bring Ellsey into the commonwealth illegally or for illegal purposes. The oath was filed in the Frederick County courthouse as a certificate of importation (or nonimportation.) It is from this kind of document that we learn more of the forced migration from other states to Virginia of Ellsey and hundreds of slaves like her.

Certificates of importation originated during the American Revolution. Virginia, first of among the newly formed states to do so, outlawed the importation of slaves for sale, which was carried out largely on British ships. In 1778, the General Assembly enacted the law, stating that “no slave or slaves shall here-after be imported into this commonwealth by sea or by land, nor shall any slave or slaves so imported be sold or bought be any person whatever.” However, the 1778 law made an exception for citizens from other states who wanted to become citizens of Virginia, permitting them to bring their slaves with them. Within ten days of their arrival in Virginia, a slave owner like John McAllister had to take the following oath before a local magistrate:

“I, (name), do swear, that my removal to the state of Virginia was with no intention to evade the act for preventing the further importation of slaves within the commonwealth, nor have I brought with me, or will cause to be brought, any slaves, with an intent of selling them, nor have any of the slaves now in my possession been imported from Africa, or any of the West India islands, since the 1st day of November 1778, so help me God.”

This oath was incorporated into a legal document called a certificate of importation (or nonimportation) and filed in the local courthouse.  In addition to the oath, the following information was typically recorded in the certificates: name of state the slaves were removed from, names and ages of slaves, names of slave owners, and how the slave owner acquired the slaves. Some certificates provide a physical description of the slaves and identify family relationships among the slaves. In the example of McAllister’s certificate of importation of Ellsey, he provides her age, skin color, place of birth, and physical health, but not the names of Ellsey’s father and siblings. They did not journey to Virginia with Ellsey, so either they remained on McAllister’s plantation in Tennessee or they had already made the trip to Virginia. If the former, one can only imagine the emotional state of an eleven year old girl leaving her family without knowing if she would see them again and moving to a place foreign to her. 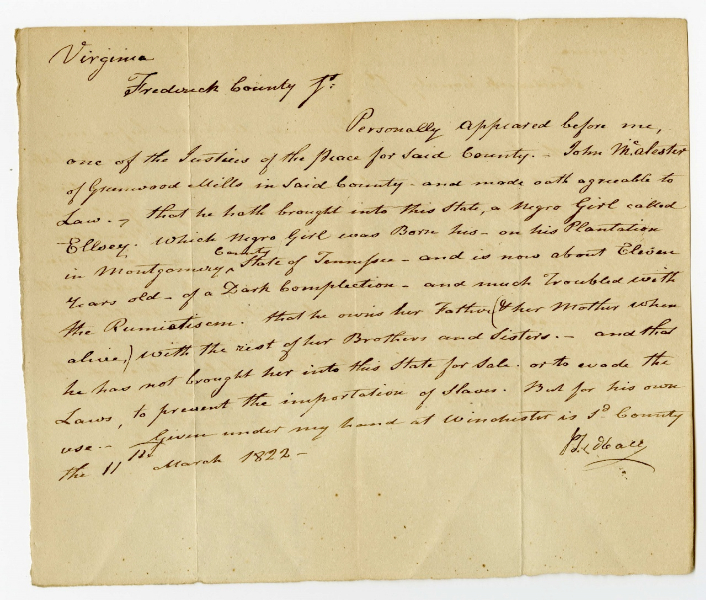 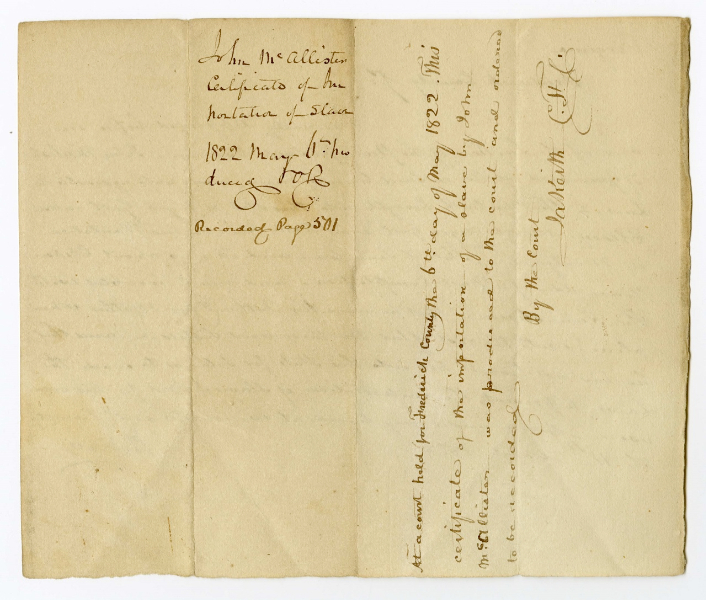 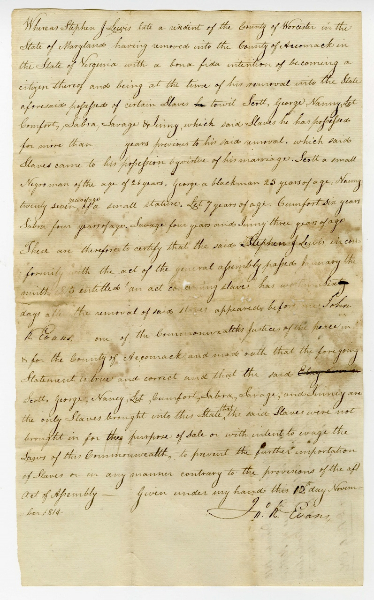 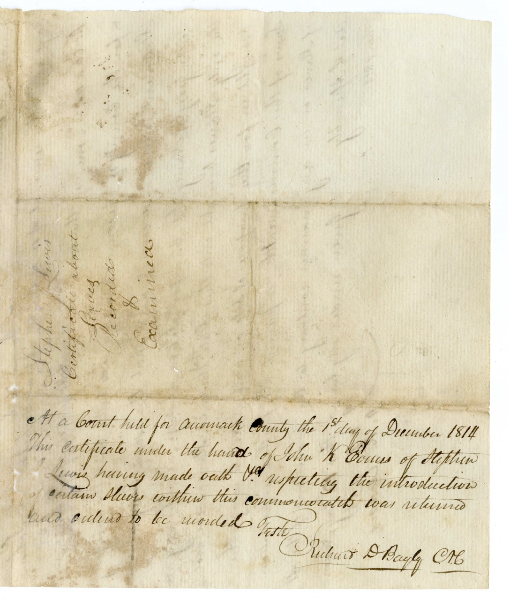 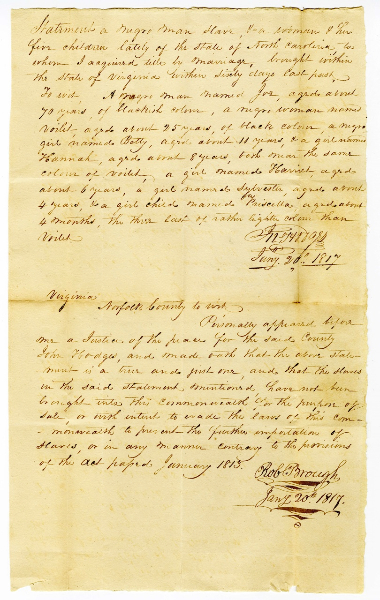 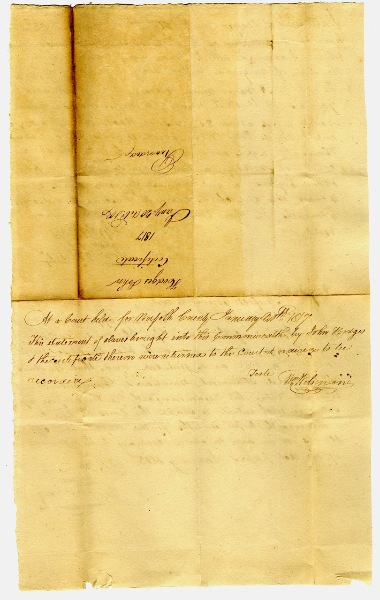 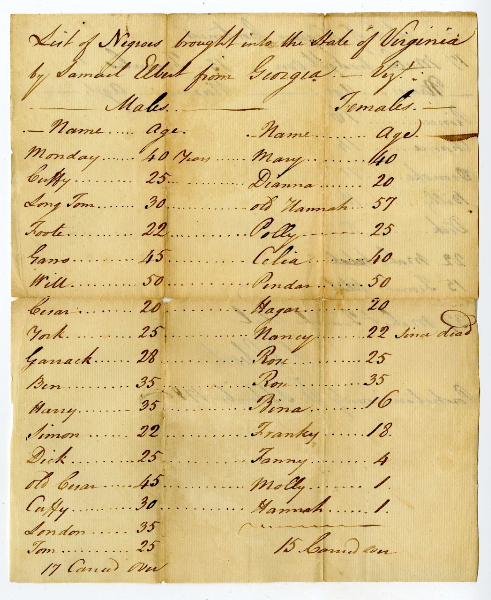 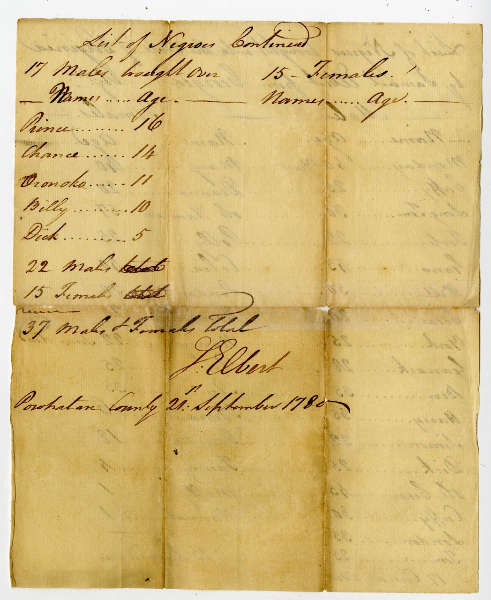 There was a clause in the 1778 act that enabled slaves brought into Virginia illegally to pursue their freedom in the local courts. According to Section 3 of the act “every slave imported into this commonwealth contrary to the true intent and meaning of this act, shall upon such importation become free.” A review of the freedom suits in Virginia Untold reveals that many slaves sued for their freedom on the basis of this clause. The vast majority of these freedom suits are found in Arlington County, which was called Alexandria County until 1920.  Given that nearby city of Alexandria was a leading center for the domestic slave trade, many slaves who moved to Arlington County with their slave owners were probably fearful of being sold. They filed suit for their freedom in the local court. For more on freedom suits found in Virginia Untold, read our recently published blog on freedom suits.

Over 100 certificates of importation from seventeen localities containing the names of more than 560 enslaved men and women are currently available in Virginia Untold.  The ages of the slaves found in the certificates range from nine months to 70 years old.  More detailed information identified in the certificates is available in a spreadsheet found here.  These certificates tell us more than just the names and ages of slaves, names of slave owners, etc. They reveal a forced migration of a group of people from other states to Virginia, a piece of Virginia history that has not been fully told.