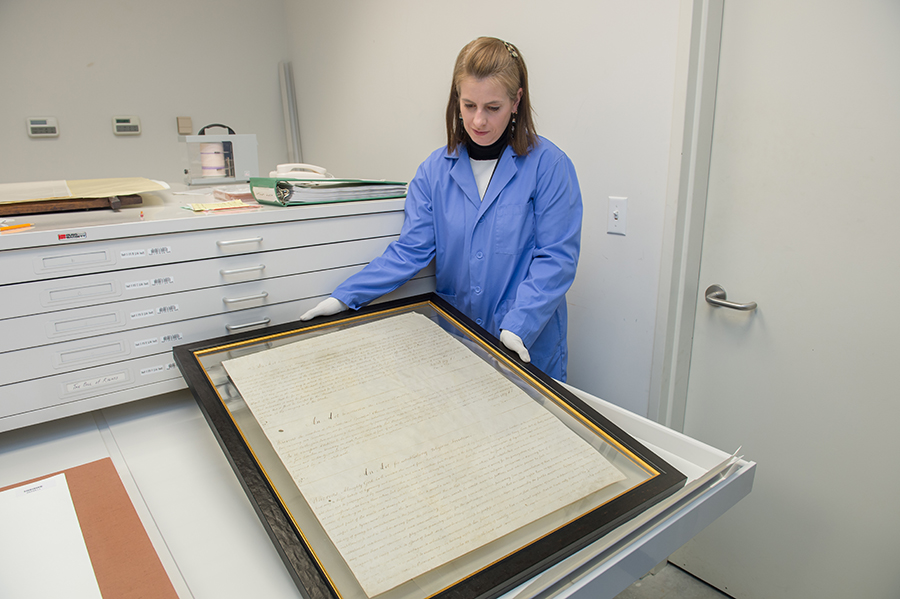 The official enrolled parchment of 16 January 1786, An Act for Establishing Religious Freedom, is one of the most important archival records preserved in the Library of Virginia. The text begins partway down one side of the parchment (a specially prepared animal skin) and concludes partway down the other side. The use of parchment developed in England hundreds of years ago for preserving official texts of laws. 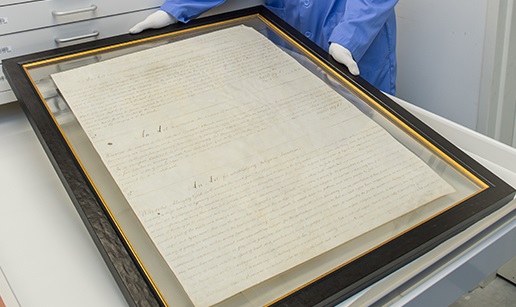 All the laws of a session of Parliament or a session of the General Assembly were copied onto parchments, signed, and then rolled up like a large scroll; hence, the title ‘Enrolled Bills’ for the official signed texts of these laws. No other version of the text, not even the text of the laws printed by order of the assembly after it adjourned, was considered as authoritative as the enrolled copy. To authenticate the text, the clerks and Speakers of the House of Delegates and Senate of Virginia all signed the document. In 1786, governors of Virginia had no veto power, and bills passed by the assembly passed automatically became law without the governor needing to sign them.

By 2013, the Statute had suffered fading and surface abrasion because of improper storage and handling in the decades following its enactment. This led the Virginia Association of Museums to name the Statute one of the Top 10 Endangered Artifacts in Virginia. With donor support, the Statute was placed in a  conservation frame in order to protect it from further damage. The framing needed to allow for viewing from both sides, so the Library decided to mount the document between two layers of UV-filtering acrylic which was inserted into a double-sided frame. Conservator Leslie Courtois created an archival polyester transparent matting to prevent the vellum from touching the acrylic. The matting holds the document in place and avoids any use of hinges or adhesive. Because this type of mounting required that the document be extremely flat, Courtois humidified one corner of the vellum to gently relax it. She sealed the edges of the glazing package to prevent humidity fluctuations from affecting the vellum, which can distort easily in reaction to humidity changes in its environment. 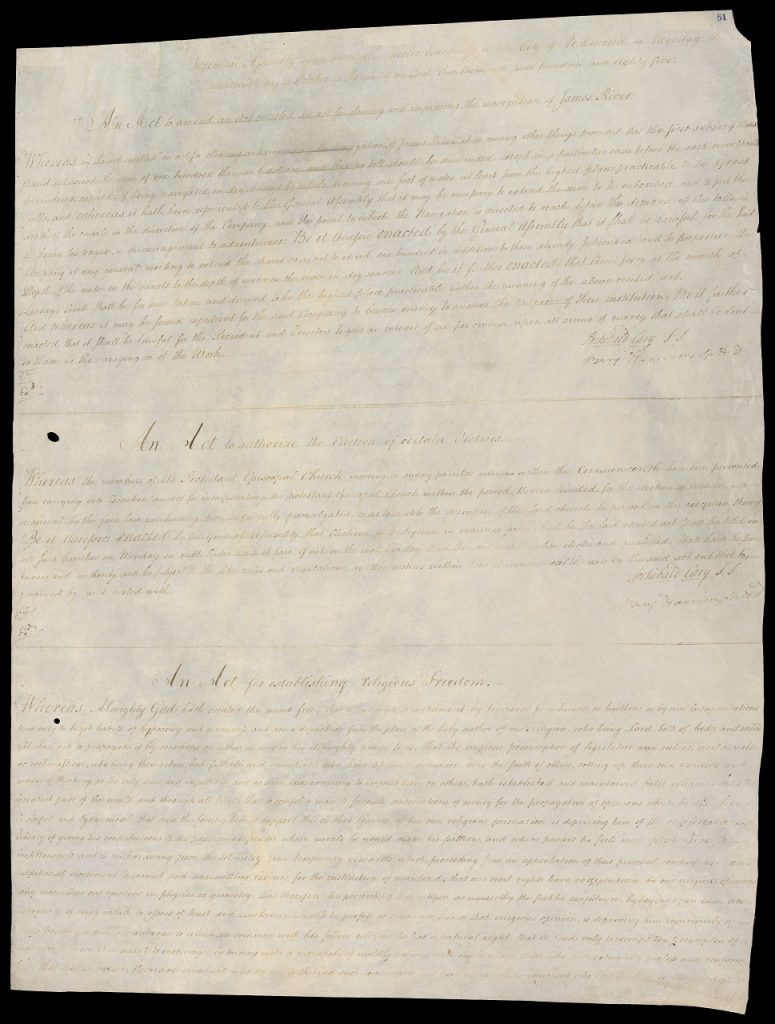 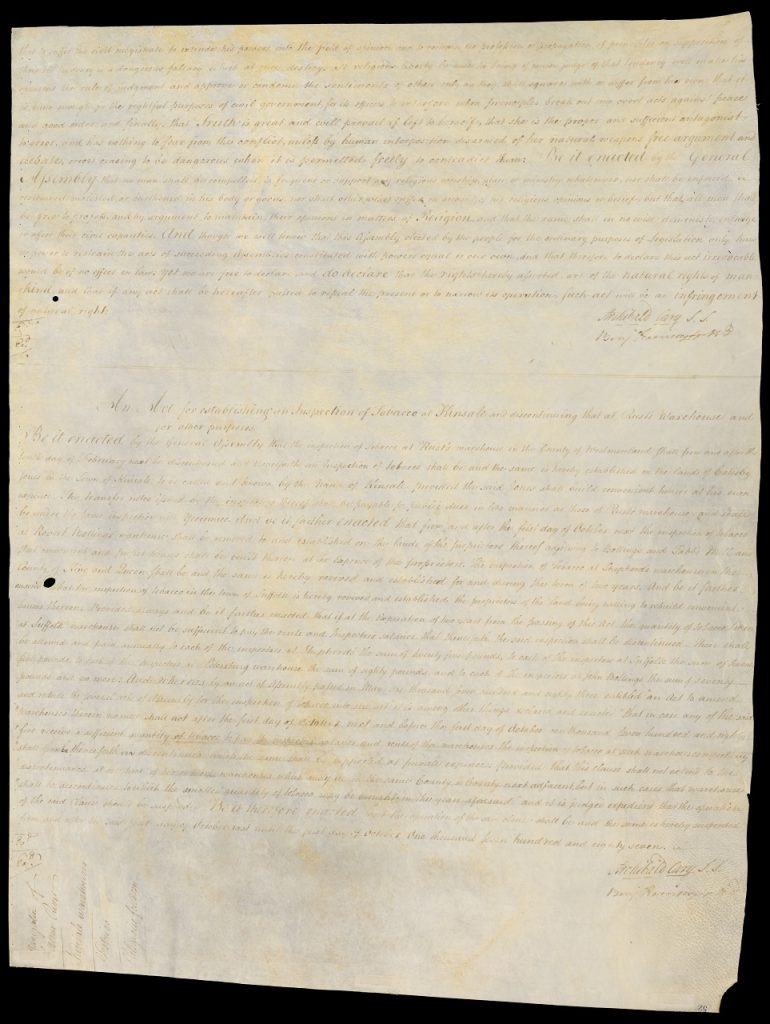 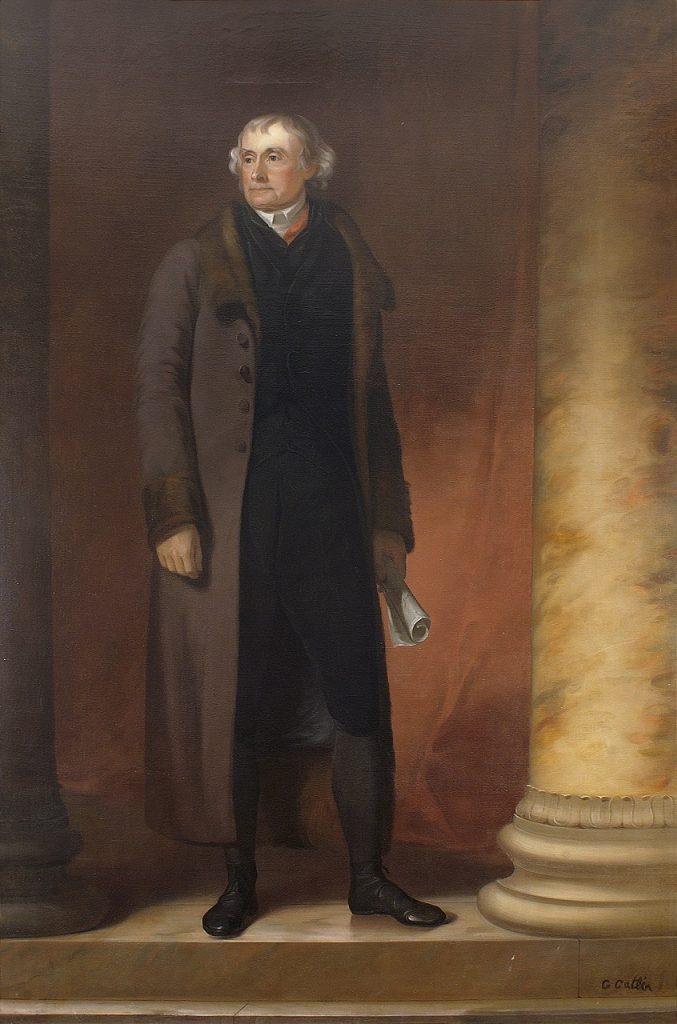 Portrait of Thomas Jefferson, copied by George Catlin from the original by Thomas Sully.

Thomas Jefferson prepared the first draft of the bill early in the American Revolution when he served as a member of a special committee to revise the laws of Virginia following the Declaration of Independence. The preamble to the act is an eloquent assertion of the freedom of the human mind and of the principle of freedom of religion. The body of the law declared that in Virginia “no man shall be compelled to frequent or support any religious worship, place, or ministry whatsoever, nor shall be enforced, restrained, molested, or burthened in his body or goods, nor shall otherwise suffer on account of his religious opinions or belief, but that all men shall be free to profess, and by argument to maintain, their opinions in matters of Religion, and that the same shall in no wise diminish, enlarge or affect their civil capacities.”

The effect of the law was to disestablish the Church of England as the official state church in Virginia and thereafter prohibit the state government from promoting, supporting, or restricting religious beliefs and practices. The language of the act continues to serve as the starting place for understanding the relationship of church and state in Virginia. And since the middle decades of the twentieth century, the language of the act has served the same purpose for understanding how the First Amendment of the Constitution is to be understood and applied.

The General Assembly adopted the law in part to protect the rights of Virginia’s religiously diverse population. The Virginia statute and the First Amendment do not specify what the role of religious beliefs shall be in American public life, and it is often extremely difficult for people to agree about the application of religious and moral beliefs to issues of public policy. From the very beginning, the language and meaning of the two fundamental texts of religious freedom in the United States have been contested. What does the phrase “establishment of religion” in the First Amendment mean? What kinds of government actions might be regarded as establishing religion? What kinds of government actions might restrict the free exercise of religion? Did the founding generation intend for the First Amendment to serve as a wall of separation between church and state, as Thomas Jefferson later wrote? What is the proper role of religion in a country with multiple, differing religious traditions? The Library of Virginia’s exhibition, First Freedom: Virginia’s Statute for Religious Freedom, opening Monday, April 18, 2016, and running through Saturday, March 4, 2017, will explore how Americans in the first decades of the twenty-first century debate issues similar to the ones that brought the act into being back in 1786.

co-author of The Campaign for Woman Suffrage in Virginia, and founding co-editor of The Dictionary of Virginia Biography