His pistols within his reach: the volatile history of the Examiner

The Examiner, published semi-weekly in Richmond, Virginia from 1798 to 1804, held a prominent place in the incendiary world of early American politics. An organ for Thomas Jefferson’s administration and edited by Meriwether Jones and his brother, Skelton Jones, the Examiner committed itself to the Republican cause, boasting in its masthead, “truth, its guide, and liberty, its object.”

Passionately dedicated to their cause, the Jones brothers constantly found themselves in hostile conflict with Jefferson’s critics, filling the Examiner’s pages with vehement editorials.

These enmities were especially fiery, as Meriwether and Skelton Jones were quick to employ vitriolic personal attacks, in contrast to editors like Thomas Ritchie, their successor, who, after purchasing the Examiner in 1804 and changing its name to the Enquirer, asserted, “this paper will not condescend to become the vehicle of personal abuse; much less of dishonorable slander. Private character is too delicate a subject for any public print.”

The most infamously volatile of these conflicts occurred between the Jones brothers and James T. Callender, editor of the Recorder (Richmond) and their former friend and employee. The feud began when Callender revealed that Thomas Jefferson had fathered children by his slave, Sally Hemmings, launching a scandal that remains contentious even today. Calling Callender’s paper “the Recorder of Lies,” the Examiner frequently published attacks on Callender’s character, calling him a liar, a drunk, and an adulterer, and accusing him of causing his wife’s death by giving her a venereal disease:

In an article addressed “To JAMES T. CALLENDER” in the Examiner, Meriwether Jones states, “The world hates you. Wherever your name travels, it carries with it that repulsive chill, which hurries our retreat from a vault of putrid human mortality!” Jones continues to lambast Callender’s character even after his death on July 17, 1803, saying, “The life and death of this man furnish any instructive lesson to the reflecting mind. It is not our purpose to write the history of this truly unfortunate human being. Let his vices repose with him in the silence and solitude of his lonely cell.”

The circumstances of Callender’s death were suspicious–he was found dead in the James River, having drowned in only a few feet of water. His death was ruled an accident, as he was intoxicated at the time. Meriwether Jones, however, contested this verdict, arguing that Callender’s death was a suicide: 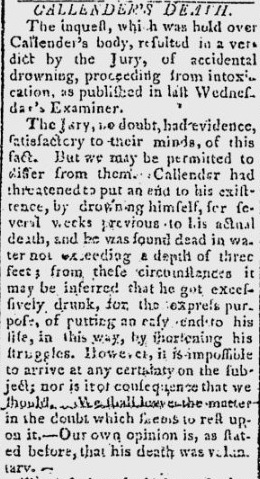 Additionally, the Examiner had published an open letter to Callender a few months prior which seems to eerily foretell of his death, saying, “James river you tell us, has sufficed to cleanse your body; is there any menstruum capable of cleansing your mind, or would it, like glittering but false ore, intirely [sic] sink in dregs?…Oh! could a dose of James river, like Lethe, have blessed you with forgetfulness, for once you would have neglected your whiskey.”

Considering Callender’s numerous enemies and the malice he inspired in them, it is not difficult to imagine that Callender may have been murdered, perhaps even by Meriwether or Skelton Jones. Nevertheless, hostile as their verbal exchanges were, there is no historical evidence that the feud between Callender and the Jones brothers ever turned violent.

There is evidence, however, that the Jones brothers may have engaged in violent duels with other people. In his biographical sketches written in the 1890s, Samuel Bassett French reports that Meriwether Jones “is said to have been engaged in several duels,” and Skelton Jones “killed several men in duels.” The best recorded of these incidents occurred in 1801 between Skelton Jones and 21-year-old Gill Armistead Selden, whom Jones shot and killed.

According to a number of secondary sources, both Meriwether and Skelton Jones were killed in duels; however, curiously neither of their obituaries in the Enquirer mentions the cause of death. 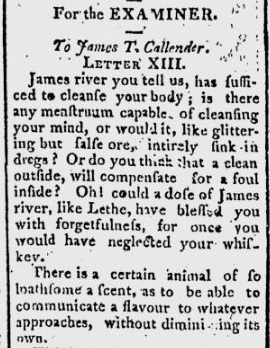 Nonetheless, Meriwether Jones’s obituary, in a testament to his fiery determination as editor of the Examiner, states “Mr. Jones frequently superintended his press with his pistols within his reach.”