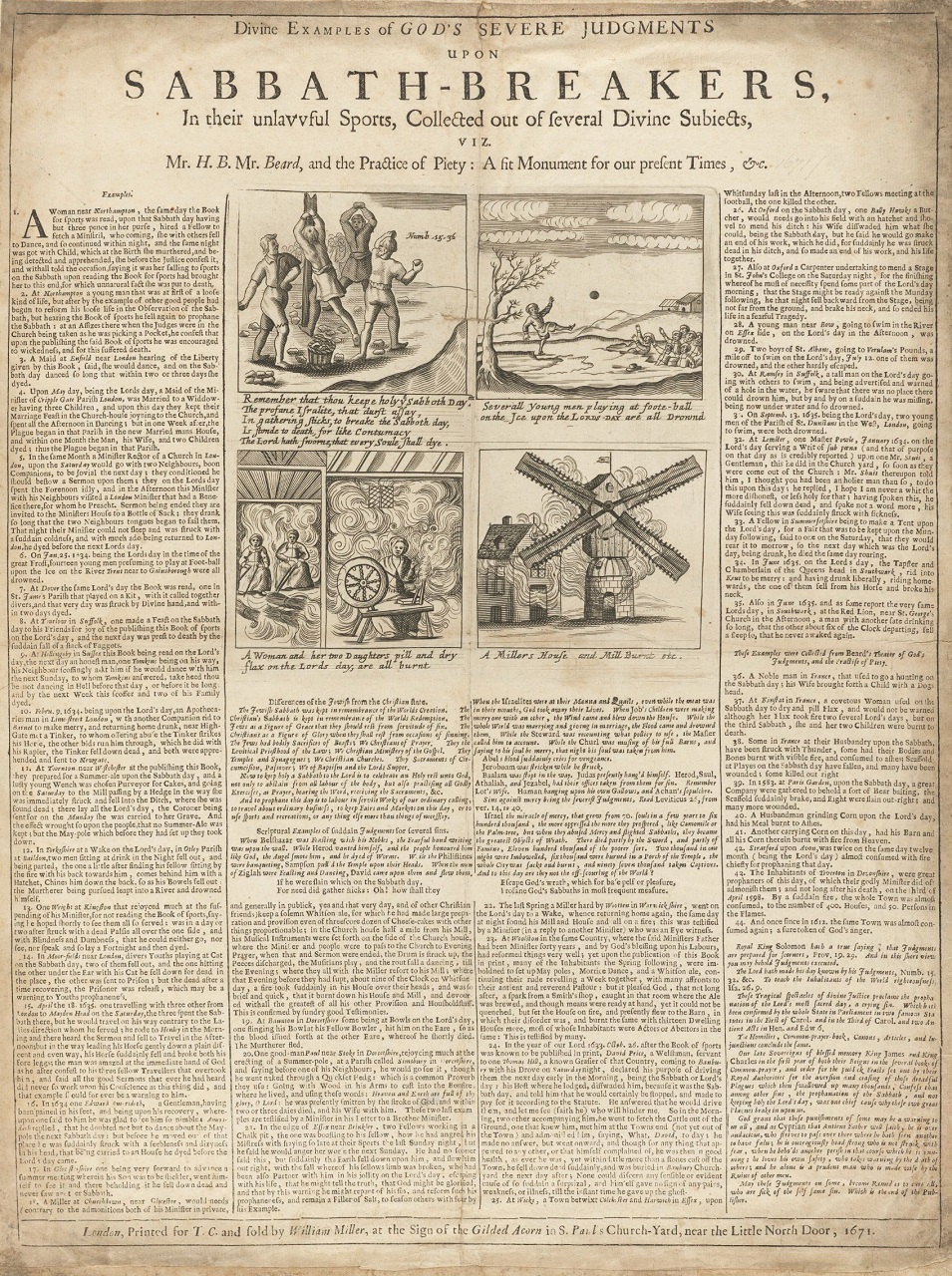 The passage of the Statute for Religious Freedom by the General Assembly in 1786 guaranteed religious freedom to people of all faiths. However, Quakers, Mennonites, Jews, and other religious minorities continued to have concerns about worshiping freely. Their religious beliefs and practices did not conform to the mainstream Protestant beliefs and cultural customs of the day. They felt it necessary to file petitions with the General Assembly in an attempt to safeguard their religious practices.

The topic of the petitions could be something seemingly mundane as with one filed by Quakers from Surry County seeking permission to keep their hats on when greeting another person. They believed the custom of removing one’s hat to greet someone “originated in pride and superstition and that it [hat removal] is a mark of honor due only to the Supreme Being.” Other petitions were more controversial such as ones filed by a group of Quakers,

Mennonites, Dunkards, and Tunkers asking to be exempted from military duty on religious grounds.

Some petitions filed by religious minorities were more easily accommodated than others. One religious tenet that proved difficult to accommodate was observance of the Sabbath. On 26 December 1792, the General Assembly passed a law entitled “An act for the effectual suppression of vice, and punishing the disturbers of religious worship, and Sabbath Breakers.” The portion of the act related to Sabbath Breakers reads:

“If any person on a sabbath day shall himself be found laboring at his own, or any other trade, or calling, or shall employ his apprentices, servants, or slaves in labor, or other business, except in be in the ordinary household offices of daily necessity, or other work of necessity or charity, he shall forfeit the sum of one dollar and sixty-seven cents for every offence.”

For the legislators who wrote and passed the law, the Sabbath was observed on Sunday. The vast majority of religious faiths in the Commonwealth regarded Sunday to be the official Sabbath day. However, the followers of Judaism did not. Jews in Virginia observed Saturday as the sacred day of rest and conducted their business and trades on Sunday. Following passage of the 1792 Sabbath law, Jewish bakers, grocers, etc., were cited for being “Sabbath breakers” by local law officials and had to pay the fine.

In 1846, a petition was filed with the General Assembly by two gentlemen from Richmond who referred to themselves as “belonging to the Jewish persuasion.” Their names were Jacob A. Levy and Jacob Ezekiel. They recounted how in 1837 both quietly conducted their business on the first day of the week. An officer of the law charged them with violating the 1792 Sabbath law and they were soon afterward fined 10 shillings by the mayor of Richmond. The petitioners acknowledged that when they paid the fine they did not pay “strict attention to the nature of the law which they had infringed, but recent circumstances have forcibly led them to consider it utterly objectionable and in direct opposition to the spirit, if not to the letter, of the Bill of Rights and the Constitution of the State of Virginia.” 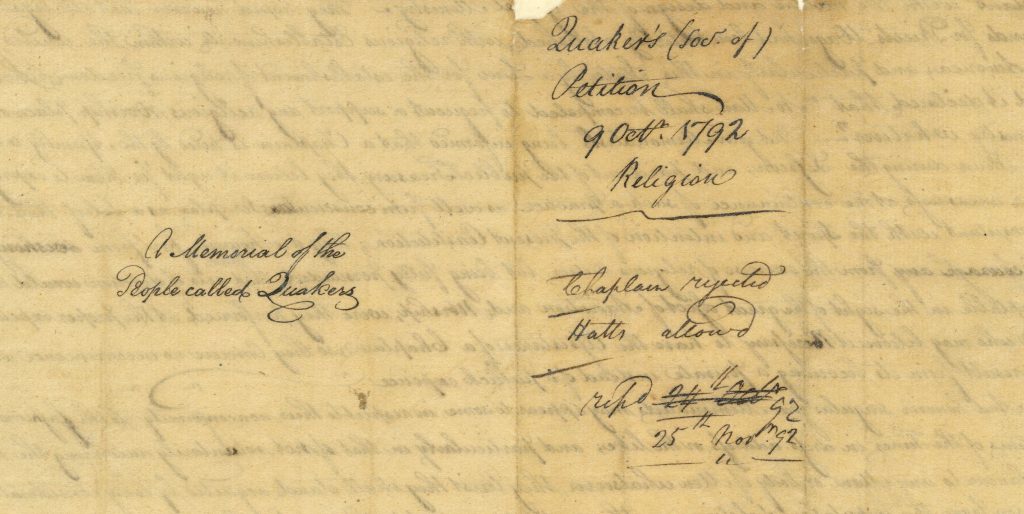 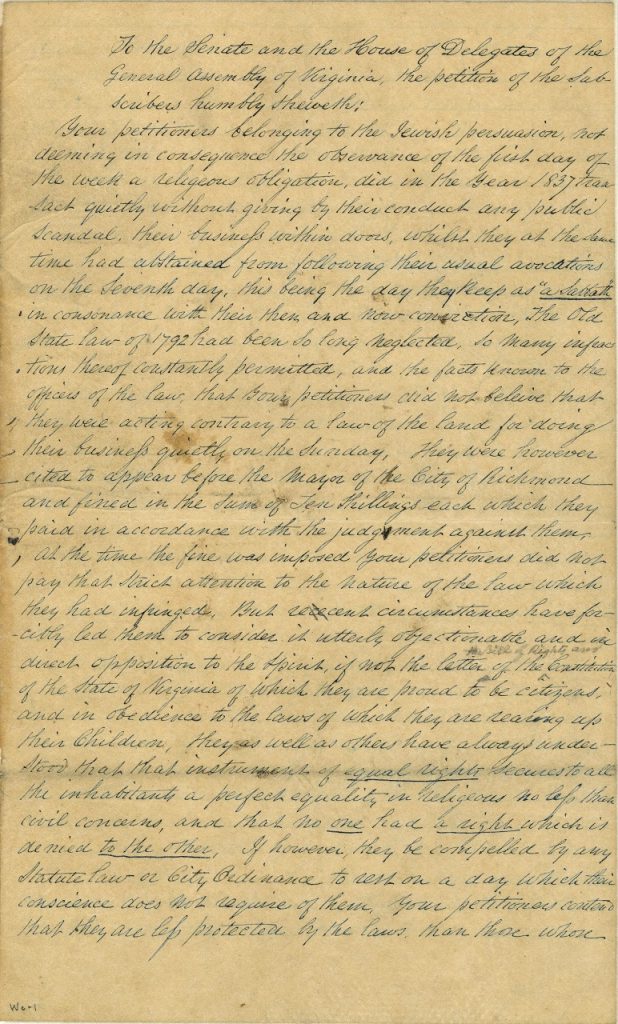 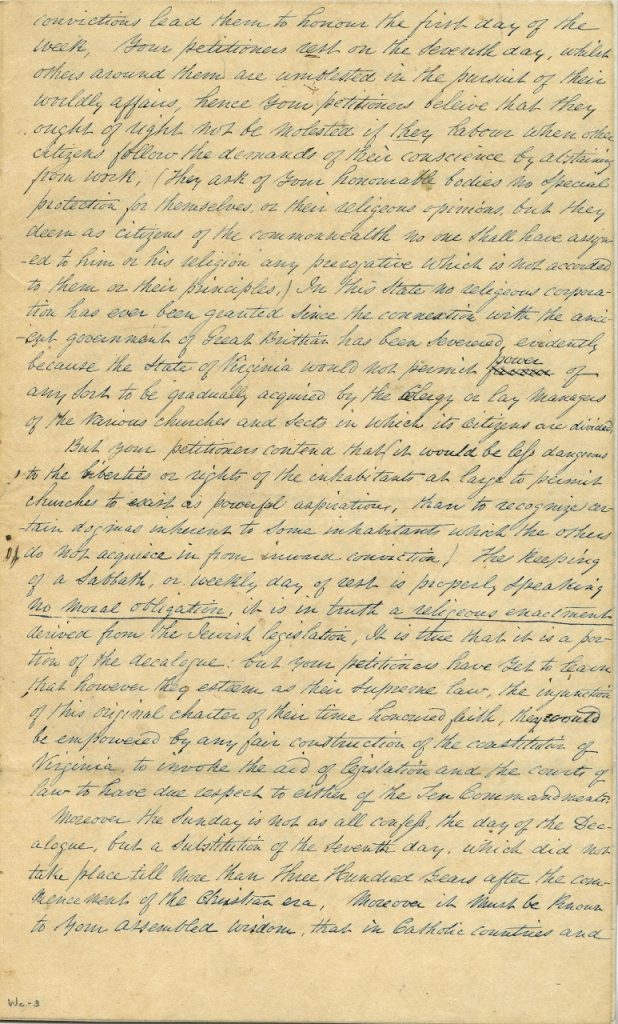 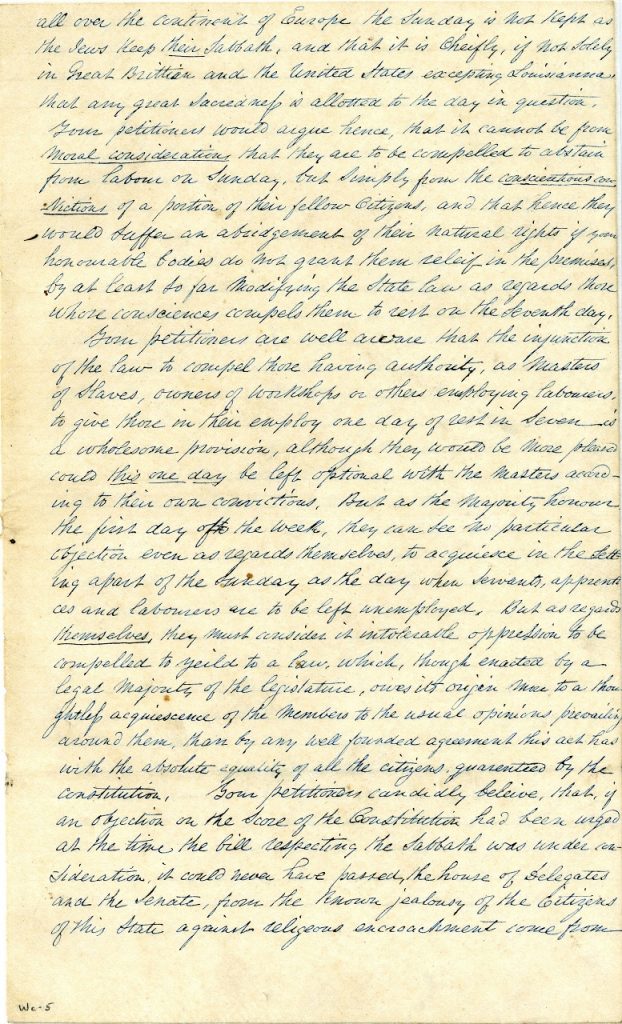 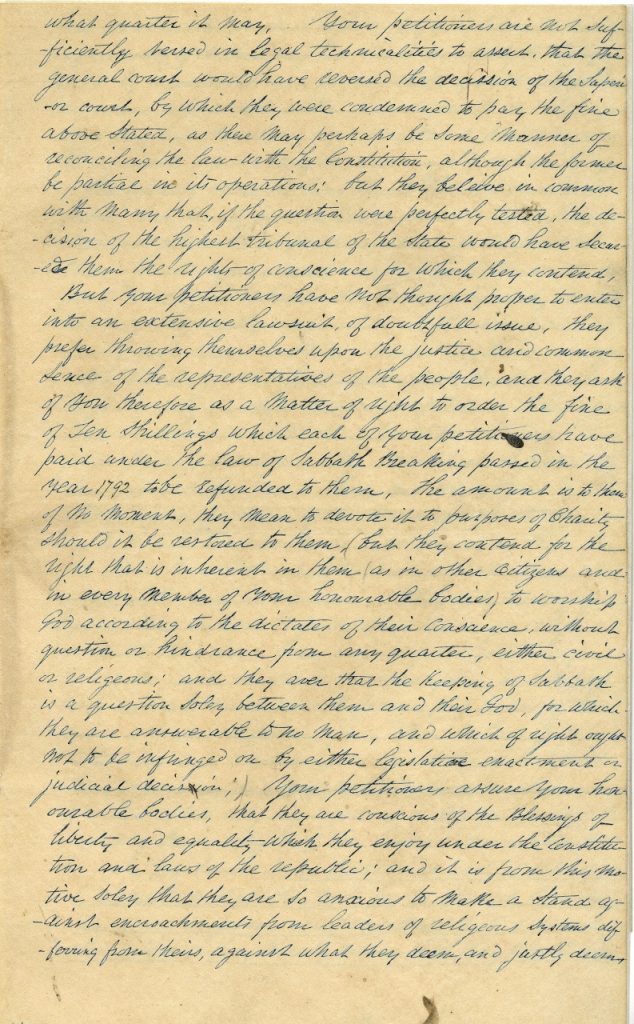 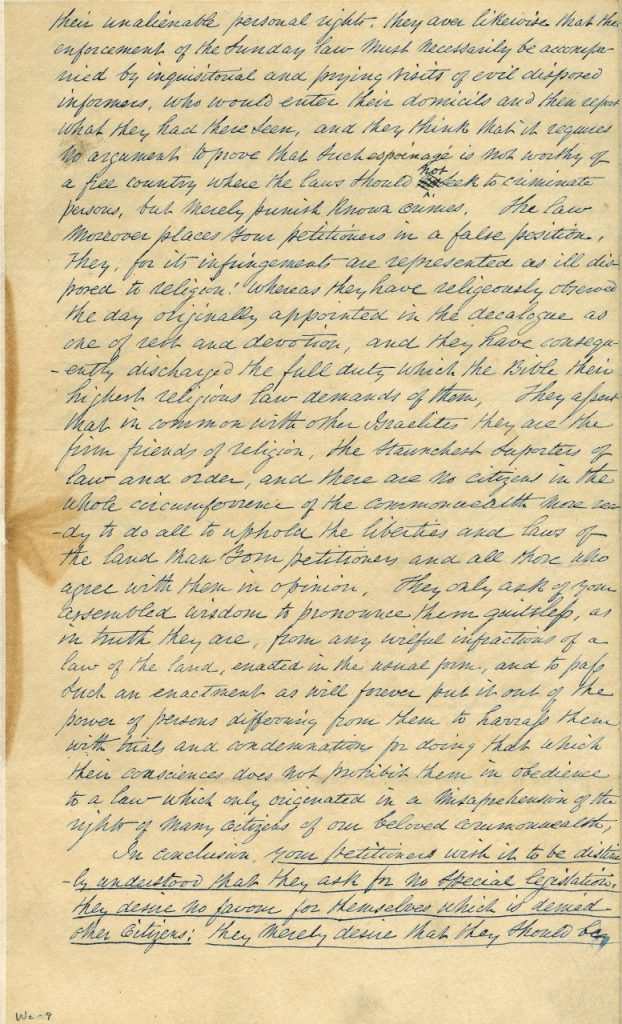 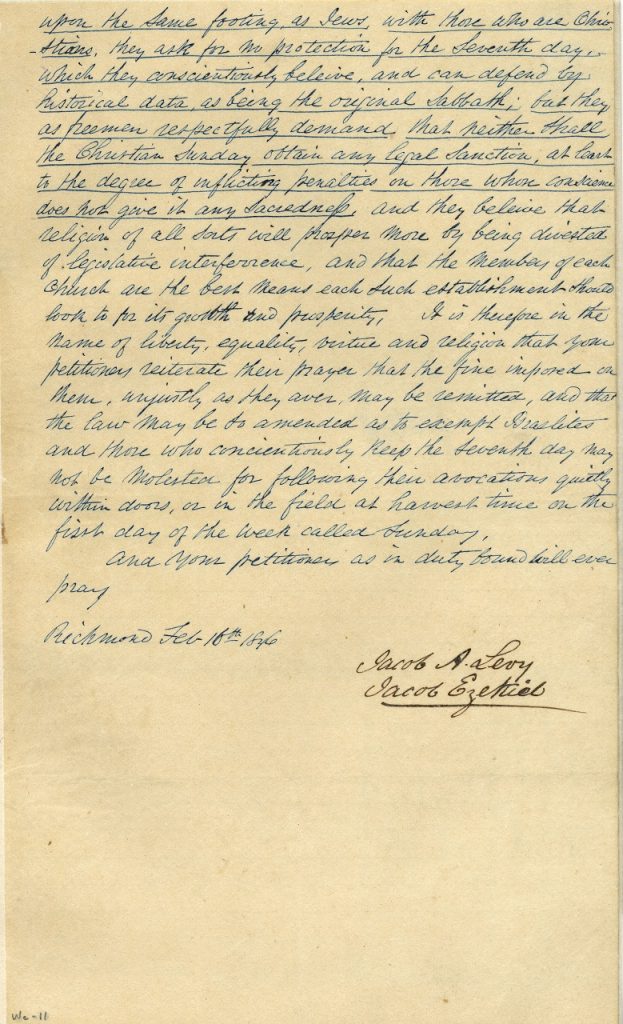 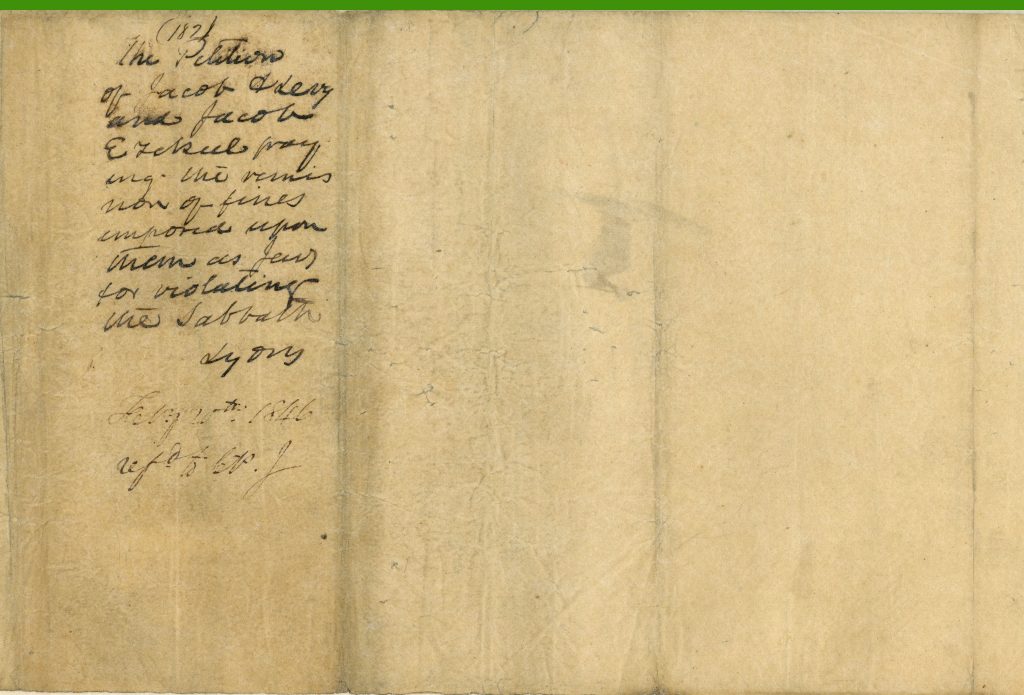 Levy and Ezekiel made several arguments against the 1792 Sabbath. First, it was discriminatory against Jews. Citizens who did not observe Saturday as the Sabbath as Jews did were free to pursue their “worldly affairs” with no fear of being fined. The same should be true for Jews “if they labour when other citizens follow the demands of their conscience by abstaining from work” on Sunday. Second, the observance of the Sabbath originated with the Jews. It was one of the Ten Commandments given to the petitioners’ ancestors. Sunday as a day of rest was a “substitution of the seventh day, which did not take place till more than three hundred years after the commencement of the Christian era.” Finally, the enforcement of the Sabbath law encouraged “evil disposed informers” to enter homes of fellow citizens in order to find accusations of breaking the Sabbath. The petitioners argued “that such espionage is not worthy of a free country.”

Levy and Ezekiel requested that they be refunded the fine they paid, but that was not the main reason why they filed their petition. They considered the keeping of the Sabbath a question “solely between them and their God, for which they are answerable to no man, and which of right ought not to be infringed on by either legislative enactment or judicial decision.” They did not want the General Assembly to give special legal sanction to the Jewish Sabbath or do away with the Sabbath as a day of rest. Rather, they hoped to see an amendment to the 1792 Sabbath law to allow Jews and people of other faiths that keep the seventh day as their Sabbath and be able to pursue their business on Sunday free of prosecution. 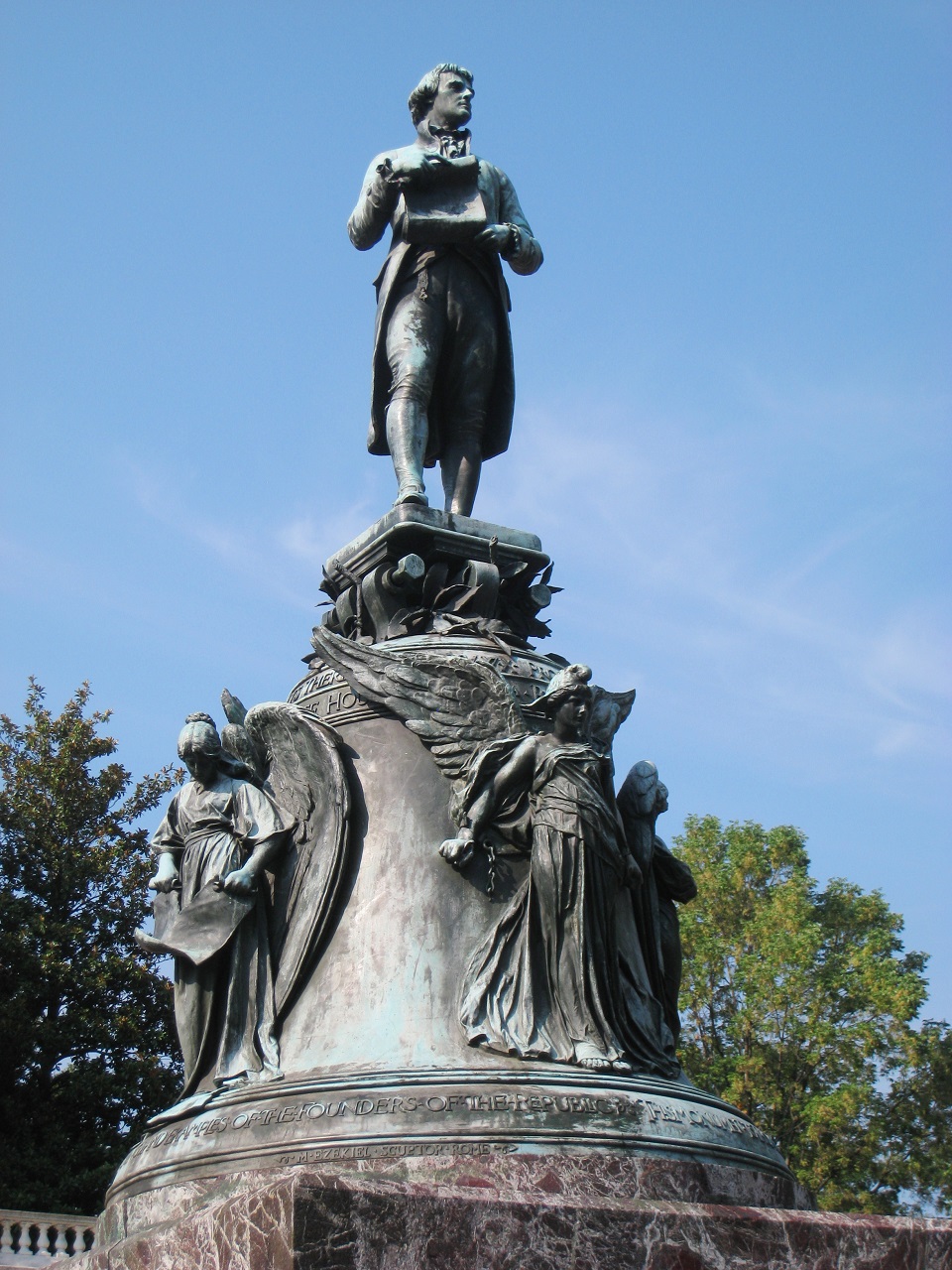 The General Assembly referred Levy and Ezekiel’s petition to the Committee on the Courts of Justice where it expired. Levy and Ezekiel resubmitted their petition in 1848 but the committee it was assigned to refused to consider it. The Sabbath law was amended in 1849 when the General Assembly revised the laws of the Commonwealth. A clause was added saying that penalty would not be imposed on “any person who conscientiously believes that the seventh day of the week out to be observed as a Sabbath, and actually refrains from all secular business and labour on that day, provided he does not compel a slave, apprentice, or servant not of his belief, to do secular work or business on Sunday, and does not on that day disturb any other person.”

However, as we’ll learn in “First Freedom: The Great Sabbath Debate, Part 2,” the 1849 amendment to the Sabbath law did not put an end to the Sabbath debate. It resurfaced after the Civil War. To learn more about the General Assembly’s efforts to accommodate the varied religious practices and beliefs of Virginians, search the Legislative Petition Digital Collection available at Virginia Memory.  To learn more about the legacy of religious liberty in Virginia, come to the Library of Virginia and visit the current exhibit “First Freedom: Virginia’s Statute for Religious Freedom,” April 18, 2016–March 2, 2017.

Read the second part of this blog post here.