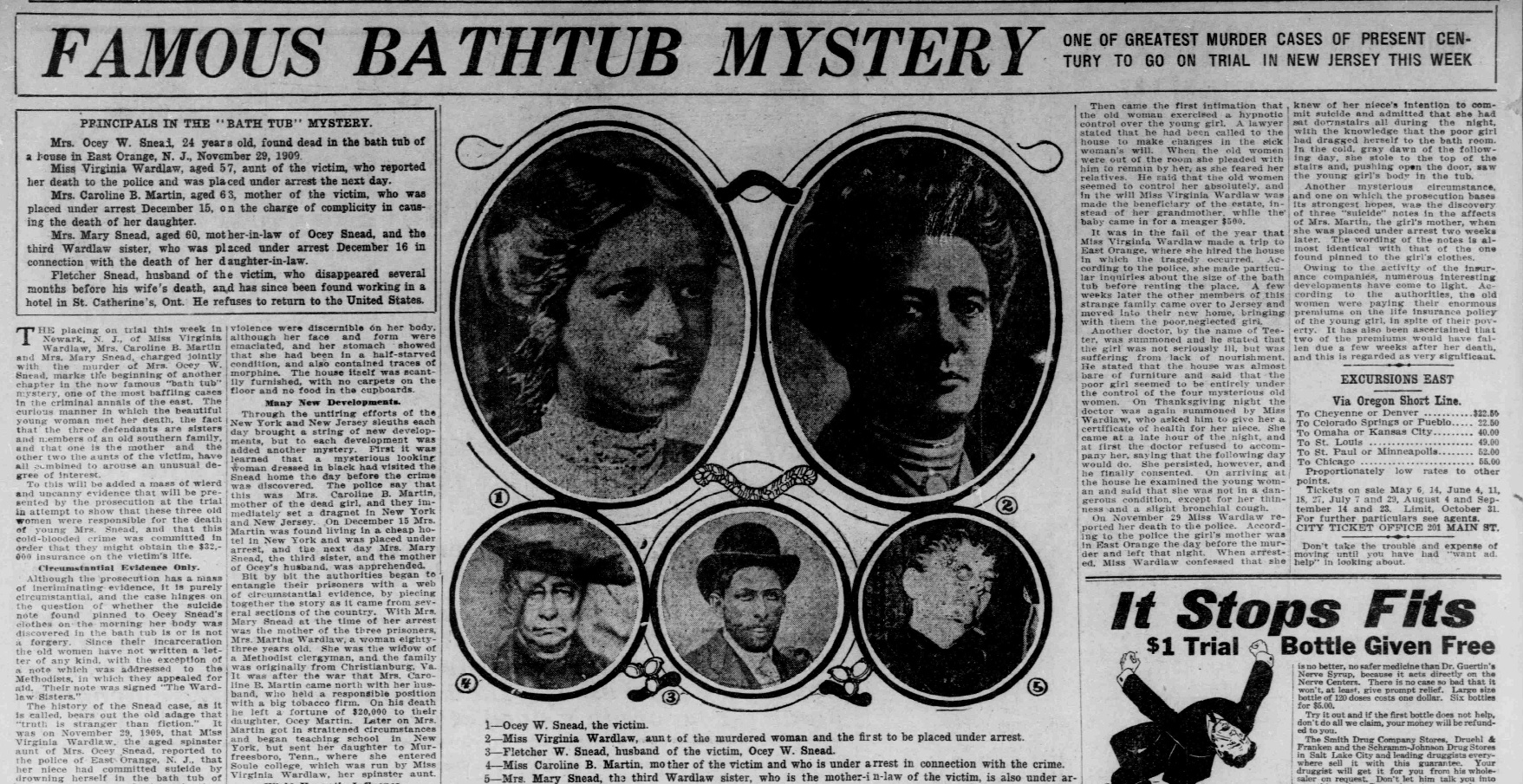 more dreadful than the most gruesome of tales: Newspaper Coverage of The East Orange Bathtub Mystery

I n 1909, a mystery unfolded that was so shocking, it’s nearly too strange to believe today. 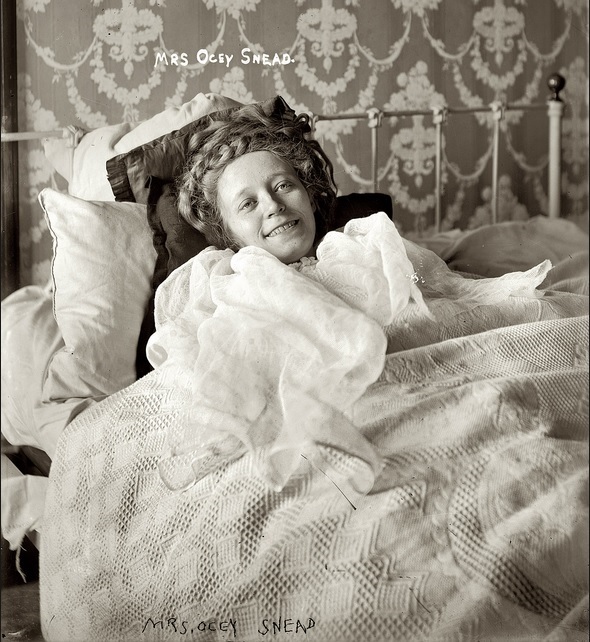 From the Grantham Bain collection of glass negatives

Shows like Dateline and Forensic Files continuously reveal the depths of human depravity and the bizarre story of Oceania (Ocey) Snead and the events leading up to her death could have easily found their way into an episode of true crime TV had the murder happened today. But Ocey Snead’s strange story happened long before television, at a time when murder mysteries were played out, in vivid detail, on the pages of newspapers.

To tell Ocey Snead’s story, we should start seven years before her death. . .

In 1902 Virginia Wardlaw arrived in Christiansburg, Virginia to run Montgomery Female College, a well-respected boarding school for young women and girls. Her aunt, Mrs. O. S. Pollock, had run the school for several years and asked Virginia, who had experience in teaching and academia, to take it over.

The college offered students room and board and course study in English language, literature, ancient and modern history, natural science, mental and moral science, math, music and ancient and modern languages. “The remarkable purity and healthfulness of the atmosphere,” explained its 1880 catalog, “render the location peculiarly eligible for a seat of learning.” 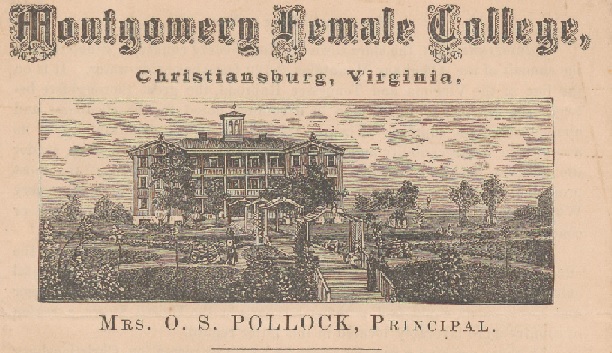 Image from the 1880 catalog for the Montgomery Female Institute

Virginia Wardlaw’s sister, Mary Snead, later joined her in Christiansburg to help run the school.  All went smoothly until a third sister, Caroline Martin, joined them, taking over the college’s administrative duties. Caroline acted erratically, suddenly changing the school’s curriculum, shifting students to different classes, padlocking doors for no reason and concocting a scheme to turn the institution into both a school and a resort. Not long after Caroline took her position, Montgomery College went into financial decline.

On top of Caroline’s strange behavior and administrative incompetence, once all three sisters were working at the college, an inordinate number of tragedies occurred—among them, an illegitimate baby born to a student mysteriously disappeared and Mary Snead’s son, Wardlaw, was found burned to death in his bed.  Coincidentally, Wardlaw died shortly after his mother and aunts had taken sizable life insurance policies out on him, but his death was ruled a suicide.

Though Wardlaw’s wife and the insurance companies suspected foul play, the sisters did not attract the attention of authorities for a number of reasons. First, they came from a well-respected and deeply rooted Virginia family–the daughters of clergyman, John Baptist Wardlaw. Secondly, before she landed at Montgomery College, Virginia had served as president of Soule College, a Methodist women’s college in Murfreesboro, Tennessee, “where pupils were supervised closely in all matters of moral and religious nature.” Mary helped Virginia run Soule College as well and the two gained reputations as “women of fine character and gentle demeanor.” Finally, Caroline Martin, though once described as “peculiar in her actions,” was the widow of Col. Robert M. Martin, an entrepreneur and renowned Confederate war hero.

In spite of the women’s reputations, the financial stress and weird happenings at Montgomery College finally led to its closing—the sisters then headed north.

On November 29, 1909, in East Orange, New Jersey, a twenty six year old woman was discovered dead in her bathtub in what initially appeared a suicide. There was a note pinned neatly to the clothing found adjacent to her body in which the last line read: “Rejoice with me that death brings me a blessed relief from pain and suffering greater than I can bear.” The note was signed “O. W. M. Snead.”

The young woman was Ocey Snead, the daughter of Caroline and Robert Martin and niece of Virginia Wardlaw and Mary Snead. She was also the daughter-in-law of Mary Snead as she had married her cousin, Mary’s son, Fletcher. The apparent reason for the suicide was the death of her daughter: “Last year my little daughter died,” read the note, “Other near and dear ones have gone before. I want to join them in heaven.”

Initial newspaper reports of the young woman’s death appeared days after her body was discovered, around December 3—by that time, foul play was suspected. Because large life insurance policies had been taken out on Ocey, an investigation was initiated by the insurance companies involved. In the weeks following her death, a strange and gripping story unfolded on the pages of weeklies and dailies across the country. 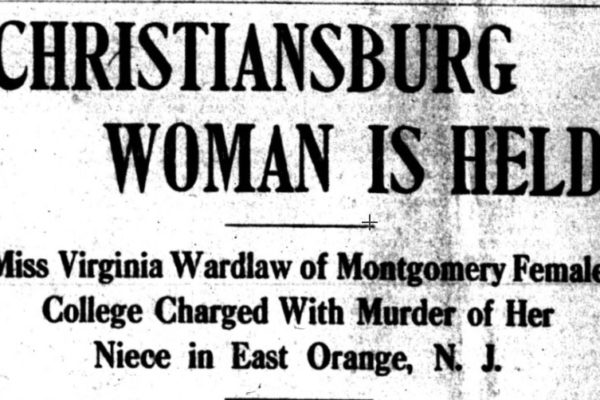 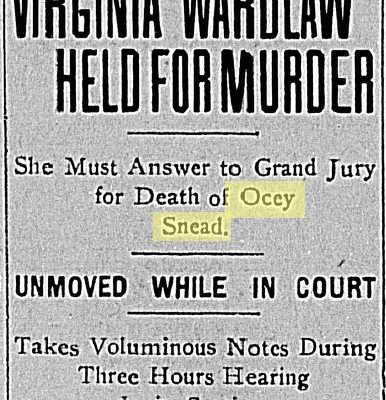 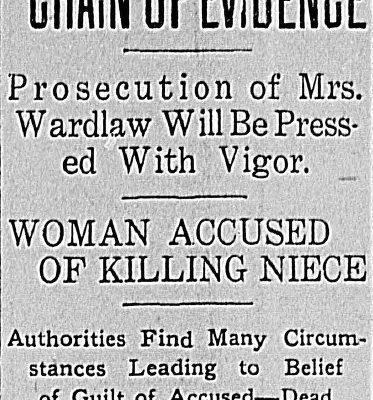 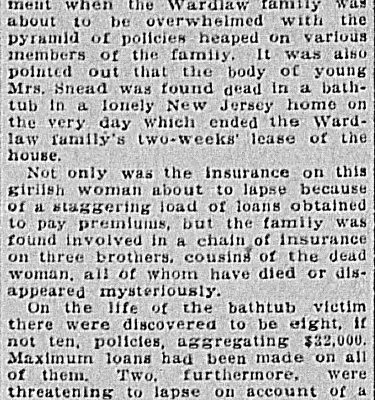 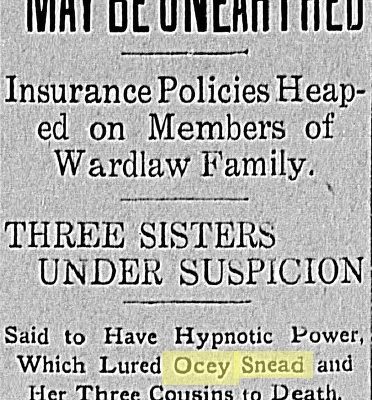 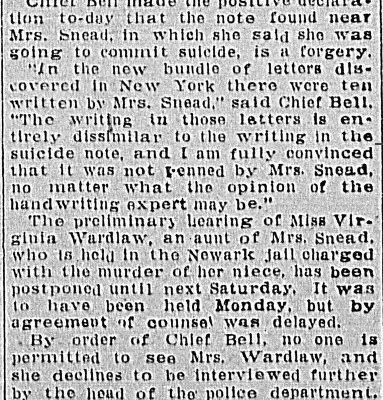 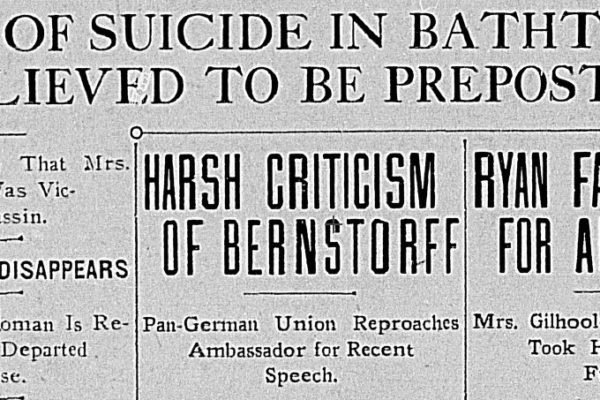 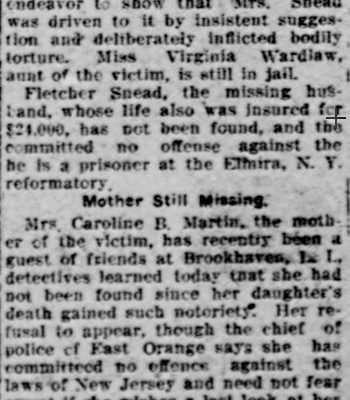 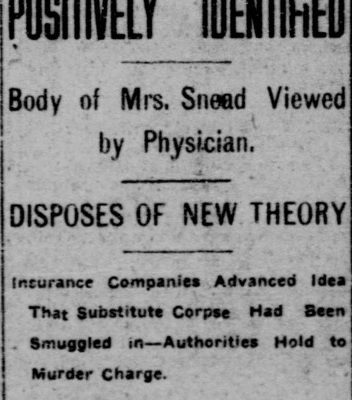 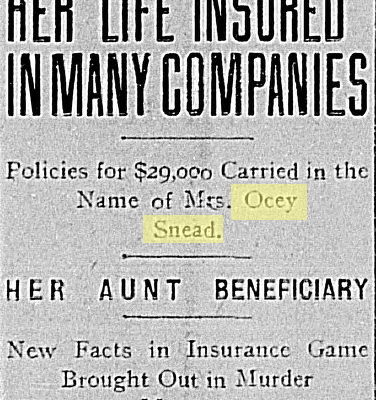 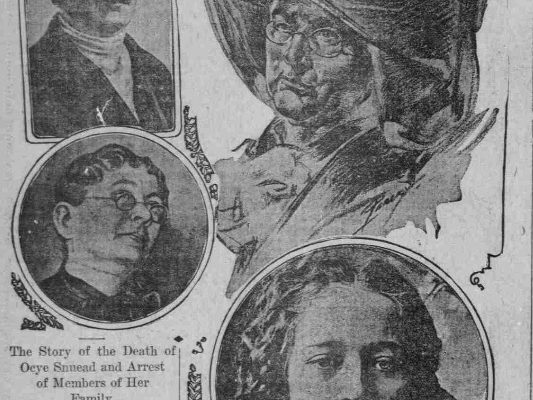 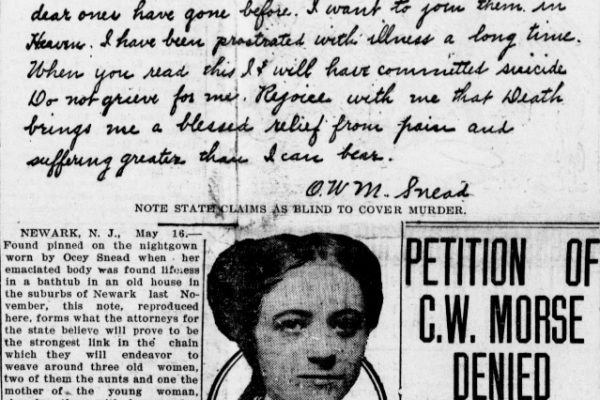 Though what became known as the “bathtub mystery” received extensive coverage in newspapers nation-wide, Virginia publications were especially interested in the story due to the family’s connection to the Old Dominion.  On December 7, 1909, A Times Dispatch headline read, “Chain of Crimes May Be Unearthed: Insurance Policies Heaped on Members of Wardlaw Family.” What followed was an article speculating on possible past crimes and a diabolical scheme of three sisters who needed a windfall:

“Insurance companies made public today a mass of evidence which showed that the death of Mrs. Ocey W. M. Snead came at the very moment when the Wardlaw family was about to be overwhelmed with the pyramid of policies heaped on various members of the family. It was also pointed out that the body of young Mrs. Snead was found dead in a bathtub in a lonely New Jersey home on the very day which ended the Wardlaw family’s two-weeks lease of the house.

Not only was the insurance on this girlish woman about to lapse because of a staggering load of loans obtained to pay premiums, but the family was found involved in a chain of insurance on three brothers, cousins of the dead woman, all of whom have died or disappeared suddenly.

On the life of the bathtub victim there were discovered to be eight, if not ten, policies aggregating $32,000. Maximum loans had been made on all of them. Two, furthermore, were threatening to lapse on account of failure of the payment on premiums. And at the very time that the insurance companies were threatening to wipe out insurance for failure of the payment on premiums the family was practically starving to death.” 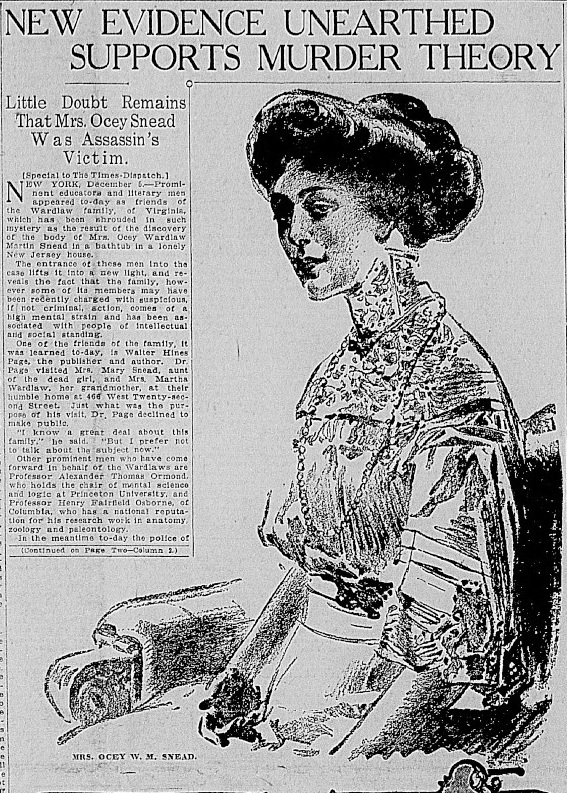 On December 8, 1909, the Times Dispatch reported that just a day before the young woman’s death, Virginia Wardlaw paid the premiums on three $5,000 life insurance policies in Ocey’s name. It also claimed that Virginia had attempted to buy chloroform from a local drug store and that an “investigation by reporters” revealed that Ocey “lived in constant fear of her mother and aunts.” 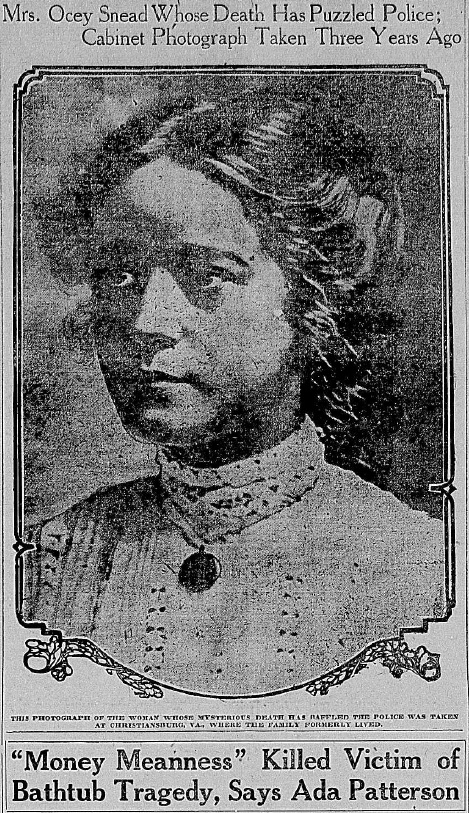 Over the next year and a half, newspapers continued with reports on young Ocey’s strange and tragic story as more details came to light. Various doctors and lawyers who had visited the home in the years subsequent to her death had tried to help her. Her aunts and mother had physicians come into the home to examine Ocey to prove how sickly she was, but the examinations revealed she was simply malnourished. One doctor attempted to smuggle food to her through a window—another of her doctors spoke to a lawyer about how he might help free her from the family but was told there were no legal grounds for the young woman’s removal from the home.

Newspaper investigations revealed that Ocey’s mother and aunts had conspired to slowly extinguish the life of their own daughter and niece. They had taken her infants away, held her captive, kept her in a morphine induced stupor, and starved her which ultimately led to her death. An apt article, written by Ada Patterson in the Dec. 7, 1909 Times Dispatch, called it “money meanness.” “It is a horrible modern ghost story,” she wrote, “more dreadful than the most gruesome of tales, ‘The Murders in the Rue Morgue.’ And the motive and the cause, whatever the immediate manner of the girl mother’s death, was money meanness.”

In the event’s aftermath, newspapers also reported on the fate of the three sisters. Virginia Wardlaw’s health gradually worsened while in custody until she finally died on August 11, 1910. After her death, it was discovered that she had been hiding food in her cell. Ironically, before she could be tried, Virginia killed herself the same way she had killed her niece, by starvation. “Death was due, in the opinion of the physician, to starvation,” the August 19, 1910 Staunton Spectator and Vindicator explained, “The fate of the aged woman in this respect paralleled that of her alleged victim.” 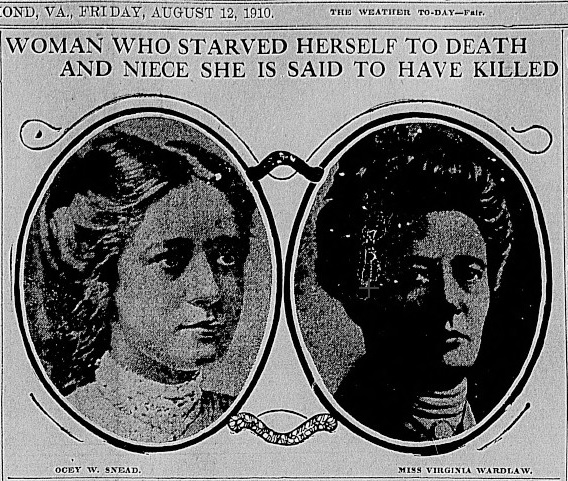 Months after Virginia Wardlaw’s death, the Times Dispatch closely followed the trial of Ocey’s mother, Caroline Martin. According to reports, she was an uncooperative defendant and repeatedly caused chaos in the courtroom. “The examination of Mrs. Martin, mother of Ocey W. M. Snead, the East Orange bathtub victim, as to her sanity,” reported the November 11, 1910 Times Dispatch, “has been replete with incident.” On January 24, 1911, the T-D reported on Martin’s verdict, “Mrs. Caroline B. Martin caused a sensation today by fighting, screaming and finally collapsing in the Court of Oyer when Judge Ten Eyck sentenced her to serve seven years in State’s prison for manslaughter.” 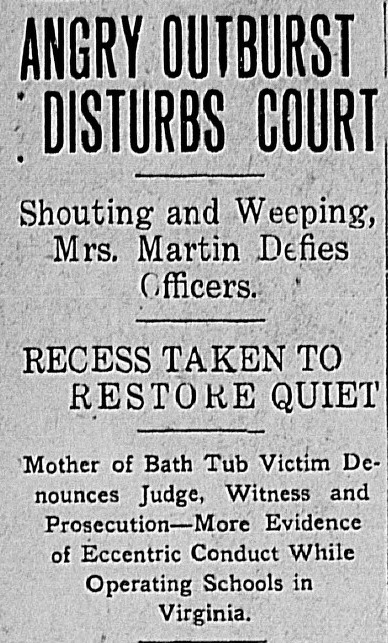 Two days later, the Free Lance and the Mathews Journal also reported on the verdict. The Mathews Journal headline read, “Oversdose of Drug Caused Death,” reporting that Caroline Martin claimed she accidentally killed her daughter with a lethal dose of morphine. In a panic, Caroline then dragged the body to the bathtub and forged a suicide note.  But based on the evidence and the suspicious deaths that seem to follow Caroline Martin (her husband and son had both died suspiciously many years earlier), it was no accident, but part of a deliberate plan to kill Ocey.

On June 13, 1913, the New York Evening World reported that after only a few months in prison Caroline Martin was moved to an asylum.  At sixty seven, she died of heart disease in New Jersey’s State Hospital for the Insane.

Mary Snead’s fate is more mysterious than that of her sisters. She was cleared on all charges due to a technicality, moved to Colorado and was never heard from again.  Fletcher Snead, Ocey’s husband, who disappeared months before her death, was later discovered working in Canada where he had fled to escape his mother and aunts.

Over a year after Ocey’s death, the El Paso Herald printed a long article on the details of the case. 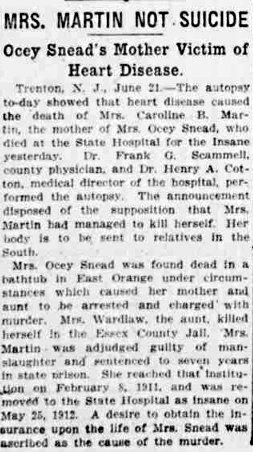 The story included a paragraph captioned “Truth Indeed Strange” which summed up how many must have felt about it: “The history of the famous ‘bath tub’ mystery bears out the old adage that ‘truth is stranger than fiction.’ No more mysterious story was ever revealed within the covers of a novel than what was brought to light by the press and authorities after the finding of Ocey Snead’s body in the bathtub of her home in East Orange, N. J., on November 29, 1909.

Note: All newspaper articles for this blog were found on Chronicling America and Virginia Chronicle.