Truckin’ with the Bill of Rights

Editor’s Note: This post originally appeared in The Delimiter, the Library’s in-house on-line newsletter. It has been slightly edited for clarity.

To commemorate the bicentennial of the Bill of Rights, Philip Morris wanted to finance a major tour of an original copy of the document– the basis for many of our basic freedoms and rights. As the repository of Virginia’s copy of the Bill of Rights, The Virginia State Library and Archives (now the Library of Virginia) was approached and agreed to its use.

Philip Morris funded restoration work on the document and financed the fabrication of both an elaborate traveling case, as well as a display case. Both cases had advanced climatic control and were designed to protect this precious document from any potential harm. In addition to the immediate housing for the document, the design of the display system guaranteed crowd control, as well as allowing adequate viewing of the document by visitors wishing to see the Bill of Rights.

The tour consisted of a 52 city, 50 state tour, commencing in Barre, VT, on 10 October 1990 and winding up with the document’s return home to Richmond on 11 December 1991 (with a grand total of 26,000 miles traveled), culminating in a fundraising dinner and closing of the exhibition on 15 December. The tour was planned to ensure that weather conditions were most favorable in the areas visited – providing additional safety for the priceless document. The odyssey of the Bill of Rights was well documented in the media, but a lesser known aspect of the tour was the actual vehicle which was the immediate system of transport for the document –the BOR STV– Bill of Rights Secure Transport Vehicle. 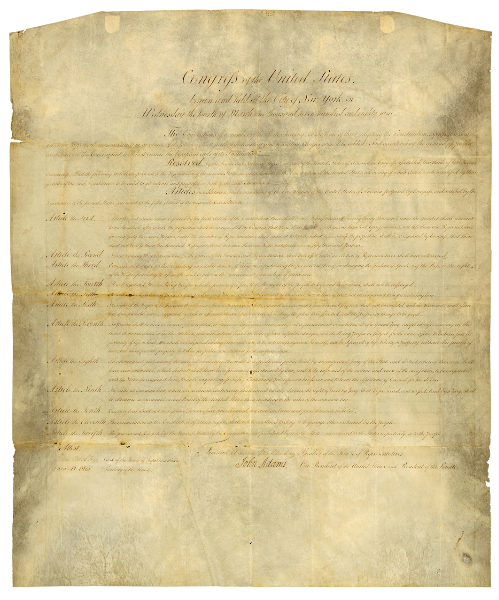 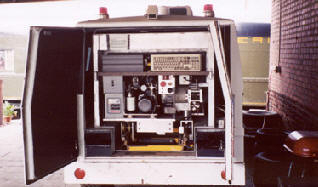 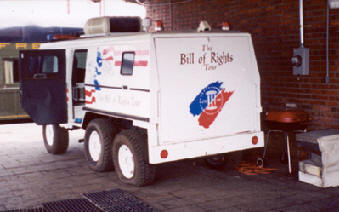 The Secure Transport Vehicle was a reconditioned Ibex 6 wheel drive all-terrain military vehicle. Gun ports were sealed and the turret removed. Additional armor plating was fitted and camera, alarm, siren, and additional lighting systems were added, including two one million candle power lights on the roof. The air conditioning and heating systems were upgraded to ensure the proper climate for the precious cargo– a 5600 BTU heater and a 13500 BTU [initial specifications were modified and 7100 BTU unit was installed] air conditioner were installed. A vault was designed within the vehicle for safe conveyance of the Bill of Rights in its state-of-the-art carrying case. The vehicle weighed close to four tons empty and five and half tons loaded, and was just shy of seven feet in height [excluding the air conditioning system on the roof]. Run flat inserts were included in all the tires. The refitted vehicle was designed to be as impregnable to attack or mishap as possible. The main purpose of the STV, despite the precautions taken, was primarily ceremonial. It was used for parades and final transport to viewing destination in each city. The whole vehicle and its precious cargo were transported over long distances within other transportation modes fitted to house the STV.

After the tour, the Bill of Rights was returned to the Library vault and the STV was given to the Virginia State Library and Archives. The vehicle was parked at the Byrd Center– a commercial property then used for filming and storing microfilm. The vehicle later was given to the Virginia Museum of Transportation in Roanoke– its engine having been removed to prevent its use. The photographs show the STV at the Museum of Transportation circa 2010.